Arbroath made a winning start to their League Cup campaign whilst this match marks the first of the season for East Fife. Can Arbroath keep their winning start going? Find out with our Arbroath vs East Fife match preview with free tips, predictions and odds mentioned along the way.

Arbroath vs East Fife: Our predictions

The winning start continues for Arbroath

Arbroath's form had been pretty poor heading into their season opener a few days ago but their win over Elgin would have given them a welcome shot of confidence after just two wins in 12. Of course, Arbroath's matches were predominantly from Championship ties; East Fife are a league lower than that and hardly boast a terrific run of form themselves with four wins in 10 matches. Arbroath also have the advantage of having played a competitive games; it will make a difference having that 90 minutes in their legs and we expect them to win again here.

A tight game that will be tied at the interval

Our first prediction backs Arbroath to win. That's true of this tip too but we don't see them running away with the game. None of the last three meetings between the pair have shown a huge gulf in quality and if Arbroath's win over Elgin is anything to go by then they're not about to blow anyone away. East Fife will know they have half a chance in this game if they can hang on for a while. We expect them to keep it tight until superior quality and fresh legs eventually shine through.

There will be more goals in the second half

If we were being lazy, we'd encourage you to read the above prediction again. We won't do that. A lot of what we've said is true though. It's hard to see either side smashing in goal after goal in the opening 45. East Fife will know an early goal against will be a horrendous start whilst Arbroath will be thinking they can control the ball, put miles on the East Fife clock before winning the game in the second period.

All your key stats for Arbroath vs East Fife

Another hard fought win for Arbroath

Arbroath haven't been in good form of late and that means any win they come by is a) welcome but, more importantly, b) not straight forward. Elgin proved that last time out as they needed a late goal and they'll need more of the same ‘never give in' attitude here. Tom O'Brien will play an important role at the back to ensure they keep moving the ball and players like David Gold will be asked to provide the touch of class. For East Fife, they won't win this match without a good defensive display. That means Scott Gallacher in between the sticks will need to be on form with Scott Mercer, Chris Higgins and Ross Dunlop all coming under the spotlight. 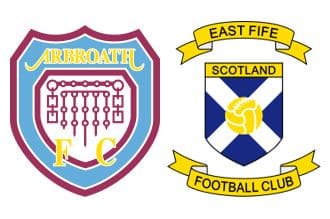