The long-term successor to David Silva was supposed to be Phil Foden. The 19-year-old has been exposed to more first-team football this season, Silva’s last in Manchester, and it felt as though the torch was, slowly, being passed.

Pep Guardiola singled the academy graduate out for praise recently.

“If we didn’t believe in him [Foden] we might go to the market to replace David [Silva], but we have Phil. He is the guy who is going to take his [Silva’s] minutes or maybe he has to fight with Kevin [De Bruyne], Gundo [Ilkay Gündogan] and Bernardo [Silva]. It’s the only way to maintain the level as high as possible [this competition].

“The way Phil has played has been incredible. I think he has played well and [had] enough minutes, but if we have many, many injuries in that position he will play more minutes [this season], we know that.”

However, despite the public backing of his manager, Foden might not be the next in line to Silva’s throne. According to Calciomercato, the Premier League champions are in pole position to sign Lyon maestro Houssem Aouar.

The 21-year-old is rumoured to be a transfer target for Manchester United and Liverpool but reports in Italy claim Manchester City are leading the way for the France under-21 international.

The Citizens are no stranger to Aouar having faced him in the Champions League. In fact, Guardiola reserved special praise for the fleet-footed midfielder.

“Houssem Aouar is a very good player, he is incredible. We talk a lot about [Tanguy] Ndombele, but Aouar is also excellent. He’s always very calm with the ball at his feet, with excellent technical quality.” 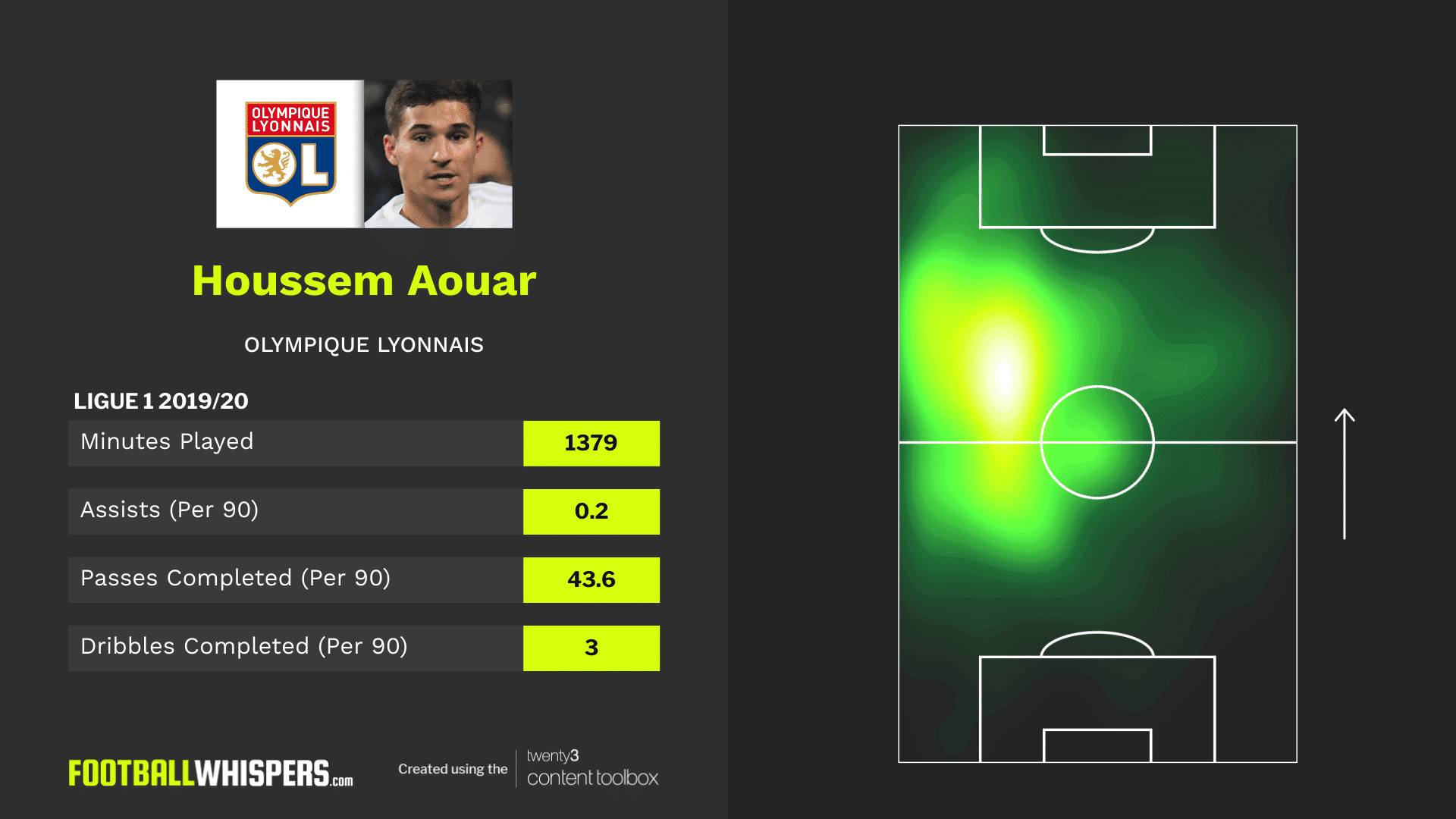 The former Barcelona tactician knows a thing or two about midfielders. So when he praises one, it’s wise to take note.

The Lyon No.8 oozes class. Initially, it was his build-up play which caught the eye. He’s comfortable carrying the ball. He’s got the vision and the ability to execute passes to disrupt defensive lines. He’s progressive and incisive.

But with Nabil Fekir tipped to leave the Groupama Stadium, Aouar went about developing his final third game so he was better equipped to replace the World Cup winner when he did eventually part ways with OL.

The 2017/18 campaign saw him finish with six goals and five assists. A solid return for a midfielder without the aid of penalties. The following season, that increased as he recorded 14 goal involvements in Ligue 1, split evenly between goals and assists.

The 2019/20 campaign has been a transitional one for Lyon and Aouar has failed to build on those numbers. Coach Bruno Génésio was replaced in the summer with former player, and free-kick extraordinaire, Juninho coming in as sporting director.

He appointed one-time Arsenal left-back Sylvinho as manager and this was supposed to usher in a new era. After a poor start, Rudi Garcia was drafted in to replace the former Brazil international. Lyon have climbed the table but they’re still adapting and this is having a negative impact on some players.

Aouar, for example, has just five goal involvements in 17 Ligue 1 appearances. Last season the 21-year-old had a per-90 goal average of 0.21. This year that figure is down at 0.13. It may not seem like much but a difference of three goals, especially for a midfielder, is significant.

Managerial and tactical changes, coupled with his inexperience, have resulted in a couple of patchy performances with some wasteful finishes. But players of that age are often inconsistent so it shouldn’t be enough to put potential buyers off. And if reports are accurate, it hasn’t.

Foden will still have a big part to play for this City side over the next couple of years but a role as understudy to Aouar could be beneficial to both the youngster and Guardiola's side in general.

Learning from Silva, Bernardo Silva, Kevin De Bruyne, İlkay Gündoğan and Aouar could make him one of the most well-rounded midfielders in the world. But the Etihad isn't a finishing school, simply replacing Silva with Foden might be a step too far for the youngster. The Frenchman could act as the middle man in the line of succession.