Ole Gunnar Solskjær has breathed new life into many of his Manchester United players but Antonio Valencia has so far eluded the Norwegian's magic touch.

The Ecuadorian, who has been plagued by injuries for most his captaincy having been appointed last summer following Michael Carrick's retirement, doesn't seem to figure in Solskjær's plans.

Today (Friday, March 1) marks the last day United can trigger the one-year extension in Valencia's contract. With that looking unlikely, his ten-year association with the Red Devils looks to be drawing to a close.

It is the right move, though. Valencia will be 34 in the summer. Some players –like Ashley Young, for example, who is a few weeks older than the South American – can still perform at the level required for a club such as United but it's clear Valencia is fighting a losing battle against his body.

Then again, his injury history is extraordinary. Since joining United in 2009, he has missed 547 days through injury, as per Transfermarkt. He has appeared only sporadically this season. After a regular run from August to the start of October, he has featured only three times and has been out of the picture since the 2-0 win at Newcastle United.

Valencia has never been quite himself since suffering a horror injury against Rangers in the Champions League in September 2010, Kirk Broadfoot's challenge left the winger with a broken leg and a dislocated ankle and kept him out for six months.

Since then, he has endured all manner of knocks and niggles. Although reinvented at right-back, Valencia lost that electrifying burst of pace which struck terror into the hearts of defenders when he was at Wigan Athletic.

Still attack-minded by nature, Valencia offered flickers of his former self from right-back but it's difficult, now, to imagine a regular role for him in United's future, regardless of whether Solskjær remains in charge beyond the summer.

But while the hugely popular former striker is heavily tipped to get the job on a permanent basis, Valencia's Old Trafford adventure will surely conclude when his contract expires at the end of June. 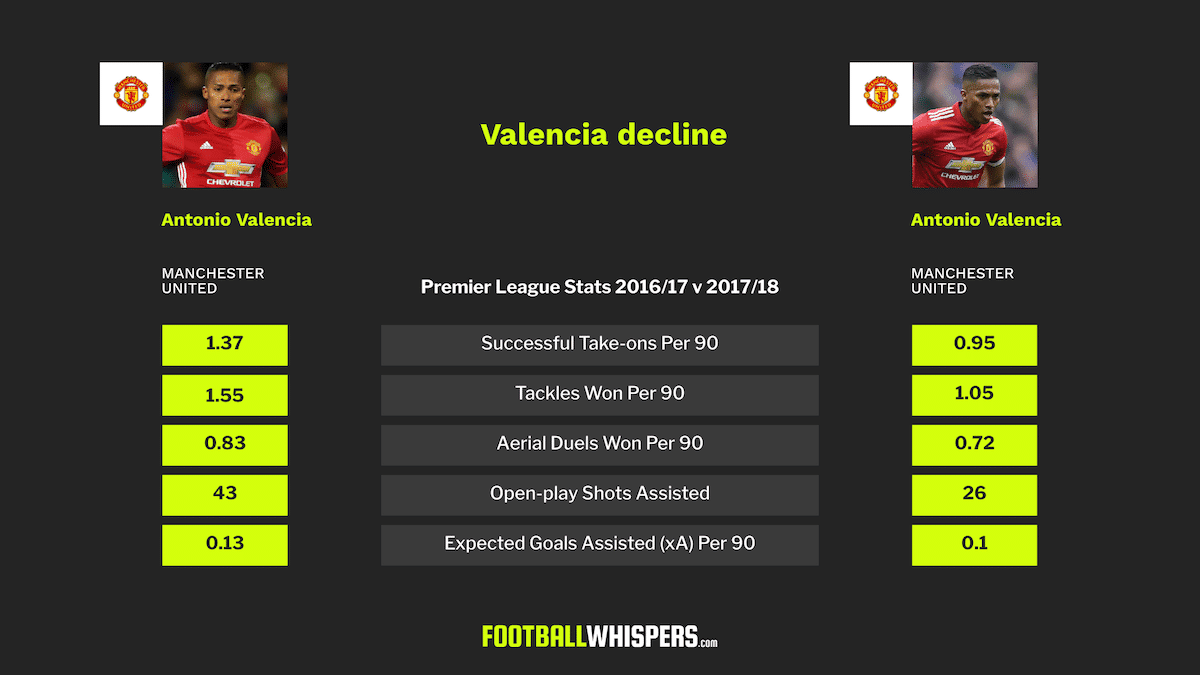 A fantastic servant to the club, having made 338 appearances, won two Premier League titles and captained his side to Europa League success, it does not have to be bad news for United.

Young remains a dependable right-back while in Diogo Dalot, United have a raw but undeniably talented teenager, one who, if nurtured and coached correctly, can become a mainstay in the defence in the years ahead.

United are right to prioritise extending David de Gea's contract. Ander Herrera is another who deserves a new deal but it looks as though Valencia will be seeking new employment come the summer.