There will be no documentary this year, folks.

Yes, 12 months after releasing an hour-long feature on his decision to rebuff Barcelona's interest and pledge his allegiance to Atlético Madrid, Antoine Griezmann has had a change of heart.

The Frenchman, Atleti's star man since arriving from Real Sociedad in 2014, has decided his future lies elsewhere. At 28, he is keen to embark on a new challenge, with a league title and the Champions League key pieces of silverware missing from his trophy cabinet.

Given heavy speculation, many assume that means he'll move to Barcelona. The Catalans, who have already secured the signature of Frenkie de Jong – with Matthijs de Ligt tipped to follow – chased Griezmann last summer before he signed a contract extension in June.

Reports this week have suggested that Barça are still willing to trigger the forward's £108million release clause. However, Gerard Romero, considered one of the most reliable sources for Barcelona news, claims there is no agreement and, with Paris Saint-Germain and Premier League sides also interested, Griezmann's arrival at the Camp Nou is far from a foregone conclusion.

With this intriguing new nugget of information, we've analysed the various possible destinations for Griezmann.

Barça are thought to be the clear frontrunners – and they're obviously a very attractive destination.

Firstly, the possibility of playing alongside Lionel Messi is enough to excite any professional footballer.

More pertinently, though, Griezmann could slot comfortably in a 4-3-3, either on the wing or as the centre forward to provide stiff competition for the ageing Luis Suárez.

At Atlético, the World Cup winner has largely been deployed up front in Diego Simeone's 4-4-2 but his tactical flexibility has allowed him to drop into wider positions to help with the team's pressing.

Griezmann's arrival at the La Liga champions would likely lead to Philippe Coutinho's departure. The Brazilian has struggled to maintain the standard which convinced Barça to fork up £142million for his services.

Ernesto Valverde has often deployed the former Liverpool man on the left wing in his 4-3-3. That is a role Griezmann could comfortably fill. Alternatively, when Ousmane Dembélé is fit, Griezmann can shift into the middle with his compatriot on the left.

Griezmann could also play out wide with Messi playing as the second striker to Suárez. Given his quality and versatility, finding a place shouldn't be a problem.

As ever, the French giants are a factor, and there are a number of factors working in their favour.

Firstly, they have the financial muscle to meet both Griezmann's release clause and wage demands, especially if they are able to offload Adrien Rabiot, Edinson Cavani and Julian Draxler, all of whom have been linked with moves away.

In fact, with Griezmann's departure filling a substantial hole in the Atleti attack, there is a chance PSG would look to use Cavani as a makeweight in any potential deal. Although he is 32, the Uruguayan remains one of the deadliest finishers in Europe; 22 goals in 29 appearances this term certainly attests to that.

Moving to PSG would see Griezmann linking up with his compatriot Kylian Mbappé and Brazilian superstar Neymar. Replacing Cavani would make for an enormously fearsome trident; one, you feel, will help PSG in their quest for Champions League glory.

Barcelona seem to have the edge on their counterparts but given PSG's proven track record of getting huge deals over the line, you can never fully discount them.

Some have suggested that the turning point for Griezmann was Atlético's Champions League elimination at the hands of Juventus in March.

While Turin hasn't been touted as a possible destination as much as Barcelona or Paris, with uncertainty over the futures of Douglas Costa and Paulo Dybala, the Italian champions may find themselves with space for a high-profile recruit in the next few weeks. 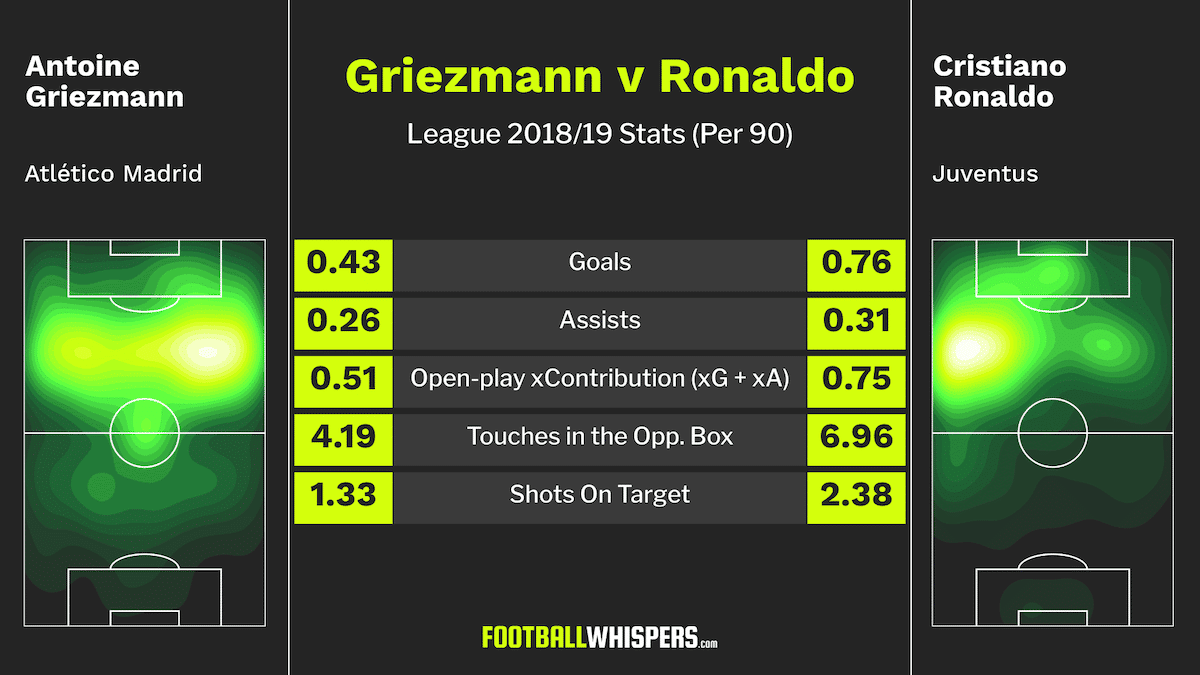 Signing Cristiano Ronaldo didn't land the European Cup at the first attempt for Juve but, with the added firepower of Griezmann, the Bianconeri's Champions League dream would be significantly bolstered.

Although Moise Kean has shown great promise over the second half of this season, Massimiliano Allegri would be excused for coveting a more established goalscorer as he looks to secure Juve's first Champions League since 1996.

According to Gerard Romero, Premier League clubs are in the running and City, you'd assume, would be among the chasing pack.

The newly-crowned Premier League champions are a hugely attractive project; they have Pep Guardiola managing them, boast a squad brimming with quality and play wonderful, attacking football.

The one major caveat, of course, is their future in Europe. This week, the New York Times claimed that City are facing a possible one-season ban from the Champions League for breaching UEFA's Financial Fair Play regulations.

City strongly deny such claims but, with the investigation ongoing, Griezmann may not view the Etihad as the right move given his thirst to become a Champions League winner.

That would almost certainly rule out Manchester United then. The Red Devils have flexed their financial might in recent transfer windows but face a period of uncertainty during Ole Gunnar Solskjær's first full season at the helm.

Out of the Champions League, the Norwegian is anticipating a mass overhaul of his squad as he looks to re-establish his beloved club as a Premier League force.

29 next season and despite the possibility of a bumper contract at Old Trafford, Griezmann is likely to view United as a move fraught with risk. 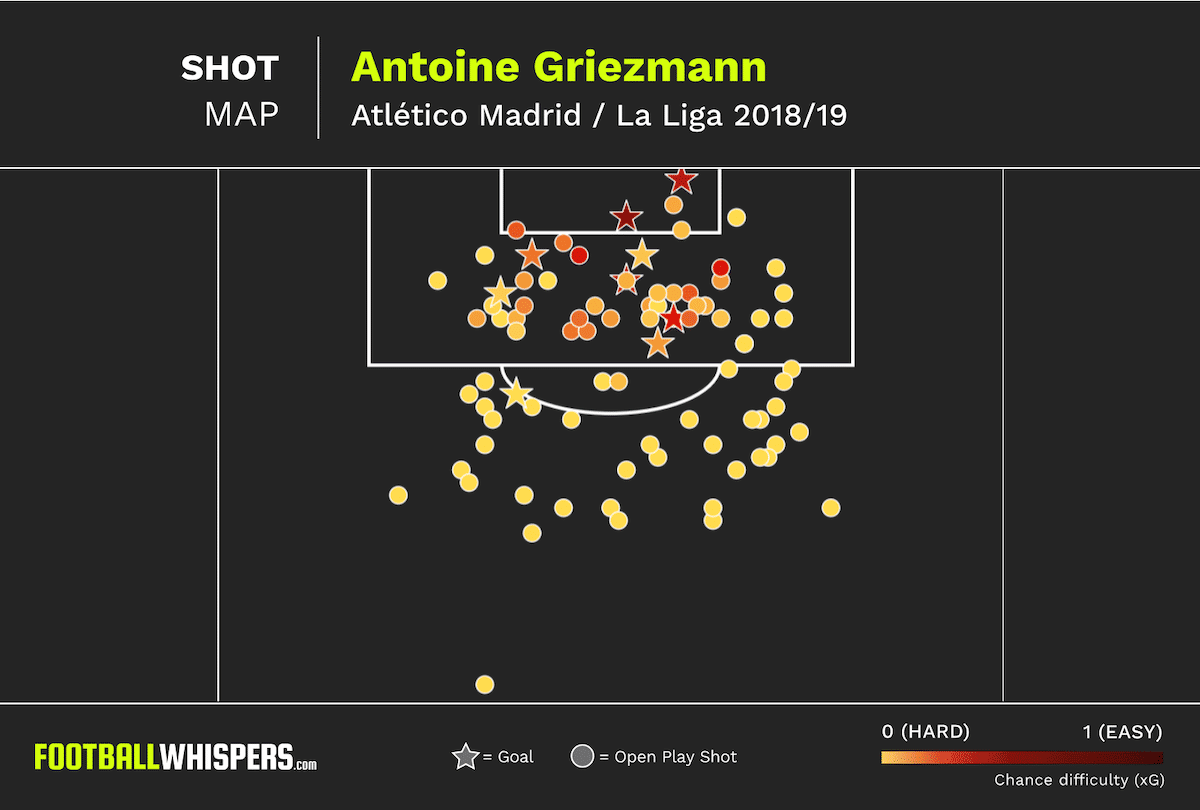 United would obviously love to sign a player of his profile. A wonderfully rounded attacker with a stellar goalscoring record (133 in 256 for Atleti), Griezmann is precisely the kind of finished article required to headline Solskjær's rebuild.

However, try as they may, United may have to accept that their pulling power in the transfer market is on the wane and their position would be weakened further if Paul Pogba – an international teammate and friend of Griezmann, of course – departs for Real Madrid.

Jürgen Klopp's Reds would offer Griezmann the chance to become a Premier League and European champion but it's unlikely that they will challenge Barcelona's interest.

For one, they are already well-stocked in the striking department with Mohamed Salah, Sadio Mané and Roberto Firmino all at the peak of their respective careers.

In addition, Liverpool don't tend to plump for players over the age of 27. Firmino, Mané and Salah were 23, 24, 25 respectively when they joined, while last summer, Alisson, Naby Keïta, Fabinho and Xherdan Shaqiri – all 26 or younger – arrived.

Despite his obvious qualities, Griezmann does not fit Liverpool's typical age profile. They are likely to pursue other targets.

Bayern are launching an almighty assault on this summer's transfer window. The Bavarians have already tied up deals for Benjamin Pavard and Lucas Hernández, Griezmann's fellow countryman and Atleti teammate respectively, totalling in excess of £100million.

Determined to return to the top of the European game, they may be tempted now that Griezmann is on the market.

Robert Lewandowski is still scoring with impressive regularity but the German club's chiefs may see Griezmann as the missing piece of the puzzle; another deadly penalty box player who can shoulder some of the goalscoring burden.

With uncertainty over Niko Kovač's future, though, Griezmann may prefer a move to a more settled project like Barcelona or PSG.