There is plenty of uncertainty at West Ham United ahead of the summer but one thing is for sure. A striker will be top of the Hammers' wish-list regardless of who is manager at the London Stadium next season.

Slaven Bilić's future in Stratford is unclear. But the Hammers' striking woes are well known. Five forwards were signed last summer. Ashley Fletcher, Toni Martinez and Jonathan Calleri were brought in with an eye on the future.

But far more was expected of Simone Zaza, signed on loan from Italian giants Juventus and sent back to Turin in January, and Swansea City forward André Ayew.

Those mistakes have left the injury-prone Andy Carroll – just 52 Premier League starts in the four seasons since joining the club – as the only striker Bilić can rely on.

To that end, West Ham have been linked by Bild with moves for Köln striker Anthony Modeste and Borussia Dortmund transfer target Bobby Wood who is already in talks with current club Hamburg over a contract extension.

We look at what the duo would bring to the London Stadium and whether they would be good fits for the Hammers next season. 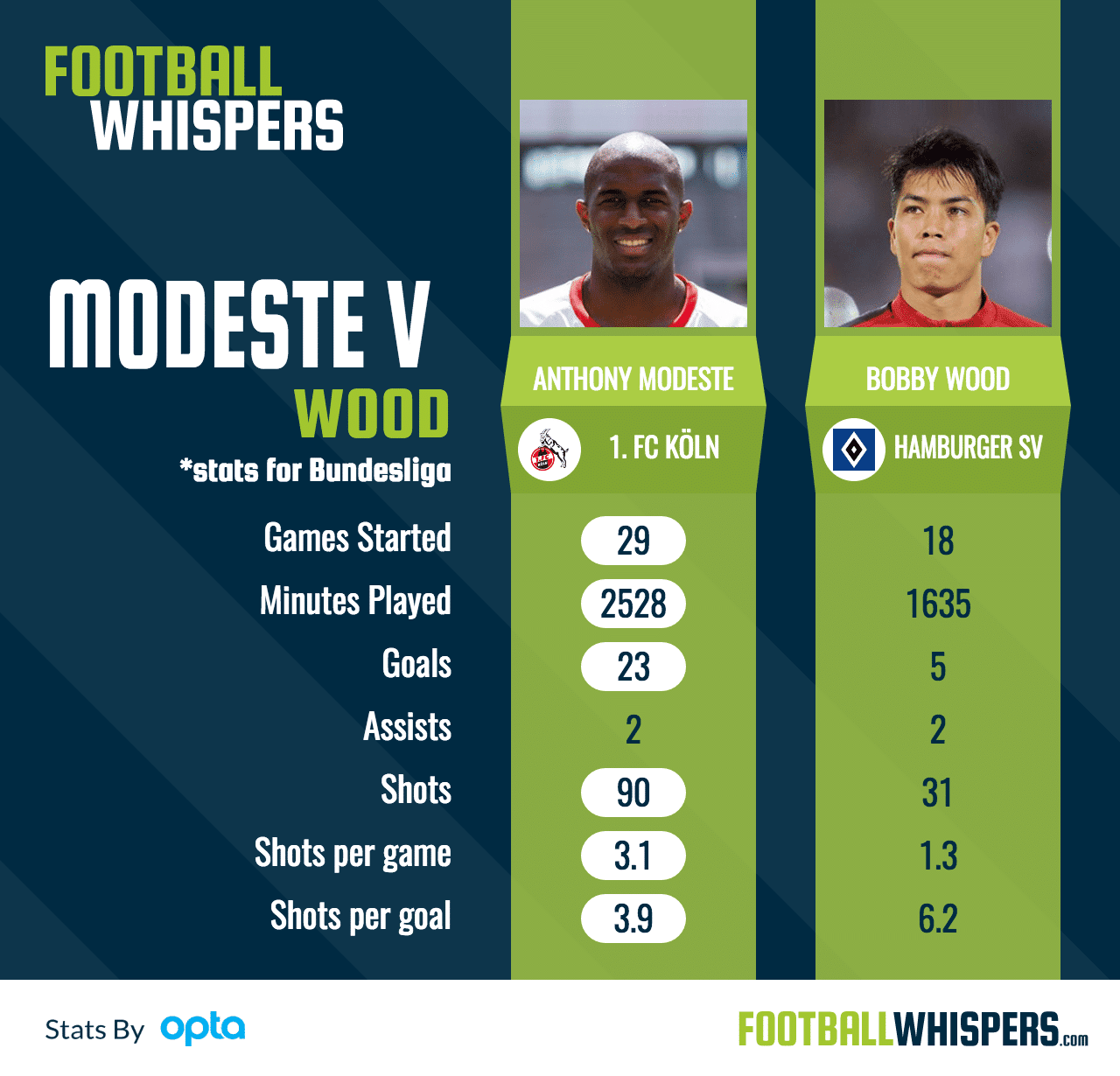 To supporters based in England the news that Modeste has flourished to become one of the most prolific strikers in the Bundesliga will come as something of a surprise.

That's because the 29-year-old has already had a crack at the Premier League with Blackburn Rovers. He joined on loan from Bordeaux for the 2011/12 season but failed to score in nine outings as Rovers were relegated to the Championship.

The following season Modeste bagged 15 goals on loan at Bastia and earned a move to the Bundesliga, joining Hoffenheim. Three seasons with the village side preceded a move to Köln. It was there that things really took off for the Frenchman who has bagged 38 goals in two seasons.

Despite blooming relatively late – Modeste turned 29 last week – the forward's form in the last few seasons has attracted interest from the Premier League once more after five years away.What would he bring to West Ham's forward line apart from goals?

One of the most impressive parts of Modeste's repertoire is his ability to score all kinds of goals. In the still below, with Köln trailing Schalke, Modeste holds his run to wait for a defence-splitting pass between the visitors' right-back and centre-back. 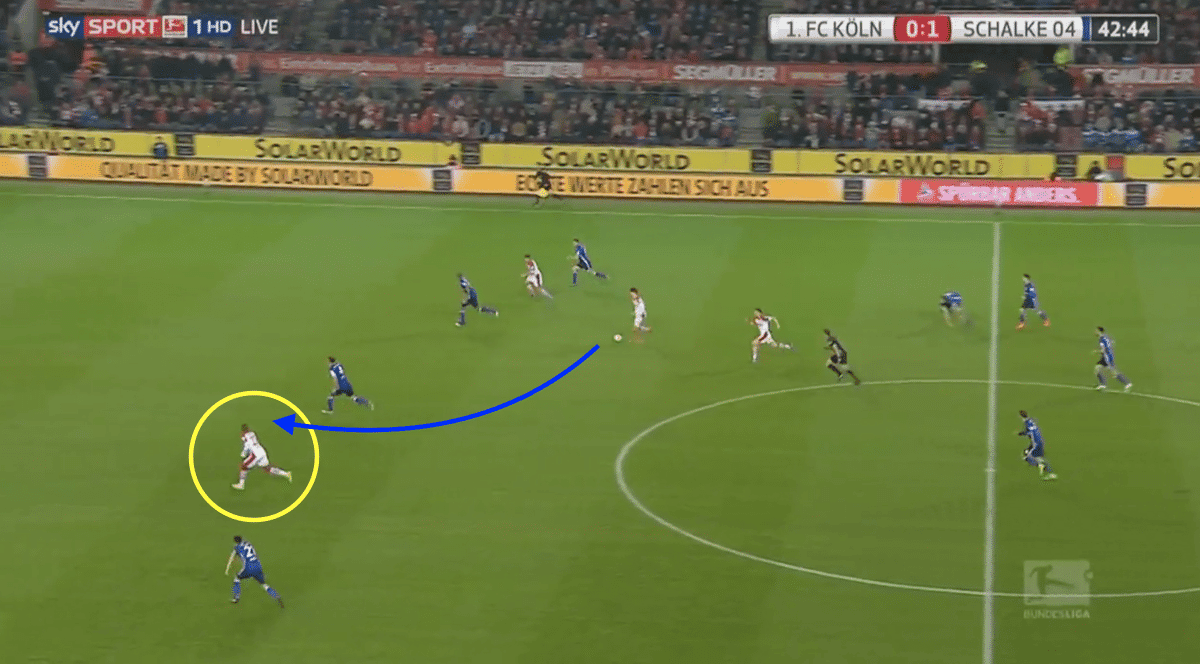 The ball comes. He opens up his body, uses the defender as a shield – leaving t he keeper short sighted – and curls a sumptuous finish into the bottom corner of the net. 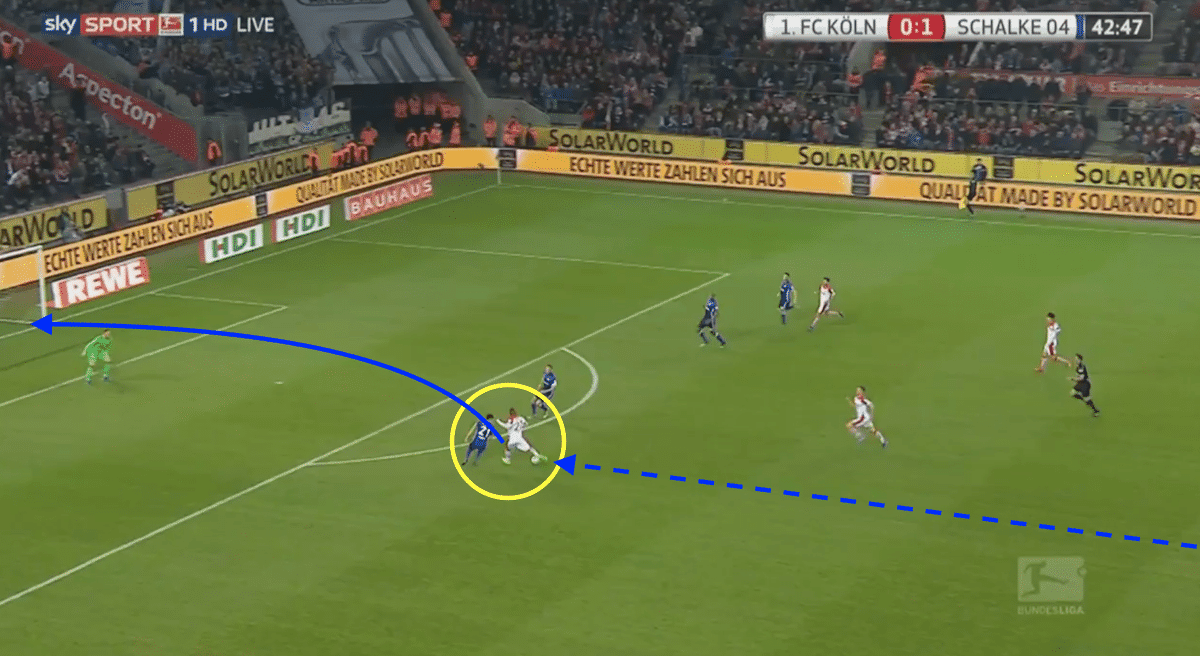 In the next still, against Wood's Hamburg side, Modeste peels off the visitors' centre-back in anticipation of a cross in from the left-hand side. 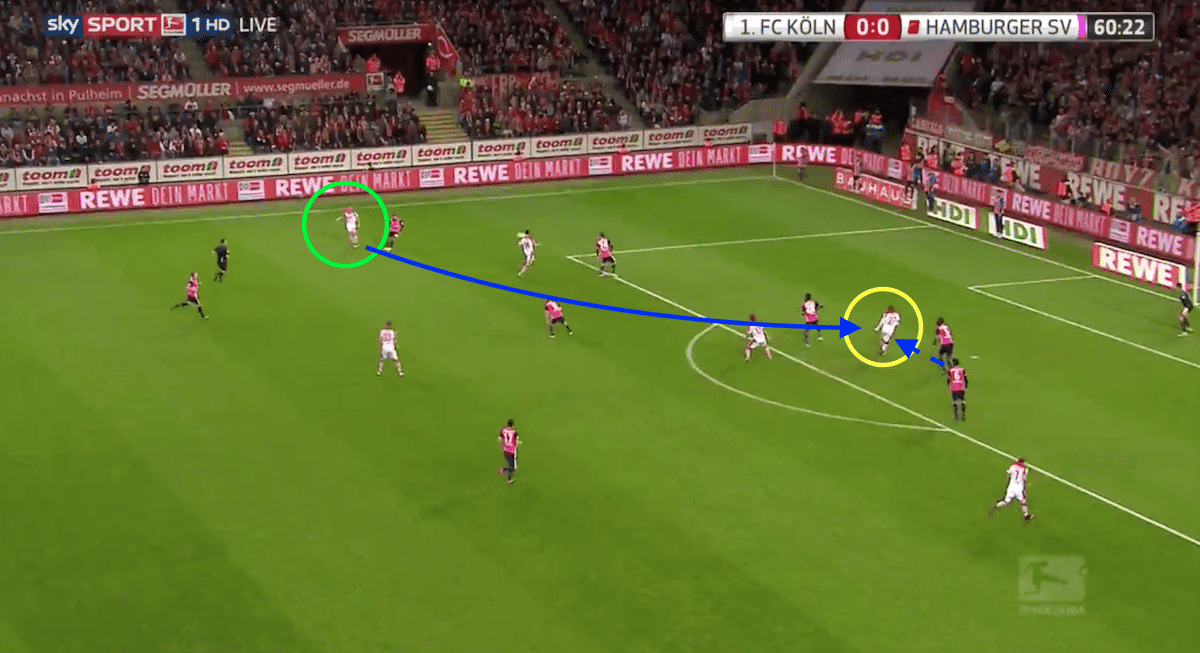 The delivery is good and, even though the Hamburg centre-back follows him, Modeste is free to get the all-important touch beyond keeper Rene Adler to give Köln the lead. 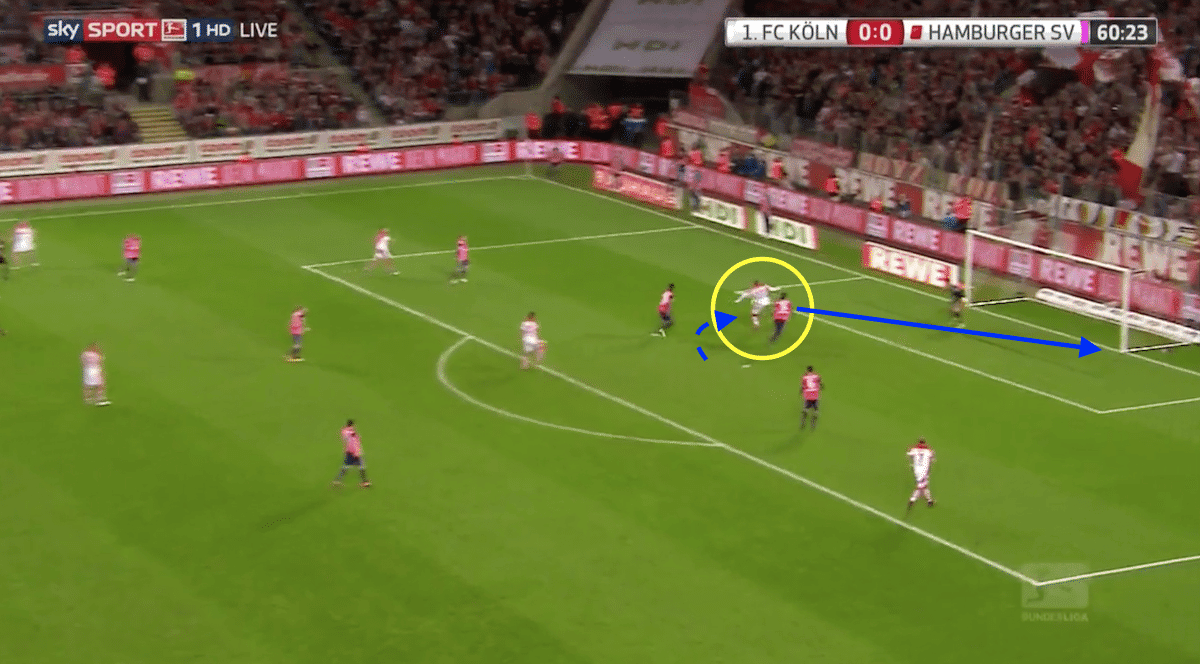 Unsurprisingly, given his 6ft 2ins frame and strapping physique, Modeste is strong in the air. In the image below, against Hamburg, he shows great awareness and desire to get in front of his marker and power a header past Adler. 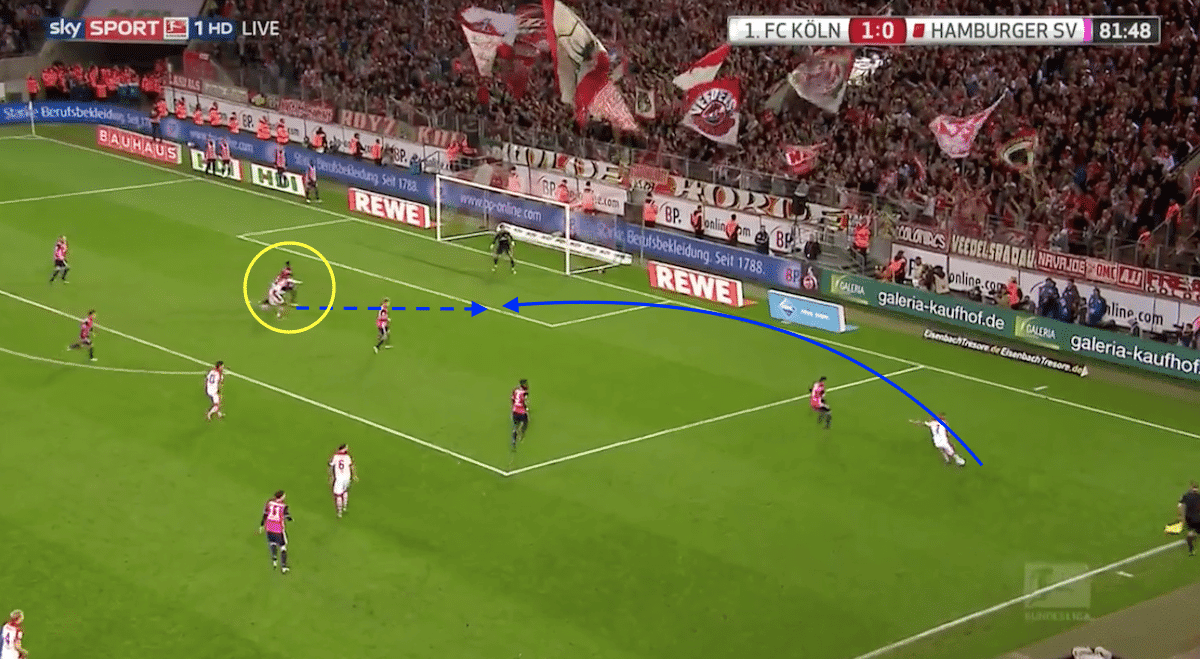 But there is more to Modeste than just his finishing. In the still below, from a draw against Bayer Leverkusen, the forward holds the ball up before seeing an overlap on the right-hand side. He spreads the play with a perfectly-weighted pass to find a team-mate in space. 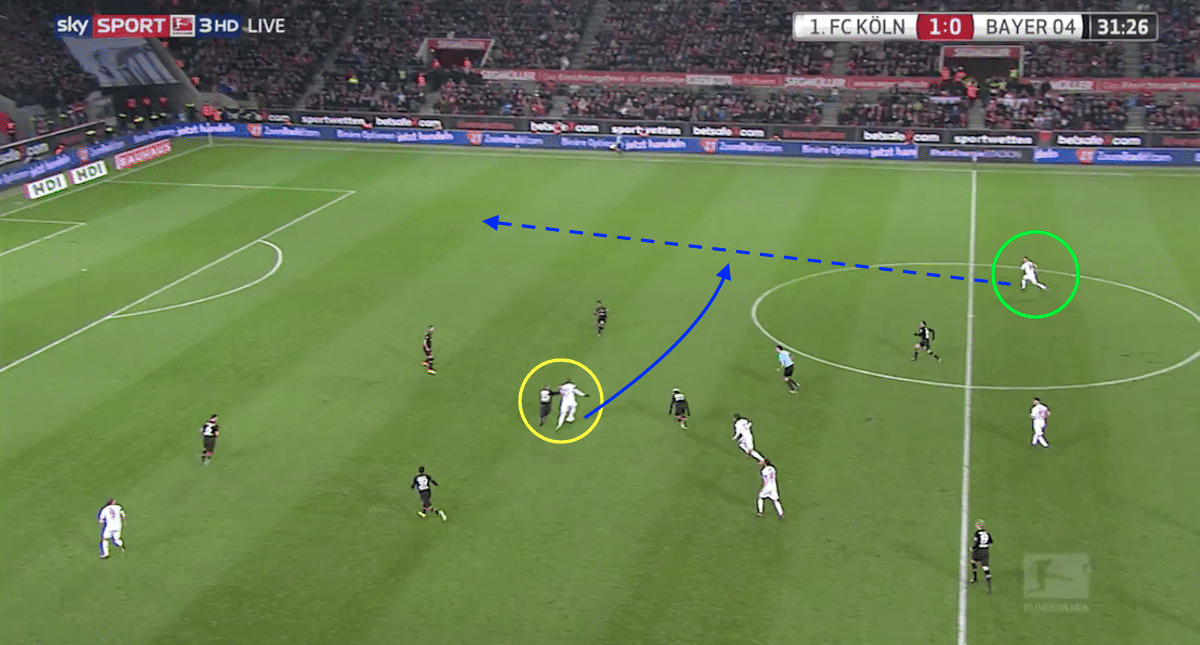 Köln tend to play in a 4-4-2 system with Yuya Osako partnering Modeste up front. However, owing to his size and physical attributes it would not be a stretch to imagine the Frenchman up front on his own.

Born in Cannes, a city famous for its film festival, some of Modeste's strikes have been blockbuster. His ability to conjure something up out of relatively little would make playing at the top of the Hammers' 4-2-3-1 system second nature to the forward.

At 24 Wood is, of the two, the option with an eye on the future. Born in Hawaii, the USA international has not been as prolific as Modeste in the Bundesliga.

But he showed goalscoring promise in the second tier last season by netting 17 from 31 appearances for Union Berlin – enough to persuade Hamburg to part with €3million last summer.

Wood has scored just five times in the league this season. But in Hamburg's 4-2-3-1 system, and with Lewis Holtby, Aaron Hunt and Filip Kostić behind him, the American is charged with holding the ball up to bring others into play.

Standing at 5ft 10ins tall, Wood is not your archetypal targetman. Yet with his strength, tenacity, pace and work-rate he makes the ideal line leader for Hamburg and that is why his role is about more than scoring goals.

In the still below, against Hoffenheim, Wood uses his body well to hold off the defender. All three attacking midfield options (circled in red) are around him. 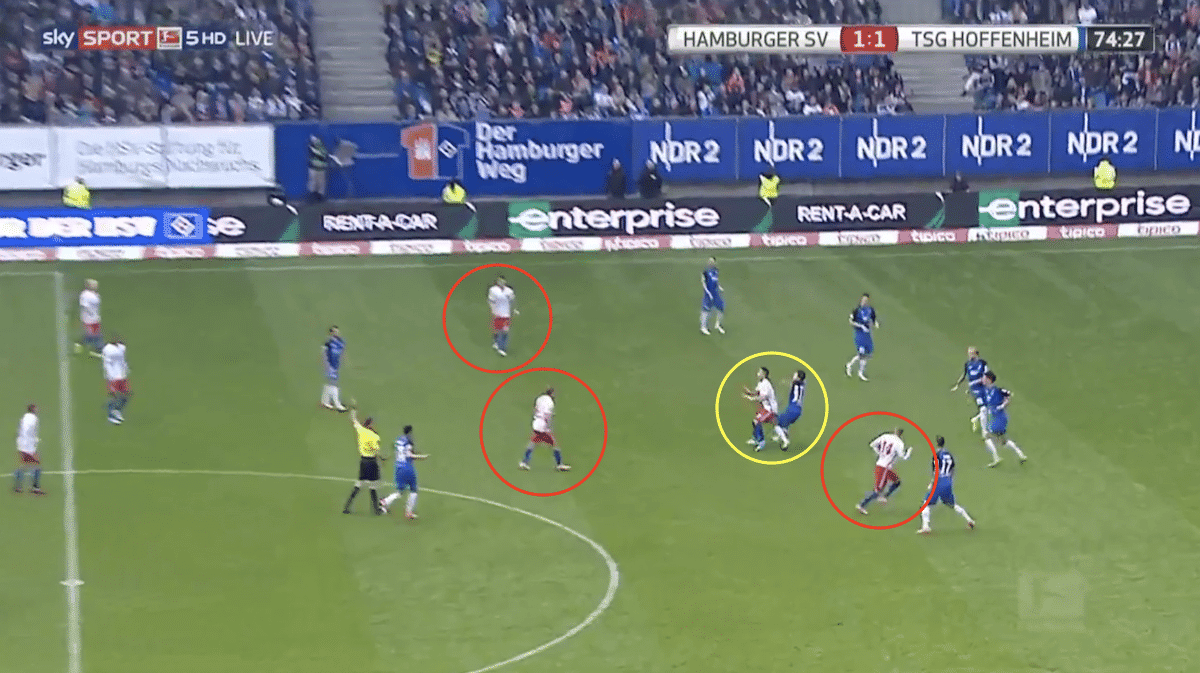 Having won the aerial ball Wood lays it off to Holtby before spinning his grounded marker and driving into space to receive the pass from the former Tottenham Hotspur man. 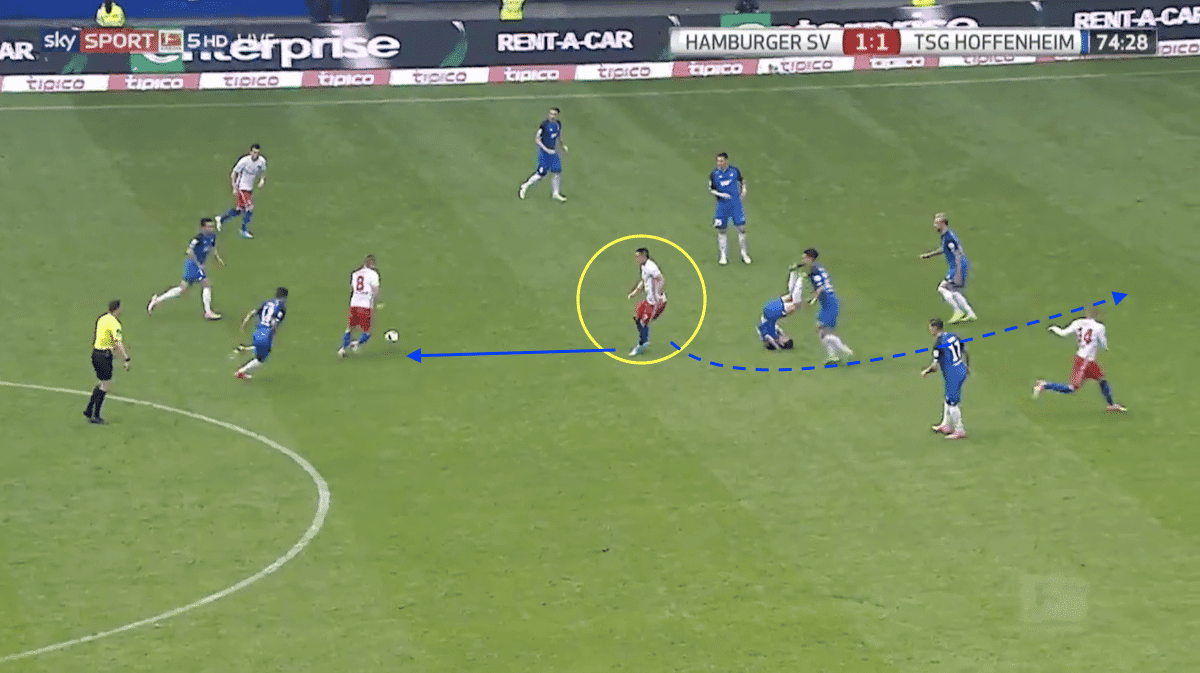 READ MORE: WHY WEST HAM SHOULD SHOP IN THE CHAMPIONSHIP THIS SUMMER

Wood goes through and squares the ball to Hunt (14) who has the simple job of tapping into the empty net – with keeper Christian Mathenia already committed – and winning the game.

Earlier in the same fixture Wood played a big part in Hamburg's equaliser. In the first image you see the forward again using his body well to hold off his marker and bring the ball out of the sky. 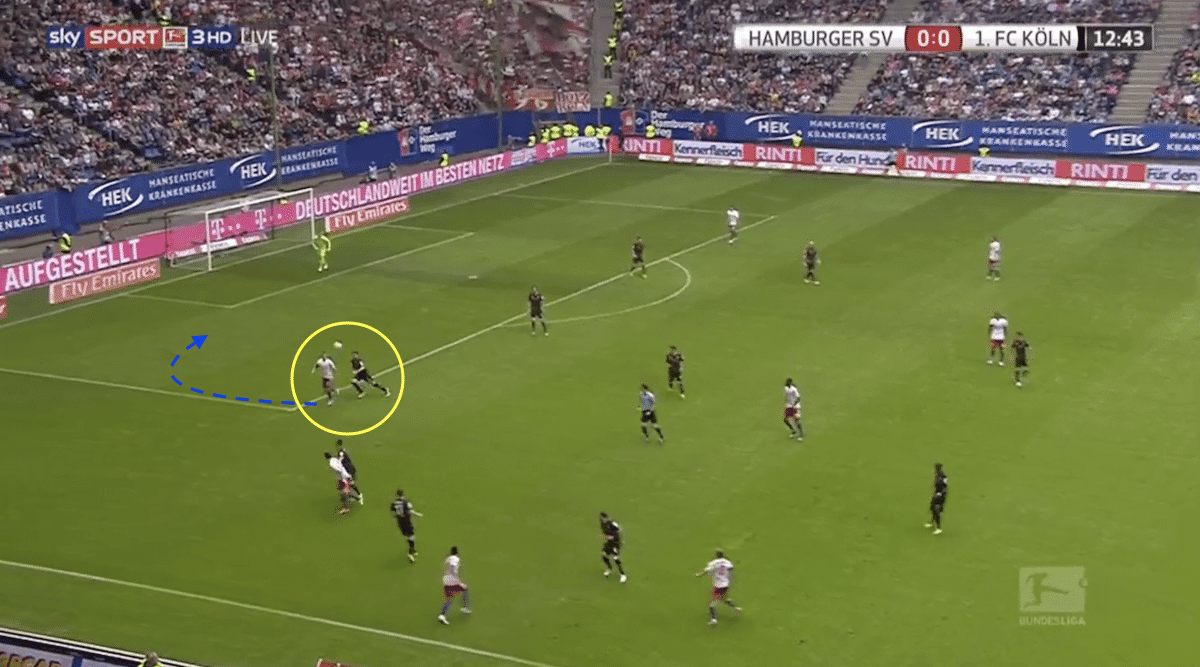 Having spun his marker Wood drives into the penalty area. Hamburg get a bit lucky as the ball breaks loose for Hunt to prod home from close range. But it is Wood's tireless running and tenacity which gets the hosts into that position. 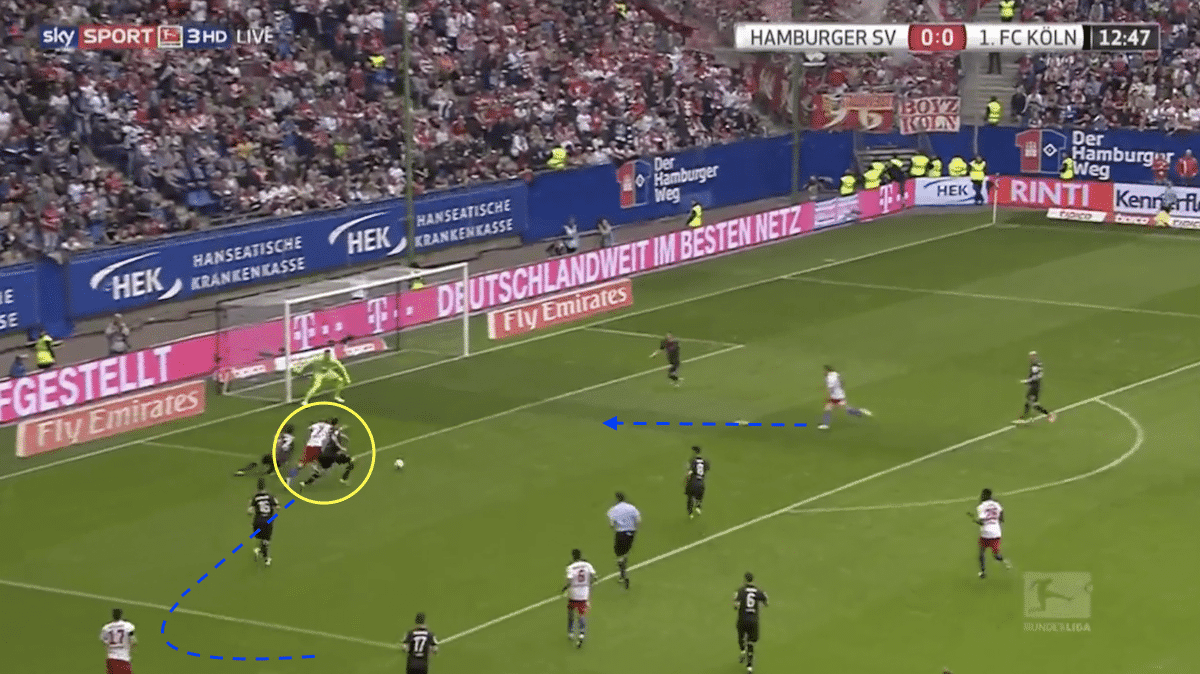 Prospective strikers tend to be judged on their output in terms of goals, chiefly, and assists. In Wood's case those numbers do not make particularly impressive reading. But his game is about so much more and he is often that man involved earlier in the move or making space for those around him to flourish.

West Ham are unlikely to sign both players. But they are very different types of forwards. It's now a decision for whoever is manager at the London Stadium next season as to what kind of striker they require.