Under Sam Allardyce Everton were supposed to become a stronger, well-organised, impenetrable unit. So after going 1-0 up against Burnley at the weekend, you would expect a team under his guidance to hold strong and prove difficult to beat.

They weren’t, however, and lost the contest 2-1. Sean Dyche and his team deserve credit. The Clarets had nothing to lose, so pushed forward at will.

Everton pair Ashley Williams and Michael Keane couldn’t hold firm and the Lancashire side struck twice before the former saw red in the 86th minute.

That pointless dismissal means Big Sam is running out of options at the back. Eliaquim Mangala, signed on loan from Manchester City, picked up an injury after just two league appearances and could be out for the season.

Phil Jagielka, meanwhile has been left out of the 18-man squad for the Toffees last three fixtures, although he might be brought in from the cold now the Welsh international faces a three-game suspension.

Luckily for the Merseyside club, Ramiro Funes Mori returned to action mid-week. He completed 90 minutes for the Under-23s and the Argentine defender is keen to be included in the squad for the weekend’s fixture with Brighton & Hove Albion.

“The Under-23s are good lads and they are very good players. To be part of the Under-23s you have to show respect,” Funes Mori said after they beat Swansea 2-0 on Tuesday.

“I have to give my best for the respect of [David Unsworth] and all the staff, and do my best to show that I can play for the first team.”

Although he featured in the Premier League 2 fixture against Arsenal earlier in the month, this was the first time the 27-year-old had played 90 minutes since March last year.

“I’ve been training well these past weeks. Even though I wasn’t playing for the first team, I’ve been playing for the Under-23s to get the rhythm, get the tempo. I’m 100-per-cent fit to play and I’m ready for Saturday.”

Despite his lack of minutes on the pitch, the centre-back is regarded highly at international level and Argentina coach Jorge Sampaoli selected him in his most-recent squad.

And breaking down his numbers from last season, if match-fit, the 27-year-old is ready to contribute to this Everton defence and could be the partner Keane needs to finish strong over the last ten fixtures.

What Funes Mori brings to the defence 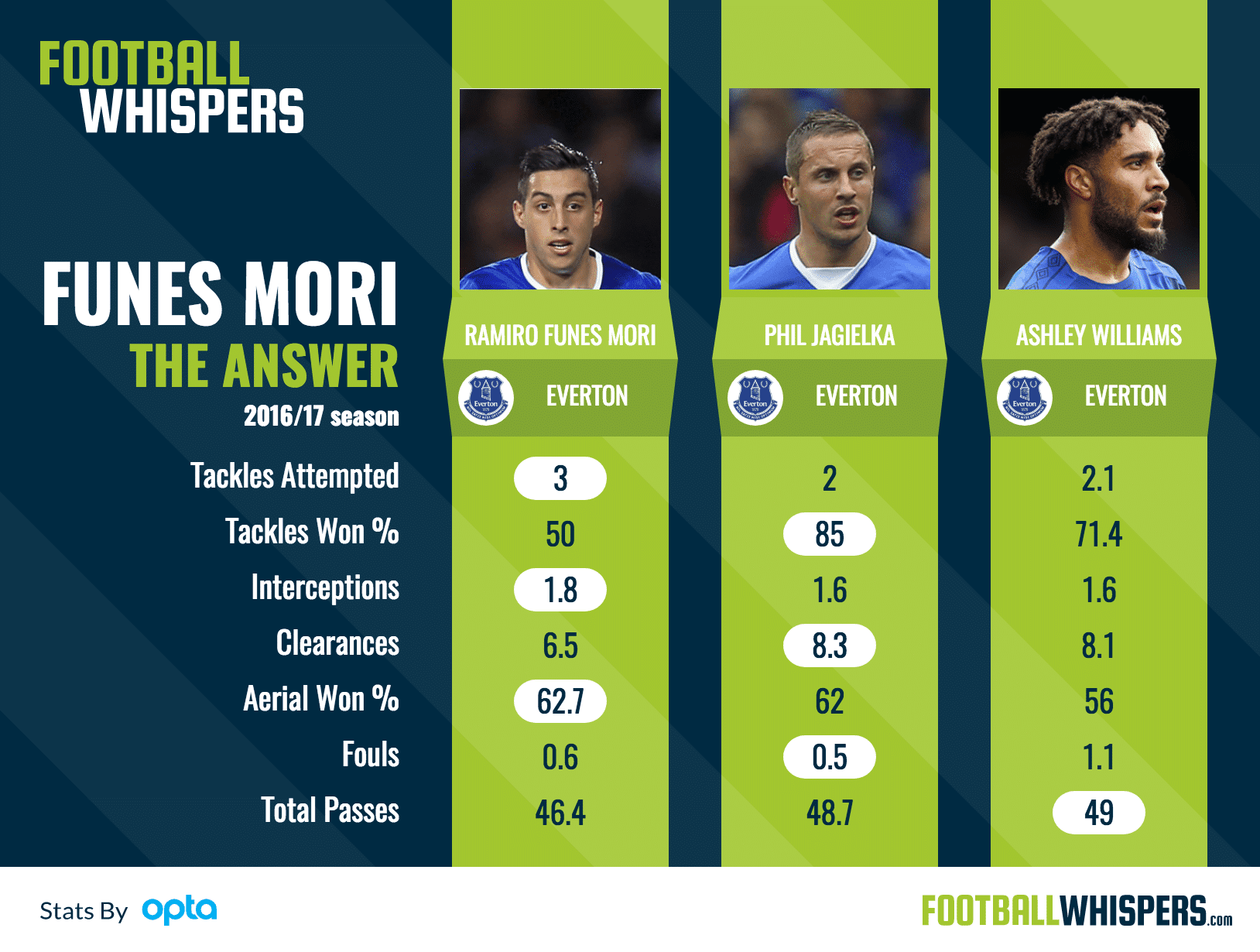 The Argentine ended last season with 16 starts and over 1500 minutes of action in the Premier League. Per 90 minutes he managed more interceptions than both Williams and former Sheffield United centre-back Jagielka.

He was behind the duo in clearances, but 6.5 per 90 is still a very good return and suggests he is more than capable of playing an important role.

Although he won only 50 per cent of his tackles, Funes Mori attempted more while conceding fewer fouls than Williams. He is also taller than both his team-mates, which sees him win a higher percentage of his aerial challenges.

The Toffees measure up very well when defending corners, as explained here, and Burnley’s winner was just the fifth conceded this season, but in the opposition area, Everton could do better as they've scored from just 2.04 per cent of their corners.

Funes Mori’s size would add to their threat without compromising their defensive efforts. 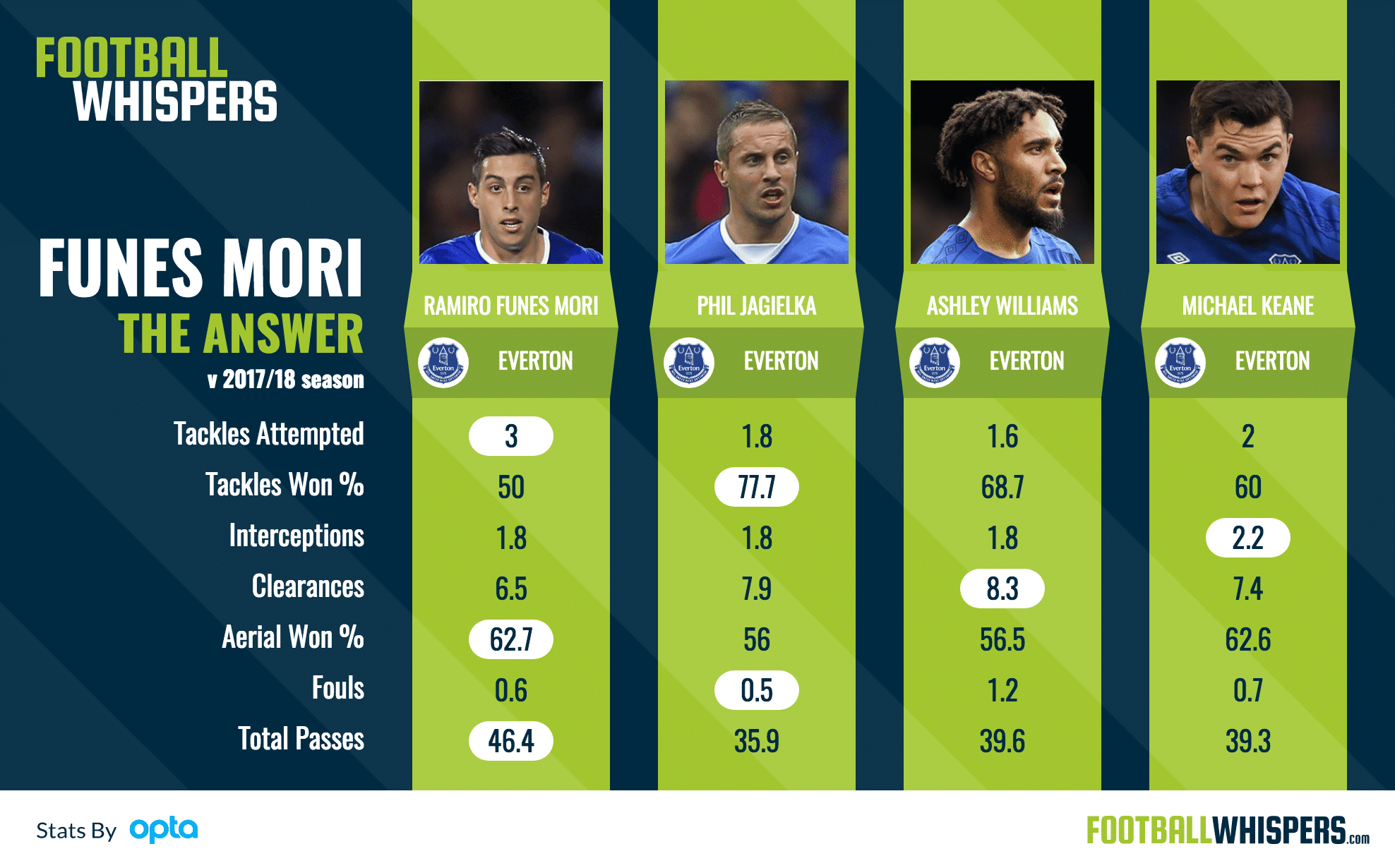 Burnley’s equaliser on Saturday was a simple ball down the channel that was played behind Keane and Williams. Worryingly for Everton, neither could keep up with Ashley Barnes before the forward applied a finish at the near post.

With Allardyce in charge, Everton have become a more defensive team, only two sides in the Premier League attempt fewer shots on goal per game.

Yet, because they sit back, invite teams onto them and give up possession, they also face the second most shots in the league at 14.9 per game.

It would be understandable then to expect all the defenders, including former Manchester United youngster Keane, who arrived in the summer from Burnley, to have seen their defensive statistics improve from last season, but that's not the case.

Jagielka and Williams are making fewer tackles per 90 and the percentage of challenges they win has dropped too.

The number of clearances made by the pair has decreased slightly too, while Keane is below the clearances per 90 posted by Williams and Jagielka last term.

Williams is also committing more fouls, while he and Jagielka are both losing more of their aerial battles. The amount of time they spend on the ball has also dropped by over ten passes per 90 minutes.

Funes Mori – using last season's numbers – would measure up well, even if he just maintained the same level of performance he reached during the 2016/17 campaign. He compares favourably in tackles made and won, the percentage of aerial challenges won and his pass completion accuracy.

No one is claiming the Argentina international is perfect or is a long-term solution to Toffees’ defensive problems, but with Williams and Jagielka 33 and 35 years old respectively, they need a centre-back to play beside Keane and not be a liability.

Funes Mori has shown on many an occasion he has the speed to defend passes in behind and the intelligence to cover runs and step up to cut out the danger when it appears.

And if he’s good enough for Argentina when they take on Neymar and Brazil, he’s the best chance Everton have of shoring up their leaky defence before the end of the season.