A teenage dynamo terrorising the opposition down the flanks at the Camp Nou. It looks as though a strong breeze would knock him down but as soon as the ball is at his feet, it becomes clear he is a special talent.

It feels like a film we’ve all seen before. But this isn’t the Lionel Messi origin story, although it could be. No, this is Ansu Fati’s start to life in Barcelona‘s first-team.

The 2019/20 season has been the perfect storm for the 16-year-old wonderkid. Firstly, Barça were unable to re-sign Neymar. Then injuries meant manager Ernesto Valverde was without Messi, Ousmane Dembélé and Luis Suárez.

The LaLiga champions then made the curious decision to part with Rafinha, a midfielder who had been filling in as a forward due to the injuries.

Pérez was given his first taste of first-team action for the champions against Real Betis, it was only a 12-minute cameo, however. The following weekend saw Fati come off the bench at half-time against Osasuna.

With Barcelona trailing, the 16-year-old nodded home a Pérez cross to equalise. In doing so, he became the club’s youngest goalscorer in the 21st century, claiming a record previously held by Bojan.

There have been many false dawns at the Camp Nou with Giovani Dos Santos also tipped for greatness. However, after a four-year stint with LA Galaxy, the 30-year-old signed for Liga MX club Club América in July. 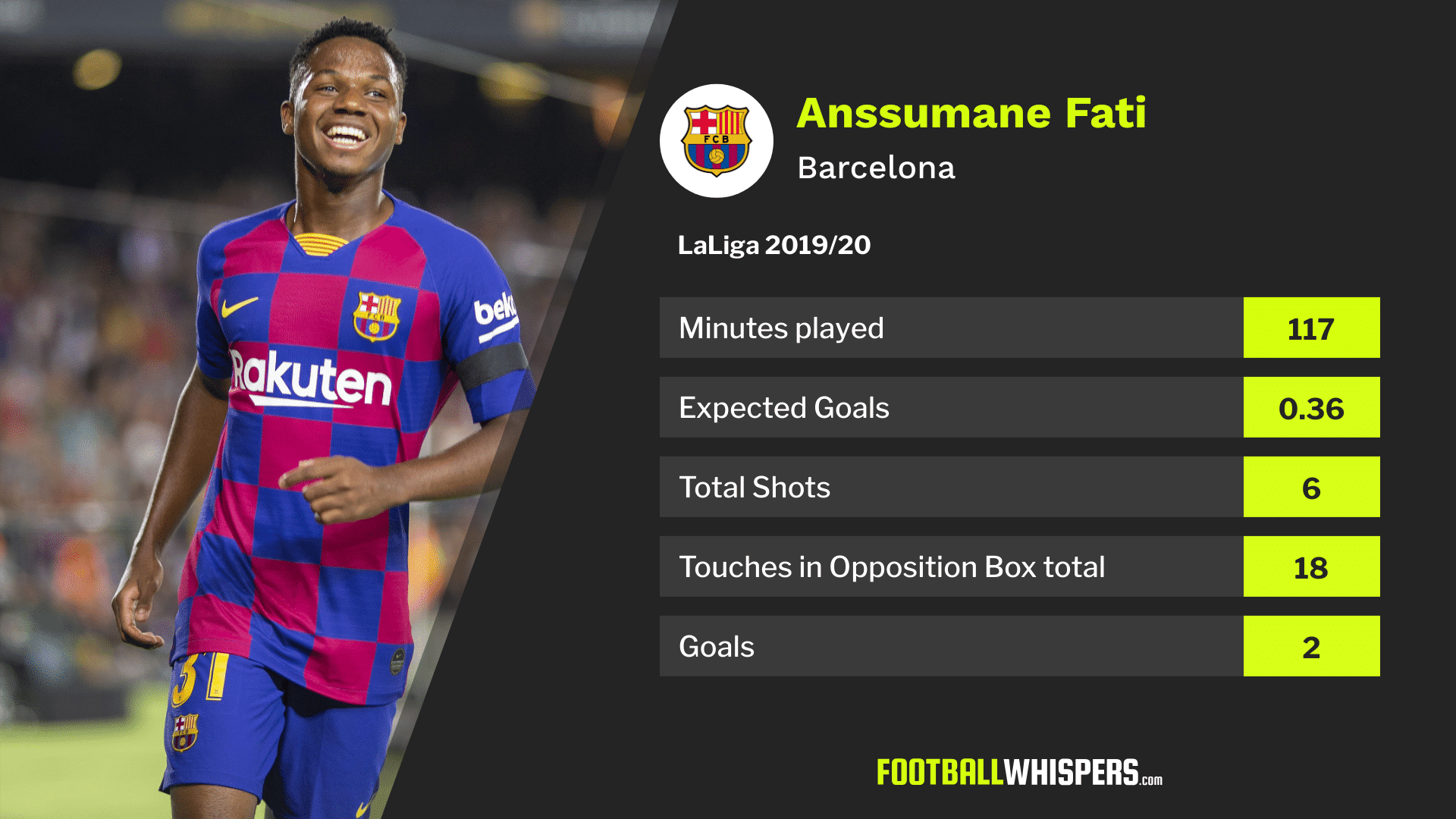 While Messi reigns supreme in Catalonia, the club is on the lookout for a worthy successor. And Fati could be the prince that was promised.

His 45-minute cameo against Osasuna impressed Valverde enough for the Spanish tactician to give the teenager a start against Valencia.

Five minutes later, Fati returned the favour. He danced his way into the penalty area, picked out the Dutch international with a perfect pass and he finished confidently.

Barça have always had high hopes for Fati. Bori, his father, in an interview with RAC 1, revealed Real Madrid offered the best financial package when the youngster was being courted by Spain's elite clubs aged just ten. But it was the champions who made more of an effort with the then Sevilla youngster.

According to Fati senior, then-academy director Albert Puig made a personal visit to the family home to sell them on what Barcelona could offer, not just from a playing perspective but for the entire family.

The club had signed Ansu's older brother Braima a year previously and then added younger sibling Miguel to their ranks. It was a big investment but it appears to now be paying off.

Injuries threatened to derail Fati's progress despite initially impressing alongside Takefusa Kubo in the under-12 side. Kubo, two years Fati's senior and now of Real Madrid, left in search of first-team football.

The 16-year-old started life as a striker but evolved into a wide forward, using his searing pace and quick feet to get the better of isolated full-backs. There's no doubt he could play as a number nine if required but the position he's now deployed in seems to suit align perfectly with his strengths.

Last season, Fati found the net 56 times in 29 games as Barcelona reached the semi-finals of the UEFA Youth League. This season, he's involved himself in three goals in 117 minutes of LaLIga action.

The return of first-team players will see his playing time capped but that isn't necessarily a bad thing. If Barcelona are able to manage him and his talents just as they did with Messi, he could be the man to replace Messi as the team's explosively talented, homegrown forward.