Angel Gomes, one of the jewels in Manchester United's youth academy, has been on the radar of the club's fans for a few years now.

The 18-year-old, who has been at United since he was six, is one of several players – along with gifted Dutchman Tahith Chong and scoring sensation Mason Greenwood – tipped to break into the first team at Old Trafford at some point in the future.

Gomes has been, up until recently anyway, highlighted for his attacking qualities. A diminutive operator at just 5ft 3ins, the teenager's dribbling, passing and quick change of pace have been noted as key attributes.

Indeed, when he shot to prominence in August 2016, it was after he became the youngest United academy player to score a hat-trick, coming off the bench to dismantle Everton in a 5-1 win for the Red Devils' under-18s.

United fans have regularly called for Gomes' integration into the first team. His involvement under Mourinho has amounted to a brief outing against Crystal Palace in May 2017 – in which he became the youngest player since Duncan Edwards to appear for United's first team – and a late cameo in the FA Cup win over Yeovil Town at the start of this year.

And, while he possesses a great deal of promise, it's important to remember that, having just turned 18 in August, his development requires patience.

And he has developed recently, taking up a new role as a deep-lying playmaker in United's underage set-up.

While the senior side suffered misery at the Mestalla against Valencia, losing 2-1 to end any hope of finishing top of their Champions League group, the under-19s won by that same score against Los Che's youngsters in the UEFA Youth League.

There were a few headlines from Nicky Butt's side's win. Shola Shoretire grabbed a few headlines after becoming the youngest ever player to appear in the competition at the age of 14 years and 314 days.

There was also a Youth League debut for 16-year-old Harvey Neville, son of Phil Neville.

But the most intriguing tactical point of the game revolved around Gomes, who partnered Dion McGhee further back in midfield in a 4-2-3-1.

It was not the first time Butt deployed Gomes in a deeper role, having also used him there in the home win over Valencia and both home and away versus Juventus.

Although the starlet has been primarily deployed on the left wing or as part of the three behind the main striker, that Butt is beginning to use him as a string-puller further back suggests the club potentially see him as a long-term successor to Nemanja Matić.

The Serb, despite having only turned 30 in August, has struggled this season, a far cry from the dominant, bestriding midfielder who was pivotal in José Mourinho's Premier League-winning Chelsea side in the 2014/15 season.

Looking at United's alternatives to Matić doesn't inspire much confidence either. Paul Pogba, we're told, is better used higher up the pitch where the Frenchman is freed of defensive responsibilities, while Ander Herrera, committed and tenacious though he may be, is technically limited. Fred can also play there but has yet to fully acclimatise to his new surroundings following his £52million move from Shakhtar Donetsk.

Andreas Pereira and Scott McTominay are both young and potentially first-team regulars of the future but neither has generated as much buzz as Gomes. That United are experimenting with the England Under-19 international's position suggests that they are utilising his skill set in a different way.

And if Mourinho saw footage of United's youngsters in action on Wednesday afternoon, he will have seen that Gomes demonstrated a nous and intelligence on the ball required to operate in front of the defence.

Along with Chong, he was the standout player against Valencia and, although he wore No.10 on the back of his shirt, he played with the vision and precision of a tempo-dictating No.6.

Valencia struggled with Gomes' passing throughout the game. Admittedly, the Spaniards did not help themselves by sitting off the midfielder, allowing him the time and space to look up and pick out one of his more advanced teammates. 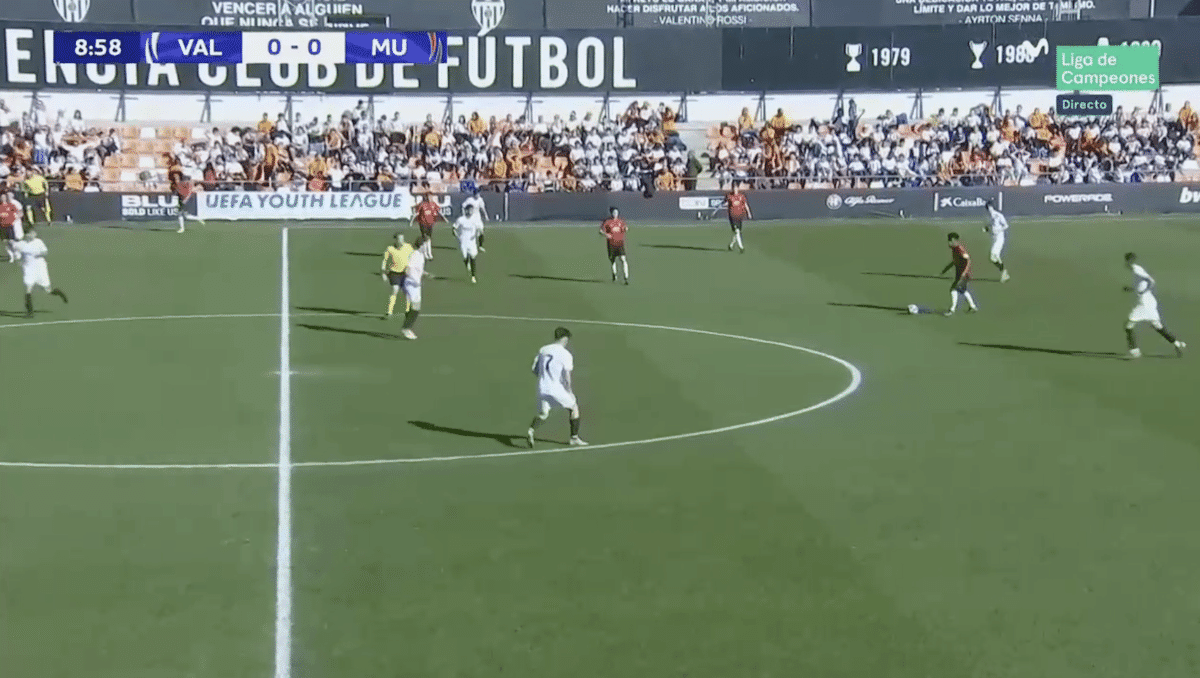 As you can see above, Valencia's players are not pressing Gomes with any sense of structure or enthusiasm; they are essentially inviting the 18-year-old to produce something. 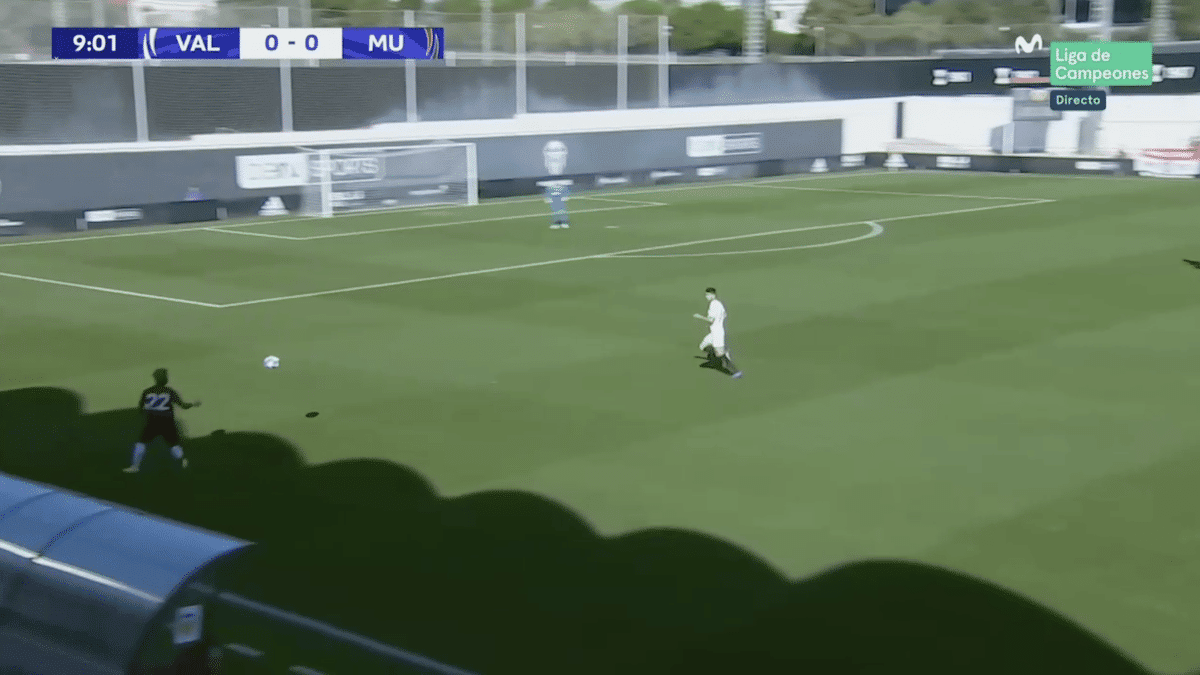 He does. With one arrowed diagonal pass out to the left, Gomes creates a promising one-on-one situation for Belgian winger Largie Ramazani up against the defender.

While that did not result in a goal for United, Valencia did not heed the warning. Having gone a goal up through Jordi Escobar, the hosts again sat off Gomes and allowed him to haul Butt's men back into proceedings. 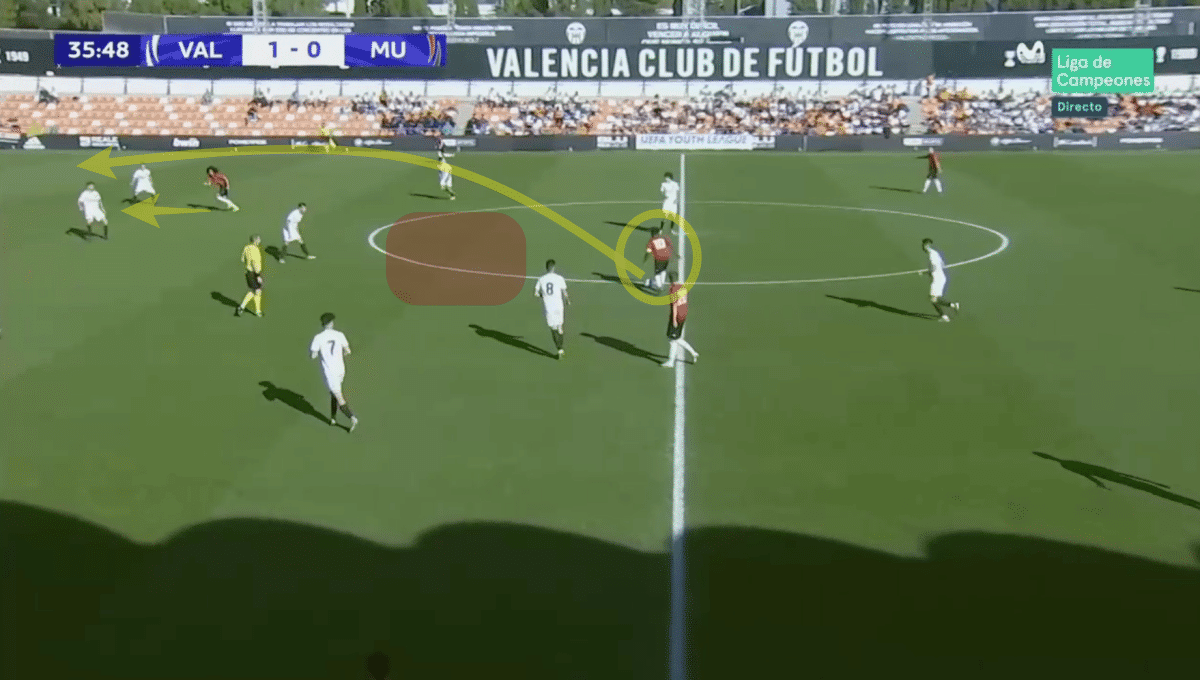 Instead of driving into the space ahead of him, Gomes spots Chong's run between two defenders. 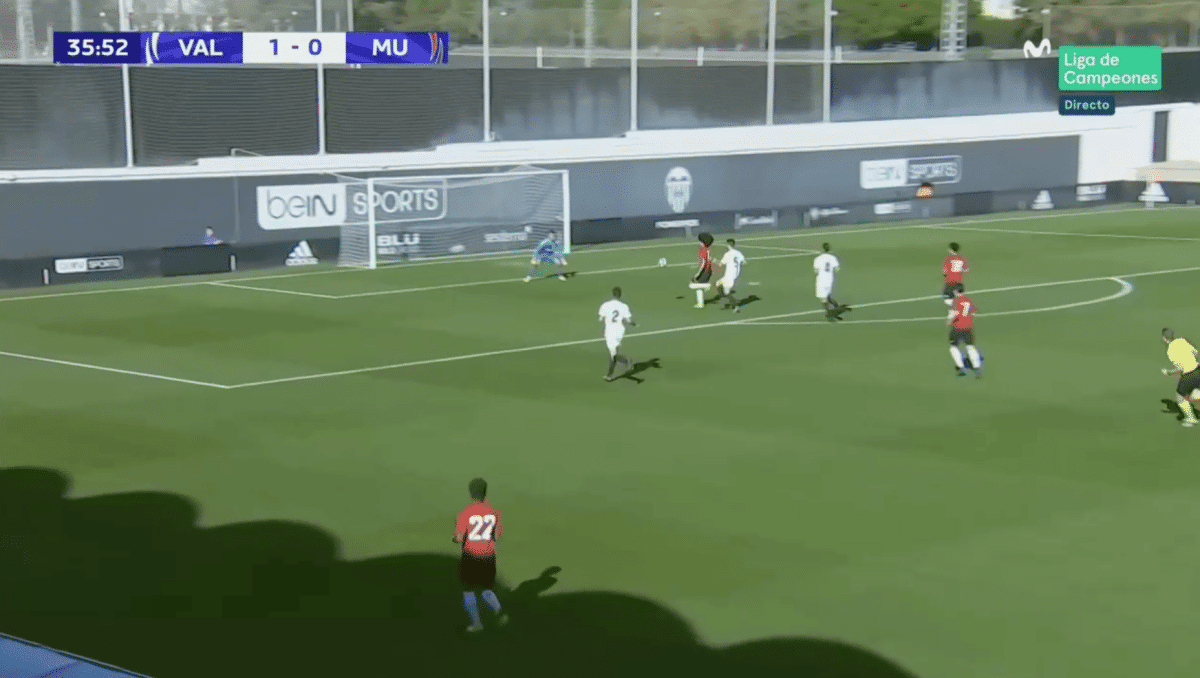 His pass is judged to perfection and, although the Dutchman should have converted, Nishan Burkart swept home after the keeper saved the initial effort.

Gomes is not a luxury craftsman, though. He relishes the grittier elements that naturally come with being a midfielder. Take the Juventus game for example, in which he faced a more aggressive, pressing unit. 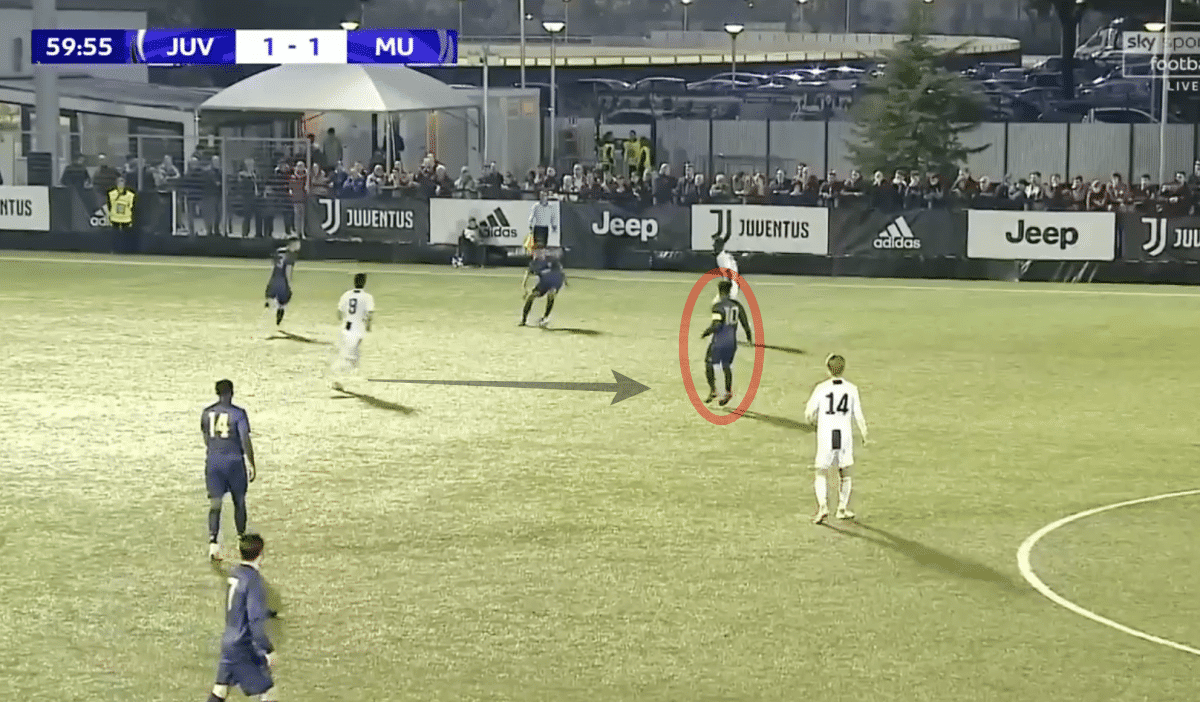 Like the Valencia game, Gomes has found a pocket of space. 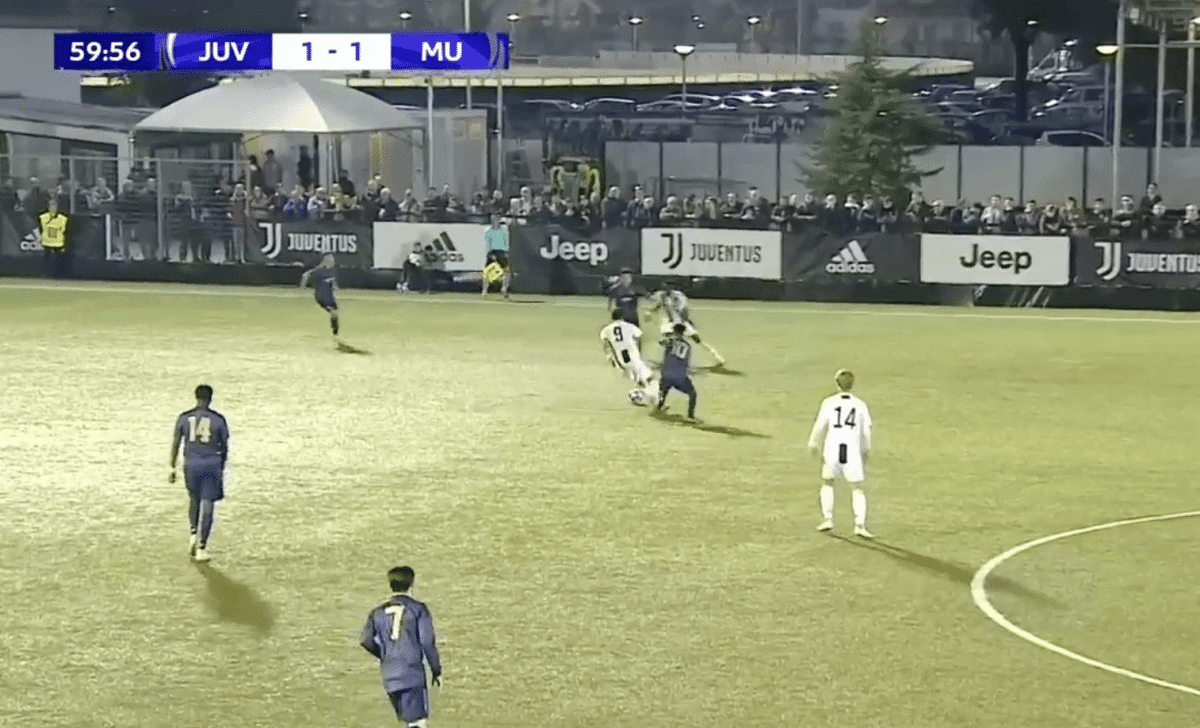 The difference, however, is that Juventus seem much more alert and Mason Greenwood's pass is intercepted by the Italian side's No.9. As you can see above, if the striker successfully turns into the space, United are in trouble. 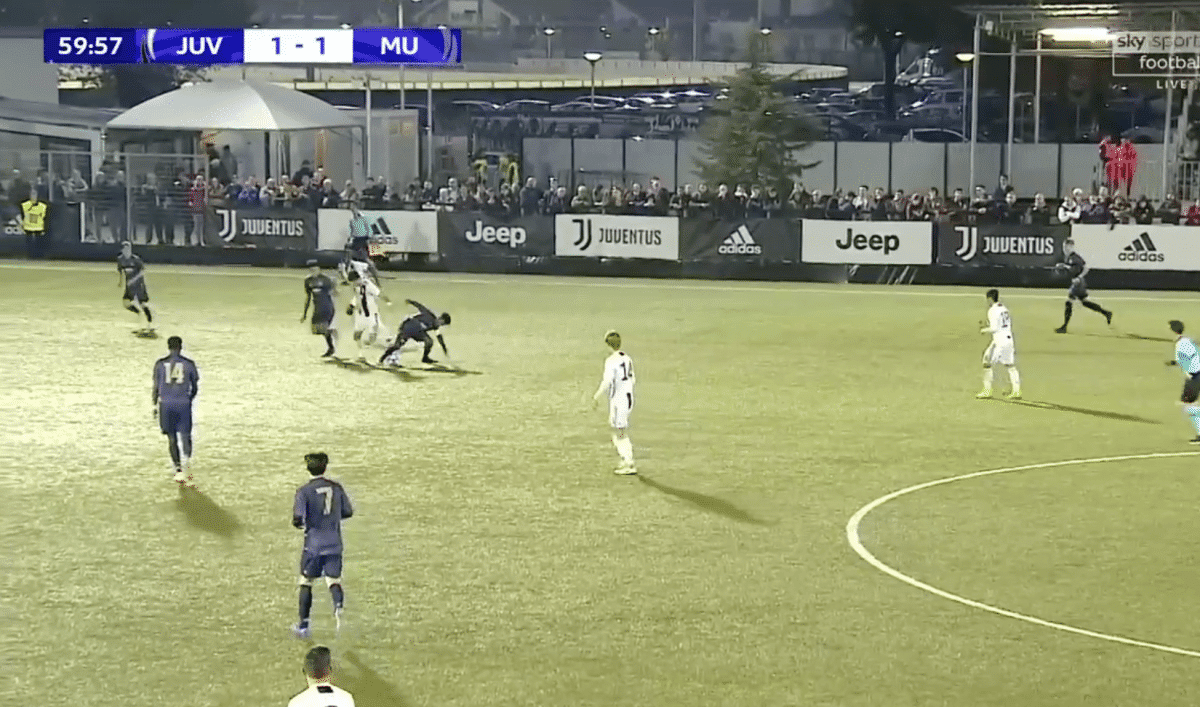 But Gomes' reaction is razor-sharp, decisively getting his foot on the ball and scooping it into his path. 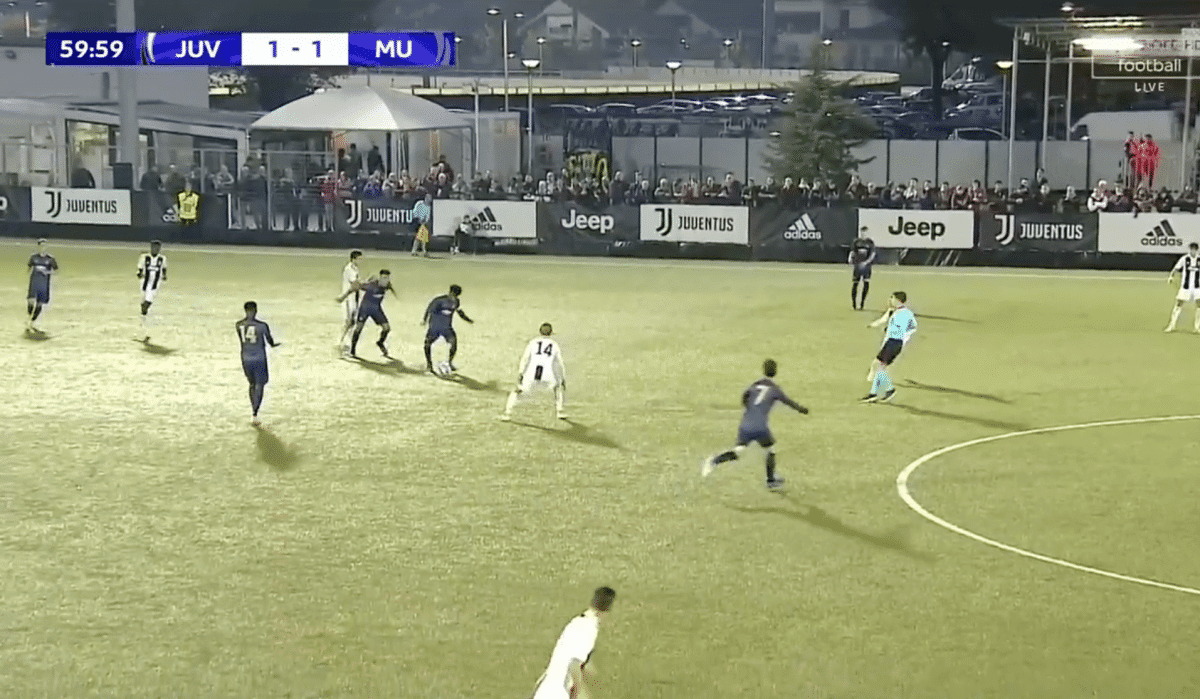 Within a second, he has picked out a runner and turns defence into attack.

Against Valencia, Gomes managed to complete eight out of his nine long balls and 66 of his 69 passes in total. He also made four interceptions and nine recoveries but – tellingly – didn't attempt a single dribble (he usually averages 5.16 per 90), transmitting a sense of calm in the middle of the park.

While these are isolated incidents and small sample sizes, they are telling snapshots of Gomes' ability. Butt is regularly quizzed on the player's prospective path into the first team – as is under-23 boss Ricky Sbragia – but their answers consistently call for patience.

Gomes is an exciting prospect but remains that: a prospect. The best immediate plan for him is to continue to hone his craft in the club's academy. Having topped their Youth League group, the focus is now to help United's youngsters become just the second English side after Chelsea to clinch the competition.

If that happens, doors will open. For now, though, United fans can only hope Mourinho continues to track his progress closely and hands him another run-out soon (the visit of Reading in the FA Cup third round sounds promising).

Should he continue to perform with the same creativity and bite in midfield, Mourinho may have the long-term solution to one of his most pressing issues.