For a time it appeared as though Liverpool's search for a left-back would be never-ending. The links varied between tentative and serious but with the amount of full-backs linked with a move to Anfield this summer you could a decent, albeit one-footed, José Mourinho team – ultra defensive  with a flat-back 10.

However, reports in the Guardian claim the Reds are closing in on the signing of Hull City left-back Andrew Robertson with Alberto Moreno expected to leave the club.

It was believed that the Scottish full-back was heading to Burnley, with Sean Dyche's men heavily linked with the 23-year-old over recent weeks. But their focus suddenly shifted and Leeds United's Charlie Taylor is now close to calling Turf Moor home from next season, as reported by the Daily Mail.

The news that the club may be back in for the £10million rated Scottish International comes less than a month after he told the Hull Daily Mail that he wouldn't rush into making a decision on his future.

“That’s not something I’m going to worry about until well into the summer,” he said.

“The only thing I can really say is that all the players face uncertainty. There will be people moving on but, for now, I’m just focusing on this game [vs England] in front of us. I do that because it’s so massive for the country.

“All I can do is play as well as I can on the day, and I’ll worry about my future after that. I’ll sit down after this game with the people I need to talk to, and decide if it’s right for me to stay at Hull, or if I should look to move on.”

With Burnley abruptly ending their interest in the former Dundee United man and one of Liverpool's most reliable journalists mentioning his name, it appears his mind may well be made up.

He's by no means the first-choice Liverpool transfer target but after a series of setbacks in the market it appears as though Jürgen Klopp and the recruitment team have settled on a reliable left-back as opposed to a fashionable one.

It's through no fault of his own. The Merseyside based club have been linked with the likes of Theo Hernández, Benjamin Mendy and the exciting yet raw Ryan Sessegnon. Compared to that trio Robertson is a step-down and could be viewed as underwhelming. He's a safe option.

But since when has safe been a bad thing. Every team need a Mr Consistent, and ask a Liverpool fan who their favourite right-back is since the inception of the Premier League and the majority will say one name. Steve Finnan – a real steady Eddie.

Patrik Berger on Mohamed Salah, The Summer… by FootballWhispers

Robertson has been at Hull for three years and was due to be out of contract this summer. Hull, however, activated a one-year extension to ensure they’ll receive a fee if he leaves.

The mooted fee for his services is reportedly £8million, with Liverpool needing to break the bank to land top targets Naby Keïta and Virgil van Dijk, being frugal in other areas shouldn't be frowned upon.

Why Robertson is a target for Liverpool

The obvious answer here would be because the Reds are running out of left-backs to target. But on a serious note, there will be a certain profile for the left-back that the club want to bring in.

The majority of linked targets are all nippy for starters. Robertson is no slouch.

They're all comfortable on the ball and, despite having the ability to go on the outside and attack the byline, they aren't averse to drifting into central areas to have an impact on the play there.

On the surface, at least, Robertson appears to tick those boxes.

One criticism levelled his way is that he's somewhat of a crossing fiend. But, as the graphic below details, Milner averages more crosses per 90 minutes than Robertson.

He doesn't just whip the ball into the area and waste possession, he is, or at least tries to be, careful with his distribution of the ball.

Which, of course, is a positive for the Reds. They commit bodies forward and if there's a turnover in possession then there's a chance of a counter – as fans are well aware, the team aren't the best when it comes to dealing with those. 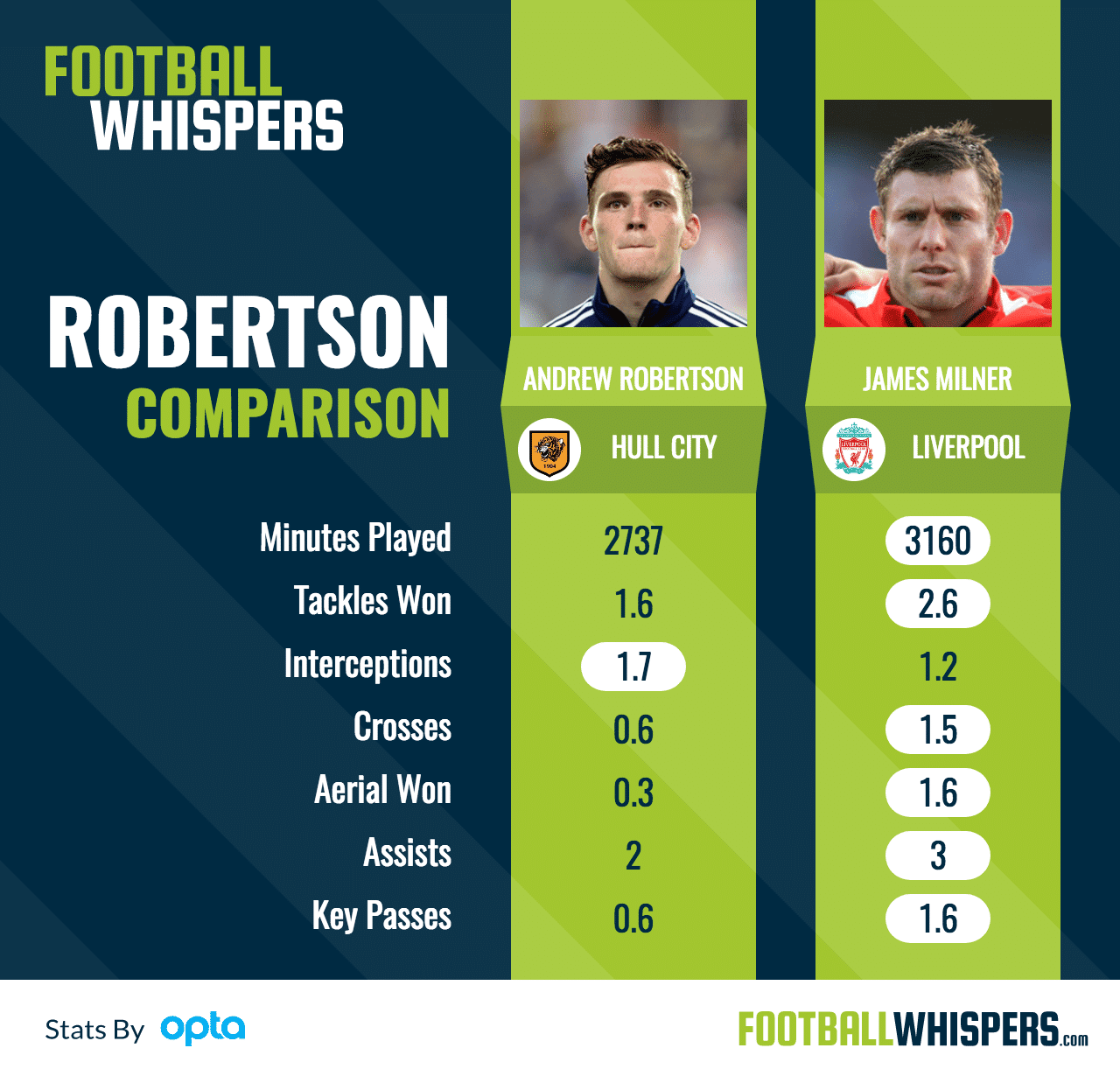 It's hard to fairly judge Robertson against current incumbent James Milner. The latter was part of a team gunning for a place in the top four, one that played some of the best football in the whole of Europe pre-2017.

The former was part of a team that spent the majority of the campaign fighting relegation. The Tigers had a mini revival under Marco Silva but it was somewhat of a false dawn and they were eventually relegated.

Stats don't paint a fair picture in that sense.

It's when you breakdown the Scotsman's performances throughout his debut campaign in the top flight you see why those at Anfield are seemingly interested.

He played as part of a 3-5-2 system, of sorts, under his Portuguese manager at the KCOM Stadium. He was tasked with being the width on the left flank in a wing-back role. Although Liverpool played a 4-3-3 on paper when in possession it was more of a 3-4-3 with the full-backs pushing further upfield and the wide forwards coming centrally.

Not all players can handle playing the role of left-back, wing-back, midfield and winger but Robertson acclimatised well to the role.

Liverpool tasked their front three especially Sadio Mané and Roberto Firmino, with creating space with intelligent runs off of the ball. They had a lot of joy out of it as a team.

Any incoming player will have to be comfortable reading the patterns of movement from the attacking players and be comfortable exploiting the space; it almost has to be natural. Robertson showcased that ability a few times for Hull last term. 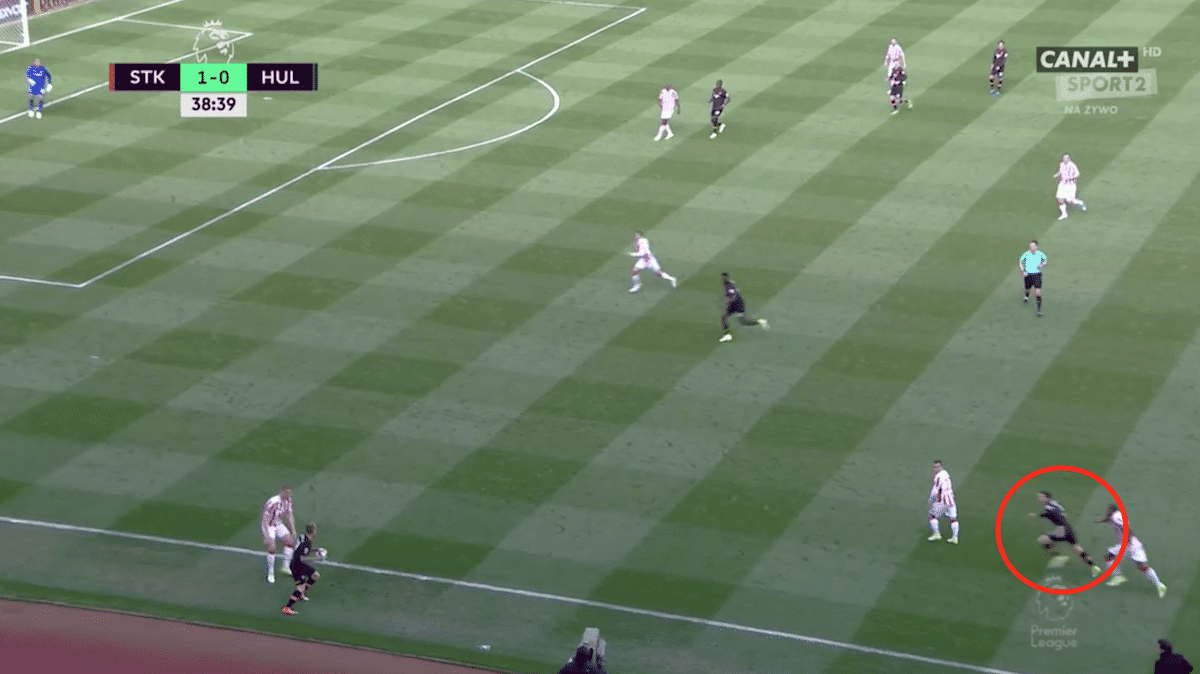 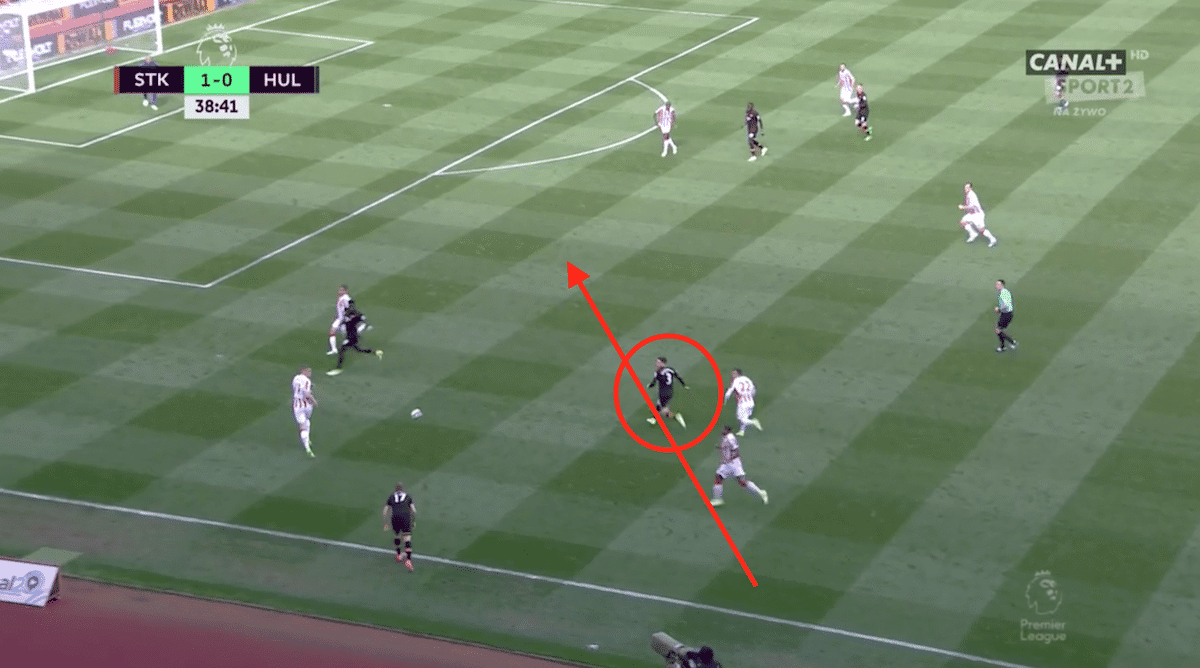 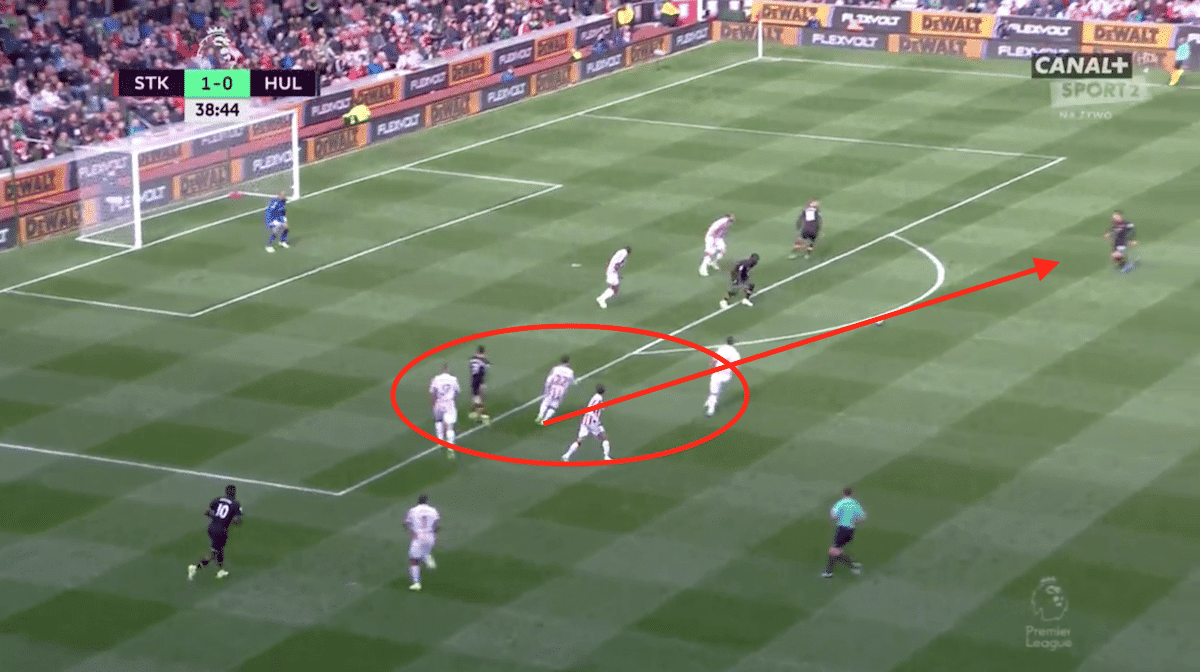 In the sequence above, taken from Hull's match against Stoke, you get to see Robertson's spatial awareness. The ball is out for a throw in and he could just come short for the ball.

However, circled in red, you see him acknowledge that Alfred N'Diaye has made a run down the line and opened up a lot of space centrally. Robertson changes his run and darts into the space.

In the final picture you see four of Mark Hughes' men in close proximity to the Scotland international as he plays a pass to the free man, Lazar Markovic, who, coincidentally, is only afforded such space because so many of the Stoke players have been attracted to Robertson because of his run. 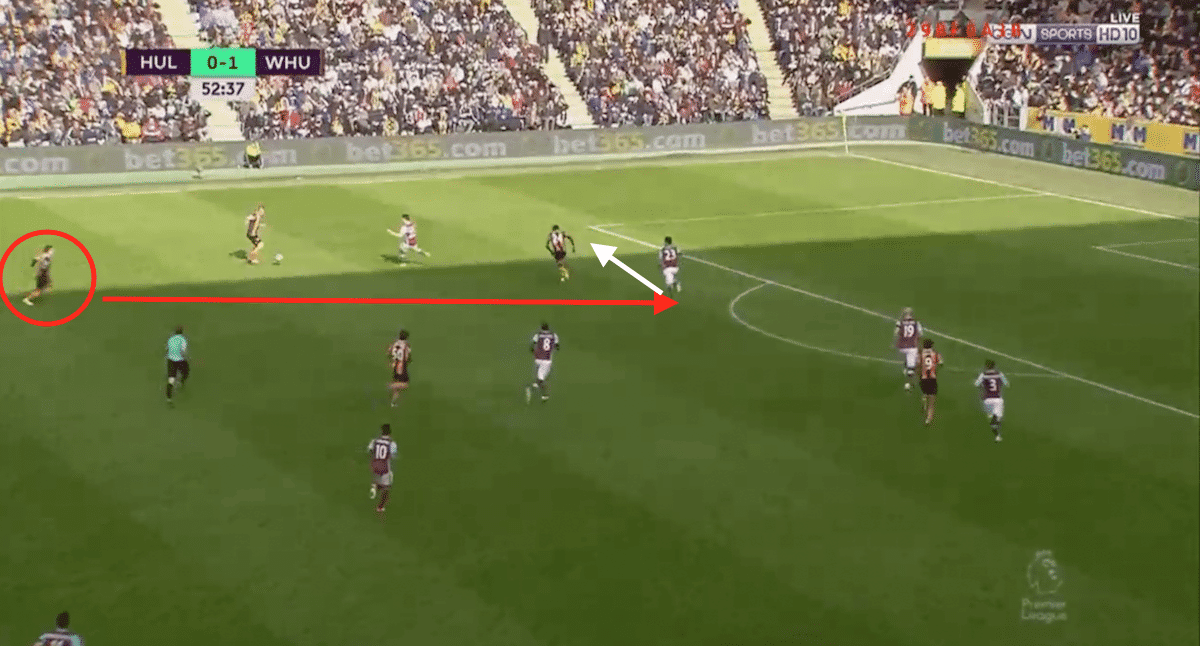 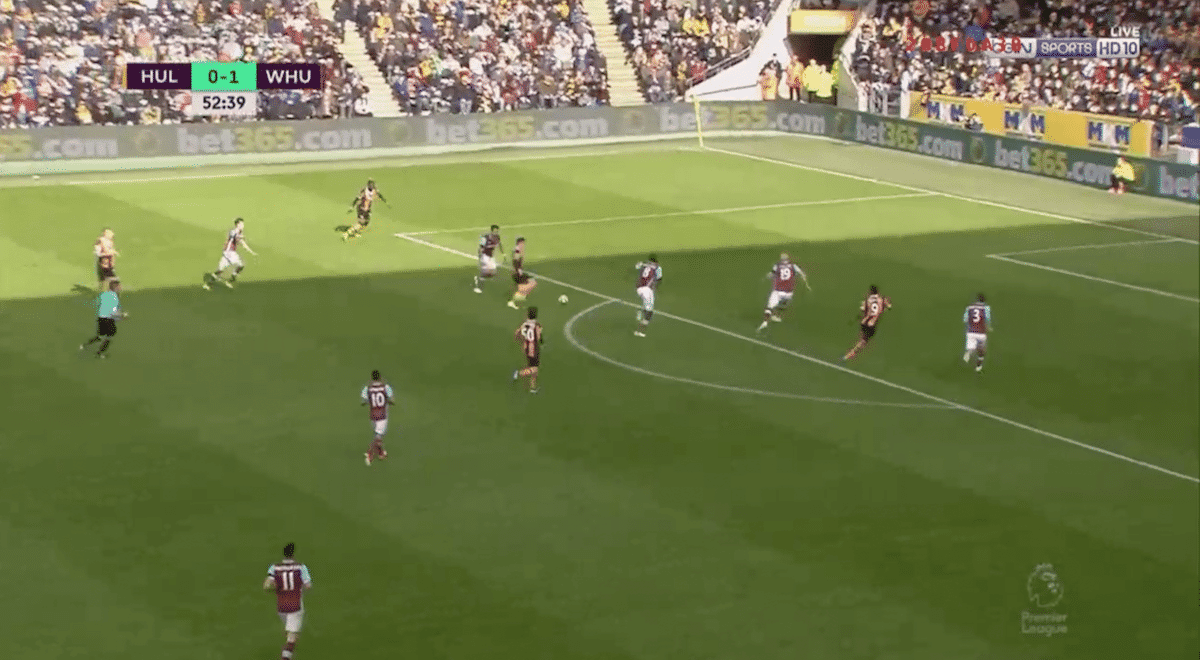 This time it's against West Ham United and it results in Robertson finding the back of the net. He arrives late from a deep area and makes the most of the space created in a central area. He then dances his way past a number of players before firing home from inside the penalty area.

A tactic Liverpool deployed last season at times was to have the left centre-midfielder take up a wide position which enabled Milner to drift infield onto his stronger foot. If they used a similar tactic next season with Robertson then they could have a lot of joy thanks to his direct, aggressive style.

He's might not be the left-back Liverpool fans hoped for with Champions League football on the horizon but there's logic to a move. The alternative might have been another season of an unrivalled James Milner playing there.