Liverpool need to add depth to their squad in key areas this summer. One such position the European champions will look to address is left-back. While Andrew Robertson is the undisputed starter, beyond him the options are limited.

Alberto Moreno‘s release means the replacement for the industrious Scot is James Milner. If natural width is required then Jürgen Klopp would have to look to academy player Adam Lewis.

The Liverpool boss isn't against giving youth an opportunity, but the step up for Lewis, who has no first-team experience, to play one of the most important roles in the team would be too great as things stand.

So the Reds need to sign someone to give Robertson a break. The Scotland captain played 47 times last season in all competitions. Liverpool were lucky he didn't pick up any injuries but burnout should be a genuine fear. Klopp was able to rest Trent Alexander-Arnold on occasion. Robertson wasn't afforded such a luxury.

As an integral part of the first-team, his playing time will have to be managed.

Ideally, Liverpool would want a youngster – one who can be crafted into exactly what Klopp wants – with experience of playing first-team football. A player with the hunger to improve and potentially rival Robertson for a start down the line.

With this in mind, we've delved into the Football Whispers lab to find players who might fit the bill. After looking at Robertson's numbers over the past two seasons, the requirements, on a per 90 minute basis, are as follows:

We take a look three of the hottest players in Europa and why the Dutch are contenders for #Euro2020 ?https://t.co/aDh5DpjRrp

That isn't to say Wolves man won't be a target for the Reds, just that the 700 minutes he's played in the English top flight make it difficult to really judge his data.

Let's get to our trio… 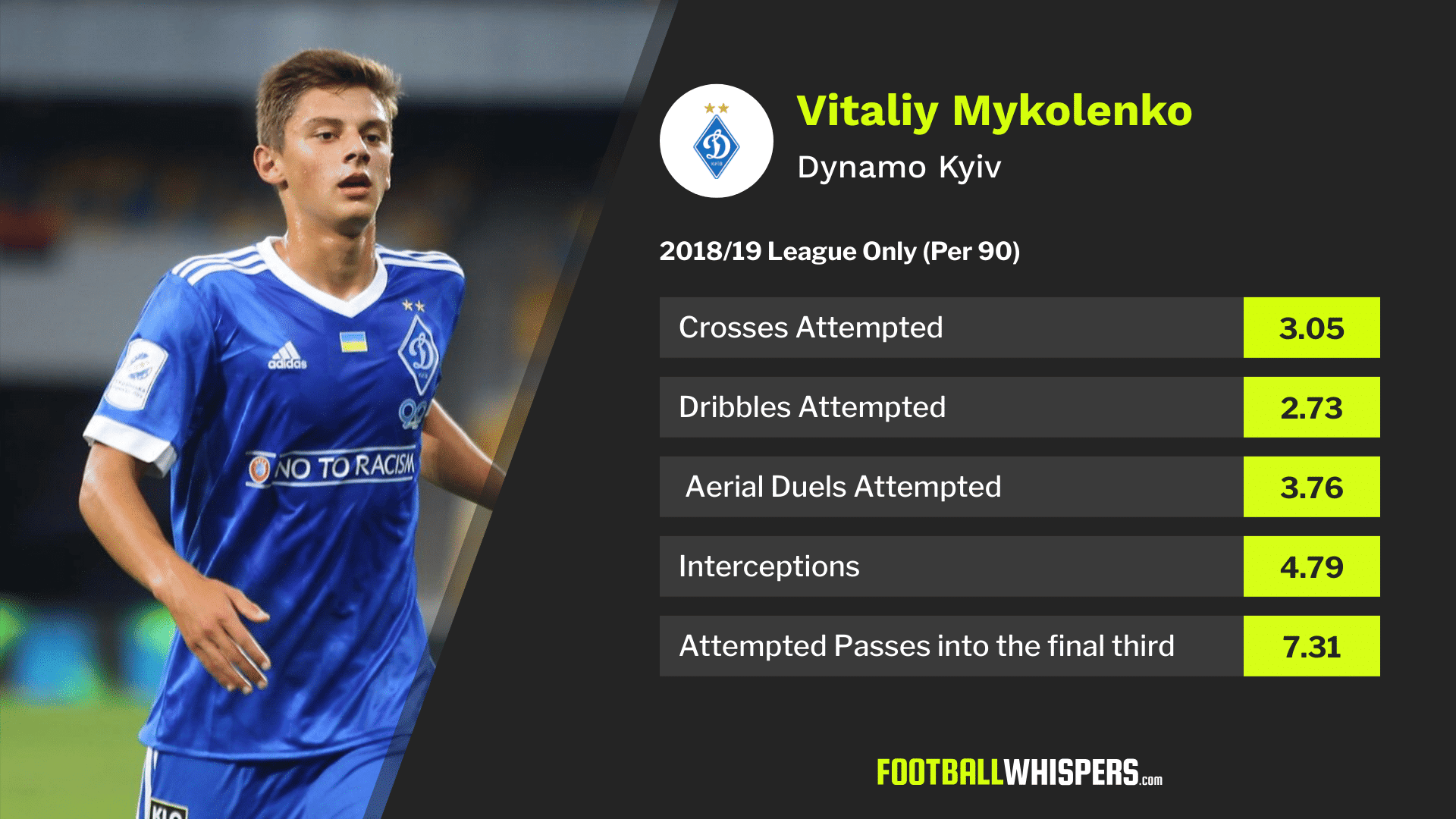 There's a bit of Ben Chilwell to Mykolenko. Both appear taller than the average full-back yet neither surpasses the 5ft 10ins mark. However, it does give the Ukraine international the freedom to almost act as a third centre-back at times, a handy player to have in your back four.

The 20-year-old has had a meteoric rise over the past year. He only made his debut for Dynamic Kyiv during the 2017/18 season but the 2018/19 campaign saw him appear in over 30 matches in all competitions and break into the national set-up.

His dribbling needs improvement – at times it looks like he's never in control of the ball – but this aids him on occasion as it tempts opponents into making challenges and creates space for the Kyiv No.16 and teammates to attack.

His crossing profile is slightly different from Robertson's. Whereas the Scot puts balls in, more often than not, from the area ten-yards prior to the penalty box, Mykolenko likes to drive deeper into the opponents half before intelligently pulling his cross back.

However, Mykolenko does have it in him to play the type of crosses Robertson has built his reputation on. And it's the sort of cross you can develop with time on the training pitch. 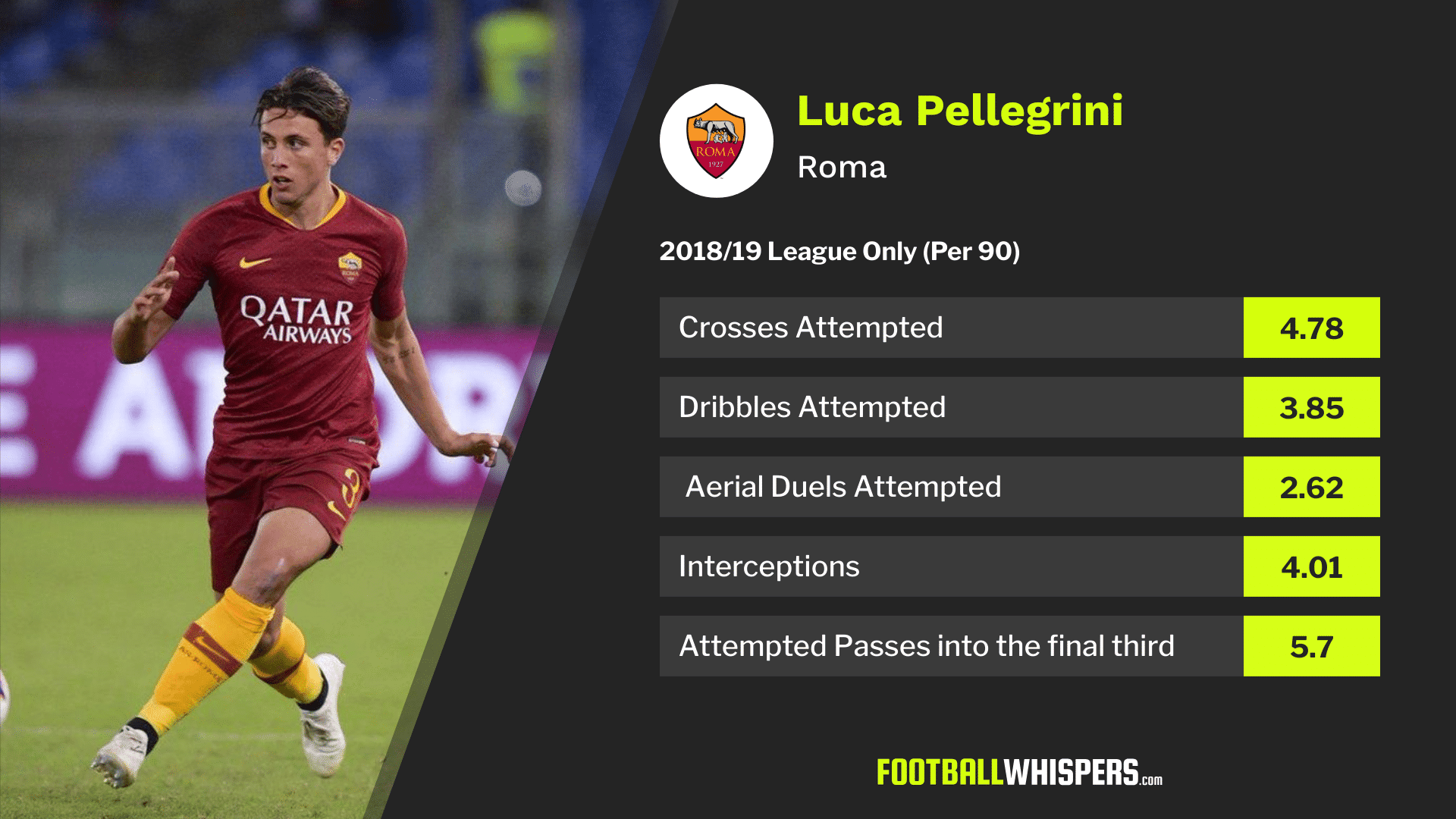 Liverpool have had a lot of joy when buying from Roma over recent seasons. However, the last Italian to make the switch from Rome to Merseyside didn't work out that well. Alberto Aquilani never really got going for the Reds but Pellegrini could well right that wrong.

The 20-year-old has been linked in the past so it appears he is on Michael Edwards' radar. He spent the latter half of last season on loan with Cagliari, a team who finished just three points above the drop in Serie A. So by no means a free-flowing, dominant side.

Yet Pellegrini still managed to post impressive numbers. He's a confident dribbler, even deployed as a left winger at times as well as a midfielder at youth level, and his crossing profile is a lot more similar to Robertson's.

The Roma man likes to get the ball in early when the opposition haven't yet set themselves and there's space in behind the defence. His crossing can be erratic but they are consistently dangerous. 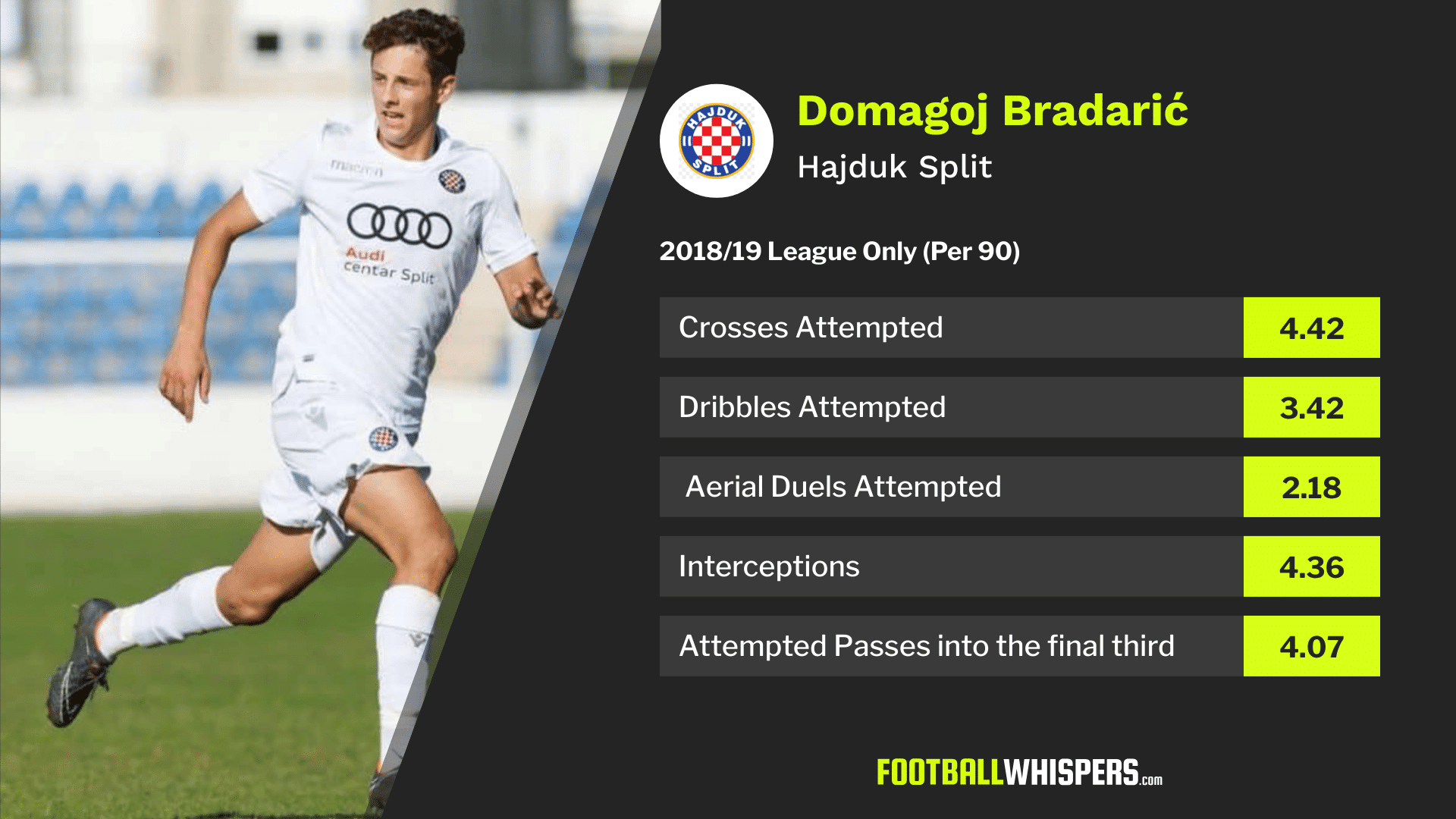 The 19-year-old made his debut for Hadjuk Split during the 2018/19 season and went on to make 15 appearances in all competitions. Bradarić has a host of clubs interested in him according to reports, with Lille, Nice and Ajax all believed to be keen on acquiring his services.

Despite his tender years, he's composed on the ball. Not only does he read the game well, as highlighted by his 4.36 interceptions per 90, but he's also intelligent with his positioning. The youngster is often able to play first-time balls into the area due to how he sets himself before he receives a pass.

When Bradarić is involved, the game just seems to move quicker. He's the sort of full-back a side need when you're coming up against low defensive blocks on a regular basis.

Bradarić is also a competent finisher who isn't shy about drifting infield. It's something Alexander-Arnold does on the opposite flank and Robertson does on occasion on the left. It's an invaluable trait to have for a side like Liverpool.