On the face of it, there is not a great deal that Chelsea need to improve on in the summer transfer market. A comfortable 3-0 triumph over Middlesbrough on Monday night moved Antonio Conte’s men to within three points of the Premier League title, with Friday’s trip to The Hawthorns representing a chance for the Blues to get their hands on the trophy before second-placed Tottenham Hotspur next take to the field on Sunday afternoon.

Despite his team’s domestic dominance – Chelsea could also add an eighth FA Cup to their honours list with victory over Arsenal in this month’s final – Conte will certainly have work to do in the window as he prepares his players to fight on four fronts next term. For all his success as Juventus manager, the Italian struggled to translate the Bianconeri’s Serie A success to continental competition, so it will be a test for the 47-year-old to challenge in both Europe and at home in 2017/18.

Greater squad depth will certainly be required given the increase in matches, while Conte may also have earmarked potential improvements to his starting XI, which has remained relatively settled for much of his debut season in English football.

Chelsea have received justifiable criticism for their youth policy in recent years, with the west London club accused of stockpiling young players with no intention of ever using them in the first team. Such prospects are routinely loaned out, often for multiple campaigns, and only a handful are ever given any sort of opportunity to impress the current head coach. There are benefits to such an approach, though, and some of those may be felt next term: the likes of Kenedy, Jeremie Boga, Baba Rahman, Bertrand Traoré and Tammy Abraham may soon be considered ready to hook up with the first-team squad after spells elsewhere.

Andreas Christensen is another player who could come into the fold after a two-year loan at Borussia Mönchengladbach. Club captain John Terry has already announced his intention to depart Stamford Bridge at the end of June, of course, which frees up at least one spot in Chelsea’s pool of defenders. It remains unclear, moreover, how much Conte trusts David Luiz and Gary Cahill to replicate their excellent performances this season in 2017/18. 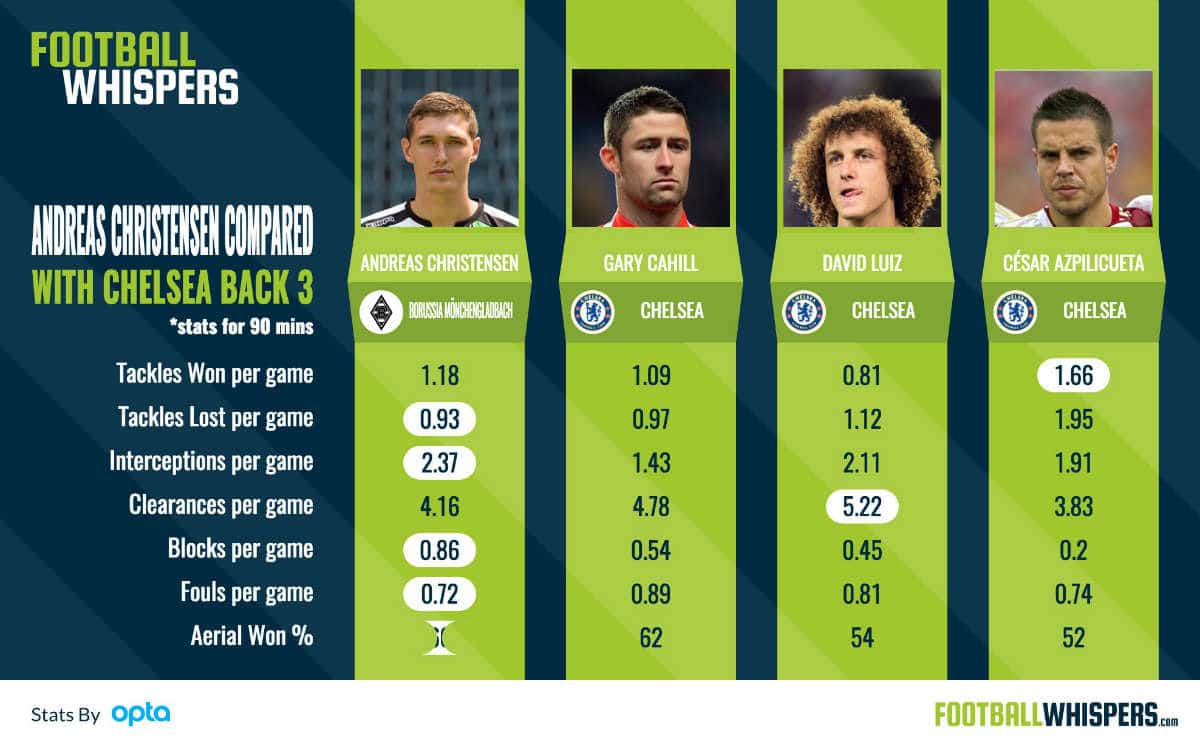 READ MORE: WHY ANDREAS CHRISTENSEN COULD SAVE CHELSEA MILLIONS

Kurt Zouma and Nathan Aké are other young defenders who will be hoping for an opportunity from August onwards, but Christensen should not be forgotten despite the fact that his experience of the Premier League amounts to a paltry 12 minutes in a 3-1 defeat of Sunderland in April 2015.

The Denmark international is a talented and thoroughly modern centre-back. Much like the departing Terry, he is comfortable in possession – so much so that he has at times been deployed in midfield – and can pass the ball well with both feet, while he is a fine reader of the game who is rarely caught out of position.

Christensen, who is still only 21-years-old, is also agile and mobile, qualities which should help him to thrive in the all-action Premier League. The Brøndby youth product may stand at 6ft 2in but he is not the most physical of centre-backs, although that would not necessarily be an issue if he proved able to outsmart – rather than outmuscle – his direct opponents. His Bundesliga career did not get off to the best of starts, but most of the evidence from the last couple of years suggests that Christensen would indeed be able to do exactly that.

“That Chelsea want Andreas, who has made a great development step with us, to go back is logical,” Gladbach sporting director Max Eberl told RP Online in an interview last month. “But do we know what their plans are in the end?

“If there is a possibility, we have a foot in the door, not only at Chelsea, but also with Andreas. I say it this way: The fight is not yet hopeless. Already, we can create a situation where we can get back on track.”

Christensen himself threw the ball into his parent club’s court earlier this season, telling the Rheinischen Post: “I do not know yet whether my future lies at Chelsea or Borussia Mönchengladbach… maybe the decision is not mine to make. Perhaps I do not even have a choice. There is nothing I can do if Chelsea want me to return.

“But if I get to make the decision myself, I will take my time and take everything into consideration. It is not an easy decision. I like both clubs and do not want to compare them.”

After two highly successful seasons in Germany, Christensen is ready to take the next step in his career. As Conte’s Chelsea seek to add more silverware to their trophy cabinet next season, the Dane could become an integral part of the Blues’ squad for the first time since his arrival in west London in 2012.