Without a win in their first seven Premier League games and having shipped eight against Andrea Cistana.

According to Tuttomercatoweb, the Hornets were one of two clubs to send representatives to Stadio Rigamonti on Tuesday night to watch the 22-year-old in action against Juventus.

LaLiga outfit Villarreal were the other side in attendance as the Bianconeri came from behind to record a hard-fought 2-1 win over the Serie A new-boys.

Those watching would have got a good feel for what Cistana is like defensively. Maurizio Sarri's side laid siege on the hosts' goal and dominated the ball, completing 622 passes – 154 of which were in Brescia's third – to 230.

As detailed earlier this week, the defence is an area of Watford's squad which has been overlooked in recent seasons. While the signing of Craig Dawson from West Bromwich Albion was meant to change that, it's been an unmitigated disaster so far. 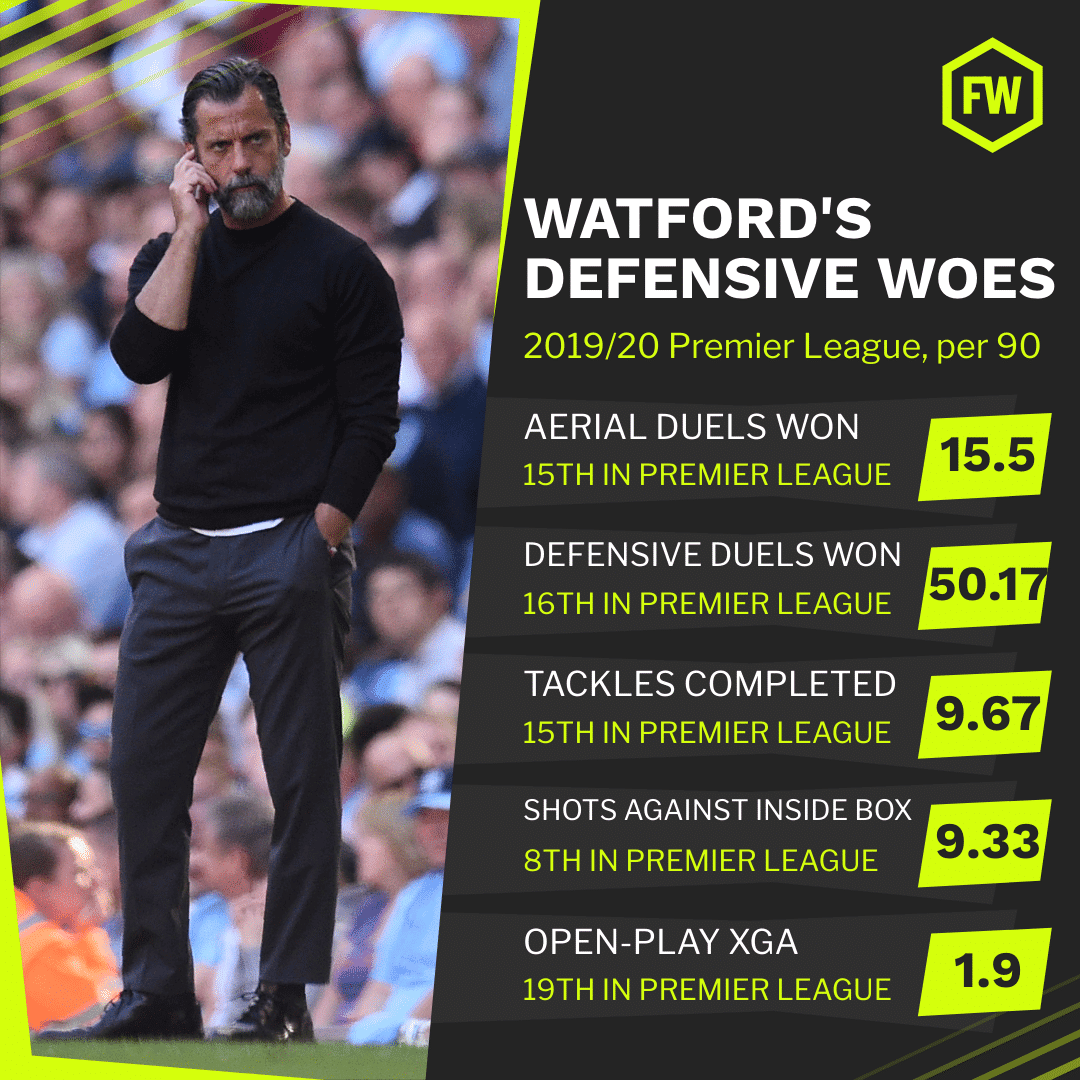 On the whole, Watford prefer not to do business during the January transfer window. But they have shown in the past they are prepared to contradict that belief if their situation necessitates it.

“Usually we use the January transfer window to correct what is wrong or if there has been issues like injury,” technical director Filippo Giraldi explained in January 2018.

That month the Hornets dipped into the market to sign Gerard Deulofeu on loan from M'baye Niang who steered Watford through the choppy waters of Walter Mazzarri's reign.

If Quique Sánchez Flores has been unable to instil the defensive rigidity which characterised his first spell at Vicarage Road before the transfer market re-opens, signing a central defender will surely be the club's top priority in January if they are to extend their top-flight stay into a sixth season.

Whether or not Cistana is the man to plug a leaky defence is another matter altogether. The 22-year-old is in his fourth season of senior football and first in the top flight having won promotion with Brescia last season. Prior to that, he spent time on loan in Serie D with Ciliverghe Mazzano and Serie C with Prato.

Taking a look at his defensive statistics for the current campaign, in which Cistana has played every available minute for Le Rondinelle (The Little Swallows), nothing leaps off the page. 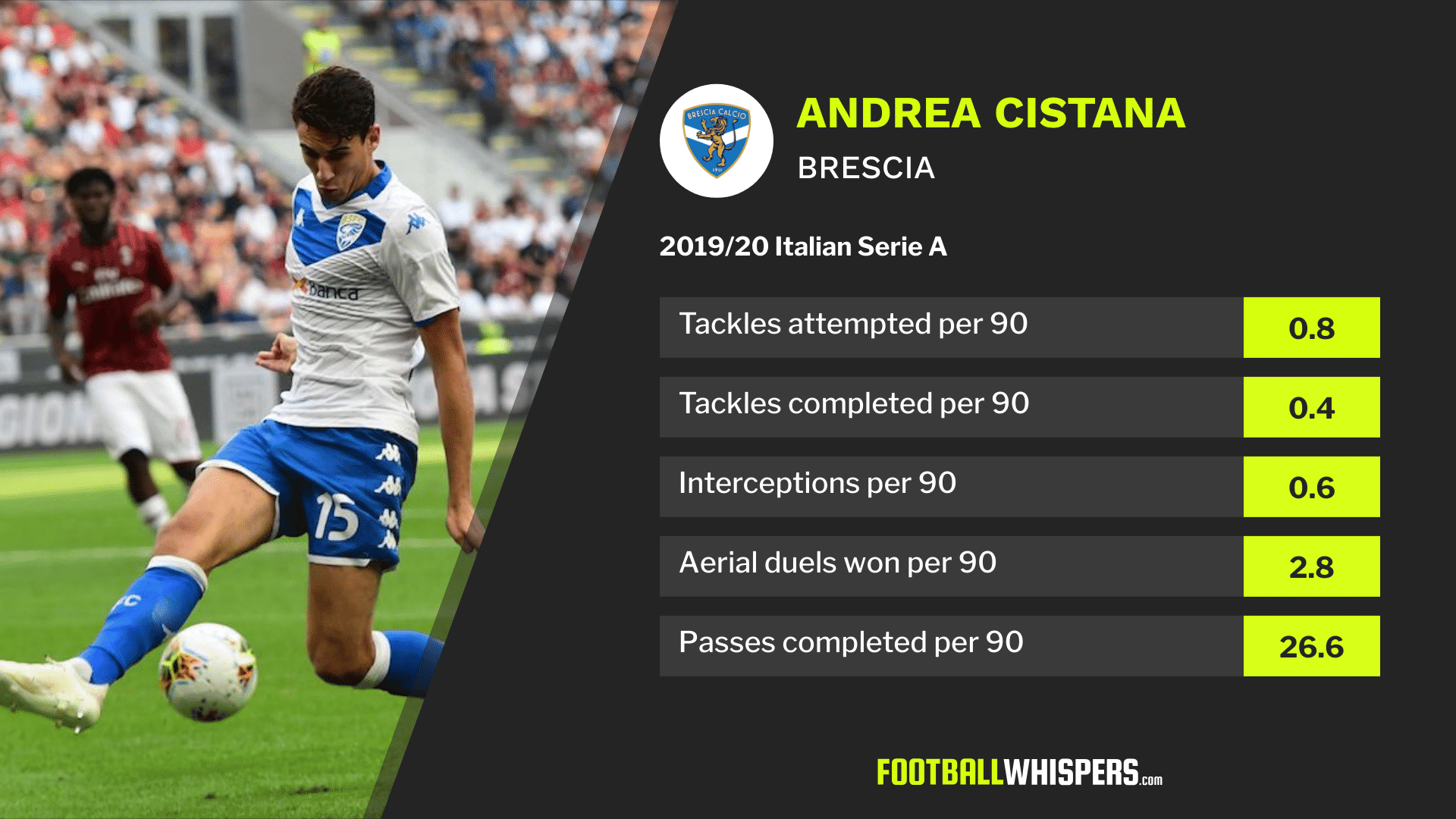 Even amongst his defensive peers at Brescia, Cistana has won the fewest defensive duels per 90 with four, the second-fewest tackles (0.2) and second-fewest interceptions (0.60).

But it's little wonder when you consider Brescia have conceded the second-most shots from inside the box per 90 with 11.2 while their xGA total for the season is 8.04, the second-worst in Serie A ahead only of SPAL after five matches.

Unsurprisingly, then, Cistana's defensive metrics present an altogether rosier picture for Brescia's 2018/19 Serie B title-winning season. For a start, he won 3.85 defensive duels per 90 and was successful in 2.2 aerial duels.

On top of that, Cistana posted an impressive 4.95 interceptions which speak for his impressive reading of the game. Strong and tenacious in the tackle, the 22-year-old has an unnerving ability to stick a leg in where required and stab the ball the safety.

In fact, he is far better at reading the game and cutting possession out than reacting to a situation and making a tackle. Cistana attempted just 0.62 per 90 en-route to promotion, succeeding with only 0.17, a staggeringly low average.

However, that is in keeping with the two players he partnered at centre-half most frequently last term. Veteran Daniele Gastaldello attempted just 0.53 per 90, succeeding with 0.27, while Empoli loanee Simone Romagnoli averaged just 0.32, winning just 0.05 per 90.

Clearly, then, it is not the team's modus operandi to engage and attempt to win tackles and in that sense, Cistana is perfect for the system. He reads the game well and is quick, aggressive and positive in trying to get between his man and the ball.

Unafraid of stepping out to play when in possession, he also possesses a good range of passing and attempts more passes (33.6) and dribbles (0.2) per 90 than any of Brescia's other centre-halves.

However, at just 22 and with fewer than 50 professional starts to his name he is a project and not the finished product. One for the future? Most certainly. But Watford need to plug the leaks before they sink into the Championship.