Another transfer window, another striker. West Ham are constantly in the market for centre forwards but they rarely seem to find a player to lead their line reliably and on a regular basis.

Andy Carroll has been at the club since 2012 but is yet to break the 30 game mark in a season thanks to a string of injury problems.

The last player to reach double figures for league goals for the Hammers was Diafra Sakho in 2015. But the Senegalese has also spent too long on the treatment table and only made four appearances for the club last season.

The versatile Michael Antonio played a handful of games up front but his use there was more an indication of the Hammers' problems in this area rather than a tactical move.

A host of other players have been signed, loaned, and sold throughout the past few seasons. But Slaven Bilić is yet to find a reliable centre forward who will put up good numbers in terms of minutes on the pitch and productivity in front of goal.

This inconsistency in playing personnel led to inconsistency on the pitch, and there were times during the 2016/17 season that they dabbled with the relegation battle.

It's why they’ve been linked with numerous names this transfer window, including Javier Hernández, Michy Batshuayi, Kelechi Iheanacho, and Olivier Giroud.

But the most recent of these links, Burnley striker Andre Gray, is plausible and would be the best fit of those reportedly a West Ham transfer target.

Gray scored nine Premier League goals from 26 starts for the Clarets last season. However, he missed four games earlier in the season due to an FA suspension after the unearthing of offensive tweets posted several years ago.

Gray is the clear leader in terms of time on the pitch when compared with the forwards on West Ham’s books last season.

He completed 2,267 Premier League minutes with Carroll next on 1,314, with Antonio the next in line having played 667 minutes up front.

This dependability and relatively clear injury history mean that Bilić should take a serious look at the striker to see whether he could fit into the type of team he wants running out at the London Stadium.

And speaking of running, this is one of the aspects of the game in which Gray excels. 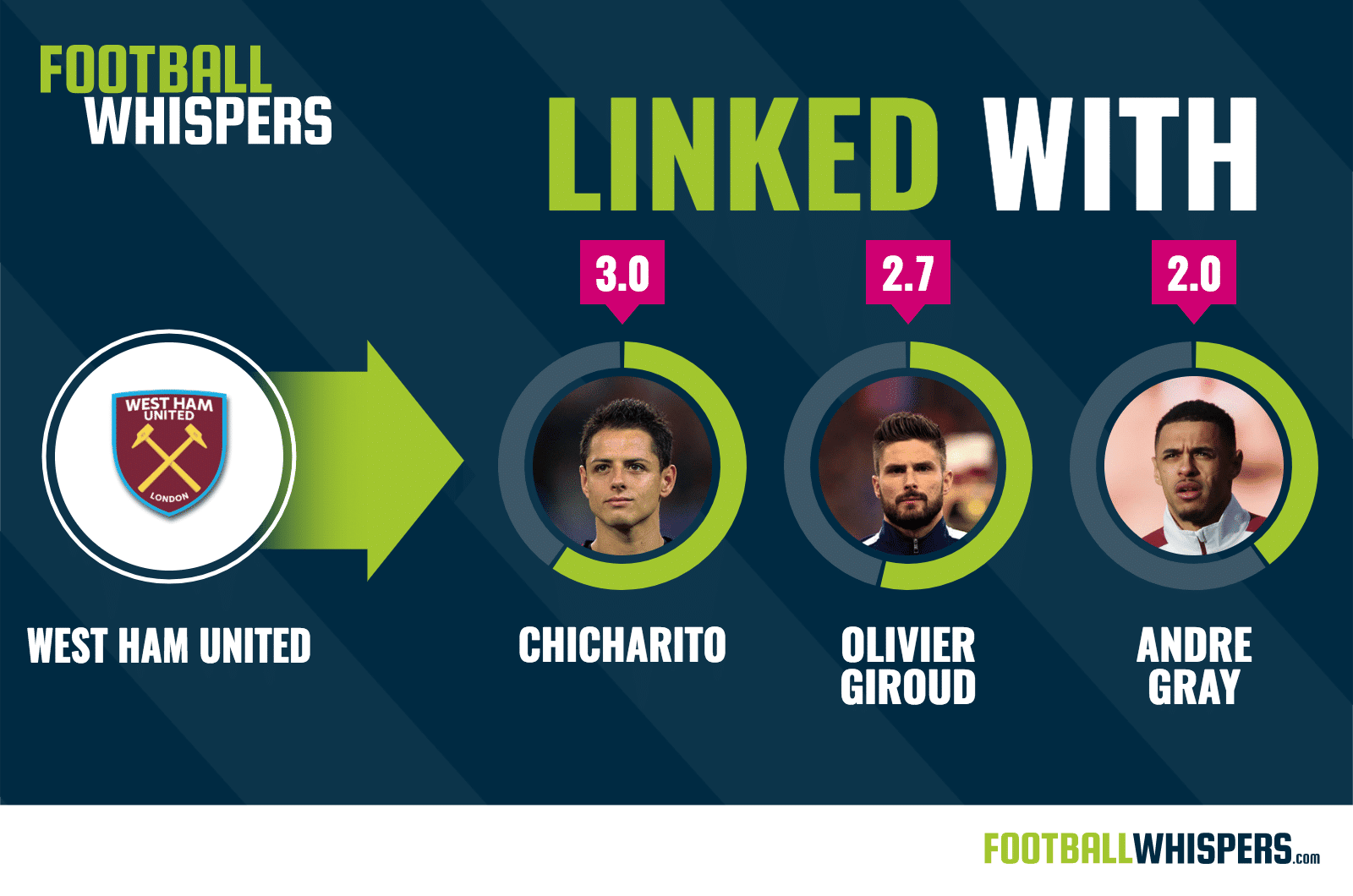 While it’s useful to have a targetman such as Carroll to occupy defenders, bring others into play and bag the occasional goal, there is nothing which worries an opposing defender more than blistering pace.

Gray has this in abundance and has used it effectively playing alongside a bigger strike partner in Sam Vokes in the last couple of seasons at Turf Moor, striking up a dangerous partnership with the Welsh international.

Something else which might make Gray the most realistic of West Ham’s targets is his contract situation. He only has one year left on his deal with Burnley. If the Hammers come in with an offer the former Brentford hitman could have his head turned.

It also West Ham could secure his services for a price lower than the market value, as Burnley's bargaining position will be significantly weaker in the final 12 months of Gray's contract.

It’s possible that Bilić may need more than one striker to sort these lingering problems, so two of the aforementioned targets could be needed. But getting Gray on board would be the first step in the right direction.

If Sakho can put his injury problems behind him, and Carroll can enjoy more minutes on the field, then the Hammers would boast a strong forward trio to better last season's disappointing 11th-place finish.

West Ham are one of those Premier League teams who find themselves in a difficult situation – and one where it’s difficult to judge success. There are high expectations from an ambitious set of fans and owners but enough realism to know that finishing in a Europa League qualifying place is a tough ask.

The aim should be a Europa League place next season and if that is secured with success in one of the cups then all the better.

Signing players in their prime, such as the 26-year-old Gray, would be a big statement of intent from Bilić and West Ham who have tended to sign players either past their best or carrying baggage in recent times.

Proving that you can cut it in the league with regular top half finishes and progressing in domestic cups, while also putting on the occasional show on the continent, should be the aim for West Ham and Gray would help the east Londoners do that.