André Gomes' career has been anything but uneventful.

By the time he joined Valencia in 2014 at the age of 21, he'd already won a domestic treble with Benfica and had been on the losing side in two successive Europa League finals.

Two impressive years at the Mestalla were followed by European Championship glory with Portugal.

Just a few weeks later, he was off to Barcelona. Having only turned 23, he seemed to be on the precipice of greatness. Or, at least, be part of something great, with the opportunity to feed the world's most devastating attacking trident in Lionel Messi, Luis Suárez and Neymar.

Unfortunately, Gomes could never make the Camp Nou his home, managing just 23 starts across two seasons, his peripheral status in Catalonia resulting in being left out of Portugal's 2018 World Cup squad.

Desperate to breathe new life into a career that once promised so much, Gomes last summer took the plunge and joined Everton on loan as part of the Toffees' three-player raid on Barça which saw Lucas Digne and perennially injured centre-back Yerry Mina also rock up to Merseyside.

Gomes has endured his own injury woes during his debut voyage through Premier League football but has still made a significantly bigger impression than the totemic Colombian, so much so that Tottenham Hotspur are looking to snatch the Portuguese from under Everton's noses.

He'd be missed at Goodison Park. The loanee was introduced into Marco Silva's starting XI in late October having missed the first chunk of the season through injury and quickly established himself as a regular starter after a string of composed performances.

Whereas Idrissa Gueye is the indefatigable ball-winner, Gomes is the deep-lying playmaker, bringing a sense of culture and helping to make smoother transitions from defence to attack.

Especially in midfield. Moussa Sissoko has been impressive but Victor Wanyama is tipped to leave in the summer and, with Harry Winks' persistent battles to stay fit, bolstering central midfield is a must this summer.

It's a fine line. While Spurs fans are thankful for Sissoko's regeneration (at one stage, Mauricio Pochettino wouldn't consider the Frenchman for selection) and hope Winks continues to progress, they appreciate the need for fresh recruits.

And Gomes seems to fit the bill as a tactically astute midfielder who can help with ball retention and providing the link between Spurs' centre-backs and more advanced players.

The Portugal international isn't always the most accomplished on the ball. He has been dispossessed 51 times in total this season which, for a player deployed as deep as him, is a slightly disconcerting stat.

Deployed in the role he's fulfilled at Everton, he also won't offer much in the final third (five shots on target all season, with just one goal and one assist) but there is a suggestion that Gomes can be hugely impactful further forward. 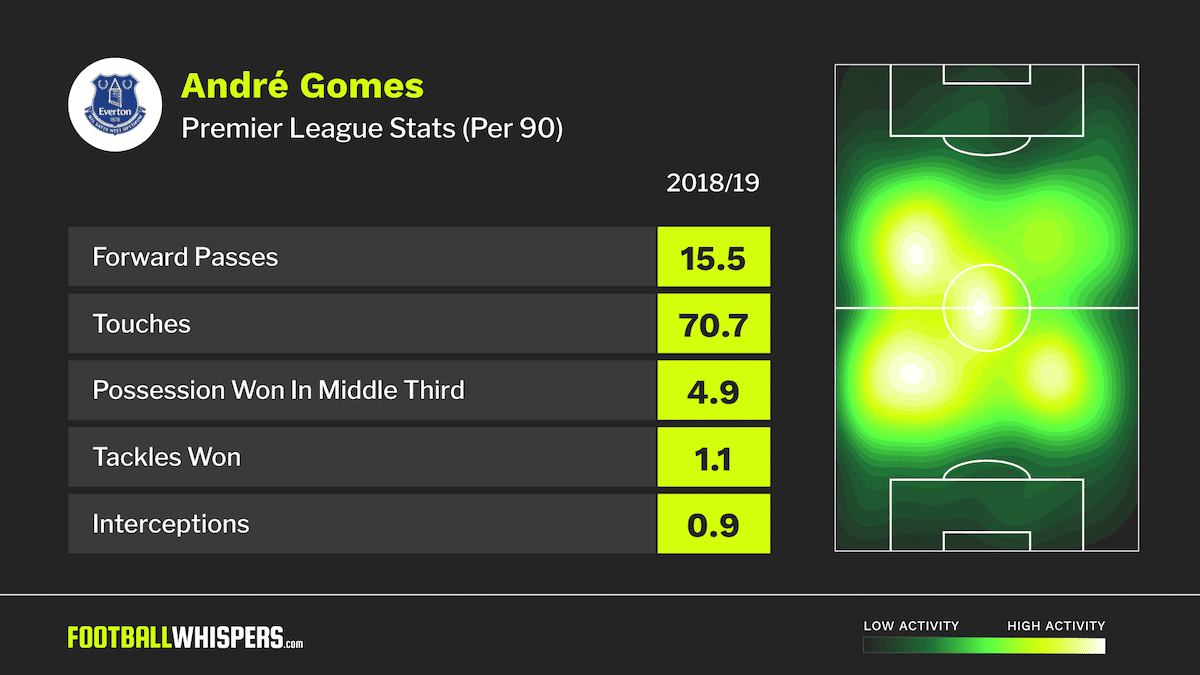 He was deployed in a more advanced berth earlier in his career, particularly under the guidance of Jorge Jesus at Benfica, and Pochettino may see him as someone who can slot into one of three spots behind Harry Kane (especially if Christian Eriksen departs).

Gomes' potential arrival isn't likely to set pulses racing among Spurs fans but given his natural abilities (Barcelona don't normally tend to splash £30million on anyone) and Pochettino's powers of man-management, it could be a worthwhile long-term investment.

Spurs fans may dream of Adrien Rabiot or Tanguy Ndombélé but they should not be so quick to dismiss Gomes. If anything, almost 17 months on from Lucas Moura's arrival from Paris Saint-Germain, they'll just be glad to see new faces coming through the door.

£30million may seem hefty. Sissoko was £30million, Lucas was £25million and Son Heung-min was £27million. Poch has turned all three of them into dependable first-teamers. We shouldn't doubt his ability to do the same with Gomes.