Looks can be deceiving in a footballer. If you caught sight of Anderson Talisca jogging onto the pitch for the first time, you'd be excused for expecting him to line-up in defensive midfield.

At nearly 6ft 3in, Talisca looks like a midfield metronome or an out-and-out target-man striker.

In fact, Talisca is one of the most exciting attackers in European football. The chances are, those who exclusively watch Premier League football have never heard of him. That's about to change, though, as Beşiktaş manager Şenol Güneş last week confirmed that the Brazilian is headed for England.

“Talisca was already gone at the winter break,” Güneş said. “I'm sorry that he won't be with us any longer. I wish he could stay for his sake and ours. He already had a deal in place.”

Then, sending the rumour mill into a frenzy, Güneş added: “He might be rivals with Cenk Tosun.”

Depending on where you get your transfer news, Talisca is either going to Liverpool or Manchester United.

There is logic to both, of course. Talisca has been a Liverpool transfer target for a while and, considering that Tosun plays for Everton, many have concluded that the ‘rivals' Güneş spoke of are, in fact, their city rivals.

However, reports over the weekend claimed that United had stolen a march on the Reds with a £35million bid. José Mourinho is a known admirer of Talisca, so it's feasible that the Portuguese coach has decided to act on his long-gestating interest.

Whoever ends up with Talisca is inheriting a prodigiously talented footballer, one who seems to be fulfilling his potential and is ready to make an impression on English football.

Talisca has spent the last two seasons on loan at Beşiktaş from Benfica, who he joined in 2014. His time in Portugal was trophy-laden (back-to-back league and cup doubles) but tumultuous.

Having been snapped up from Brazilian side Bahia in 2014, Talisca exploded onto the scene in Portugal with nine goals in his first ten games. From his performances, it was clear that Talisca was raw. It was also clear that he was unquestionably gifted.

Talisca proceeded to score 20 goals in 76 appearances for Benfica, but a dispute with the club's board over wages saw him leave for Beşiktaş. 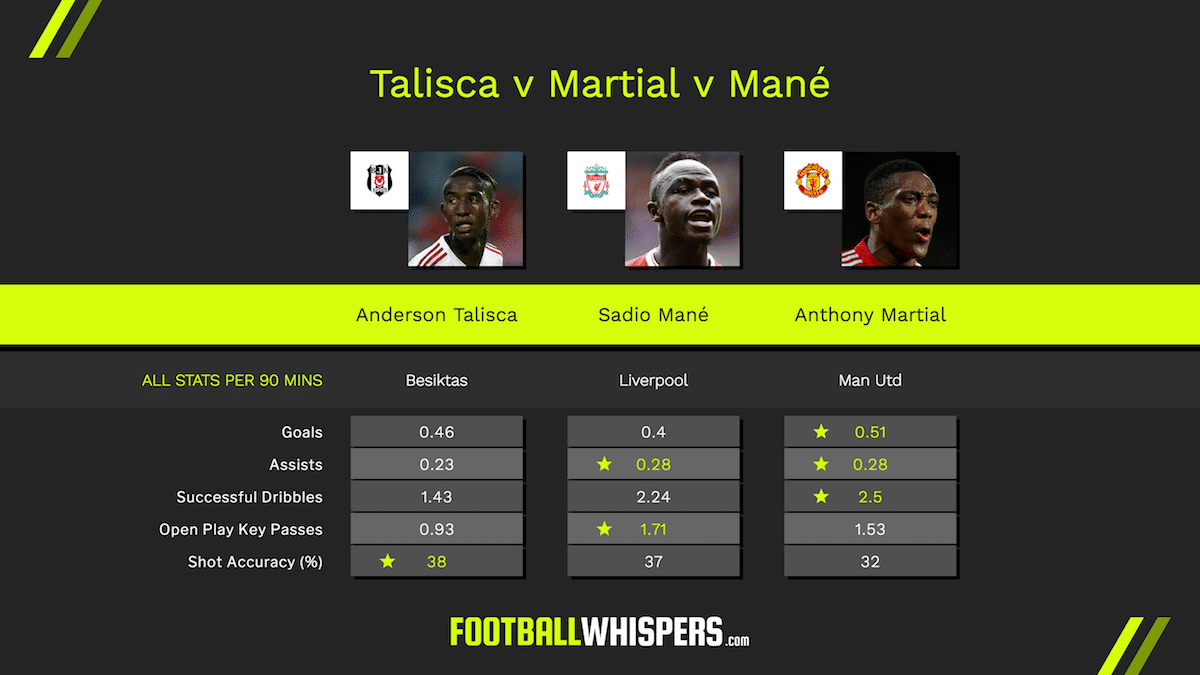 Take away Benfica's supposed financial mismanagement, though, and heading to Istanbul still came at a good time for the Brazilian. After a blistering start to life at Benfica, Talisca's form dipped and was subsequently pushed down the pecking order, falling out of favour under Jorge Jesus and his successor, Rui Vitória.

The sudden emergence of Renato Sanches in 2016 didn't help.

Coming of age in Turkey

But Talisca's two years on loan at Beşiktaş have proved immensely beneficial in his development. He scored 17 goals in 33 games in all competitions during his first year in the Turkish capital as Güneş' side clinched the Süper Lig title.

Under Güneş, Talisca recaptured his confidence. Operating predominantly as a No.10, the 24-year-old has excelled, offering Beşiktaş pace, craft and plenty of goals. While he has flourished behind the main striker, Talisca's pace and dribbling mean he is comfortable on either flank and it is perhaps that versatility and ability to change positions fluidly that makes him an attractive attacking package for potential suitors.

It's worth noting, too, that Talisca has also improved the defensive side of his game under Güneş. Not only has he matured, Talisca is a more astute reader of the game than he was when he broke through at Benfica.

Now more refined than raw, his consistency has been one of the reasons why he has improved his goals tally to 20 this season. He is also Beşiktaş' most productive creator with seven assists (three of which came in his side's 5-1 victory over Sivasspor on the final day of the season.

His form earned him a call-up to the Brazil national side in March but he remained uncapped after not being used in the friendlies against Russia and Germany. Unfortunately, Seleção coach Tite did not include Talisca in his World Cup squad.

What would he offer?

While Talisca likes to occupy the space between the opponent's midfield and defensive line, he is an effective penalty box player. His goal against Sivasspor came after he peeled away from his marker before planting an unerring header into the far corner.

As you can see below, he is five yards outside the area as the ball is played wide to Ryan Babel. 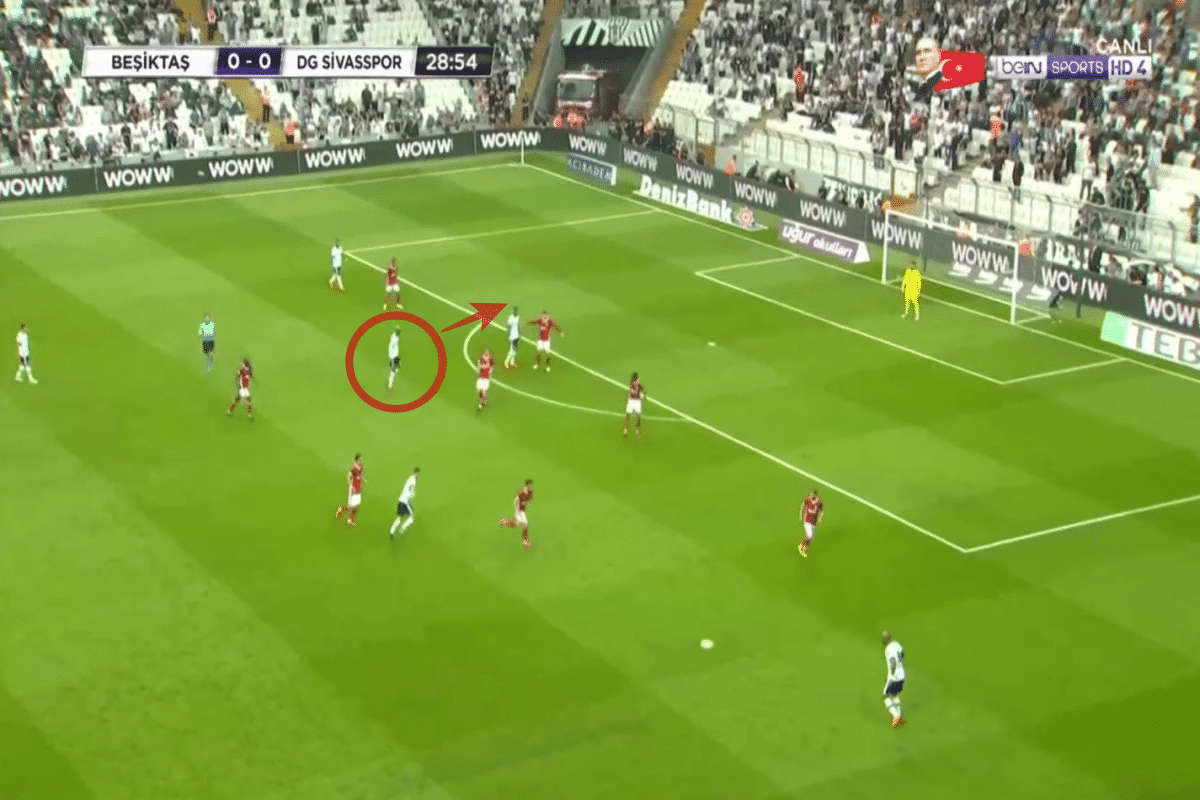 As Babel plays the cross, Talisca makes his move. 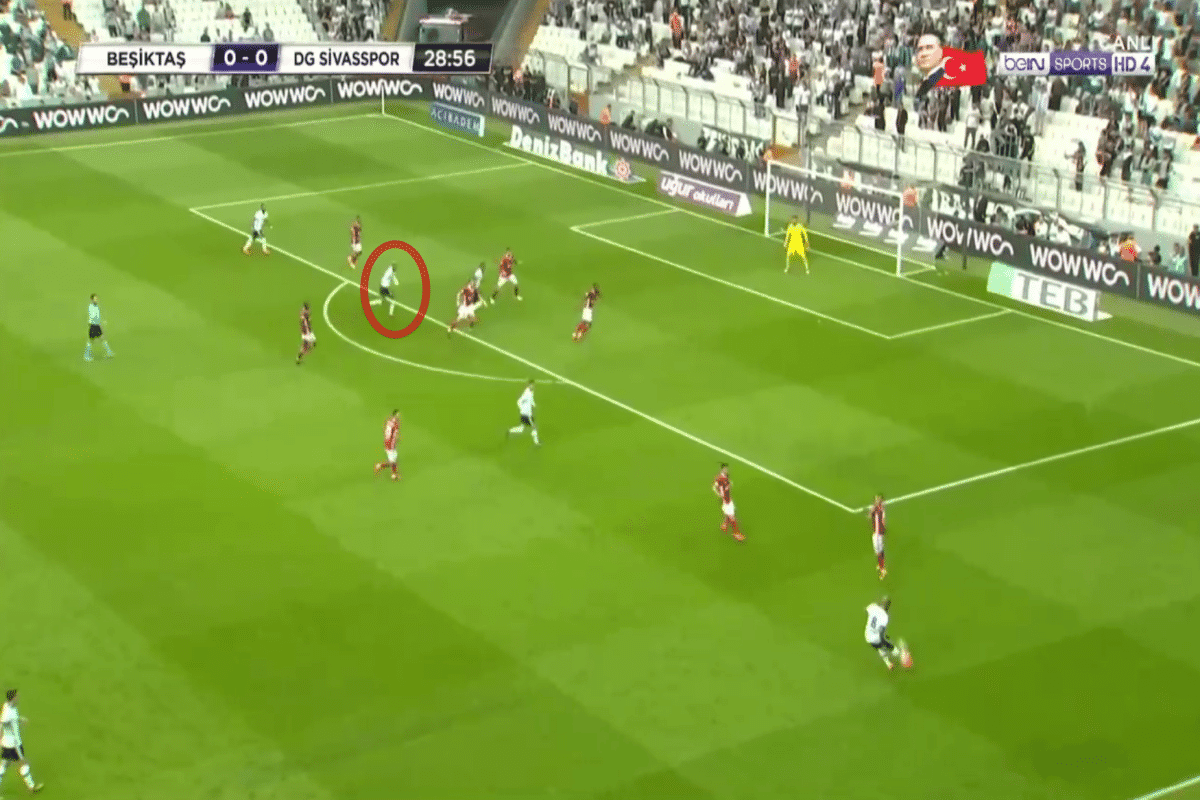 Thanks to some slack marking, he finds the corner to open the scoring. 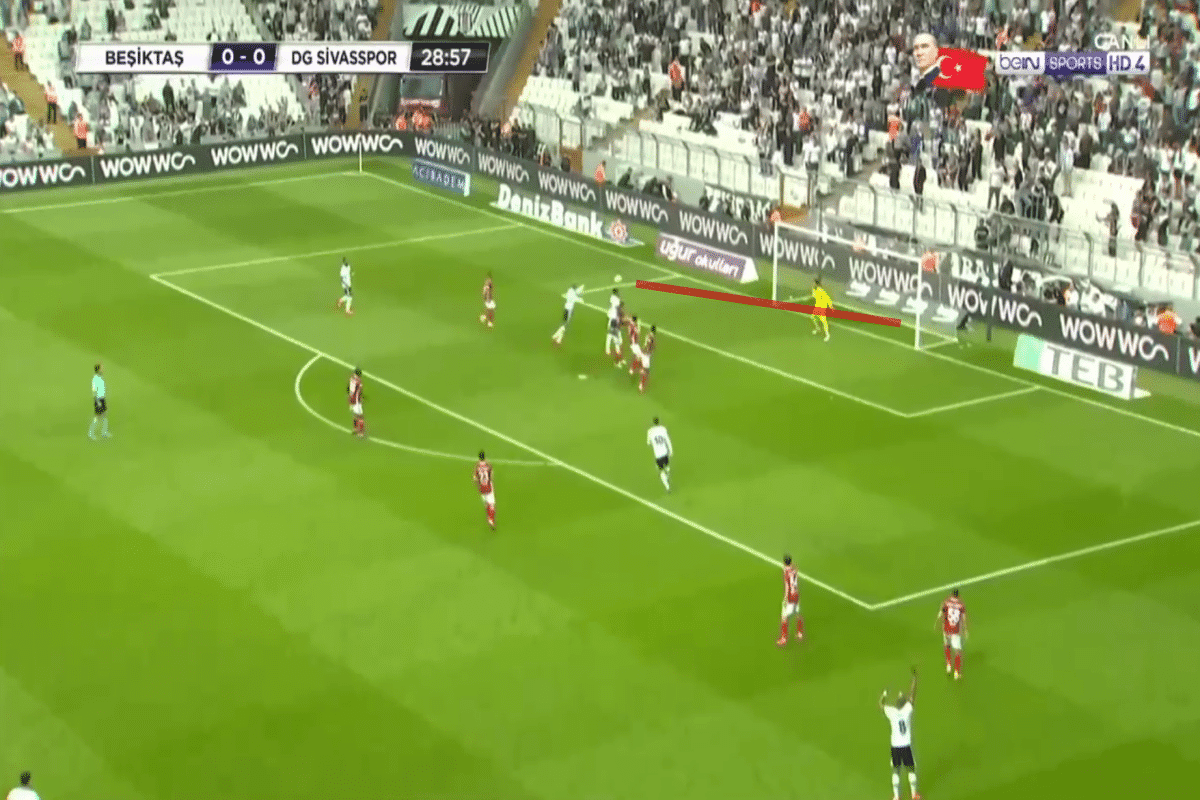 His previous headed goal, against Yeni Malatyaspor, was a different creation. Spraying a delightful pass out left, Talisca's next move will have been noted by scouts. 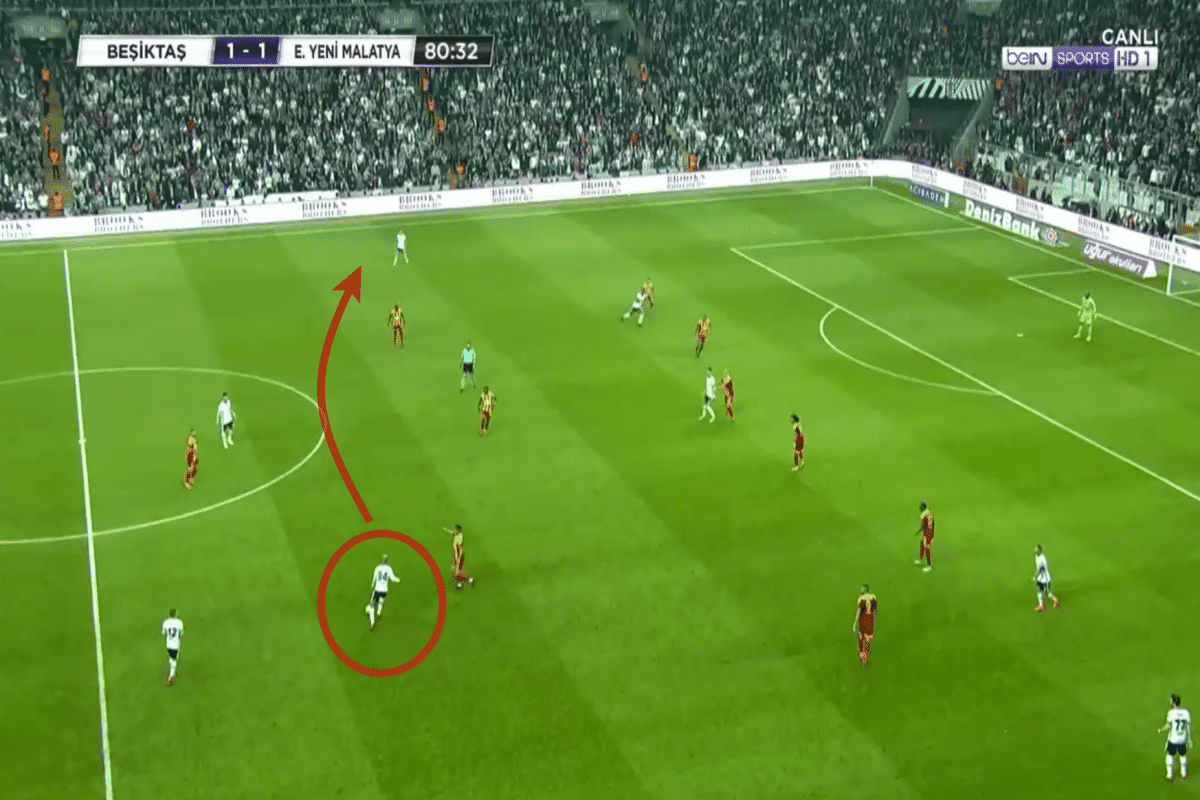 Instead of admiring his pass, he charges into the space ahead, making sure he is well-positioned for the cross. 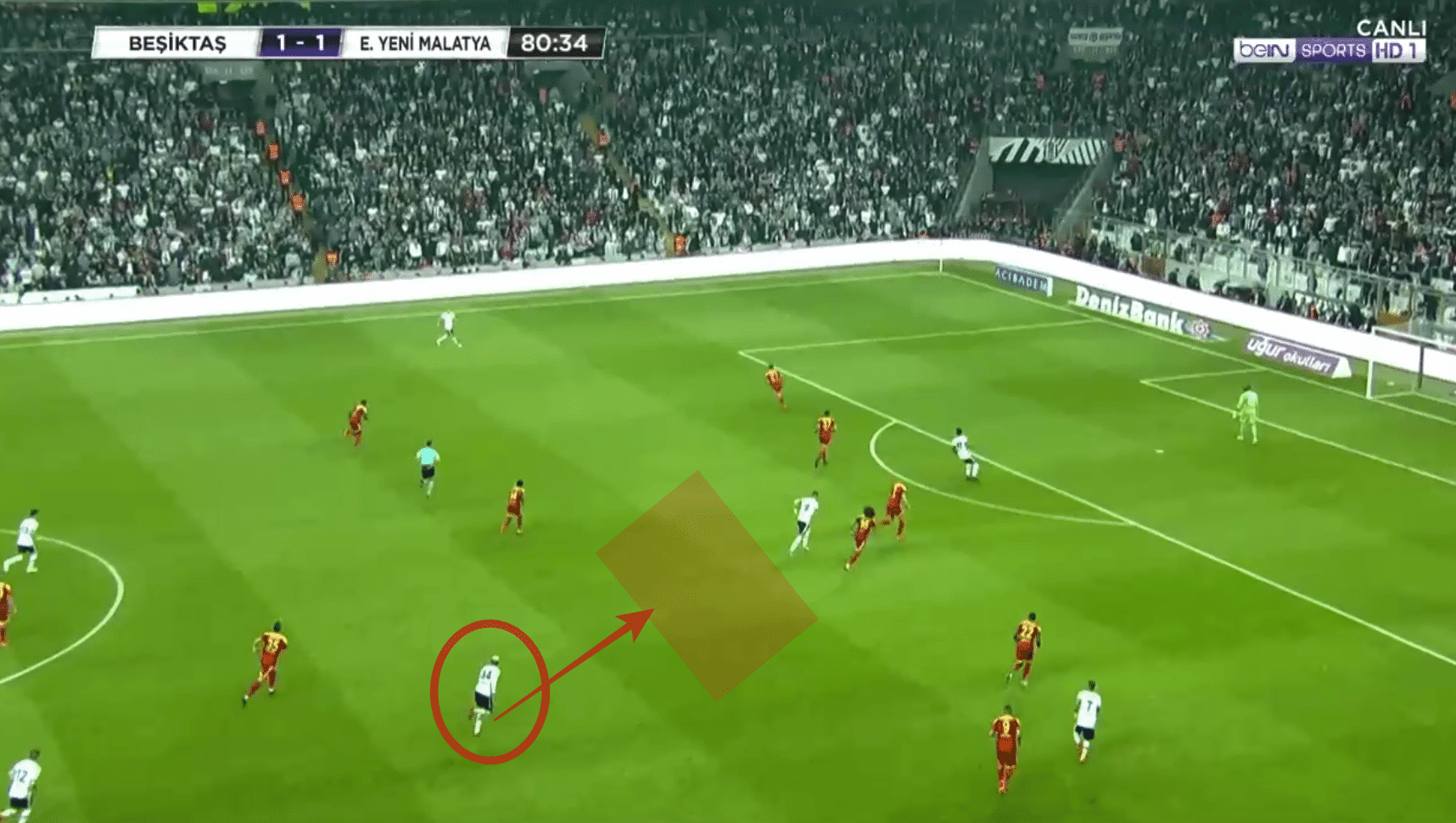 Having darted into the box, Talisca outjumps two defenders and glances a header to the far corner. One move with a bit of everything: vision, technique, pace, power and clinical finishing. 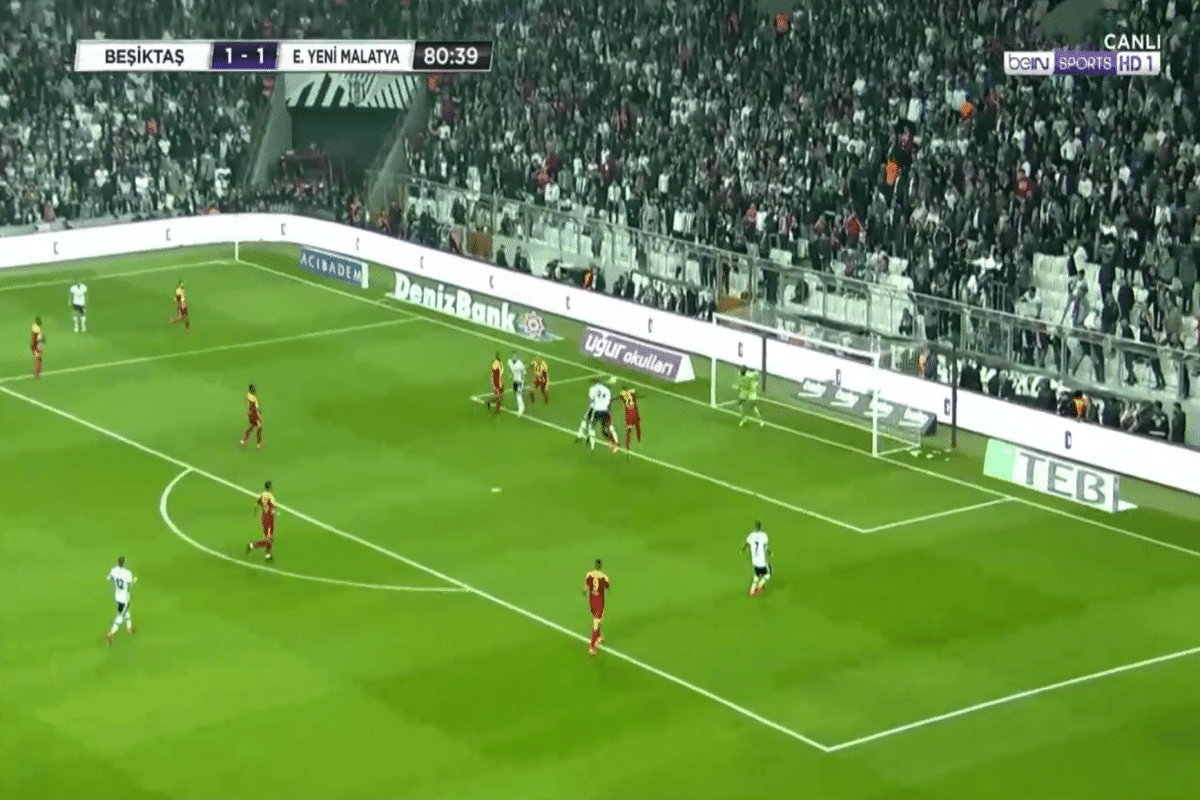 Talisca is noted for his long-range shooting and creativity, so it's interesting that half of his 20 goals this season have been headers, suggesting that he has capitalised on his deployment in a central role to make runs into the box and get on the end of crosses.

But his left foot is undoubtedly Talisca's deadliest weapon. A tremendous long-range shooter, he has also shown real quality from set-pieces, something his parent club found out when, in September 2016, he scored a 93rd-minute free-kick in the Champions League group stage (peculiarly, there was no clause written into Talisca's Beşiktaş contract which prevented him from playing against Benfica during his loan spell).

Talisca scores because he shoots. His average of 4.51 scoring attempts per 90 is the highest in Turkish football and, while his shooting accuracy is 37 per cent, 20 goals is hardly the mark of a wasteful player.

Talisca's performances in the Champions League suggest he is not intimidated by the big occasion. The Brazilian scored four goals in this season's group stages as Beşiktaş surprisingly topped a group containing Porto, RB Leipzig and 2016/17 semi-finalists Monaco.

Having matured in Turkey, Talisca, at 24, seems to have matured to the point where he could take the Premier League by storm. £35million would be a significant investment but, on the basis of Talisca's last two seasons, it would be a sound one.