Celtic bounced back from their 5-0 defeat at home to Paris Saint-Germain in the opening round of Champions league group stage fixtures by thrashing Anderlecht 3-0 in Brussels.

The Scottish champions out-classed their hosts and sealed what will be a crucial three points, with both sides, in all likelihood, set to contest third place in a group which includes PSG and Bayern Munich, thus a Europa League place is at stake.

Celtic manager Brendan Rodgers devised the perfect game plan to dismantle Anderlecht, and his players executed it brilliantly. Here are our five tactical takeaways from the game.

Brendan Rodgers had clearly identified a weakness in Celtic's Belgian hosts ahead of the game, and the Northern Irish coach concocted a simple, yet effective, plan to exploit it.

Anderlecht's Romanian right wing-back Alexandru Chipciu showed a tendency to push forward at inopportune times and, even when positioned well to begin with, an inability to defend the space in behind himself.

With flying full-back Kieran Tierney and former Swansea City and Chelsea winger Scott Sinclair deployed on the left flank, Celtic were well equipped to take advantage of this glaring chink in the home side's armour.

The Bhoys looked to break into the left channel at every opportunity, with Sinclair or Tierney, depending on who was best placed to do so at any given time, constantly threatening to chew Anderlecht up in the under-guarded zone with their pace and fine deliveries.

And this is exactly how the game's opening goal materialised, with Tierney breaking ahead of the ball down the left and played in by a perfectly-weighted pass from Olivier Ntcham. The Scottish full-back then whipped in an inviting low cross to give Leigh Griffiths an easy finish.

Celtic's Proactive Approach Made Them Look At Home

The Belgian champions are struggling domestically and appeared to lack confidence against Celtic, something the Hoops were ruthless in profiting from.

Rodgers' men enjoyed the lion's share of possession (63.5 per cent, to be exact) against Anderlecht, and were bold in the way they strung passes together deep in enemy territory. The manner in which Celtic proactively took the game to their hosts made the Scottish champions look like the home side for large stretches. 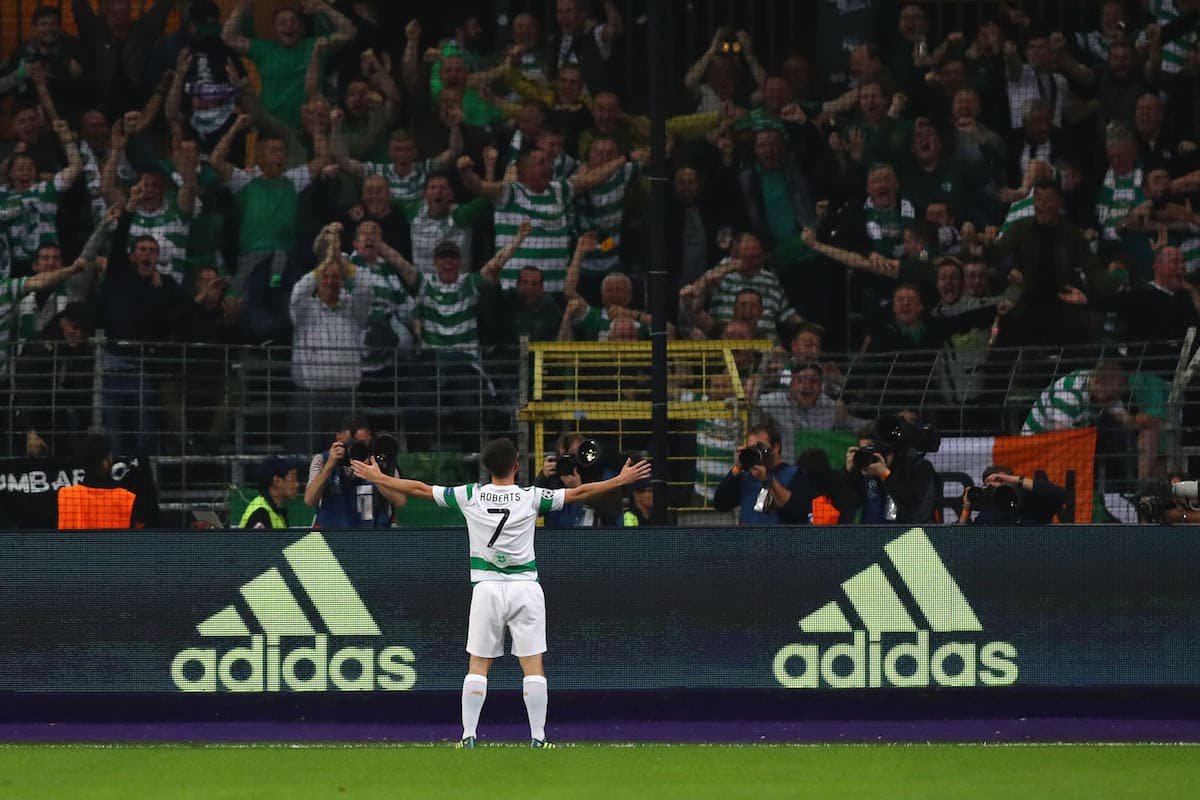 They also pressed diligently and cohesively when possession was lost, forcing Anderlecht to cough the ball up right back to them, and ensuring that pressure was maintained, even after taking the lead.

In the build-up to Celtic's second, which will go down as an own goal by Kara Mbodj, was a result of Patrick Roberts putting the Anderlecht backline under pressure and forcing an error.

Even after going 1-0 down in the first half, Anderlecht look abject, lacking in energy and disinterested. The home side seemed happy to allow Celtic time and space on the ball, and would have been well served to adopt a similar pressing strategy to that which their hosts were using.

With little urgency, the Belgians failed to really trouble Celtic until the final 20 minutes, by which point they were 2-0 down, and, even then, it was a relatively comfortable night's work for the Bhoys.

Perhaps expecting to be afforded the same grace with which they greeted their visitors, Anderlecht were sloppy and out of sync when on the ball, rushed into making basic errors which were mercilessly punished by Celtic.

Leading the line for the Bhoys was Scottish international forward Griffiths. The 27-year-old former Wolverhampton Wanderers man worked hard off the ball, helping Celtic defend from the front by ensuring the Anderlecht defenders weren't allowed to settle in possession, but it was his astute movement in attack that was most valuable.

He timed his entry into the box to perfection to net a simple finish for Celtic‘s first goal, latching on to Tierney's pinpoint centre, arriving at the back post unmarked.

However, it was Griffiths' knack for creating space for himself and team-mates, although more subtle and not always glaringly apparent, that was crucial for the away side.

The 15-cap Scotland man would push his marker deep by holding a high position to create space in the No.10 zone for Tom Rogic, and would drop away from the front line before spinning back in behind to outfox the Belgian defence and offer himself as an outlet when Celtic looked to counter at speed.

Brown And Ntcham An Intelligent Tandem In Midfield

Ntcham, a £5million summer signing from Manchester City, endured a difficult first half in which his touch was often found to be a little heavy and his passes slightly overcooked.

But the 21-year-old Frenchman's positioning was sound throughout, and the way he and Brown guarded the back four and ensured that the ball was circulated quickly and effectively inside the Anderlecht half was a major factor in Celtic's dominance.

Ntcham's performance improved greatly in the second period, while Brown, master of the central space, was typically reliable throughout. The understanding between the pair, with a recognition of each other's positioning and ability of one to sit while the other pushes up, showed the makings of a top-quality double pivot in midfield.

Anderlecht lost star midfielder Youri Tielemans to Monaco over the summer, but they managed to retain gifted Manchester United transfer target Leander Dendoncker. The fact that, even with the Belgian international's presence, Celtic were able to control the centre of the pitch away from home is credit to Brown and Ntcham's fine work and developing partnership.