For all the talk of tough love this season, as soon as Jose Mourinho walked through the doors of Old Trafford, he would have fallen head over heels for Ander Herrera.

Behind that cherubic face is a snarling pitbull of a player who has been let off the leash by Mourinho as a midfield patroller rather than playmaker this season.

In the Spaniard, Mourinho found someone under-utilised by the two previous failed regimes at Manchester United, but who possessed an edge in a squad that had gone soft since Sir Alex Ferguson’s departure.

While it would be a stretch to say Herrera is the first name on a Mourinho teamsheet with the Paul Pogba and Zlatan Ibrahimovic show reaching a crescendo, the two would have undoubtedly found it tougher without the pocket pooch.

From cult hero to captain material – his rise is worth studying.

United’s interest in Herrera had been apparent since he helped produce the first Europa League embarrassment at Old Trafford with Athletic Bilbao in 2012.

David Moyes then tried and failed to sign him – even with the help of three imposters – before, in June of 2014, the Basque midfielder finally put pen to paper under Louis van Gaal.

Given the change – read tumult – at Old Trafford during that time it is of little surprise that there was no concrete plan in place for his arrival.

He had played primarily as a No.10 at Athletic in 2013/14, though was not unfamiliar with being either the attacking or defensive-minded body in a midfield two.

But it was not until the latter stages of the season that Herrera had carved out a niche, paired up with Juan Mata on the right-hand side of a 4-1-4-1 that saw United enjoy a rare purple patch under van Gaal. 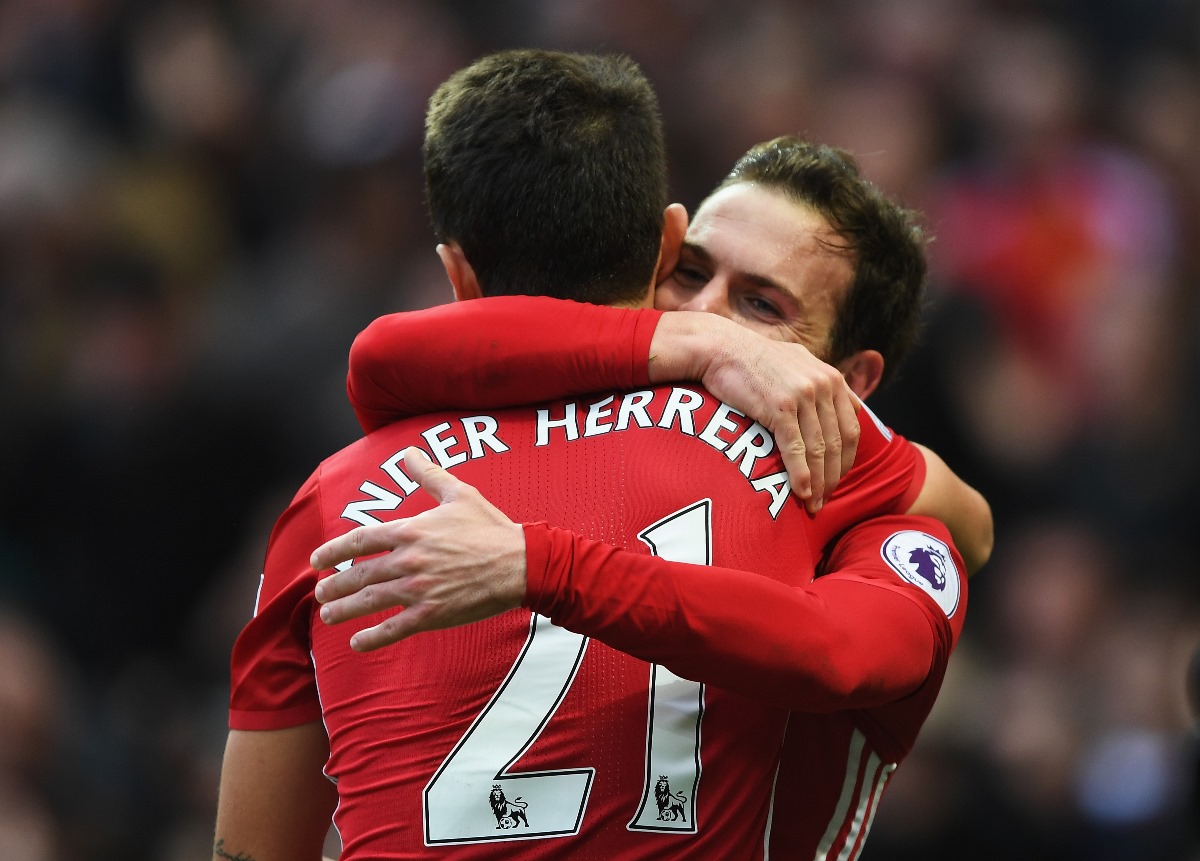 Only he hadn’t. Despite being part of stellar victories against Liverpool, Manchester City and Tottenham Herrera took a backwards step as for the most part, new signing Morgan Schneiderlin was preferred and sucked all the life out of midfield.

Indeed it is easy to forget just how immobile United’s midfield were at times last year – Schneiderlin an ineffective version of a far more capable but physically limited Michael Carrick, and Marouane Fellaini throwing his afro and elbows about.

Herrera, with all that energy and focused aggression, was often left muzzled on the bench.

Herrera has been nothing if not adaptable during his career and Mourinho, to his great credit, finally earmarked a role for the 27-year-old this season – as a defensive midfielder.

Fellaini was initially preferred alongside Pogba as Herrera got to grips with his task but has become indispensable since the 4-1 thumping of reigning champions Leicester City in September. His first international call-up came little more than a fortnight later.

“I’m here [with the Spain squad],” said Herrera, “because Mourinho’s given me the chance to take a new role. It’s more defensive: hold my position, don’t lose the ball, win it, bring it out fluidly, that ‘rest defence.'”

Enthusiasm can only get you so far, of course – if you can’t position yourself or time a tackle (think back to Alan Smith) then all that excess energy will amount to hot air.

But Herrera had always been a Duracell bunny. Even while playing higher up the pitch for Bilbao in the season before he joined United, he averaged a superb 3.1 tackles per game.

And the graphic below suggests just how well the 27-year-old is doing up against his peers. 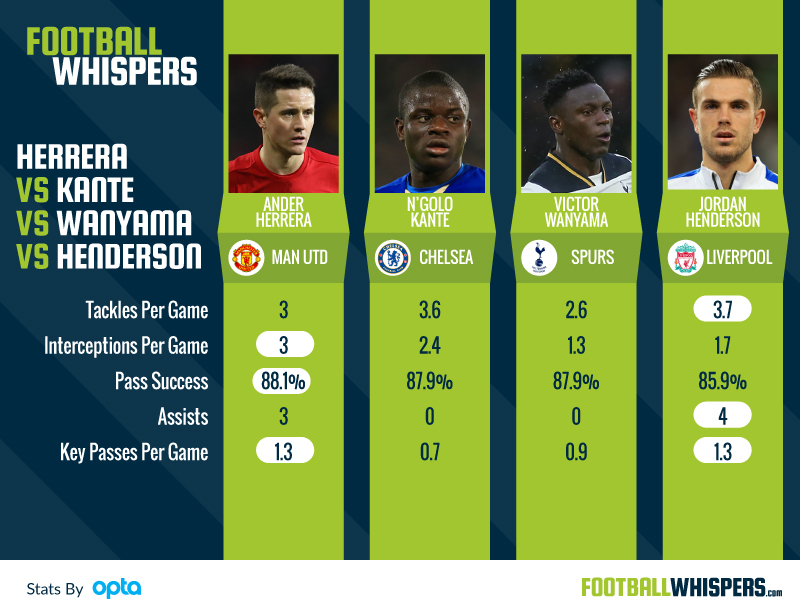 While N’Golo Kante is rightly receiving the plaudits for a runaway Chelsea, United fans have no need to look longingly at the French destroyer when their Spaniard does all that while adding a touch of silk.

Herrera’s contributions more closely mirror what Jordan Henderson is providing for Liverpool – the England midfielder’s name is often mentioned with a smirk outside Anfield, but he is rightly one of Jurgen Klopp’s most treasured assets.

But even here it can be argued that Herrera is the most effective all-action midfielder. His pass success rate exceeds not only Henderson’s, but the defence-first Kante and Tottenham’s Victor Wanyama. That is extremely impressive for a player who demonstrably remains a creative presence.

Since Nemanja Vidic’s departure, United have lacked a leader who brushes up – and occasionally ends up – on the wrong side of the law. In midfield, Michael Carrick is the strong, silent type in every way Roy Keane wasn’t.

No one is going to be intimidated by Herrera in the tunnel – it would have been hard to imagine him squaring up to Patrick Vieira – but when he crosses the white line and the shackles come off, it is a different story.

Whereas Keane had a more menacing bite, Herrera will never stop nipping at your heels and the end result is the same. A constant irritant in midfield. 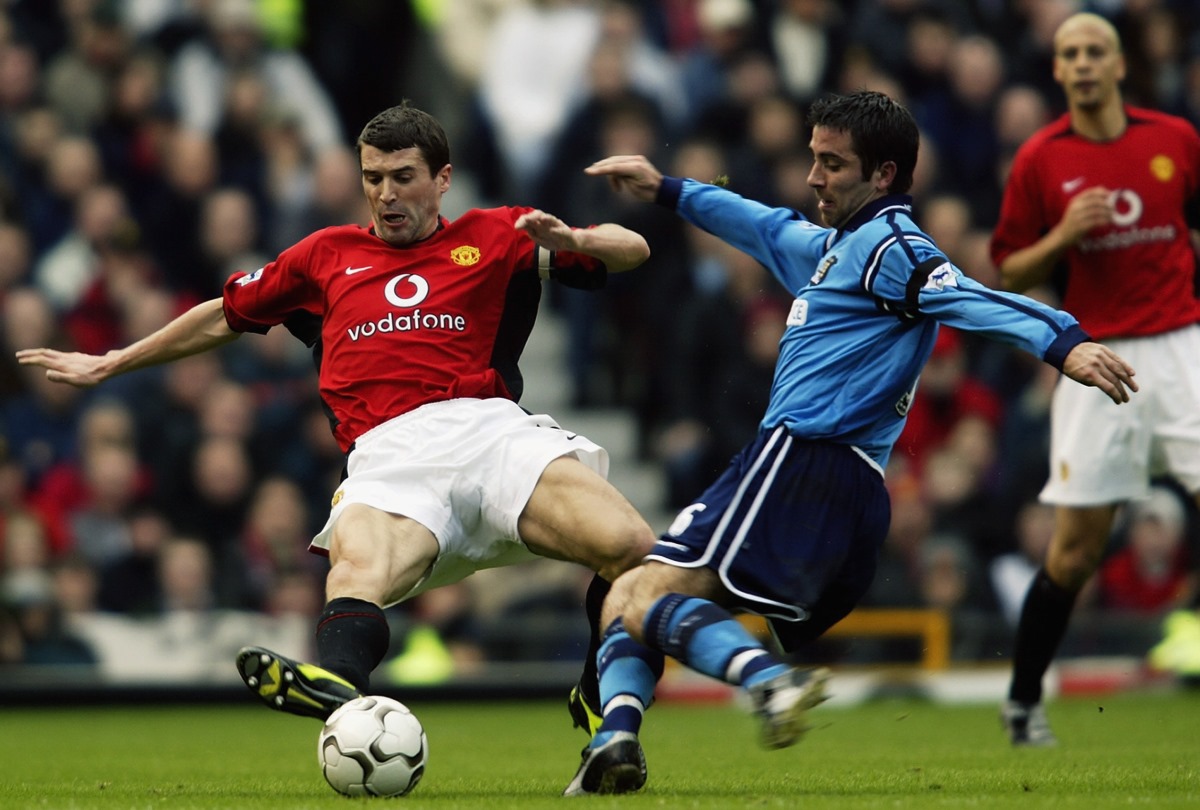 While yellow cards are hardly a badge of honour, Herrera’s nine so far this year have given United’s midfield a serrated edge not seen since the days of Keane.

Regarded as one of the most committed trainers in the club, Herrera says all the right things, too.

“There is no space for polemics in my vocabulary,” he explained in a recent interview. “I just want to win games for Manchester United. I don’t care about other teams. I play for the best. I am very, very happy with the way United fans show their affection to me.”

With Wayne Rooney’s time coming to an end at Old Trafford, the captain’s armband will be up for tender and Herrera has delivered the best bid so far this season.

If he succeeds, after more than a decade of waiting, United will have found a midfield general missing since the dishonourable discharge of Keane.

THE TRANSFER WINDOW IS CLOSED BUT FOOTBALL WHISPERS REMAIN OPEN FOR BUSINESS – CATCH UP ON EPISODE 12!