Of the many expected departures from Manchester United this summer, Ander Herrera's will arguably sting the most.

The Basque midfielder, who joined from Athletic Bilbao in 2014, has announced he will leave the club after failing to extend his deal with the club.

This current United crop is filled with players who often look as though they'd rather be playing somewhere else. Herrera was a breath of fresh air in that sense. You weren't guaranteed showmanship or pizzazz with him, but you were guaranteed passion, leadership and consistency.

United's recruitment team – which hasn't exactly covered itself in glory in recent years – face a serious examination of their credentials in securing the 29-year-old's replacement.

It'll be tough, and not because United can't immediately offer Champions League football to potential targets; no, because there aren't many like Herrera.

But there are players with largely similar skill-sets. Here, we look at five who could realistically join United this summer and who could ably fill the void left by the No.21's departure.

And it's worth mentioning before we get started that we've tried to align this with United's newly adopted transfer policy of targeting players who can offer longevity because of their age (Aaron Wan-Bissaka, Sean Longstaff and Daniel James are all 21, for example).

So that would rule out obvious candidates such as Idrissa Gueye, to whom United have been linked. The Everton man is an accomplished ball-winner but will turn 30 in September.

Rumours have swirled over the 25-year-old's future recently, with reports claiming that he has a £44.1million release clause in his contract.

Partey would be a smart addition for United. Having caught the eye in both LaLiga and Champions League action for Atleti, he has proven himself at the highest level; something Fred has, so far, been unable to do.

A steady, disciplined presence in midfield, Partey makes few errors and is an effective ball-winner, having gained possession in midfield on 72 occasions this season.

Tall, powerful and boasting impressive balance, the Ghanaian doesn't give up possession easily either. He also offers a goalscoring threat from distance having scored three times from outside the box this term.

At 25, Partey still has his best years ahead of him – and he certainly has the tools to ably fill the void left by Herrera's departure.

Højbjerg is one of several Southampton players to have improved following Ralph Hasenhüttl's appointment in December.

The 23-year-old, who joined from Bayern Munich in 2016, has starred under the Austrian, notching four goals and three assists after having failed to score or create at all during his first two years in England.

Although bright in the final third, Højbjerg's remit would be geared more to shielding the defence at Old Trafford. 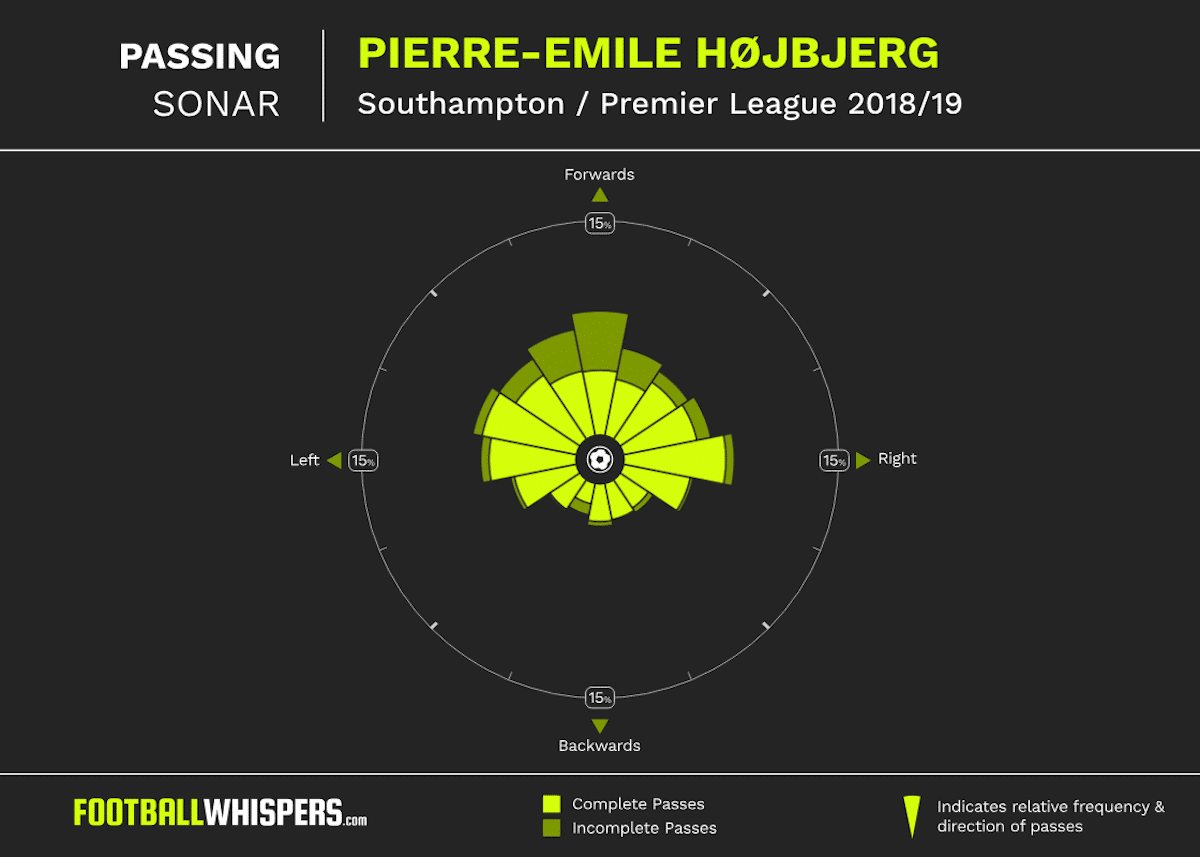 Luckily, he excels in such a role. This season, he ranked inside the top ten for tackles, interceptions and possession win in midfield. In fact, for the latter, his per 90 average of 5.34 was surpassed by only one player.

A forward-thinking passer with a tidy all-round game, the Denmark international could be an intriguing option for United, should they decide to focus their search on the Premier League.

A composed midfielder, the 23-year-old relishes defensive duels, winning 192 (ranked fourth) compared to 154 lost in the Bundesliga this season.

He is also as high as third in interceptions attempted per 90 minutes with 2.7 while his 1.87 tackles won puts him 13th.

Grillitsch has an excellent first touch and can spot a pass, whether it's a heat-seeking diagonal or a piercing through ball that breaks the lines of the opponent.

A solid defensive presence who can also contribute to the build-up, the Austria international could be a revelation in the Premier League.

Although his price-tag would be heftier than any other player on this list, the 21-year-old has the potential to become one of the world's finest midfielders.

And United fans may well remember the Uruguay international. He could be found quietly running the show as Juve beat United at Old Trafford in the Champions League earlier this season.

Despite his abilities, Bentancur wasn't always in the first XI under Massimiliano Allegri, starting just 20 times in Serie A this season. Allegri has now stepped down as Juve boss, United may look to capitalise on the uncertainty at the club.

The former Boca Juniors man is accomplished in possession, helped by a tall, slender frame that allows him to ride challenges and get his side further up the pitch.

According to the Manchester Evening News, Rice is one of several players interesting United.

It's not hard to see why. The 20-year-old's ascent at West Ham has been hugely impressive, making his debut at the end of the 2016/17 season before proceeding to firmly establish himself as one of the first names on Manuel Pellegrini's team sheet (he started 34 of 38 Premier League games this season).

His stats are mightily impressive. Rice won possession in the defensive third 118 times during the 2018/19 league campaign, more than any other midfielder. He also ranked fourth for possession gains in midfield. 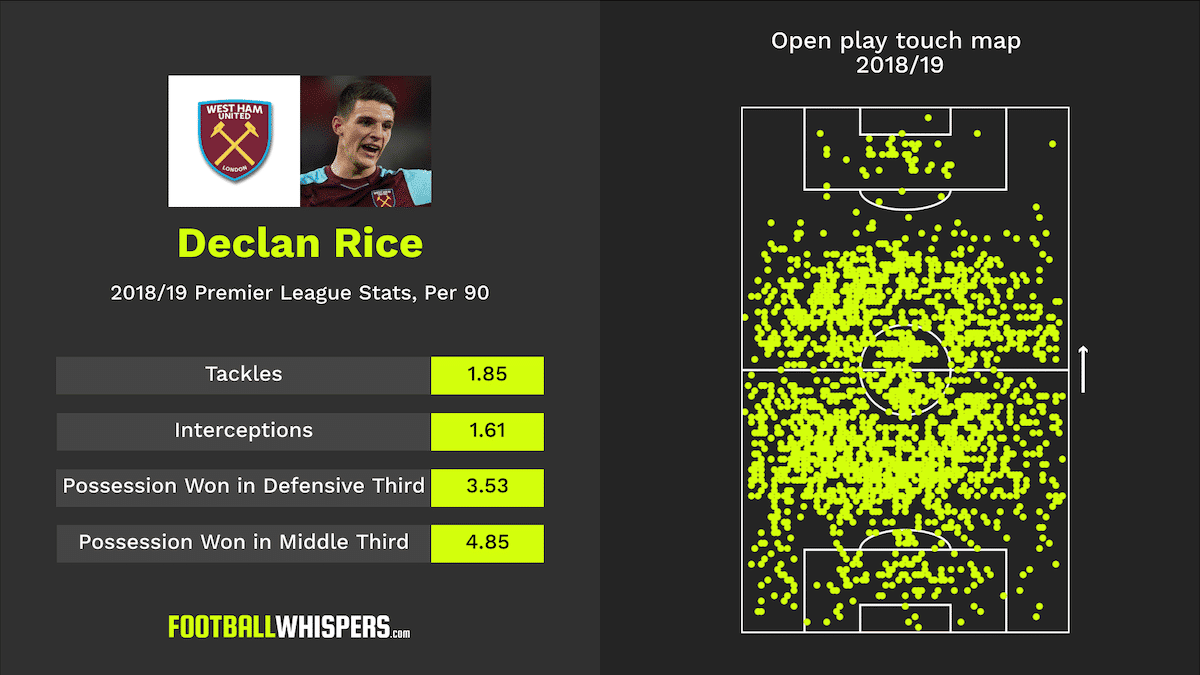 A hard-tackling, intelligent reader of the game, the England international ticks a lot of the boxes and his budding reputation was further enhanced with stand-out performances against the likes of Arsenal and Liverpool, ear-marking him as a ‘big-game player'. United fans love them, be it Herrera or Darren Fletcher.

Given that he is a promising young Englishman, though, West Ham are likely to demand a premium fee, somewhere likely in the region of £60-70million.