While the final day of the Premier League season tends to introduce us to some new faces, Old Trafford may showcase more than most this weekend as José Mourinho again prioritises the Europa League final for Manchester United.

The manager has said repeatedly in recent weeks that these are games he could do without, which is a curious stance for someone that has been so vocal in his criticism for European football’s ‘second tier’ tournament in the past. At least it would be curious if this wasn’t Mourinho we were talking about.

With that in mind a number of key players are set to be rested against Crystal Palace, though few have been more valuable to the Portuguese since his arrival than Ander Herrera.

It has been the Spaniard’s best season in a United shirt and his most involved campaign by a distance having failed to convince Louis van Gaal that he warranted a regular starting spot.

He has, after all, played more Premier League minutes this season (2,467) than any other by some margin, as it appeared that the 27-year-old’s time in Manchester could be up.

Mourinho quickly saw the benefit in keeping Herrera, however, and the midfielder has arguably been the club’s top performer in the current campaign, cementing a place among the first names on the team sheet.His tenacity and work rate in midfield has been crucial to a side that whilst underwhelming this season, does boast a solid defensive record.

Herrera’s role in protecting the back four has been pivotal to that and he leads by example in a way that no team-mate can really match in that regard. With averages of 2.7 tackles and 2.6 interceptions per game, the former Athletic Bilbao midfielder leads the side in both categories, while his fresh-faced appearance disguises the fact that the Spain international has a mean streak.

A figure of 1.5 fouls per game is level with the much maligned Marouane Fellaini after all, and while he’s no Roy Keane, Herrera is up for the battle in the middle ground and is surely a candidate to follow in the Irishman’s footsteps with regards to the United captaincy. Wayne Rooney is the current incumbent with 35-year-old Michael Carrick his understudy.

Both could call time on their Old Trafford careers before long and even so are unlikely to be anything more than squad players should they stay, so an heir to the armband is needed.

Chris Smalling has taken it in the past but has had a season of regression under Mourinho. There has been a favouritism towards Englishmen to captain the club but it may be time to move on. Herrera has the profile to fill the role.

He played down the possibility this month, stating on the suggestion that he could take the role: “It has been a surprise. I am very grateful that people value me like this but I don't think it is something that is going to happen soon.”

There is, however, little doubt that United's midfield enforcer has emerged as the obvious candidate from the current squad at least. He’s firmly established himself as a fan favourite in the current campaign, not only for his committed displays but also as a man for the big occasion.

Three of his five man of the match awards from WhoScored.com this season have come in matches against Liverpool, Tottenham Hotspur and, most recently, Chelsea. 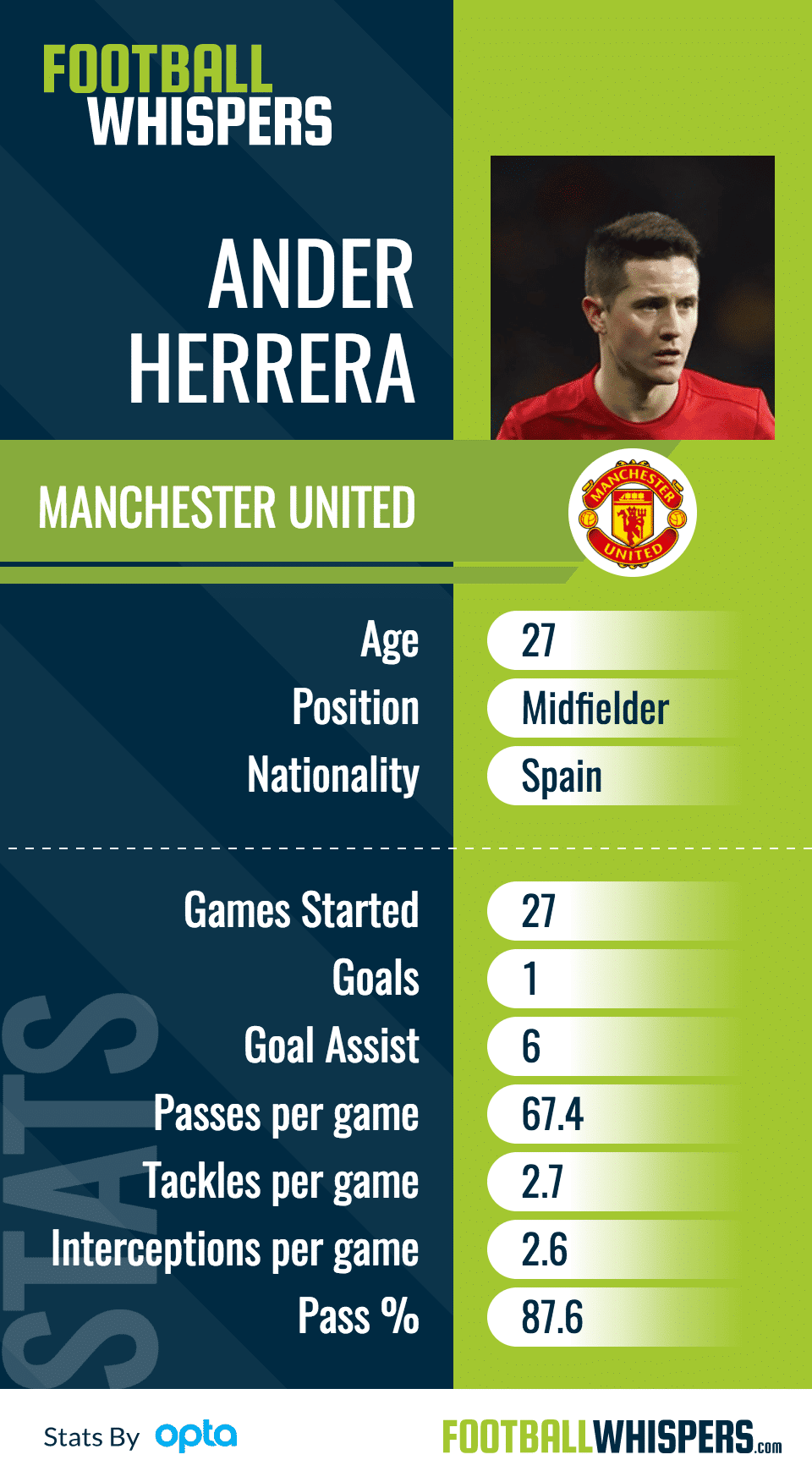 Herrera made seven tackles and a season-high of ten interceptions to put a halt to the Reds strong start to the season in the former whilst scoring and registering a superb assist in the latter.

It’s no wonder Mourinho wouldn’t want to risk the Spaniard this weekend as he’ll be expected to play an integral role in the Europa League final with Ajax.

For all of his impressive defensive work his vision is a side to his game that is often overlooked. No United player has registered more assists (6) in this season’s Premier League. Meanwhile, with an average of 67.4 passes per game and pass accuracy of 87.6 per cent, Herrera has all the attributes of a top class holding midfield player.

He could count himself a little unfortunate to have been overlooked for a player of the year nomination, particularly given that N’Golo Kanté picked up the award.

That’s not to say the Frenchman didn’t deserve the recognition, especially given that his contribution came in a title winning campaign, but in reality one could argue there wasn’t much to separate the two.

Kanté has produced more tackles per game (3.6) but Herrera edges it for interceptions and passes per game while offering considerably more by way of an impact in attack.

They aren’t the exact same type of player but that doesn’t change the fact that both are tasked with breaking up play and distributing efficiently. Both have been excellent in that regard but the United man has received nothing close to the fanfare of his Chelsea counterpart.

The debate as to the top performing midfielders has certainly seen Herrera somewhat overshadow £89million-man Paul Pogba this season and emerge as Mourinho’s most important player. He’s one that works tirelessly, isn’t afraid to speak his mind on the pitch and stands up to be counted on the big occasion.

That sounds like a captain, so maybe it’s time Manchester United offered the armband an overseas player. Nemanja Vidić did a good job, skippering Sir Alex Ferguson's last great side. Herrera is the heir apparent.