Since their takeover by Li Yonghong, AC Milan transfer targets have varied wildly from the purely speculative to the downright ridiculous. But their latest reported pursuit, of Real Madrid’s Álvaro Morata, falls nicely between ambition and realism.

The Spanish striker fought hard for regular football last season. In his first year back at Real Madrid, the club whose youth academy he graduated from, he made the most of his opportunities, hitting a noteworthy 15 goals in 14 La Liga starts.

However, that record was not enough for Morata to assert himself upon Zinedine Zidane’s first team. With Cristiano Ronaldo in fine form in front of goal and Karim Benzema providing movement, skill and imagination aplenty, a place in the starting line-up evaded the 24-year-old, and it may soon be time for a change of scenery.

Having emphatically shown his capability in and around the final third this term, a number of top European clubs are purportedly coveting his signature. Supposedly he is a Manchester United target, although Chelsea are also said to be interested.

But, if Morata wants to be more than a void-filler or a squad member, if he wants to be a star player, Milan should be his primary destination this summer.

The 2016/17 season was a successful one for Milan, if not by historic standards. While their past is filled with prestige, iconic names and major trophies, recent years have been barren of each of these aspects. As such, a sixth-place league finish was worthy of applause.

Not only did head coach Vincenzo Montella get them into sixth – and therefore return them to European competition for the first time in three years – but silverware was won in the form of the Italian Super Cup.

This positive narrative, however, was delivered without the presence of a consistent finisher.

Montella deployed a 4-3-3 formation throughout most of the campaign, with a front three generally led by Carlos Bacca. But the Colombian poacher was toothless and frustrated for large spells, ultimately hitting just 13 Serie A goals, his lowest tally for a full season since he moved to Europe in 2012.

To make matters worse, quality alternatives weren’t simply in short supply – they were utterly and completely absent. Gianluca Lapadula won hearts for his non-stop running, admirable work ethic and proclivity for the physical battle, but his lack of class at the top level was shown in his finding the net just seven times in 26 league outings.

He has since departed on loan to Genoa, where he should find more regular game time.

The increasingly productive Suso stepped up a gear, scoring seven and setting up nine, but Milan lacked genuine cutting edge in and around the opposition penalty box. Consequently, they ended the season with just 56 goals from 38 Serie A fixtures, the second-lowest tally in the top half of the table.

The limitations of Bacca were brutally clear within Milan’s system in the last two seasons. When the team decided to defend deep, he struggled with the isolation of leading the line alone, where his inconsistent touch, poor hold- and link-up play were exposed. 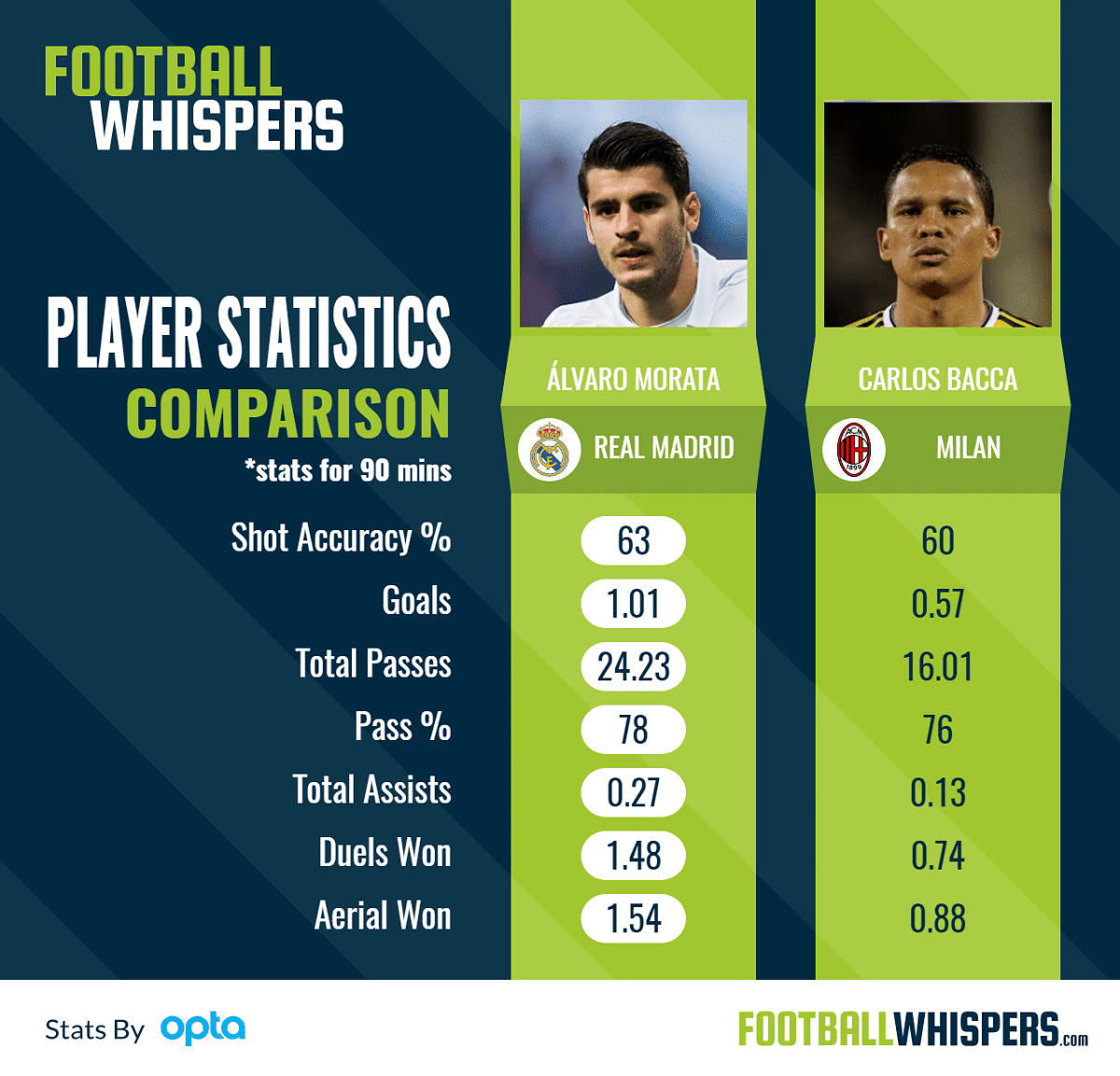 And, even against deeper defensive opposition in periods when his side had the large majority of ball possession, the Colombian was at times stifled.

Bacca is at his best when there is an abundance of pace and skill behind him. This allows him to thrive on the shoulder of the last man, making runs behind distracted and otherwise engaged defensive lines, from where he can utilise his clinical finishing. But these circumstances haven’t been present at the San Siro of late.

Morata’s profile is much better suited to performing the aforementioned tasks. Physically, he is relatively more imposing, standing several inches taller in height. The Real Madrid striker is also faster, which makes him more of a threat even when on his own.

During his one previous season in Italian football, with Juventus, the Spaniard showcased his purposeful running and directness. At his confident best, he was a whirlwind of movement, speed and aggressive attacking, a sort-of less violent and more selfless Diego Costa, often orbiting Carlos Tévez and hitting the channels.

Morata proved in that one campaign that he wasn’t necessarily a traditional No.9, in the sense that he relished not being the central focal point. But, having proven himself as a sound foil, or second striker, he evidenced his quality as an out-and-out finisher back in his home country last term.

He not only took more shots per 90 minutes than Bacca, but he achieved a higher shot accuracy percentage. Unsurprisingly, his goals rate was therefore higher.

Outside of his finishing, Morata made far more passes than the Milan hitman, and also did so with greater accuracy. Comparatively, he also created more chances for his team-mates, beat his opposing man more frequently, and won more aerial duels.

An established member of Zidane’s ‘B team’, Morata has often been rotated into the Real Madrid line-up as a means to keep the likes of Ronaldo and Benzema fit and functional. However, his 20 goals in 38 appearances last season were suggestive of someone who deserves more.

André Silva has been added from Porto in a £32.3million deal, but the 21-year-old is still relatively inexperienced. With just one year of top level football under his belt, he should not be expected to lead Milan's line without support.

According to a previous Gazzetta dello Sport report, Morata already agreed to a €7.5million per year deal with Rossoneri. If this is the case, the 24-year-old could soon receive the star status he perhaps needs at this stage in his career.

From a tactical perspective, he would provide the cut and thrust that has been so badly lacking for Milan in recent years. And, in a symbolic sense, he would fit right in with the beginning of an exciting new era, under new owners, in which the club challenges for major honours once again.