On Thursday afternoon, BetVictor announced that they would not be taking bets on a potential Adama Traoré move to West Ham United. This came as confirmation of the seriousness of the rumour’ the Middlesbrough winger may soon be on his way to the London Stadium.

The reaction to this speculation was mixed. On social media, some fans stated their frustration at the player’s supposed lack of end product. Others were excited by the prospect’s raw pace and skill. Yet, of course depending on the fee paid to sign him, he could be a good addition to the Hammers’ squad.

Speaking earlier this year, West Ham director of player recruitment Tony Henry suggested that quality and not quantity was the club’s priority in this summer’s window. “We need two or three [signings], maximum,” he told the club website. “If we can get the ones that we want, I think we’ll be a really good team next year.”

On the back of intensifying recent rumours, Traoré may well be one of those two or three signings.

Traoré has been a Premier League player for two years, though that period has been one of ups and downs. The Spaniard, who came through Barcelona’s youth academy, arrived at Aston Villa to great expectations in 2015 for a reported £7million fee.

Tim Sherwood, who was in charge of the Midlands club at the time, did not hold back in praising the youngster upon his signature, saying:

“[He’s] a bit of (Lionel) Messi and (Cristiano) Ronaldo. He’s very dynamic. He stays wide, likes to pick it up and run at defenders. He doesn’t give them a minute’s peace.”

But in 2015/16, Traoré made just 10 appearances for Aston Villa, all of which came from the substitutes’ bench, as the club suffered relegation to the Championship.

Following a disastrous debut season in English football, the 21-year-old was offered a career lifeline by Middlesbrough. There, he learned and developed under the auspices of Aitor Karanka, thrilling with his speed and dribbling ability.

The Spanish manager was happy with the youngster’s progress, stating: “Yes he is improving and learning. He has a lot of good things in front of him, he has a big future. Last season he didn't play, this is the first season where he's competing at this level.”

Traoré repaid his boss’ compliments with 27 league appearances in which displayed both his confidence and ability on the ball, tearing at opposition defences with abandon at every opportunity. In a primarily defensive side, he was the most enticing offensive threat.

Traoré also added to his all-round game last term, picking up snippets of tactical instruction from Karanka. He confirmed as much in an interview with the Guardian in December, stating:

“If the team’s playing on the counterattack, I have to go back and defend. Aitor takes me to one side a lot and tells me the things he wants to work on. I don’t want to become a totally different player, but I know there are things I have to improve.

“People tell me I’m the first in dribbling. But it’s important that, after dribbling, I cross or pass or score. If I don’t, then dribbling is pointless.

“I sometimes make the wrong decisions but it’s because I haven’t started many Premier League games. I need to work hard on my technique but I think I’ve shown what I can do in my last performances.”

This focus on improvement in other areas is something that may convince the more sceptical among West Ham fans. And the statistics suggest that, if Traoré does indeed sign for their club, he will bring a level of attacking specialism not seen in their existing options.

The 21-year-old completed 7.9 take-ons per 90 minutes, which was significantly more than any of Sofiane Feghouli, Manuel Lanzini, Robert Snodgrass, André Ayew and Michail Antonio achieved.

Traoré also completed a much higher percentage of his take-ons – 76 per cent – than any of the aforementioned, with the nearest competitor being Lanzini, who completed 69 per cent of his.

The above statistics are a testament to the Middlesbrough player’s athleticism and desire to run at opponents, traits that would no doubt fit in within Slaven Bilić’s 4-2-3-1 system. And, as evidence of how much he was targeted by opponents, he was fouled more often – 2.44 times per 90 minutes, to be exact – than any of West Ham’s current attacking midfielders or wingers.

Any notion that Traoré isn’t a willing operator without the ball are blown out of the water by his defensive statistics, too. Not only did he average more tackles won per 90 than Feghouli, Lanzini, Snodgrass, Ayew or Antonio, but he also completed a comparatively higher percentage – 55 per cent – of his attempted tackles.

It’s worth placing a caveat here: that Middlesbrough were a far less attack-minded side than West Ham last season. This was shown by the fact they were the Premier League’s lowest-scoring team. However, the fact the young winger fitted in and contributed well suggests that Karanka’s defensive tuition paid off. 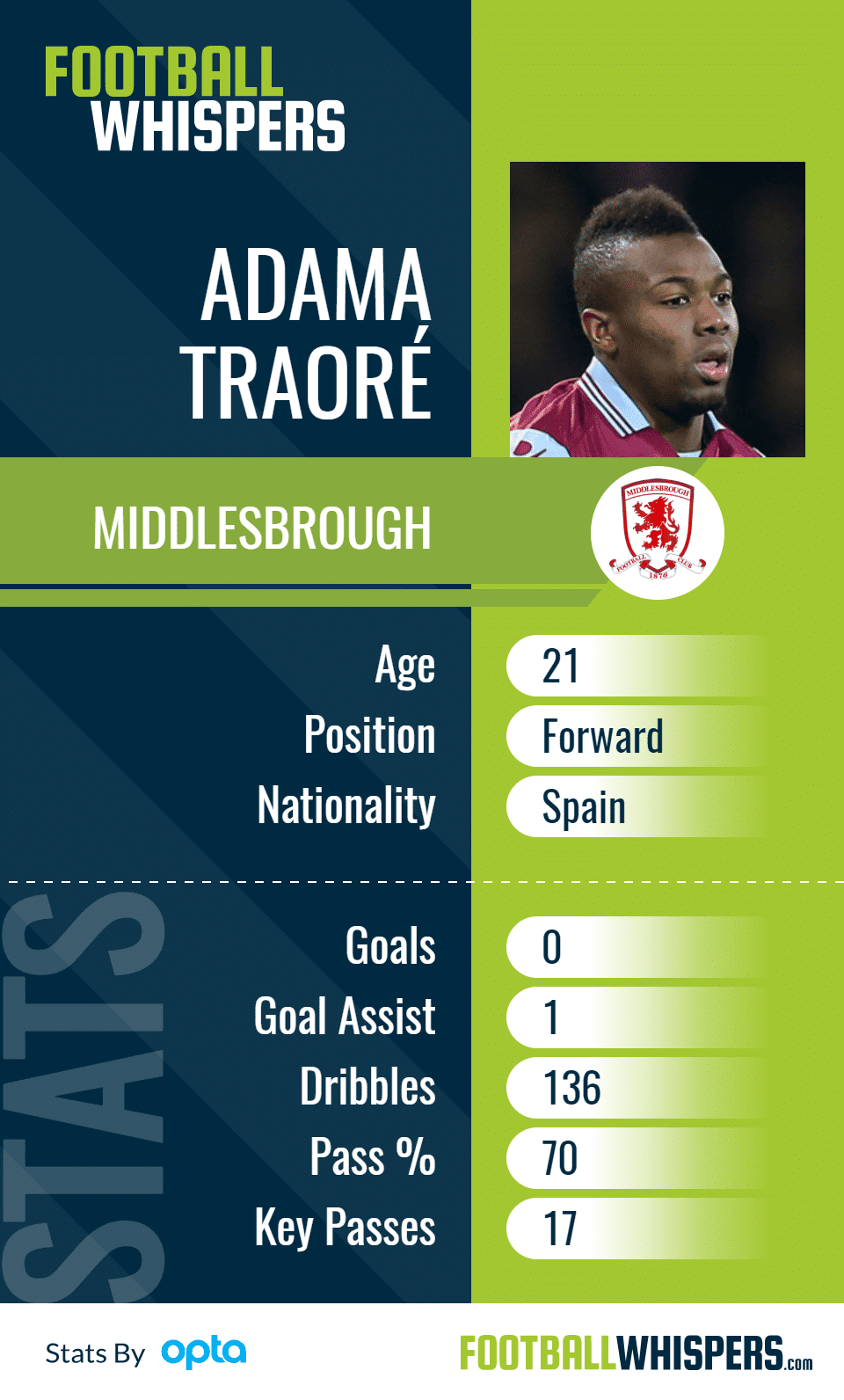 Last season he completed fewer passes and made fewer assists on average than any of the Hammers’ existing attacking midfield personnel. He also completed a comparatively lower percentage of those passes he did attempt, while only Ayew made fewer key passes per 90 minutes.

And in the final third, Traoré showed a lack of killer instinct. While his relatively lower shots-per-90 output can be explained by Middlesbrough’s collective lack of conviction or attacking intent, his 25 per cent shot accuracy suggests he has to work on his finishing. For context, Lanzini had the lowest percentage shot accuracy of the aforementioned West Ham quintet with 39 per cent.

The Spanish wing wizard has also yet to score one single goal in his first two years of Premier League football, whereas every one of the Hammers’ attacking midfield or wide options averaged a minimum of 0.25 per 90 minutes.

Evidently, Traoré remains a raw talent. But, if utilised correctly, his end product need not be an issue for West Ham. Rather, his dribbling specialism could be used on counter-attacks, or to drag opposition defences out of their structure, creating space for team-mates.