There was a bit of surprise when Huddersfield Town signed Scott Malone in the summer.

They already had one of the best left backs in the Championship around in Chris Löwe, who’d more than proved himself since his arrival from Kaiserslautern the previous summer.

Perhaps a left-back with more Premier League experience would have been expected, but David Wagner plumped for Malone, who came in off the back of a hugely impressive season with Fulham.

While everyone may have been talking about Ryan Sessegnon at Craven Cottage, it was in fact Malone who was first choice left-back for Slaviša Jokanović’s side and many Whites fans believe their failure to properly replace him this year has contributed to their poor start to 2017/18.

And while Löwe impressed at the John Smith’s Stadium in 2016/17, Malone was named in both the EFL and PFA’s Championship Teams of the Year, while he also scored against Huddersfield in Fulham’s 4-1 win against the Terriers, which will definitely have caught Wagner’s eye.

When he signed, the German said: “I’m excited to welcome Scott to Huddersfield Town.

“Our fans will have seen in our games against Fulham last season what a good player he is and I know his abilities will suit our style of play very well.

“Scott is a good physical presence and is a very capable defender, plus he adds a lot going forward.

“He shows good football intelligence to time his forward runs and can setup goals for team-mates and scoring them himself.

“We already have a very good left back in Chris Löwe and a real young talent in Tareiq Holmes-Dennis, but as we enter our first Premier League season it is so important to have competition and the ability to rotate our side, as we did so successfully last season.”

But despite his peers rating Malone as better than Löwe last season, it’s been the German who has tended to start at left-back.

Löwe has been Wagner’s preferred option for nine games, while Malone has been in the starting XI just once in the Premier League.

The former Fulham left-back has also started two EFL Cup games, a competition Löwe is yet to play in.

His lack of game time had led to Malone reportedly being a Leeds United transfer target, something Wagner has since rubbished.

Malone started Town’s last game as they beat West Bromwich Albion, as both he and Florent Hadergjonaj came in for Löwe and Tommy Smith at full-backs.

Wagner explained that decision after the game, saying: “We wanted to bring fresh legs, speed and offensive power into the side and on the wings.

“Both Flo and Scotty have trained very well and have always been very close to the starting XI.”

So could Malone take over from Löwe permanently as the first-choice left-back? We’ve taken a look at some of their statistics. 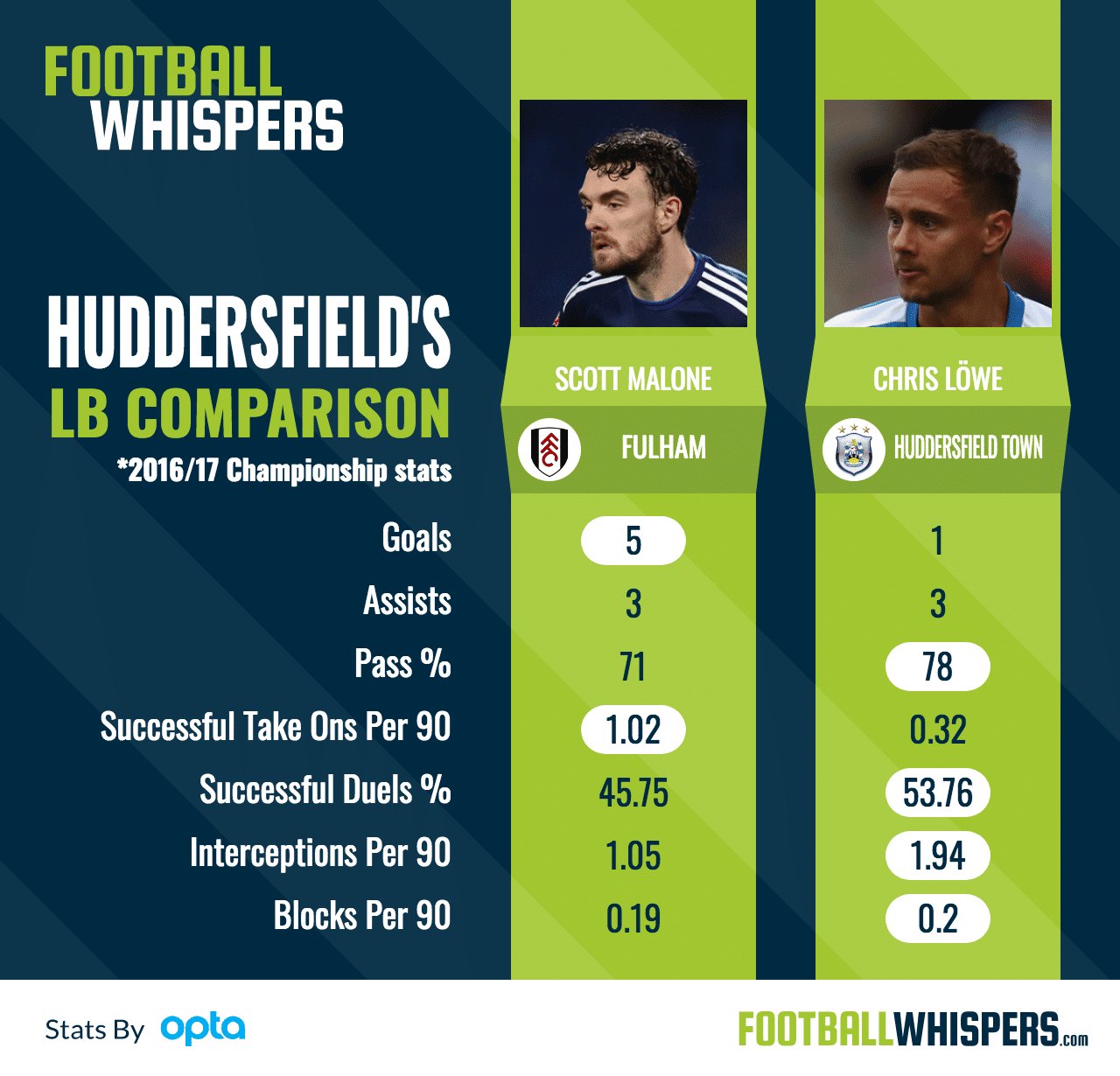 Despite Malone taking the plaudits while at Fulham, it was his German competitor at Huddersfield who looked more impressive largely.

Malone may have scored more goals – five to just one – and made more assists per 90 minutes – 0.1 to 0.07 – but it was the German who excelled in his first season in England.

Malone did make a considerable higher amount of successful take-ons per 90 though – 1.02 to 0.32 – underlining Wagner’s point of how much he could add to Huddersfield going forward.

And although he’s had limited time in the league this season, he’s definitely impressed – and he has clearly spent time on the training pitch adding to his defensive side of the game too. 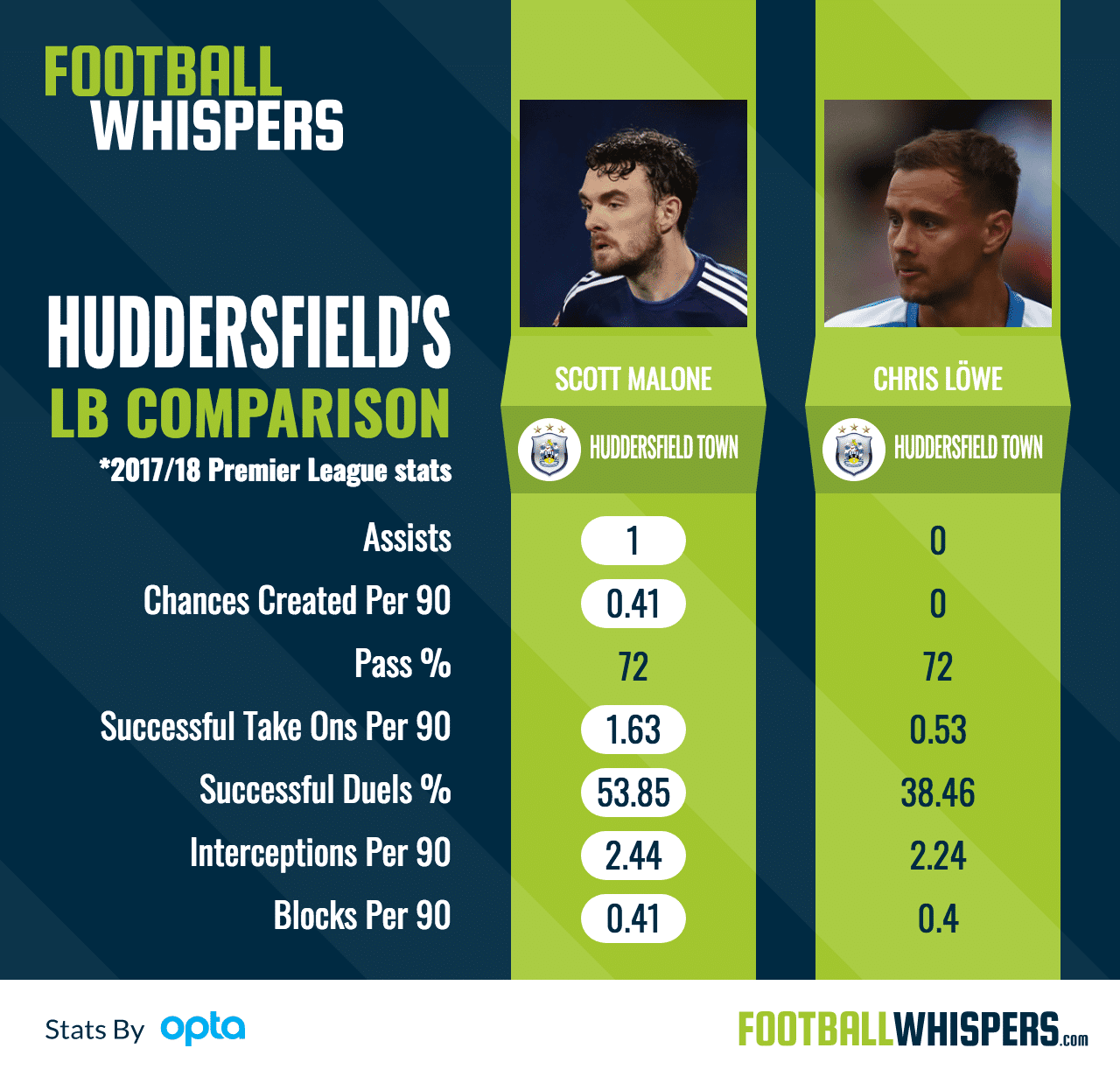 Malone has provided a league assist this season, something Löwe is yet to do, and has also been involved in creating chances this season – 0.41 per 90 – while his fellow left-back hasn’t.

And with Huddersfield’s increased defensive pressure after stepping up a league, Malone has proved he can rise to the challenge, making more interceptions and blocks per 90 than the German too.

The former Fulham full-back has only played five Premier League games in total, with just two starts, but after impressing against West Brom, he deserves to stay in the starting lineup and if he carries on the form he’s shown in his limited game time, it could very well be Löwe who finds himself as a regular on the bench rather than Malone.