In an afternoon which saw their 25-game unbeaten run come to a crashing halt, there were few positives Manchester United fans could take from their side's 2-0 defeat to Arsenal at the Emirates.

However, there was one shining ray of hope to be found within the Red Devil's drab defeat: the performance of 19-year-old Axel Tuanzebe.

The teenage defender was making his Premier League debut against Arsène Wenger's team and, despite being played in an unfamiliar position and having to mark none other than star forward Alexis Sánchez, the youngster was excellent. 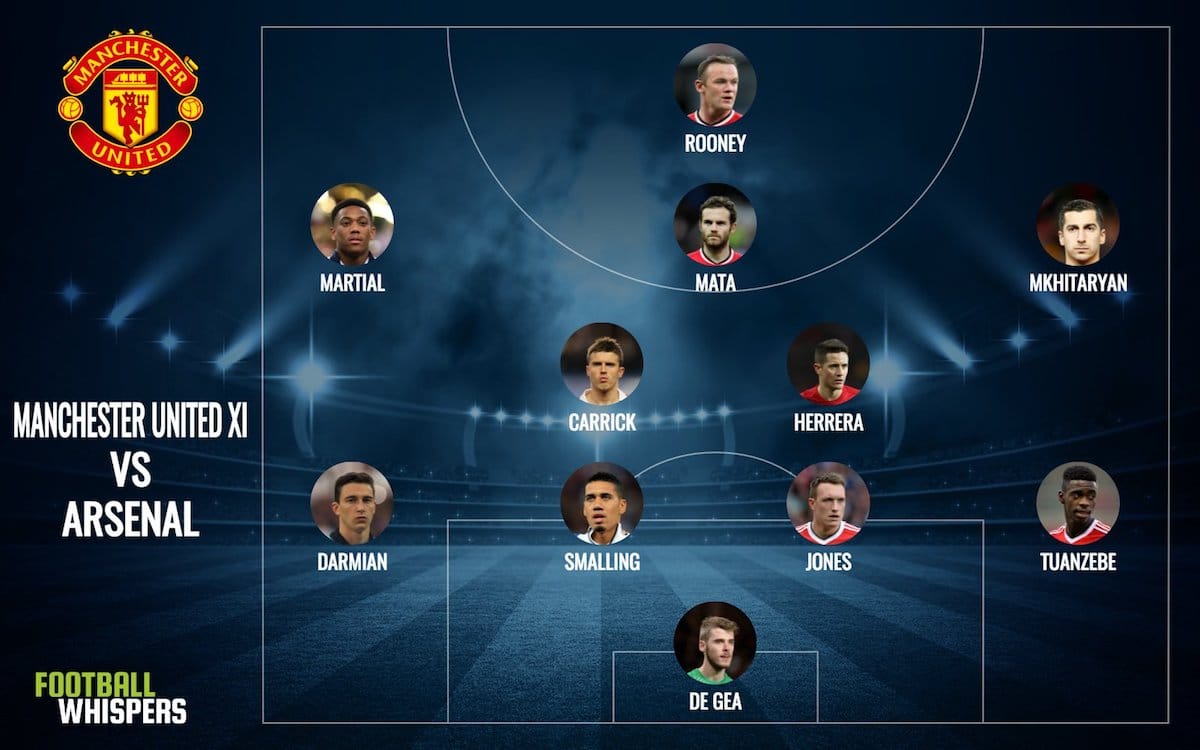 read more: pogba – finally getting the credit he deserves

A centre-back by trade who also has experience playing in a defensive midfield role within the United youth teams, Tuanzebe was asked to play at right-back against the Gunners.

It was big ask for the DR Congo-born England youth international, especially as his only senior appearance to date was a 22-minute cameo in a routine FA Cup win over Wigan Athletic in January.

But it wasn't a traditional role on the right side of the Red Devils back four that the teenager was asked to perform in. Rather Tuanzebe was tasked with man-marking Sánchez who was playing as an inside forward in Arsenal's 3-4-3 formation.

Were the Chilean superstar operating in his more regular role on the left wing in a 4-2-3-1, the former Barcelona and Udinese attacker's starting position would have been much closer to the touchline.

However, as is the case with Eden Hazard at Chelsea this term, the left slot in the attacking three in 3-4-3 means that Sánchez is tasked with playing much closer to the centre-forward, with the wing-back responsible for providing width on his outside.

With that in mind, Tuanzebe was instructed to stay narrow and deny Sánchez and kind of freedom inside the half-space — the zone between centre-back and full-back — which the Gunners' top scorer would ordinarily look to exploit when playing as an inside forward. 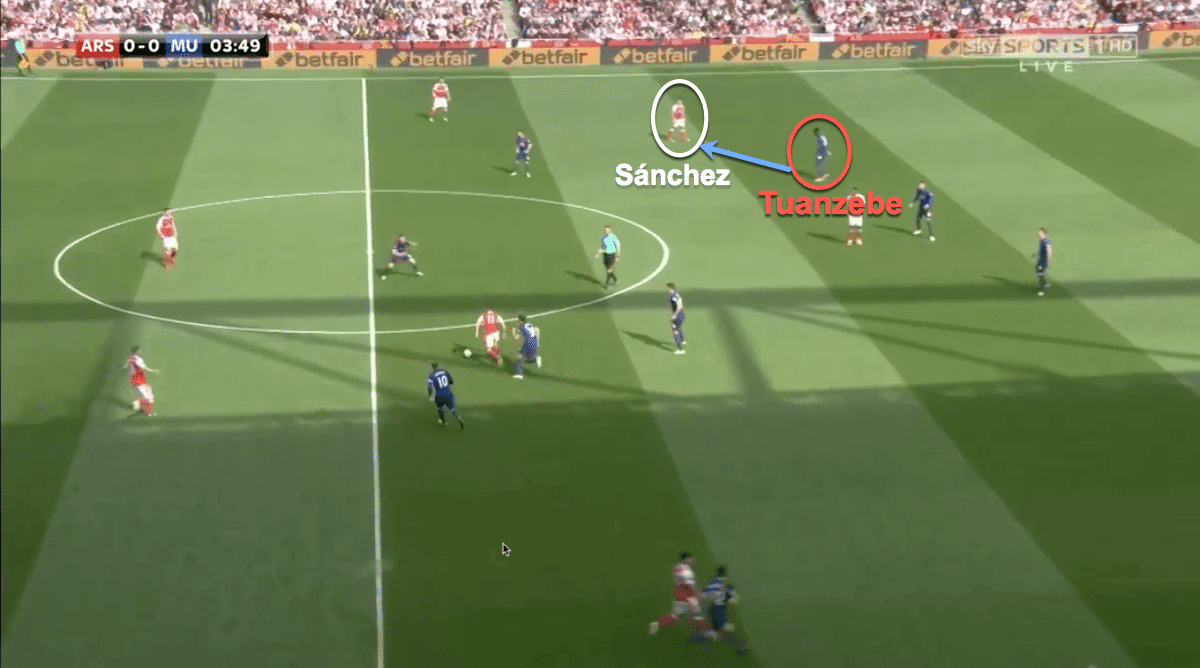 In the above image, with Arsenal in possession in central midfield, we see Tuanzebe's focus trained on Sánchez, ready to close the 28-year-old No.7 down if he makes himself available for a pass. 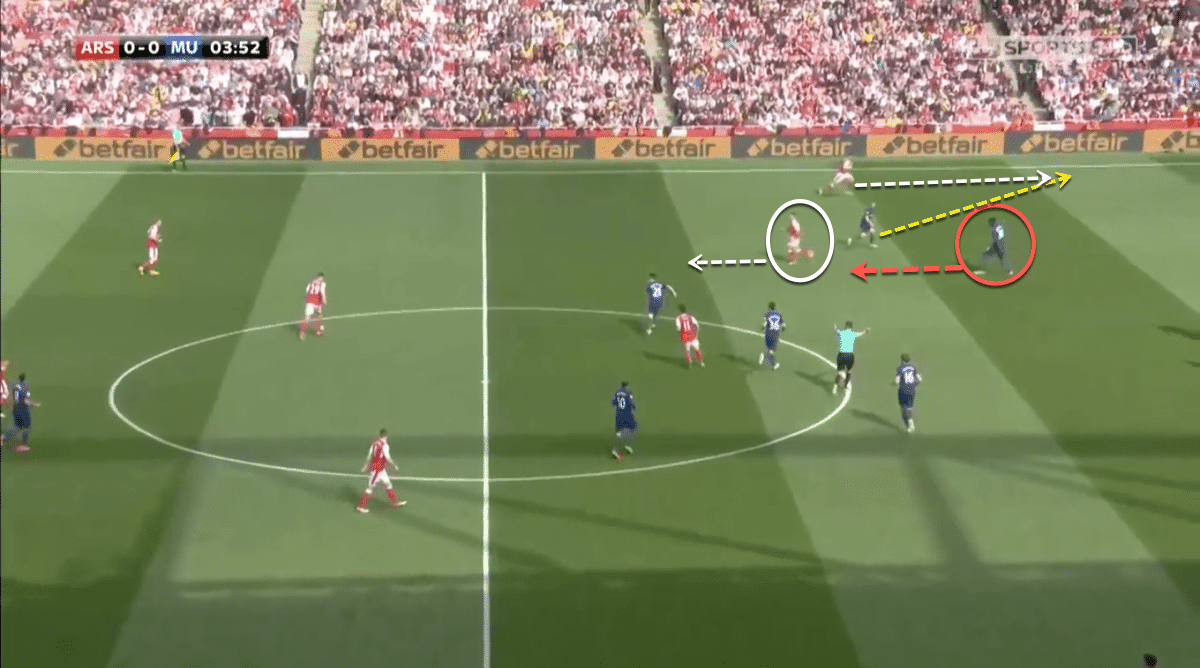 In this picture we are able to see the depth with which Tuanzebe comprehends his role and the confidence he has in his tactical understanding. As Sánchez drops deep to find space, the 19-year-old instructs Juan Mata to track the run of Kieran Gibbs so that the debutant can follow Sánchez without leaving space in behind for the wing-back to exploit.

On occasions when Sánchez looked to drop off the forward line but Arsenal still had players in attacking positions beyond him, Tuanzebe knew that he could not allow himself to be dragged out of position. 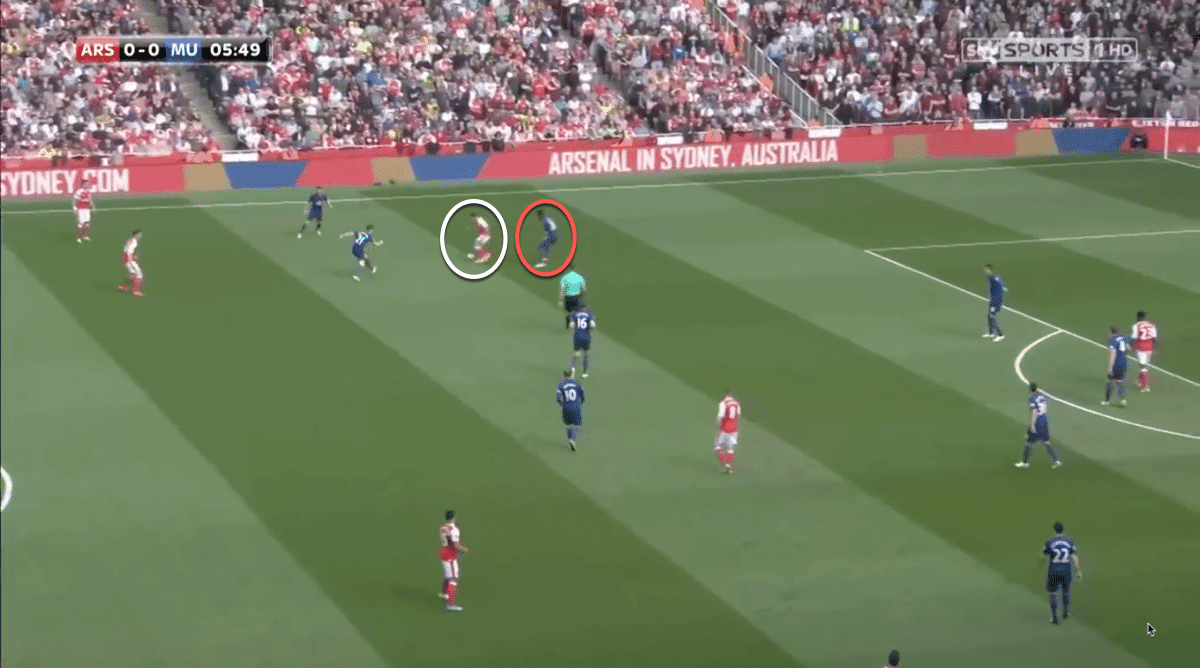 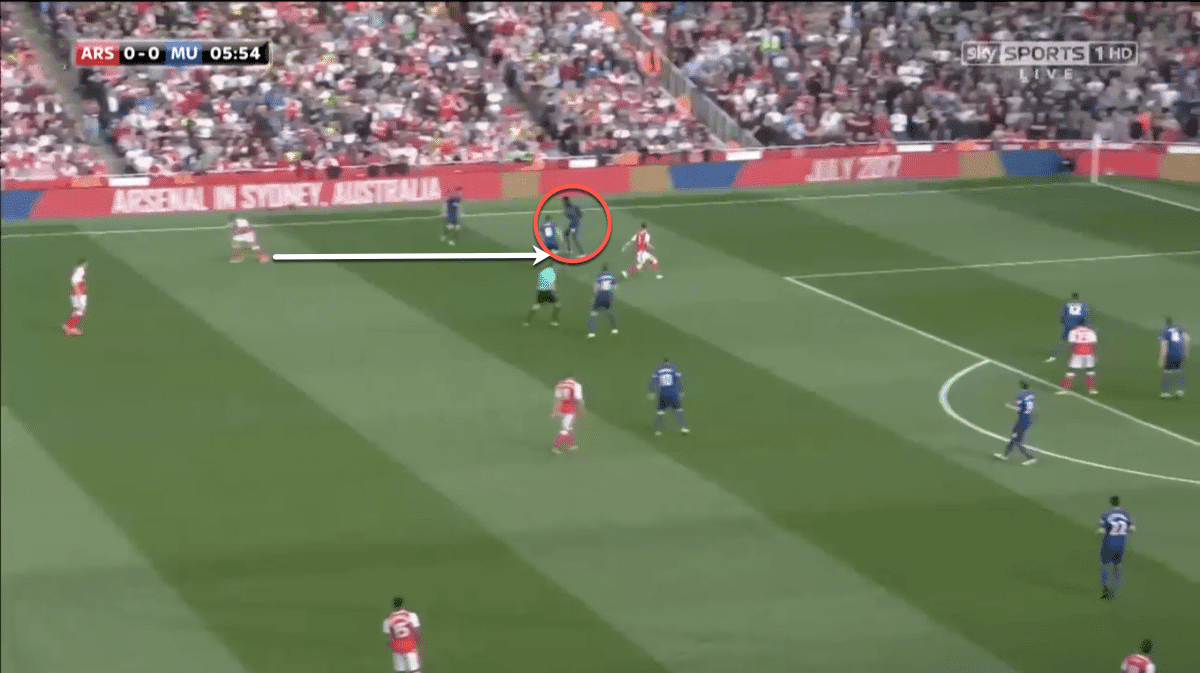 Here we see Tuanzebe get tight to Sánchez when the Arsenal man receives the ball. The defender knows that he cannot follow his subject this time as he moves away from goal because Aaron Ramsey has broken forward from midfield without being tracked.

Instead, Tuanzebe holds his position and intercepts when Sánchez tries to pick out Ramsey. 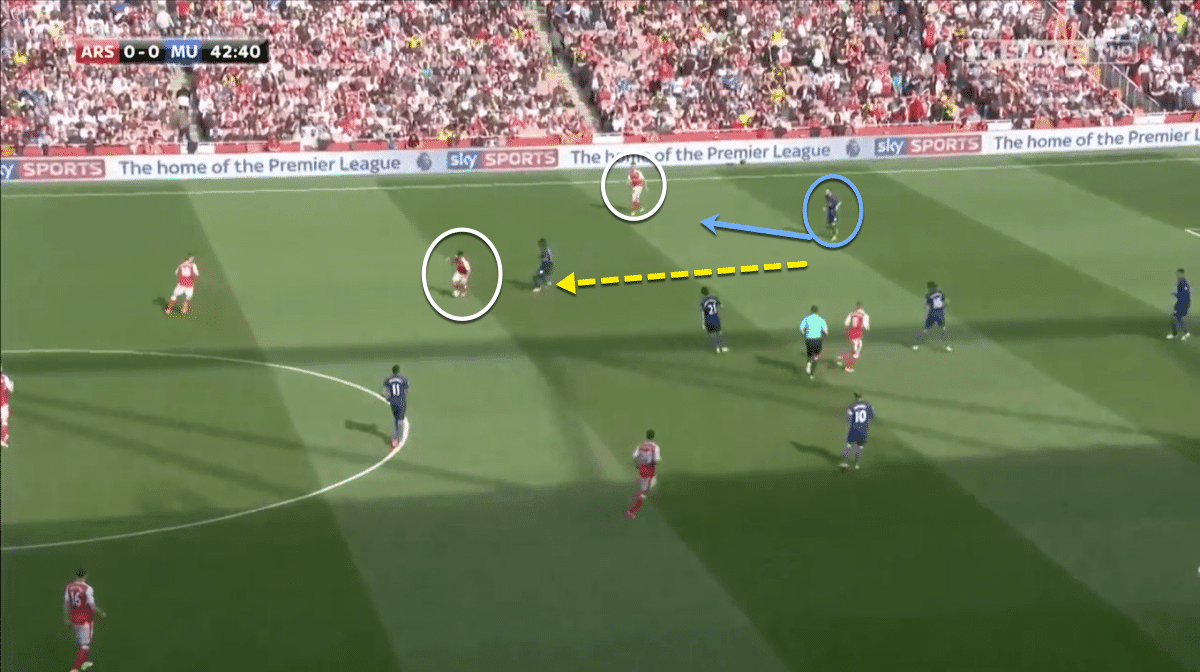 This time, with Mata, circled blue, in position to cover any forward run Gibbs might make, Tuanzebe knows that he can follow Sánchez into midfield.

From there, his sole intention is to stop Sánchez from making any penetration into the half-space. Tuanzebe does not necessarily have to make a tackle or an interception to dispossess the Arsenal star, he simple needs to stay tight and block his forward progress. 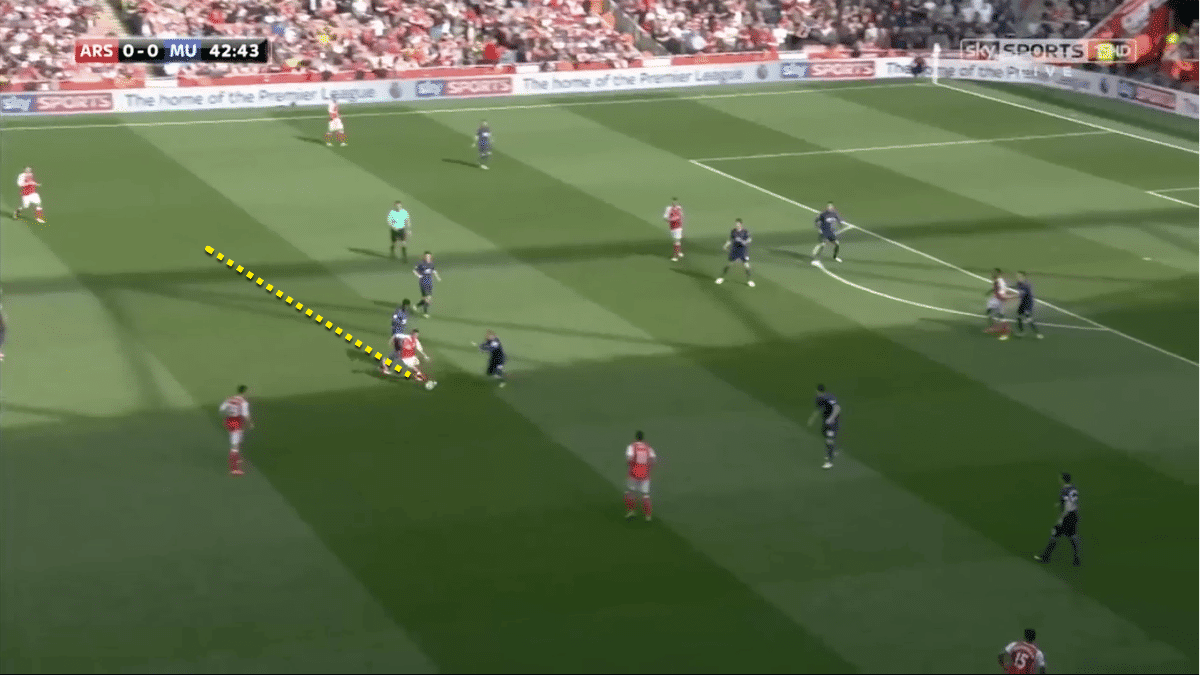 As we see above, he did so perfectly, funnelling Sánchez out wide, forcing the Chilean to play a square pass to Alex Oxlade-Chamberlain. With his task completed, Tuanzebe then immediately got back into position on the right side of United's defence.

Tuanzebe's performance the only positive for #MUFC today

Mature and assured in his defensive duties, Tuanzebe was also confident and technically proficient in possession, completing 81 per cent of his passes and consistently making sound choices with his use of the ball.

Despite making his debut in a game of such magnitude, the 19-year-old never appeared hurried and exuded calm with the ball at his feet. There were no wild hacks into touch and aimless hoofs forward were avoided where possible.

Instead, Tuanzebe's first thought was always “can I safely play a forward pass?” If the answer was no then he would look to look to find a team-mate in space either square of him or back towards his own goal, prizing retention of the ball. 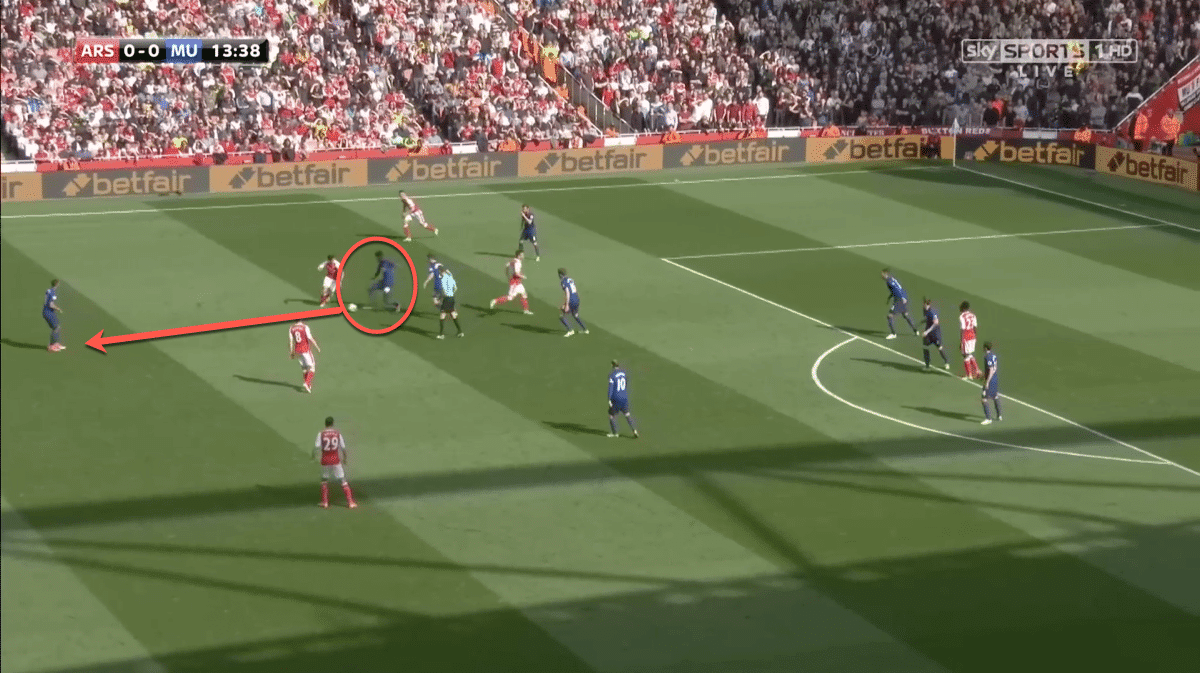 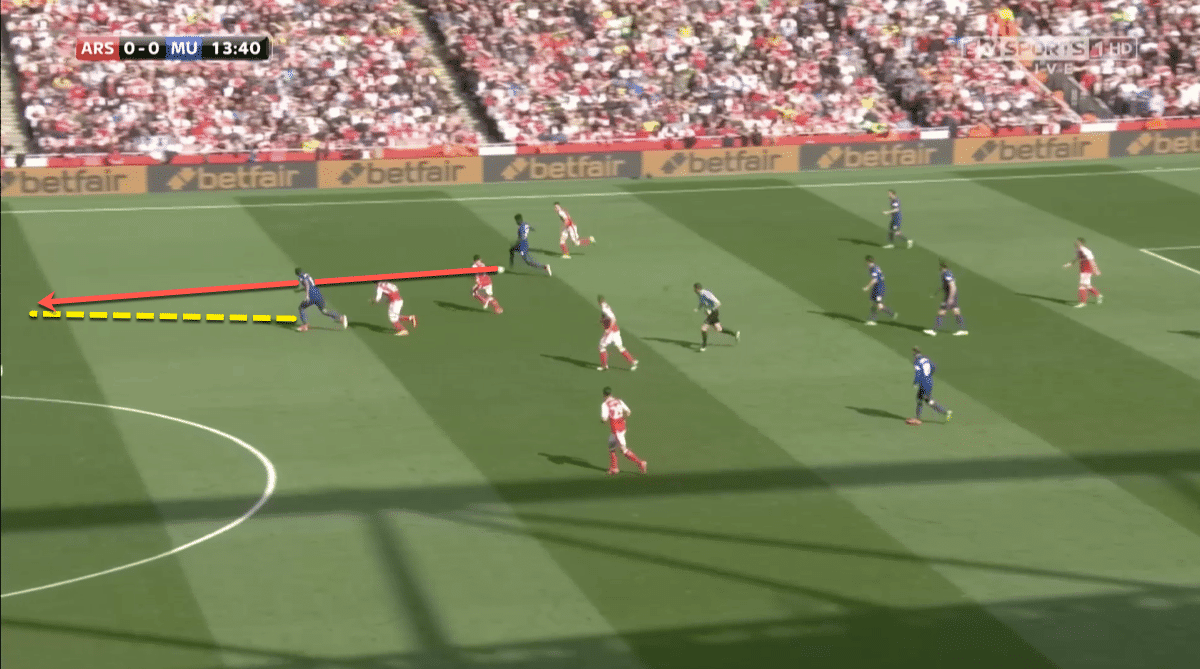 In the above sequence we see Tuanzebe exercise superb anticipation to intercept a layoff from Sánchez directed towards Ramsey. The youngster then instantly looks to get his side on the front foot, confidently playing a one-two with Anthony Martial which ends with United winning a free-kick on the halfway line.

In a matter of seconds Tuanzebe had relived the pressure his team were under and turned defence into attack. This kind of quick thinking in transition is becoming more and more important in the modern game and shows that Tuanzebe's mental gifts match his physical attributes. 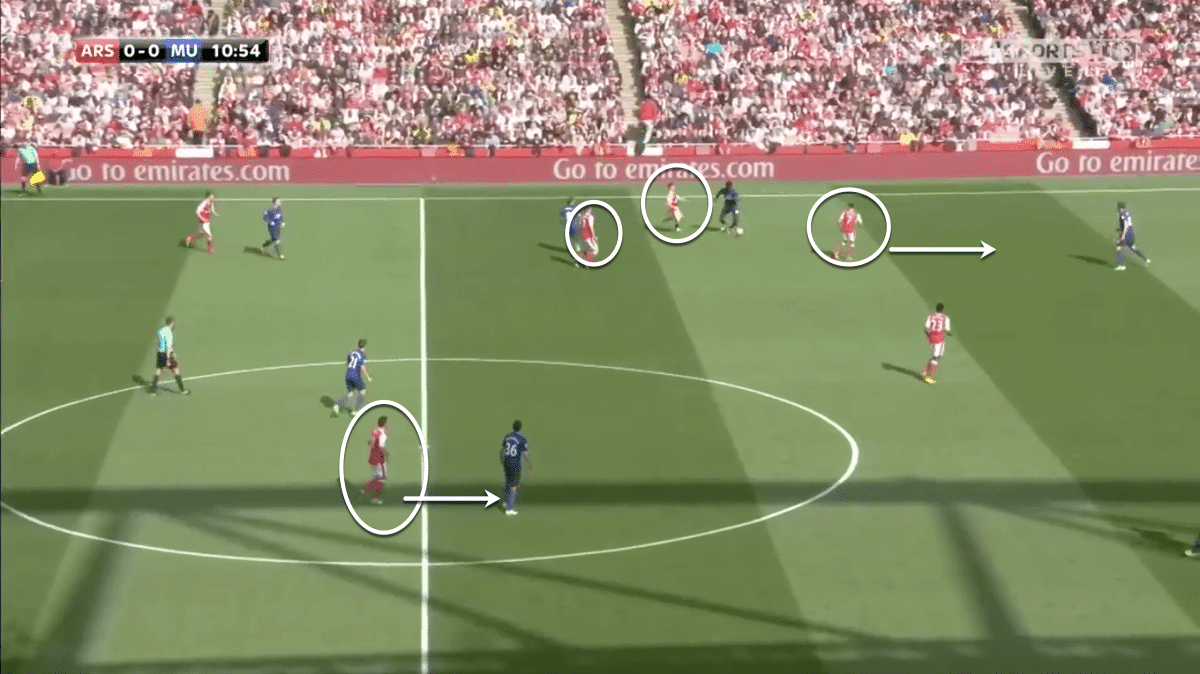 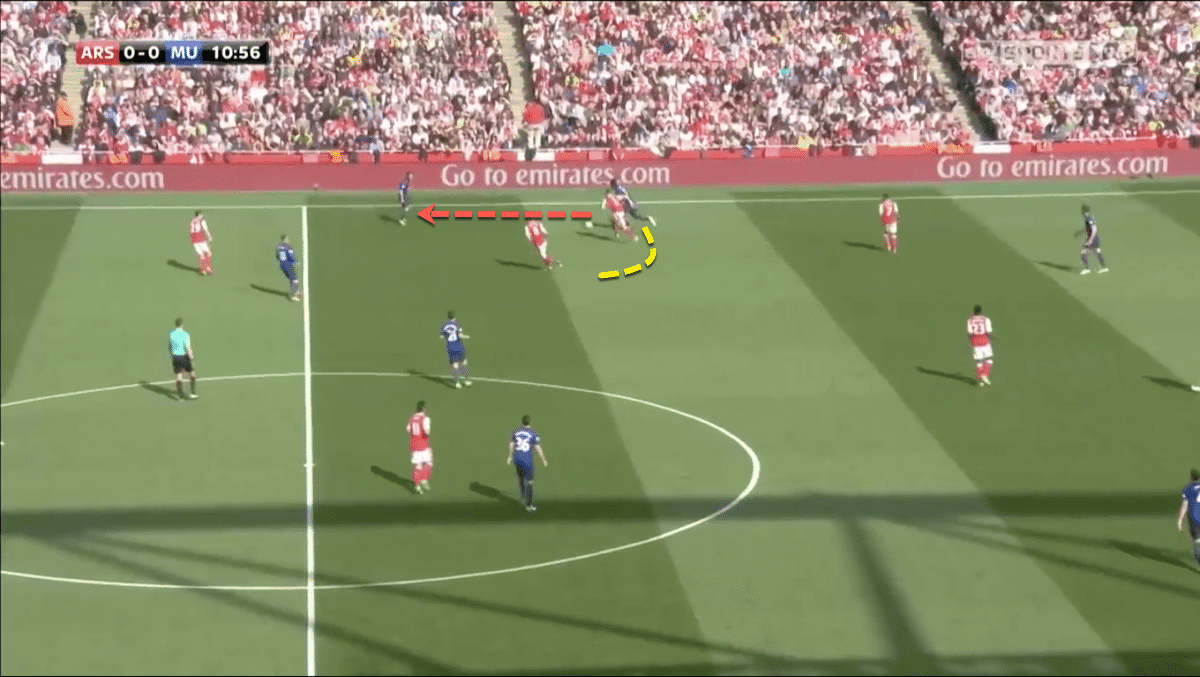 Here we see Tuanzebe being pressed in possession while the surrounding Arsenal players, circled in white, have cut off all of his passing lanes. Rather than panic and lose the ball, he stays calm and backs himself to play his way out of trouble.

He then expertly turns away from Gibbs, opening up a simple ball to Juan Mata, keeping United not only in possession, but moving forward too.

It wasn't a faultless display from Tuanzebe, as he was occasionally beaten one-on-one and his pass accuracy tailed off in the second period — he completed 92.3 per cent of his passes in the first half and 62.5 per cent in the second — perhaps as fatigue set in.

It could also be argued that by being asked to undertake such a prescribed role in man-marking Sánchez and defending the half-space, though a tough task in itself, Mourinho's rigid instructions helped Tuanzebe to an extent, minimising the need for improvisation and allowing him to focus on a few key tasks.

But nothing can be taken away from the young defender who, despite his more experienced team-mates grossly underperforming and the manager generally getting his tactics and selection wrong, stood out.

Finishing with three interceptions, three clearances, five tackles and an 81 per cent pass accuracy, Tuanzebe showed that he deserves to be involved in the United first team on a more regular basis.