Chelsea may have been deserving Premier League champions in the end, but no side ran Antonio Conte's Blues closer that Tottenham Hotspur.

Mauricio Pochettino's team improved upon a third-place finish in 2015/16 to secure the runners-up spot last season. Along the way, their exciting brand of football, tactical versatility and youthful swagger made them the darlings of neutrals and earned the begrudging respect of rivals.

With some sensible additions overt summer, there's no reason to believe that Spurs can't go one better next season and land a first top-flight title since 1961.

The likes of Dele Alli, Harry Kane and Christian Eriksen were lavished with praise for their performances last season and rightly so. But to achieve a sustained title push and secure Champions League qualification requires the support of a deep and talented squad.

Here, we have taken a look at Tottenham‘s supporting cast from 2016/17 to see which of the players with 15 Premier League starts to their name or fewer (excluding youngsters Filip Lesniak and Josh Onomah, whose combined appearances totalled only 22 minutes) were most effective when called upon by Pochettino.

Of course, Kane finished the season with a phenomenal return of 29 goals from 30 appearances to clinch a second successive Golden Boot award, netting an extraordinary eight goals in the final three matches of the season to leapfrog Everton striker and Chelsea transfer target Romelu Lukaku at the top of the scorers' chart.

Dele and Son Heung-Min also produced their most prolific Premier League campaigns with 18 and 14 goals respectively.

But of all the players to have started 15 times or fewer in the league, perhaps rather surprisingly, the misfiring Vincent Janssen's paltry two-goal haul ranks highest.

Brought in from AZ Alkmaar for £17million last summer, the 22-year-old Dutch international only registered his first league goal from open play in April, with his other strike coming from the penalty spot.

With a shot conversion rate of just 6.67 percent — for context, Kane dispatches 26.36 per cent of the shots he takes — the fact that no non-regular starter chipped in with more goals than Janssen is evidence of how Pochettino might need to revisit the transfer market for striking reinforcements this summer.

Érik Lamela proved to be the most creative Spurs player with fewer than 15 starts to his name last term, but the Argentinian winger, who made 2.7 key passes and completed 2.3 take-ons per 90 minutes, was last seen in October. Since then, a mysterious hip injury has sidelined the former Roma man, and he seems unlikely to ever feature for Tottenham again.

Aside from Lamela, full-back Kieran Tripper, who took over from Manchester City transfer target Kyle Walker late in the season and accumulated 12 total appearances for 566 minutes of Premier League action, proved to be Spurs' most efficient chance-creator of all the stand-ins. His return of 2.2 key passes per 90 minutes ranked behind only Eriksen and Lamela in the entire squad.

French winger Georges-Kévin N'Koudou didn-t start a single league fixture last term, but in his nine substitute appearances, which totalled just 49 minutes, he completed five dribbles — a rate of better than one every 10 minutes. What is perhaps even more stunning is that he also managed to attempt a total of 15 take-ons in that time.

No Spurs player, including all of the regular starters, could top Harry Winks' average of 68.6 passes per 90 minutes — Mousa Dembélé, with 64.4, was closest.

This shows that the 21-year-old midfielder, who is very highly regarded in and around the club, is a metronomic presence in the centre of the pitch, and willing to take responsibility for his team's passing moves despite his tender years and relative lack of experience.

Winks also completed an incredible 90.2 per cent of those passes — only Dembélé (92 per cent) picked out a white shirt more frequently.

Of the players with fewer than 15 starts, record signing Moussa Sissoko is next in line when it comes to pass accuracy, but his average of 81.9 per cent is still a long way short of Winks'.

As well as being a safe pair of hands in possession, Winks demonstrated that he is capable of being a creative force too, contributing 1.5 key passes per 90 – the same as Dele. Sadly, an ankle injury curtailed the young playmaker's season in April. 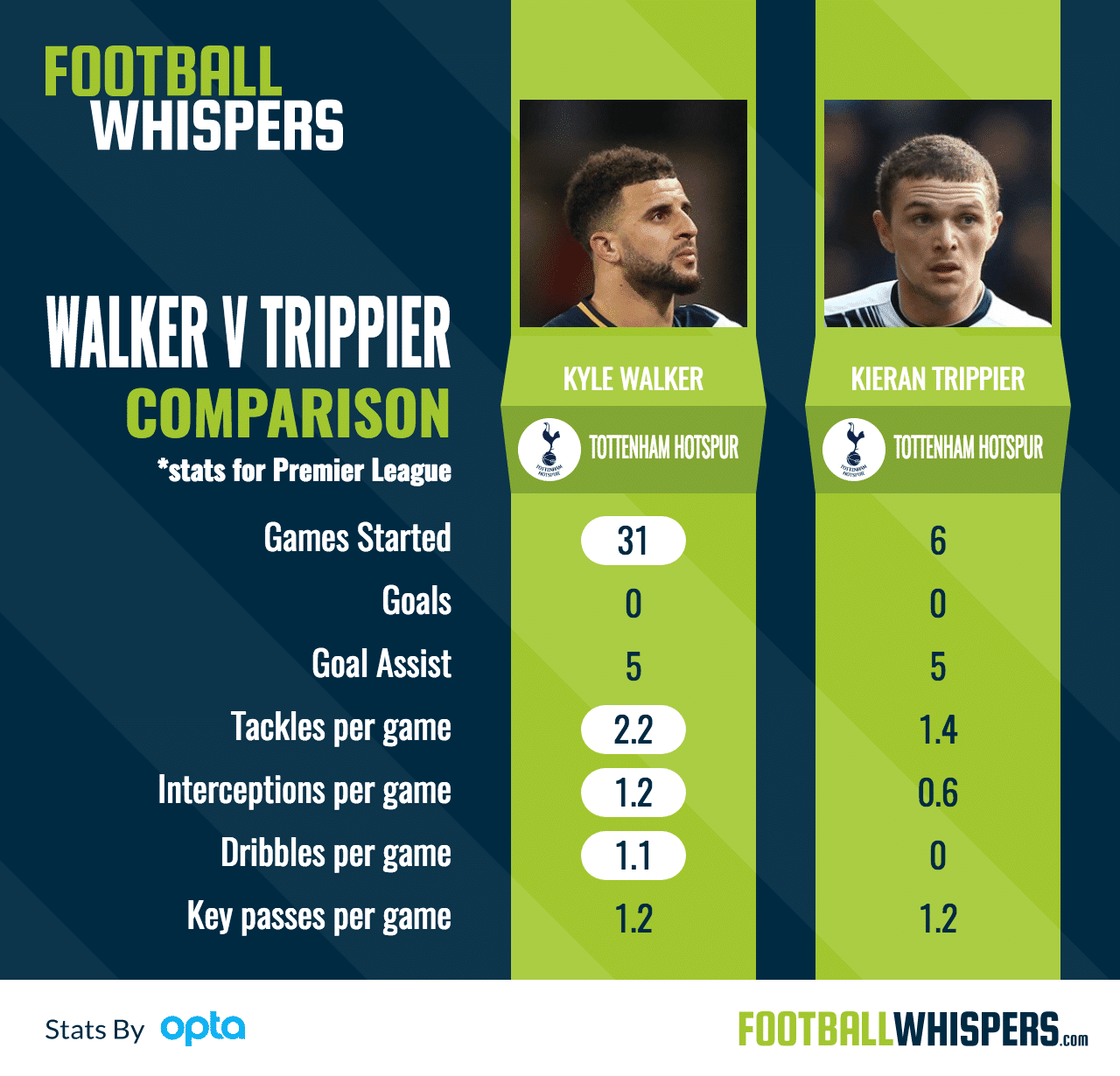 It's no surprise to see that Trippier comes out on top defensively with 2.7 tackles and 1.1 interceptions per 90 minutes. The former Burnley defender impressed so much in his limited game time last season that he is being tipped to take over from Walker as the club's first-choice option on the right side of defence if the England star leaves this summer.

Austian stopper Kevin Wimmer ranks highest when it comes to clearances. The former Köln centre-back cleared his lines an average of 3.3 times per 90 minutes. N'Koudou did actually manage to top that tally with 5.5, but the fact he only played 49 minutes skews the statistic somewhat.

Pochettino will want to strengthen this summer for fear of falling behind Tottenham's big-spending rivals. And, in fairness, a few sound additions to bolster his options would be wise.

But Spurs are fortunate to have a handful of trusty performers in reserve, waiting in the wings and stepping to the plate when required.