Tottenham Hotspur and Everton are reportedly set to go toe-to-toe in in the summer for Sampdoria’s Karol Linetty. So claim Tutto Mercato Web who believe the midfielder could be on the move once again just 12 months after signing for the Serie A outfit.

The two clubs are no strangers to rivalling one another for the signature of a player. Mauricio Pochettino won the battle for Moussa Sissoko, but after seeing how the Frenchman has performed so far this season, perhaps it was Ronald Koeman who won that particular war in hindsight.

Everton are in the market for players who can get them challenging for a top six finish, almost making it a magnificient seven, whereas Spurs are after individuals who can help cement their place as one of the big six. It’s no surprise the two clubs are set to be shopping in the same talent pool.

Who is Karol Linetty?

The 22 year old midfielder started his footballing career at Lech Poznań. He made his debut for the club during the 2012/13 season and went on to make over 100 appearances for the Polish side, even featuring in European competitions during various seasons. 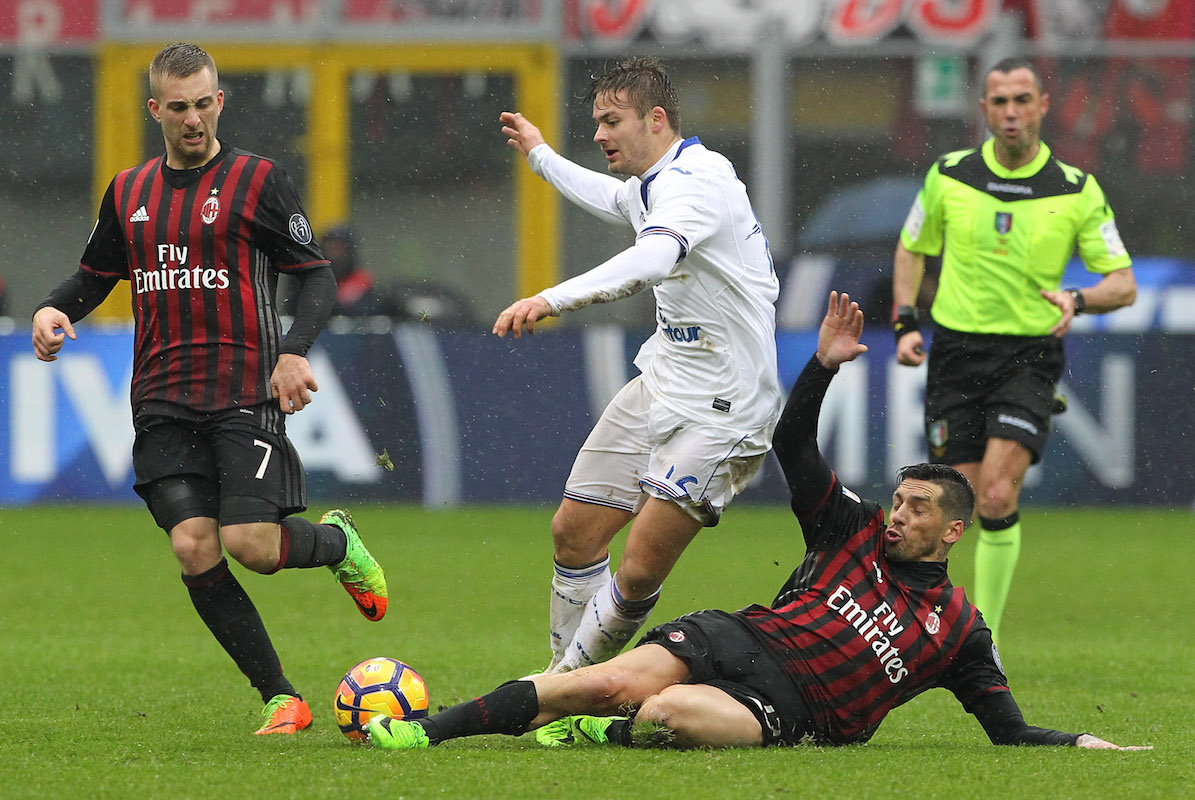 He was linked with moves to Manchester City and Leicester City, while White Hart Lane was a rumoured destination in 2014. However, a move to the Premier League never materialised and it was Italian side Sampdoria who finally plucked the player away from Poznań in a deal reportedly worth £2.7million. He signed a five-year contract with unconfirmed reports suggesting he’s paid €5,000-per-week.

What type of player is he?

The best way to describe Linetty would be as a good old fashioned box-to-box midfielder. In the modern game with so many players now becoming a specialist in a certain role, it’s rare to find someone able to do a variety of things, but that’s just what the Sampdoria man does.

He’s similar to what many would call a ‘recycler’, but there’s an added dimension to his game in the sense he’s not always looking to play the simple pass.

He’s a busy body and an all-action midfielder, in many ways similar to Manchester United midfielder Ander Herrera. He closes down the opposition, breaks up the play, regains possession and then picks out a pass to get his team onto the attack.

Both Koeman and Pochettino use systems which rely on their players carrying out not only individual instructions, but collective ones too. They have to be disciplined, switched on and intelligent. 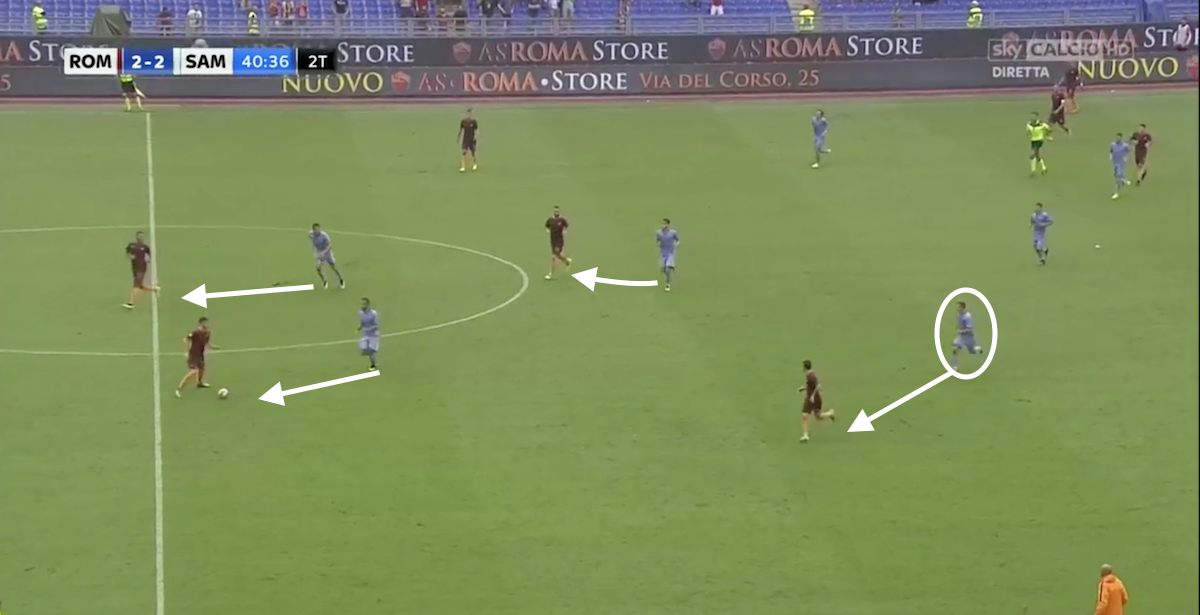 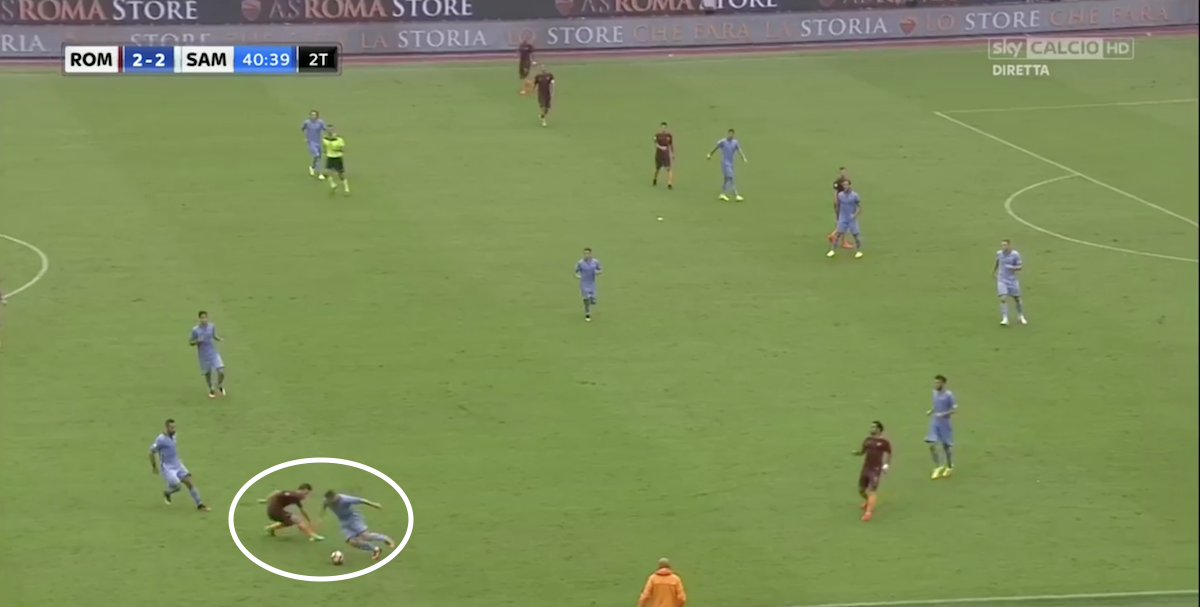 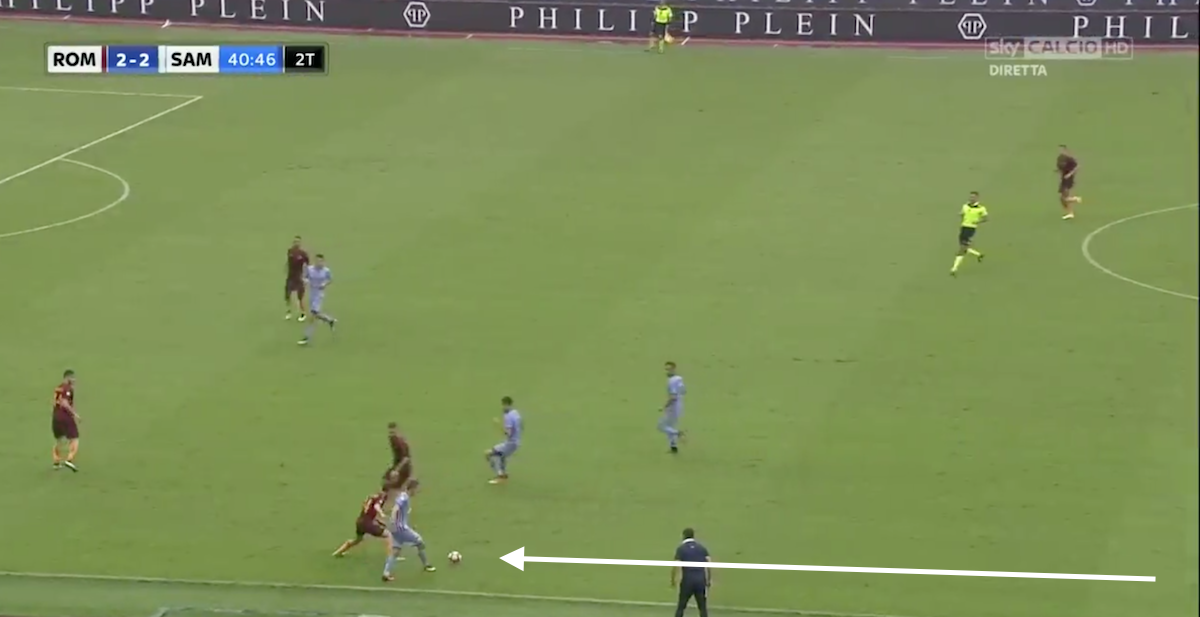 In the above series of pictures, Linetty, to an extent, showcases those traits. He holds his position initially in midfield as Roma look to build from the back, but as soon as the ball is played to a man in his area he looks to press him and repel the attack.

He dispossesses the Roma man and carries the ball down the line, engaging two of the home side’s players, before playing the ball inside and getting Sampdoria onto the attack. 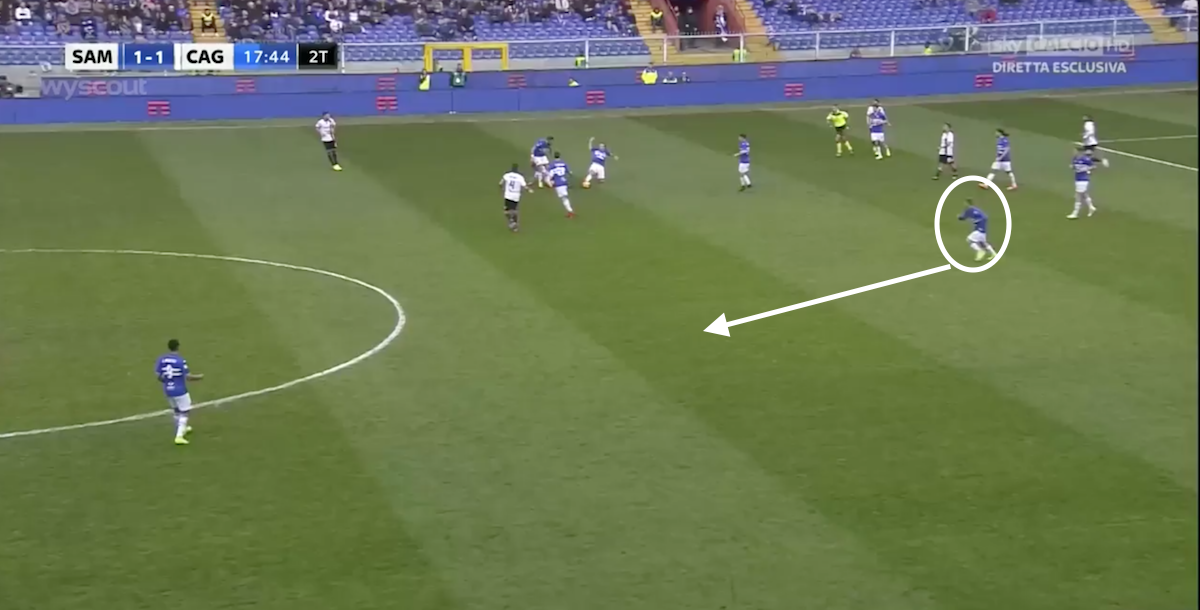 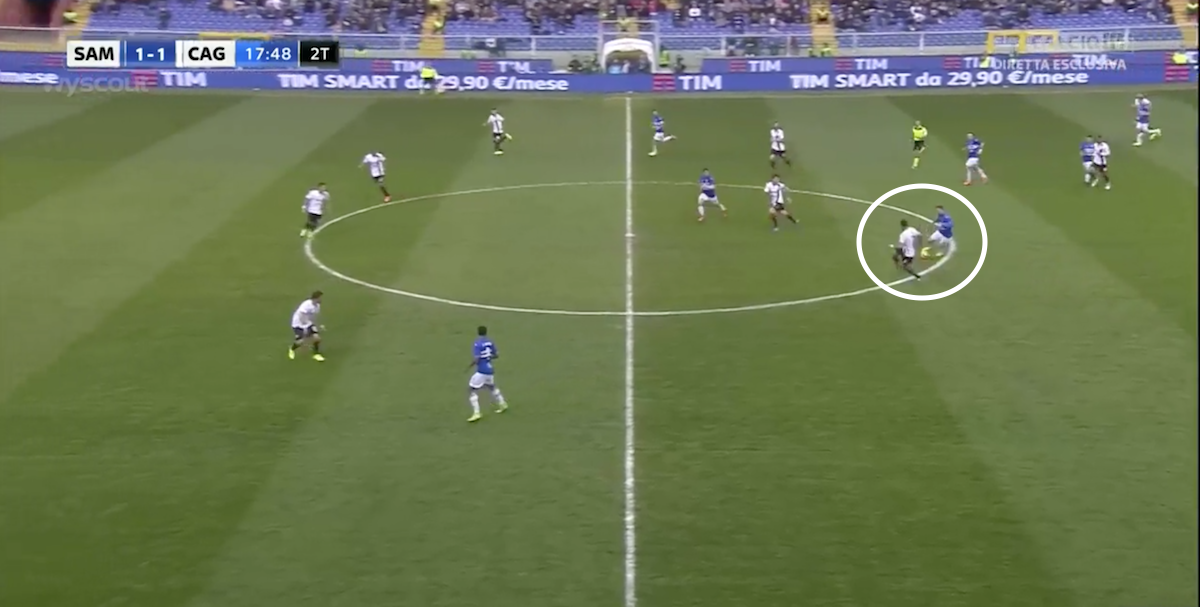 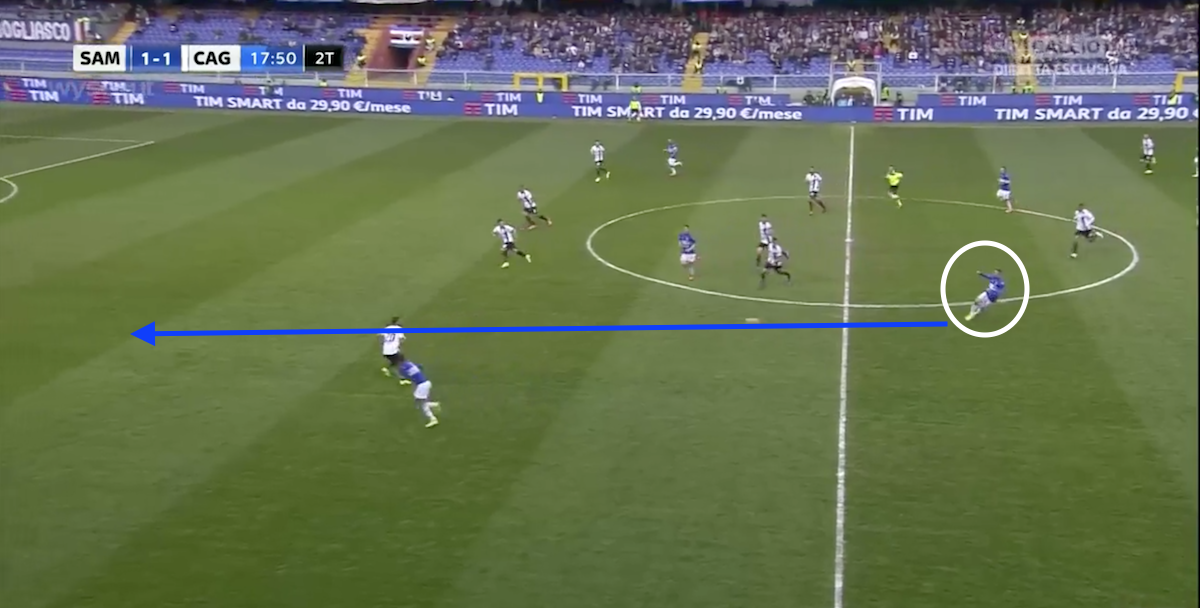 This time around you get to see the creative side of his game. Sampdoria win the ball back in the first picture and Linetty bursts into the space ahead of him. The ball is played to him and he intelligently cuts outside which gives him more space to operate in, with many of the opposition’s players looking to protect the central area.

After creating some space for himself he plays a delightful, perfectly weighted pass inside of the right-back for his teammate to get in behind. It’s a pass which decimates Cagliari and takes seven of their outfield players out of the game. They go from all being behind the ball to all facing their own goal as they’re forced to make up the ground.

How does he compare to what Spurs and Everton already have?

Linetty is averaging 3 tackles and 0.7 interceptions per 90 minutes. For context, when looking at the Everton squad only Idrissa Gueye makes more tackles (4.8), but only Ross Barkley makes fewer interceptions than the Polish midfielder. Perhaps anticipation is an area of his game that he could work on.

No Spurs player in their entire squad makes more tackles than Linetty. The closest pair being Mousa Dembele (who makes 2.9 tackles) and Victor Wanyama (2.6). However, the dominant Spurs duo do make more interceptions than their Sampdoria counterpart with Dembele on 0.7 and Wanyama on 1.3. 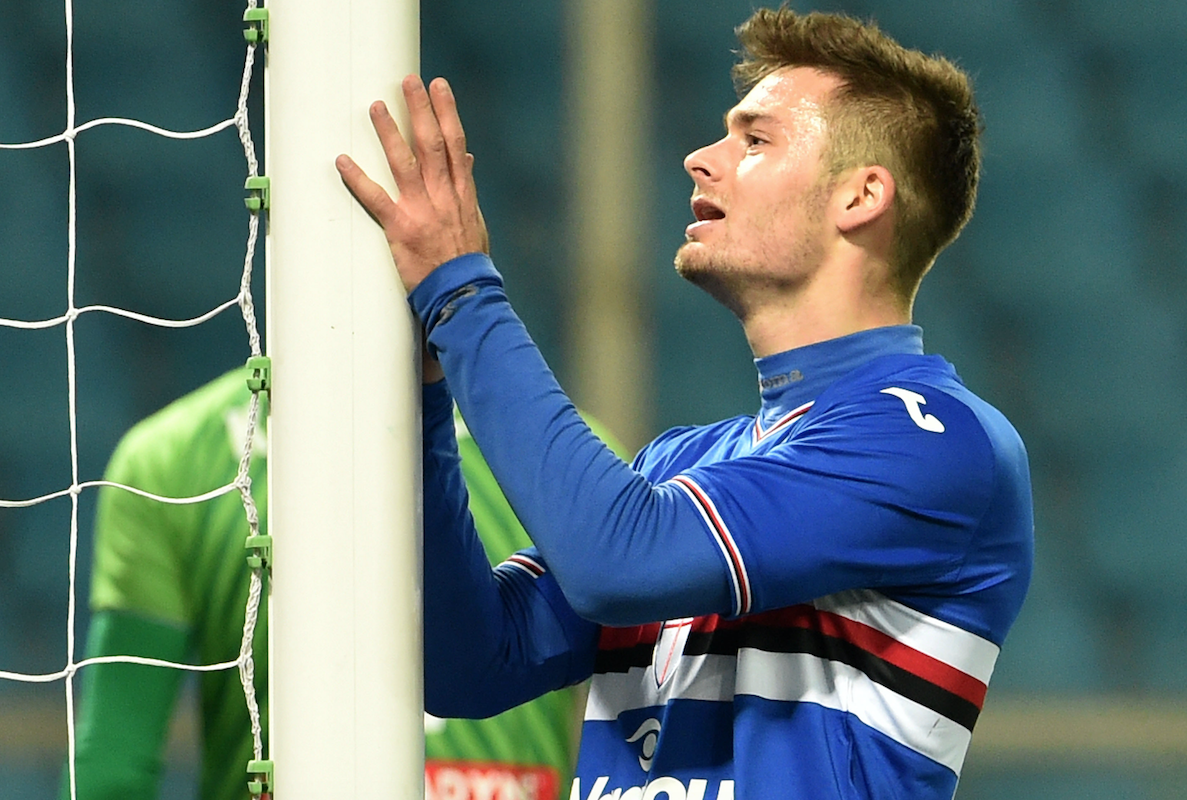 In terms of offensive contribution, the former Poznań player has three assists to his name — one being extremely fortunate after a rogue first touch fell into the path of a teammate who finished. He’s completing 1.3 dribbles and 82.2 per cent of the 34.2 passes he attempts.

In terms of pure centre-midfielders, Everton’s Tom Davies has the most assists this season with two. None of the midfielders at Goodison Park complete as many dribbles as Linetty but they all attempt more passes than him per 90 minutes, and all have an 82 per cent or more success rate.

Mousa Dembele completes an astonishing 3.2 dribbles per game, but after the Belgian no other midfielder at White Hart Lane completes more than the in-demand Pole. However, both Wanyama and Dembele both average over 20 more passes than Linetty, but that’s perhaps due to the style Spurs use. They look to dominate possession and the midfielders are key to building from the back.

He breaks the lines with his incisive passes and his dribbling ability takes players out of the game. He presses high up the pitch and moments later he’s covering for his full-back. On paper, he does share similarities with midfielders in both squads but overall he’s unlike any player either team currently have at their disposal. 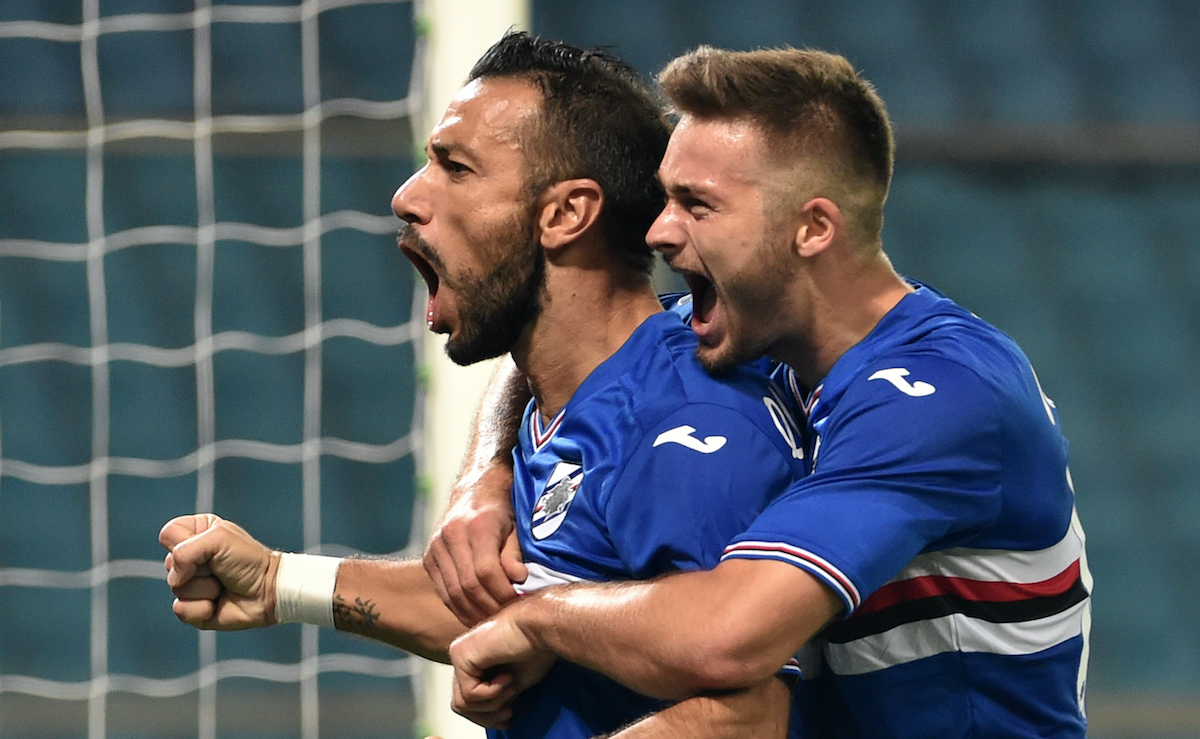 But is that because of the systems both teams are playing? Would Linetty be shackled in the systems Pochettino and Koeman use, or would he be able to replicate his Sampdoria form in the Premier League?

He could be a great squad player to have but Sampdoria, who are comfortable in mid-table, don’t need to sell, so it may take a tempting offer for them to part with the player.

A bidding war could see the Italian side make a quick return on their investment in a little under 12 months, but will either of the Premier League sides pay big money for a player who isn’t a guaranteed starter?

WHO IS THE PREMIER LEAGUE'S BEST EVER GOALKEEPER?