News broke yesterday of Paris Saint-German‘s sensational plan to sign Neymar from Barcelona, with the Ligue 1 side said to be prepared to trigger the player's €222million release clause.

The Brazilian's potential departure is by far the biggest news around the Camp Nou at the moment, but Barça remain adamant that their No.11 will not be sold and are pressing on with trying to secure their top summer targets.

Portuguese right-back Nélson Semdo has already arrived, joining the Catalan giants in a €30million deal from Benfica, and the club have identified central midfield and the wings as areas for further reinforcements.

The Football Whispers Index utilises a unique algorithm to assess the validity of every transfer rumour, giving each a score out of five; the higher the score, the more likely the deal is to materialise.

Here, we take a deeper look at the top five Barcelona transfer rumours to see who could be the next star to join Ernesto Valverde's Blaugrana. 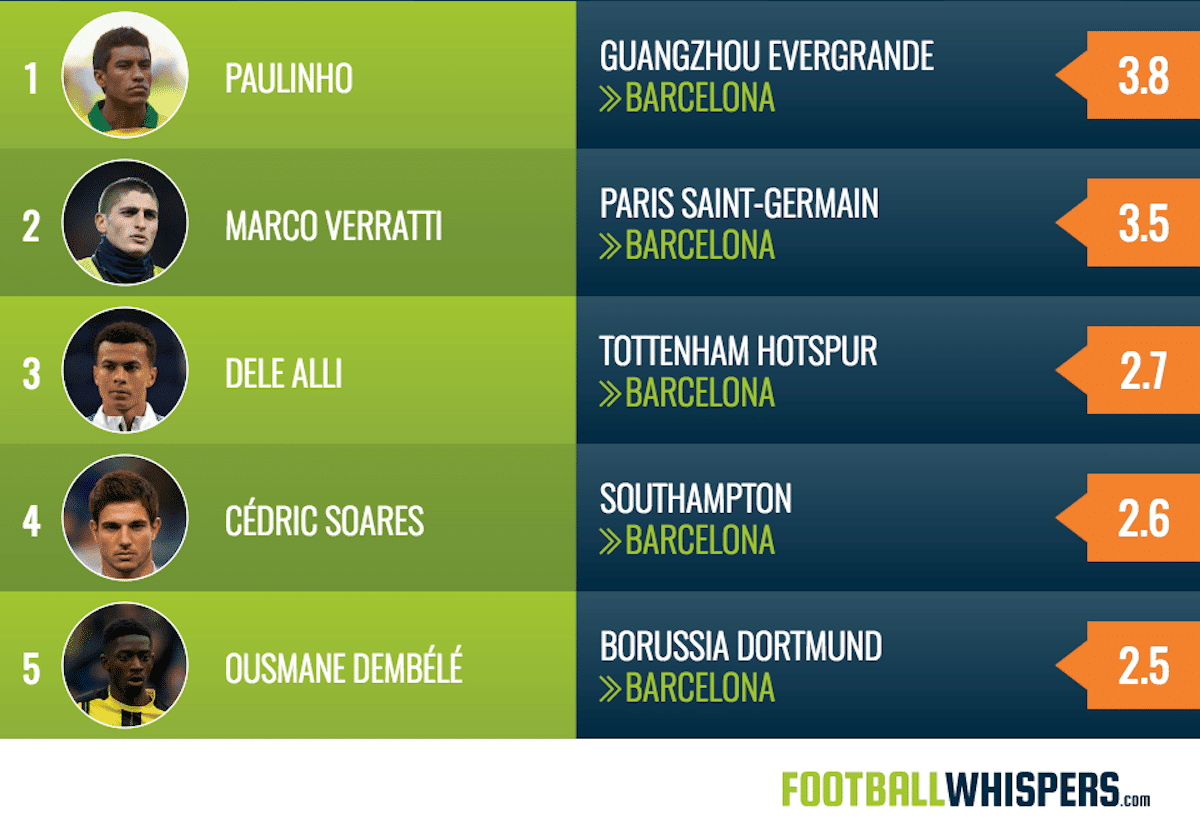 Former Tottenham Hotspur midfielder Paulinho has been linked with above to the Camp Nou for several weeks now, much to the surprise of Premier League fans thanks to his abject displays during two seasons at White Hart Lane.

But the 28-year-old has impressed on the international stage with Brazil and produced a consistently high level of performance with Guangzhou Evergrande in the Chinese Super League since moving east in 2015.

According to Catalan newspaper Sport, Barcelona will consider no alternatives to Paulinho and are intent on landing the midfielder. However, their highest offer to date has been €30million plus bonuses, while Guangzhou will not allow him to leave for a penny less than his €40million release clause.

Italian playmaker Verratti was the superstar name at the top of Barcelona‘s wish list this summer, with the Spanish side thought to have offered €100million for his signature.

The player was keen on a move to the Camp Nou, where he would assume the role of chief midfield creator with Xavi gone and Andrés Iniesta ageing. But PSG have outright refused to sell.

However, there could be a twist in the plot with the Parisians' interest in Neymar. The Ligue 1 side are said to be keen to hang onto Verratti even if the Brazilian magician moves to the Parc des Princes, but allowing him to leave as part of the deal would soften the financial blow of forking out the full €222million.

Sport claimed this week that the 24-year-old former Pescara man has emerged as a Manchester United transfer target.

The player is said to be considering hiring Mino Raiola – the agent responsible for taking Paul Pogba, Zlatan Ibrahimović, Henrikh Mkhitaryan and Romelu Lukaku to Old Trafford – fuelling rumours that Verratti could be next. 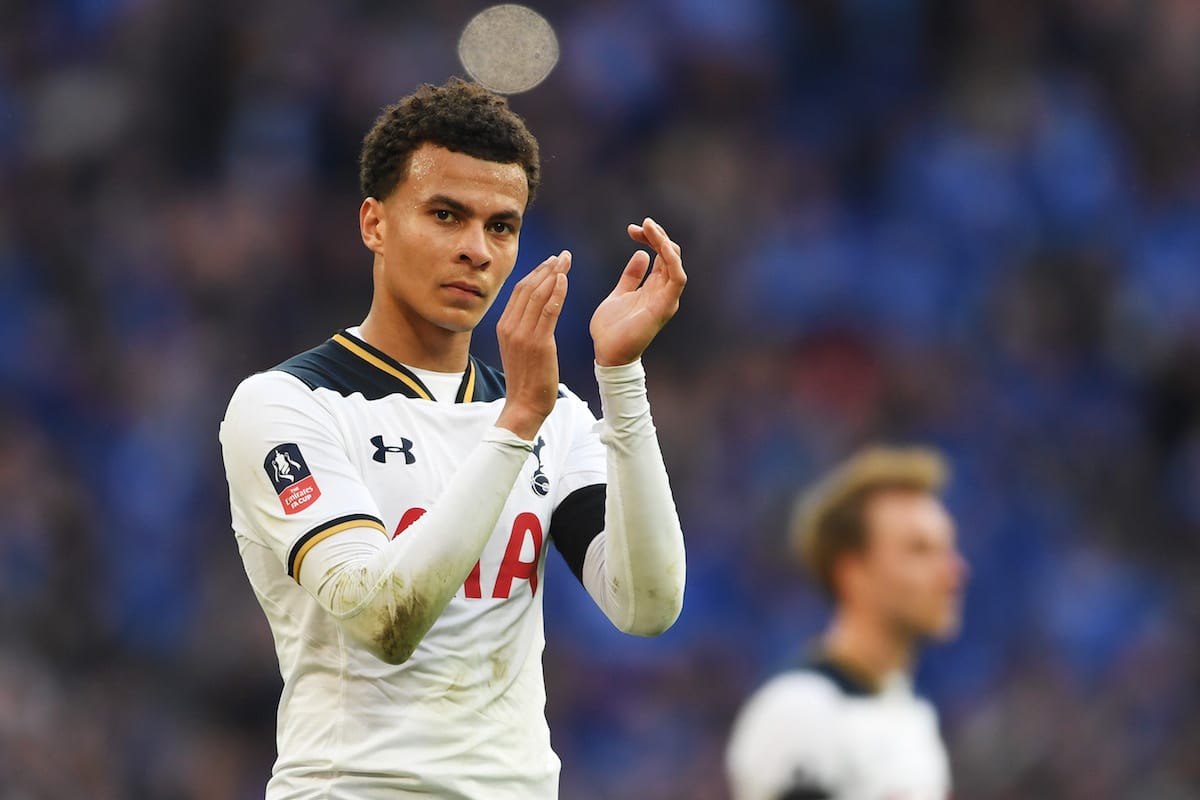 Another left-field Barça target is Tottenham‘s Dele Alli. The English midfielder was the subject of Real Madrid transfer rumours earlier this year but Diario Gol now claim the Catalan side are hot on his tail.

However, it remains extremely unlikely the 21-year-old former Milton Keynes Dons youngster will be departing north London this summer. If Spurs are to be talked into parting ways with their prized asset, a world record fee might well be required.

That would rule Barça out of the running as things stand. But if Neymar does move to Paris, the Blaugrana will be emboldened with huge sums to splash in the transfer market and it will very quickly become apparent whether or not Alli really is on their radar. 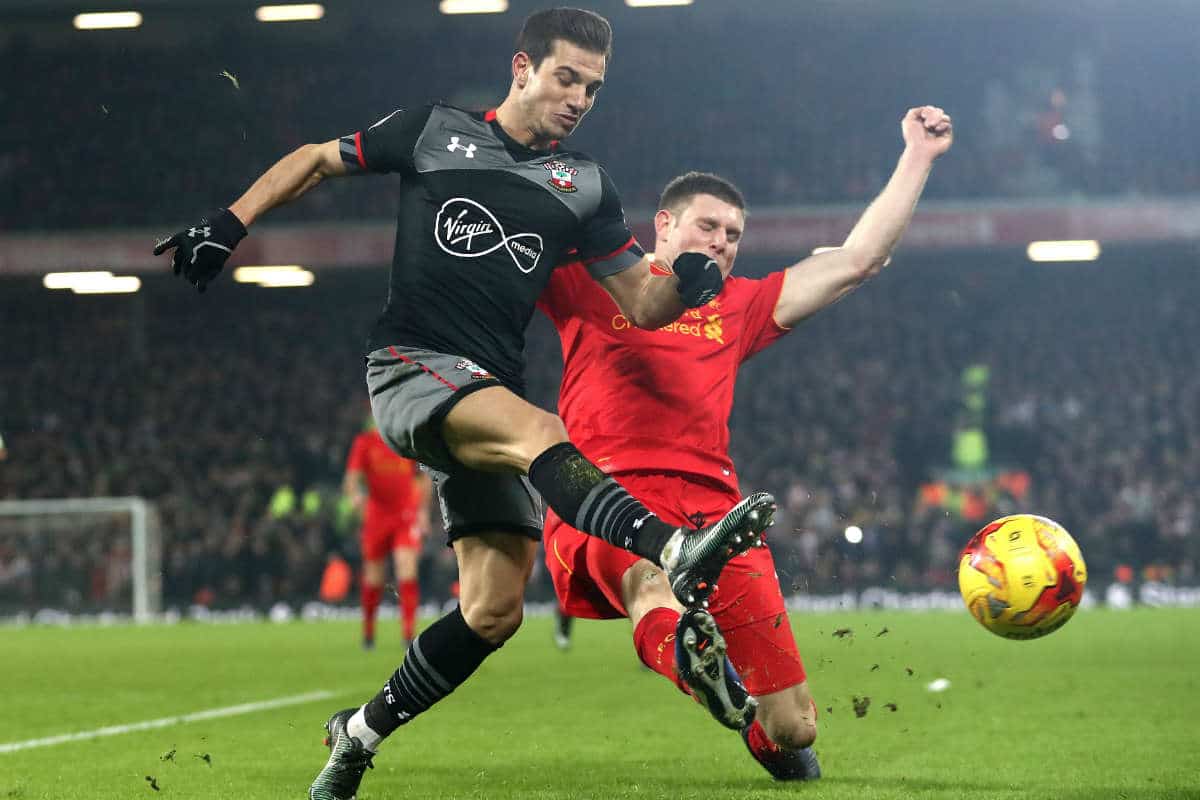 Having backed out of their efforts to sign Héctor Bellerín from Arsenal, The Sun reported last month that Barcelona were considering a move for Southampton right-back Soares.

The Portuguese international was not an obvious candidate for a switch to the Camp Nou given the calibre of some of the names previously connected with the Spanish club.

But the 25-year-old has shown that he is a reliable and effective full-back during his time at St. Mary's and would not be overawed by a move to a bigger club.

However, Barça's capture of Semedo from Benfica has provided them with a new first-choice right-back. If they continue to pursue Soares, he will only be considered a back-up to his compatriot.

Barcelona are believed to want a winger to allow Lionel Messi to move inside from the right flank. French prodigy Dembélé is thought to be their top target with club officials travelling to Germany last month to discuss a deal with Borussia Dortmund.

The German side have maintained that they intend to keep the versatile 20-year-old, whom they signed from Rennes for £12.75million last summer, but Barcelona lodged a £44million bid for the player according to Bild.

The offer was judged to be far too low and was rejected out of hand, with BVB valuing Dembélé at more than £80million.

Reports in Spain then suggested than Barça had put the move on ice until next year, unable to fund the transfers of the Frenchman and Verratti in one window.

However, once again the Neymar situation could change things. If the 25-year-old leaves, Dembélé is the ideal candidate to take his place.