The National League can be an unpredictable division. Few people would have expected that cash-strapped Macclesfield Town would be champions of the fifth tier in 2017/18, while even fewer considered Boreham Wood to be play-off candidates at the beginning of the last campaign.

With former Football League clubs Stockport County, Kidderminster Harriers, York City and Torquay United dropping down into the National League North and South over the past six years, this really is a division where anything can happen.

We take a look at three of the league’s promotion hopefuls, analysing their chances of reaching League Two at the end of the season.

The Manchester United icons have taken the club from the eighth tier of English football to the brink of the EFL in just four years, and have built an expensively assembled squad capable of taking the final step this season. 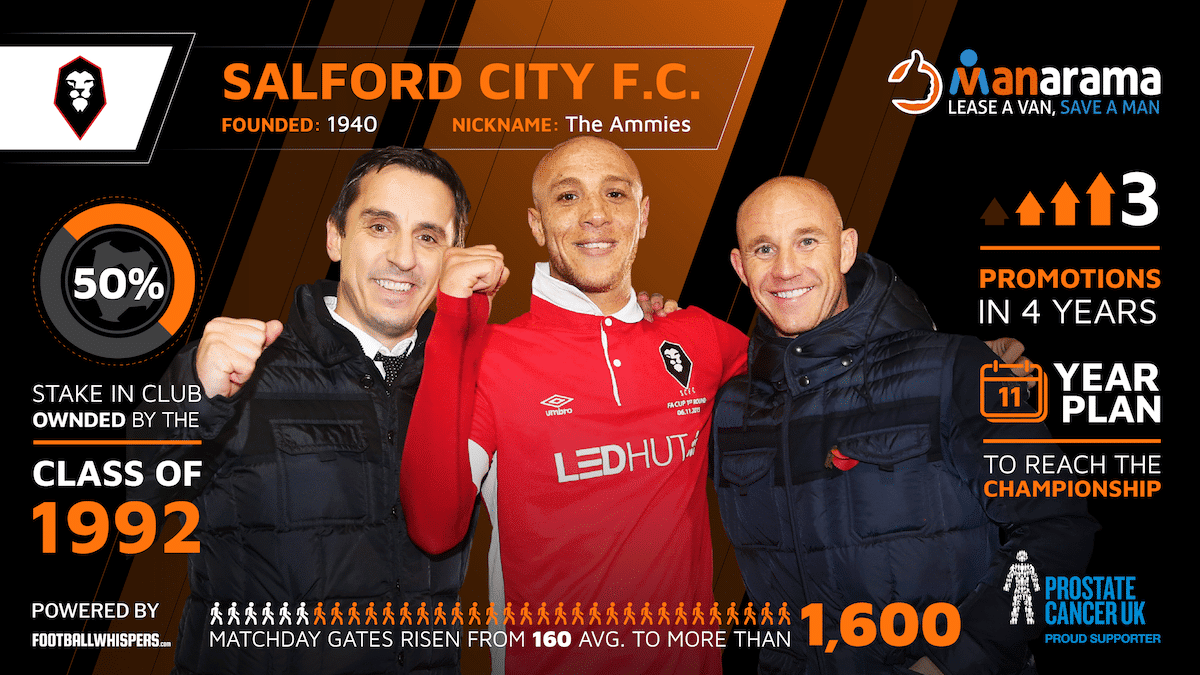 The Lancashire side’s star summer signing was Aberdeen poacher Adam Rooney. The striker is reportedly commanding a salary of over £4,000 a week, but arrives at Moor Lane with a burgeoning reputation from his spell north of the border.

Rooney found the net 88 times in 197 games for the Dons, and has continued that goal-scoring form at National League level, rising to the summit of the top scorers chart with seven strikes already this season.

The man tasked with leading Salford to the promised land of the EFL is 46-year-old manager Graham Alexander. The former Preston North End and Burnley defender can count himself somewhat unlucky to be managing in the fifth tier after successful stints at Fleetwood Town and Scunthorpe United.

Alexander won promotion from League Two with the Cod Army before taking Scunthorpe to the League One playoffs in 2016/17. He was harshly sacked the following year despite the Iron sitting in fifth place, and his appointment was certainly seen as something of a coup by Salford ahead of the current campaign.

History suggests that it can be difficult for newly promoted teams to win the National League title at the first time of asking. Similarly well-funded clubs like Rushden & Diamonds, Fleetwood Town and Forest Green Rovers took at least two seasons to clinch promotion to the fourth tier, but a strong start will have Ammies’ fans believing that they can buck that trend in 2018/19.

It’s hard to believe that Wrexham have been a National League club for over a decade – the Welsh side dropped through the League Two trapdoor in 2008, to end an 87 year stay in the Football League.

Fans of the Dragons went on to experience play-off heartache in three consecutive seasons from 2010–2013, as they attempted to make a quick return to the EFL. 2011/12 proved to be the cruellest – Wrexham finished second with a staggering 98 points, but were piped to the title by Fleetwood Town and lost to Luton Town in the playoff semi finals.

Things were to get even worse for the Dragons’ faithful. The oldest club in Wales haven’t troubled the top seven in five years, with a run of mid-table finishes that would dampen the enthusiasm of even the most optimistic supporters.

Fast-forward to September 2018 and things are starting to look much rosier at the Racecourse Ground, largely thanks to first-time manager Sam Ricketts. The former Premier League full-back looks to have taken to management like a duck to water, with his side currently sitting second in the National League table. Wrexham have lost just once in 11 games and have only conceded five goals all season – the lowest in the division.

A number of shrewd additions have arrived in north Wales over the summer – notably striker Mike Fondop-Talom from Halifax Town, who has five goals already this term. Winger Jordan Maguire-Drew also joined on loan from Brighton & Hove Albion, and will be hoping to recapture the form that saw him score 16 goals for Dagenham & Redbridge in 2016/17.

While it is common for new managers to enjoy a honeymoon period in their first job, things can often unravel once the challenges of management reveal themselves over a gruelling 46-game campaign. How Ricketts handles those situations will most likely determine whether Wrexham enjoy a successful season or continue their long wait for promotion.

Few pundits would have placed National League North play-off winners Harrogate Town amongst their pre-season predictions for promotion. The picturesque Yorkshire town is probably better known for Betty’s Tea Rooms than it is for football, and has consistently been voted ‘the happiest place to live in Britain’.

If Town supporters were happy before then they must be simply ecstatic now – Harrogate sit on top of the National League table, with 25 points from 11 unbeaten matches.

The Sulphurites have never previously played in the fifth tier and have spent much of their history in the lower reaches of the non-league game, playing in the Yorkshire League until 1982 and never rising higher than the Northern Premier League until 2004. The club’s Wetherby Road stadium reflects their historic status, with a capacity of just 4,000 people, 500 seats and an artificial 3G pitch.

But Harrogate Town are an ambitious club, and have been on the rise since they were taken over by chairman Irving Weaver in 2011. His son Simon Weaver has been in the managerial hot seat since 2009 and has overseen a remarkable turnaround in the team’s fortunes.

Harrogate only avoided relegation from the National League North in 2009/10 as a result of Northwich Victoria’s demotion for financial issues, but have since turned professional and won promotion to the highest level of the non-league game. His team of relatively unknown players have taken that momentum into this season, raising the question of whether they could reach the EFL at the first time of asking.

Their hopes largely rest on the shoulders of star striker Jack Muldoon. The former Lincoln City man was part of the Imps’ run to the FA Cup quarter-final in 2016/17 and has six league goals already this term. If he can keep scoring then Harrogate Town could well be the surprise package to watch out for when we reach the business end of the season.