Liverpool’s switch to a 4-3-3 system for this season was a big call, though after 28 Premier League fixtures in this shape, it makes sense.

Jürgen Klopp has moved away from the 4-2-3-1 he was associated with throughout his time as Dortmund manager, and one of the primary reasons behind his decision was the presence of a fluid and effective front three.

Philippe Coutinho broke out during Liverpool’s title challenge in 2013/14 as an attacking midfield prodigy of rare technical mastery and creativity. Comfortable on the ball, capable of sharp movements and a sublime passer, the Brazilian has since gone on to occupy the nominal left wing berth in Klopp’s 4-3-3 with aplomb.

He is joined in the front three by his compatriot, Roberto Firmino. Versatile, audacious and an excellent dribbler, Firmino has adapted well to the role of striker in the centre of Liverpool’s front three this season. And, to his right, the pure speed, intelligent movement and combinative quality of Sadio Mané has brought added penetration to the attack since his arrival from Southampton last summer.

While Klopp’s side have struggled for clean sheets this season, they boast arguably the finest attack in the Premier League. No other team can match them for goals scored, and the synergy of Coutinho, Firmino and Mané deserves much of the credit for this.

Here, Football Whispers takes a look at the dynamics of Liverpool’s front three.

OVERVIEW OF THE SYSTEM AND PLAYER PROFILES

While the front three is the most riveting aspect of Liverpool’s system, it does not exists in isolation. Behind Coutinho, Firmino and Mané are a midfield three often featuring Jordan Henderson as the holding midfielder, with Adam Lallana and Georginio Wijnaldum as more attack-minded central midfielders.

Defensively, goalkeeper Simon Mignolet is protected by a central defensive duet of Joël Matip and one of Dejan Lovren or Ragnar Klavan. Meanwhile, the full-back positions are occupied by Nathaniel Clyne on the right and James Milner on the left.

Coutinho has always been seen as a trequartista, someone who prefers to operate between the middle and attacking third with some degree of creative license. His right-footedness and tendency to drift infield into a more central area have been nourished in his left-sided role within Liverpool’s front three. Indeed, he only truly appears on the left flank when in the defensive phase, where the 4-3-3 system becomes more of a 4-5-1. 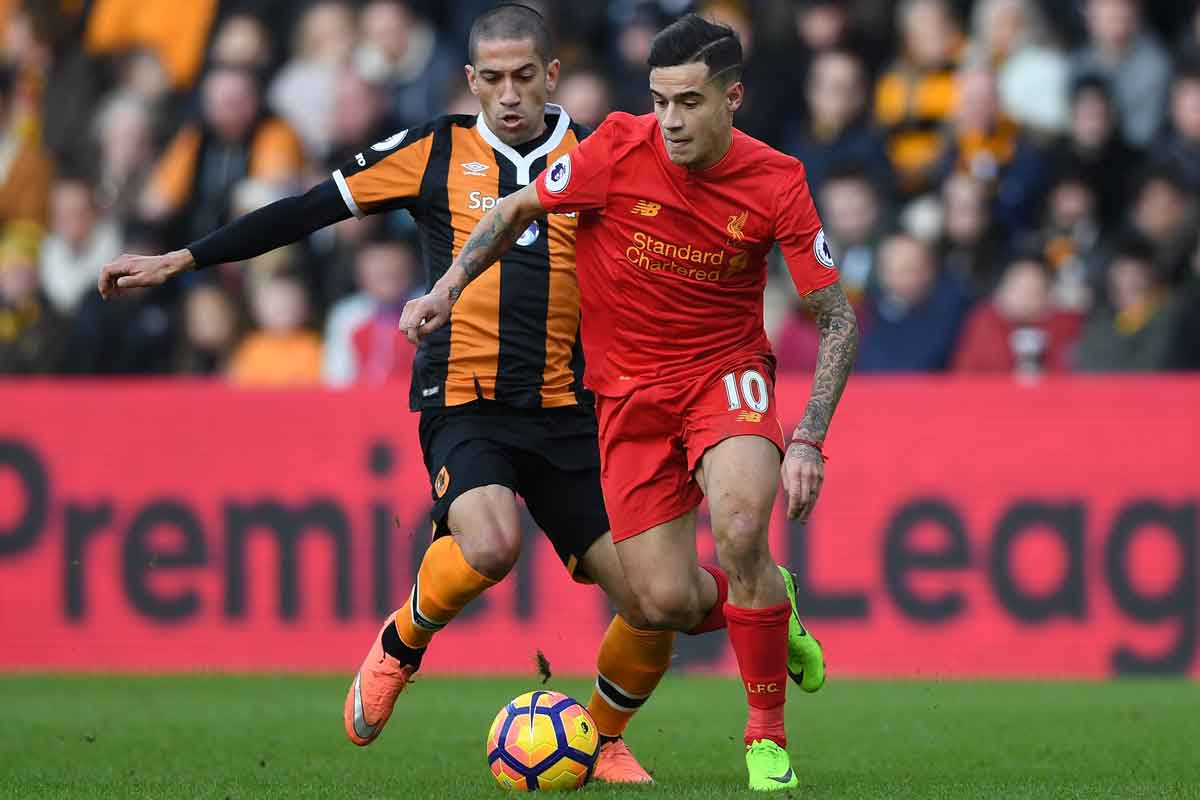 read more: why Mamadou sakho should still have a future at liverpool

Mané does the same defensively on the opposite flank, though in attack he presents a slightly different threat to Coutinho. While the Senegalese is also capable of playing as an out-and-out number 10, he has spent much of his career on the right wing, where his speed and directness can be fully utilised for the performance of both player and team.

Between Coutinho and Mané, Firmino is no false nine, despite the fact he came to Liverpool as an attacking midfielder. While he no longer plays off a striker, he has many of the same responsibilities of a number 10, only he now has a more important role in the first line of his team’s defence.

HOW THE FRONT THREE WORKS

As discussed above, Coutinho has a natural inclination to wander inside as opposed to holding a wide position in the attacking phase. Thus, he is comfortable operating in and around the left half-space, often between the opposition’s right-sided centre-back and right-back.

This is a particularly dangerous space for a player of Coutinho’s profile to occupy, as it gives him a great deal of opportunity to exploit. In terms of potential passing angles, when attacking from this area he has direct links to both the left wing and the centre of the pitch, while also retaining a good view of the right-hand side. And, with his exceptional technique, he is able to access all of these areas effectively through medium and long-range passes.

Coutinho’s appearing in this channel also presents the opposition defensive line with a dilemma, as this movement often takes him onto a different horizontal line to that of Firmino and Mane. By taking up a deeper position in the left half-space, he draws attention away from his attacking team-mates, creating the chance for runs in behind the opposition’s defensive line. An example of this is seen below, where Arsenal’s right-sided centre-back is distracted by Coutinho’s movement, allowing Firmino to run in behind. 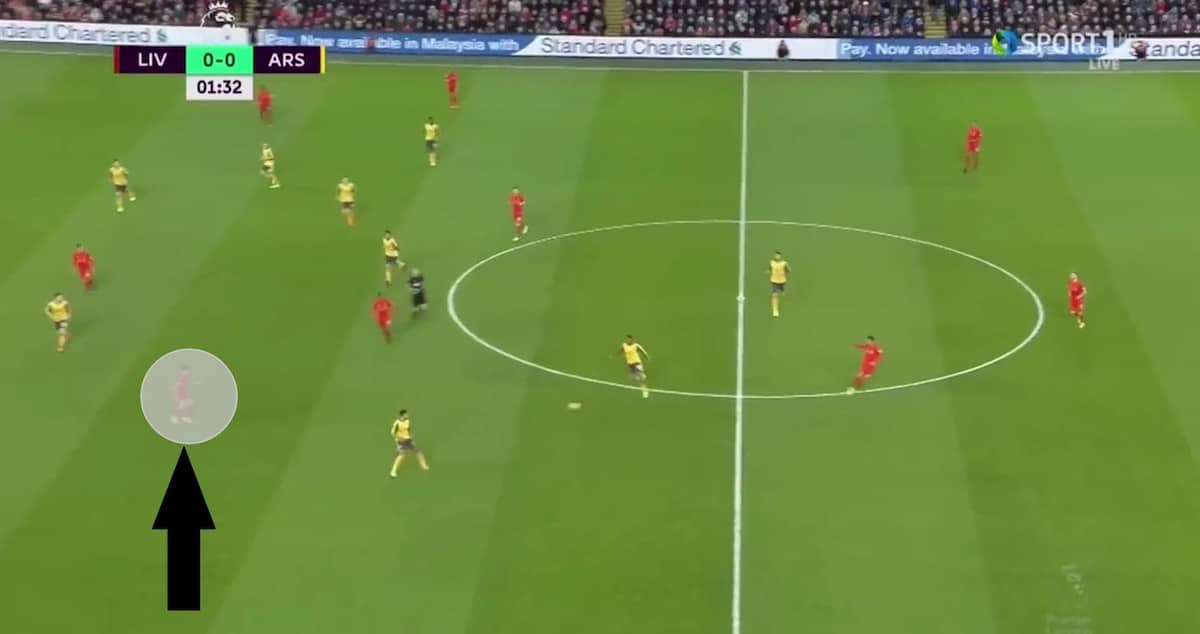 As the nominal number nine in attack, though nine-and-a-half would perhaps be a more appropriate description, Firmino is tasked primarily with providing possibility for combinations across the front line with his movement, skill and link-up play. Often, he will be seen in close proximity to either Coutinho or Mané, depending on which one is about to receive the ball, offering a viable connection to his team-mates. This ensures that there is a constant chance for interchanges.

An example of this can be seen in the images below, with the black line indicating the linkage between Firmino and Coutinho, then Firmino and Mané. 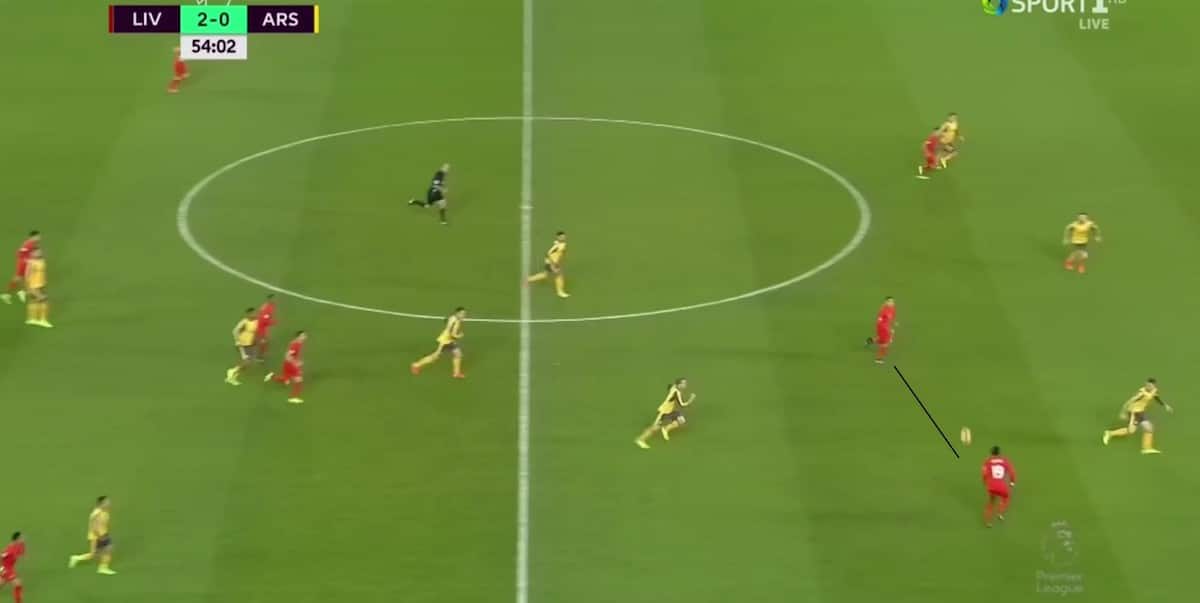 Firmino is also crucial to Liverpool’s pressing game. One key component in Klopp’s philosophy throughout the German’s managerial career has been to defend aggressively high up the pitch, and Firmino often acts as a good instigator of the attacking press.

While Firmino must offer good lateral movement across the frontline, Mané is perhaps the most dynamic of Liverpool’s front three. He mixes up his positioning: sometimes holding an extremely wide space so as to try and stretch the opposition’s defensive line and isolate himself one versus one against the opposition left-back, sometimes moving infield into the right half-space, and at other times moving up where his pace creates the opportunity for breaking the defensive line.

An example of this is seen in the below image, which also depicts the occasional forward movement of Adam Lallana, done in this instance with a positional interchange with Firmino, in order to disrupt the opposition’s defensive structure.

Fluidity and creative license are central aspects of Liverpool’s attacking play, and the front three are, as seen above, vital to this. There is no real fixed formation, as Klopp briefly mentioned during an interview with Sky Sports last year. When asked about his exact system, he replied, “I don't think about it, to be honest.”

However, the movements must be both expertly co-ordinated and undertaken by intelligent players in order to be effective in pulling apart the opposition and creating scoring opportunities. With this in mind, it’s worth considering the statistics to show Coutinho, Firmino and Mané’s competence.

Liverpool have played 13 Premier League games with all three starting in the attacking trident. Of these 13 games, they have won nine, drawn two and lost two, scoring 32 goals and obtaining 29 points. Without this front three, Klopp’s side have played 15 games, of which they have won seven, drawn five and lost three, scoring 28 goals.

Evidently, the effectiveness of Klopp’s 4-3-3 is highly reliant on the offensive synergy Coutinho, Firmino and Mané.