Claude Puel was not the most popular choice as Craig Shakespeare’s successor in the Leicester City hot seat. The Frenchman’s only previous Premier League spell was an unconvincing season spent with Southampton that saw dull football and a decline in results.

Following his dismissal by the Saints it was assumed he wouldn’t rock up at any other English top flight club in the near future, yet within six months he was back in the game, courtesy of the former champions’ desire to once again not go for the obvious option.

Leicester broke with convention when appointing Claudio Ranieri several years ago and the decision paid dividends – within the space of one year under the Italian’s guidance they went from relegation certainties to title winners.

Puel is not expected to perform miracles of that sort, but early signs are he could bring about changes in the way the team play, changes that have been required for quite some time. Here, we at Football Whispers analyse some of the key tactical modifications made so far.

SIMPSON AND FUCHS GET FORWARD MORE

One of the most obvious changes Puel has already brought in is a change in attacking shape. While defensively Leicester retain the same look as seen under Shakespeare and Ranieri – a 4-4-2, deep block and low press with an emphasis on retaining the defensive structure – they now attack in a different set-up.

Previously it was the duty of the two wingers’ in the Foxes’ midfield to provide the width, holding positions near the touchline. However, the width is now provided more often by the full-backs, Danny Simpson and Christian Fuchs.

Simpson ten per cent higher than their season average – saying: “[Puel] wants me to push forward and leave space in the hole for Riyad [Mahrez] or Demarai [Gray], or whoever.

“He wants me to be an outlet and, if I can get in behind and fire in some low crosses for the strikers, that is what I will try to do. It is a different role, an exciting role. I am looking forward to it…I am used to covering for Riyad and not be allowed to go past him, but now…I can be an option on the outside and the central midfielders can cover.”

Under Puel, Leicester have morphed from a more conventional 4-4-1-1 to a 4-2-3-1. The full-backs’ greater adventure allows the two nominal wingers to move infield and operate more centrally in possession. This creates a narrower attacking midfield structure, seen below, that opens up a number of possibilities. 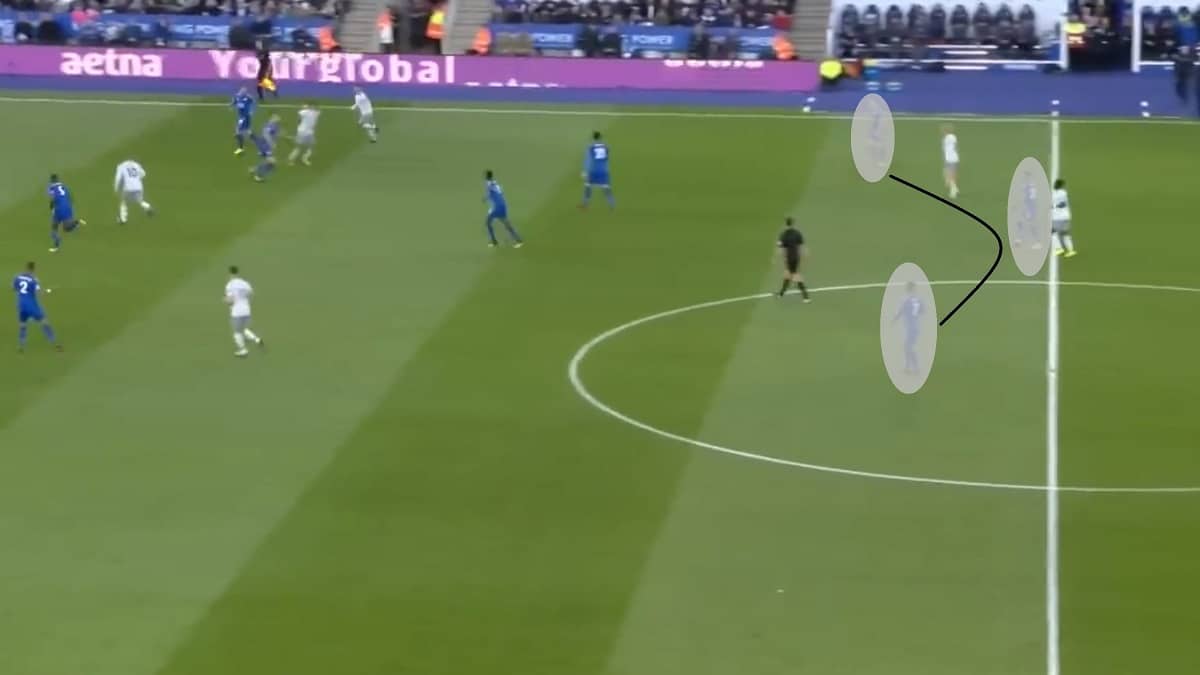 Firstly, it allows Leicester a greater chance to to play through the opposition, rather than around them. With three attacking midfielders looking to get between the opponents’ defensive and midfield lines, there are more outlets for vertical forward passes that are more dangerous than simply circulating the ball from side to side and back again.

Secondly, this narrower attacking midfield structure makes Leicester more effective whenever they do decide to go long. Direct balls over the top for Jamie Vardy will remain an option for them when all else fails, only now they will have three players – rather than the previous sole support striker – looking to get on the end of any knockdowns and win the second balls.

In the same vein, Puel’s side are better prepared to win possession back quickly when in defensive transition. With more players operating centrally in these situations, they have greater access to the ball should it be turned over to the opposition.

Finally, with the attacking midfielders – three of Mahrez, Gray, Marc Albrighton and Ben Chilwell – looking to drive inside and attack the opposition defence, there is greater likelihood of Vardy sneaking in behind an otherwise engaged back line, making full use of his pace to exploit any available space on the blind side of the defence and creating the chance for through balls in the final third.

Good managers will always look to make the most out of their best players. Whenever a new coach takes charge of Barcelona, one of the first questions is how they will utilise Lionel Messi’s talents.

Leicester cannot boast an all-time great scorer and creator, but they do have players whose attributes were previously underemployed.

Harry Maguire is now a regular fixture in the England national team, who under Gareth Southgate are increasingly focused on playing out from the back. This is no coincidence: the former Hull City man is seen as one of the finest English ball-playing centre-backs around today.

However, under the previous tactical regime of direct balls and swift counter-attacks, his quality in possession was not maximised. Under Puel, this has already changed, with the 24-year-old encouraged to play penetrative passes through the opposition’s defensive block, ideally to one of the three attacking midfielders looking to get between the lines.

Another of Leicester’s best players, Mahrez, also looks set to play an increasingly influential role under the Frenchman’s auspices. In Puel’s first game, a 2-0 win over Everton, the Algerian took up a role directly behind Vardy. From there his spatial awareness to open up or move into passing lanes, technical quality and creative edge were of huge value.

Leicester may not be challenging to win back the Premier League title any time soon, but under Puel a tactical revolution is now underway. And, with four points from a three-game spell that included a clash with Manchester City taken so far, the early signs are highly promising.