The Pep Guardiola revolution took a while to get into full swing. During the tactician’s first season at Manchester City, the club spent big. And, ahead of his second campaign at the helm, the club are spending even bigger.

Indeed, City’s net spend in the summer transfer window thus far is higher than that of potential Premier League title rivals Arsenal, Liverpool and Chelsea put together. The expenditure has facilitated the arrival of a number of important new signings to refresh and reinforce the squad.

Benjamin Mendy was the latest to join, following Bernardo Silva from Monaco. Danilo and Kyle Walker also signed to enhance Guardiola’s full-back choices significantly, while Ederson is expected to supersede Claudio Bravo as the No.1 goalkeeper.

However, while Manchester City’s squad is looking stronger than before, there are a few areas of uncertainty that will require astute decision-making from the manager.

Here, Football Whispers analyses three of the main selection headaches for Guardiola ahead of the 2017/18 season.

Perhaps the most puzzling piece of summer business conducted by Manchester City is their signing of two right-backs in Danilo and Walker. Both are attack-minded players who prefer operating out wide on the right, and both are – at 26 and 27 years of age respectively – at similar stages in their careers.

Neither will want to settle for a place on the substitutes’ bench yet, given the nature of Guardiola’s tactics and their profiles, one may have to do just that.

Danilo struggled during his time at Real Madrid and found himself behind the exceptional Dani Carvajal in contention for the right-back slot in Zinedine Zidane’s 4-3-3 and 4-3-1-2 systems. Despite this, his numbers were positive.

Last season, the Brazilian averaged three tackles per game as well as 2.4 interceptions. In both areas his statistics markedly better than those reached by Walker with Tottenham Hotspur.

Danilo also contributed more passes per game and did so at a higher rate of success, although it’s worth noting the calibre of players around him – notably Luka Modrić and Toni Kroos – was of the highest possible standard.

In the final third, Walker is perhaps a more effective outlet than his newfound positional rival. Not only did he complete comparatively more dribbles last term, but he averaged more key passes and set up more goals.

Given his experience of the Premier League, solid form in recent years and greater productivity, the Englishman can expect to start on the right side of Guardiola’s defence. Danilo will back him up, though he may also be utilised on the left instead of Mendy depending on the situation.

David Silva was central to Guardiola’s system and style last season both figuratively and literally. The Spanish string-puller often played further infield, with Raheem Sterling and Leroy Sané taking up the wide positions.

The role allowed the 31-year-old to be more involved in Manchester City’s play, particularly when progressing possession into the final third. His subtle, floating movement and incisive passing were integral – only Kevin De Bruyne was more productive in a creative capacity.

Now, however, David finds himself under pressure from his namesake Bernardo, a player of similar attributes who is almost ten years his junior.

The newcomer alerted most of Europe’s top clubs with his fine performances for Monaco during their run to the semi-finals of the Champions League last season, thrilling with his blend of exquisite control and penetrative passing. 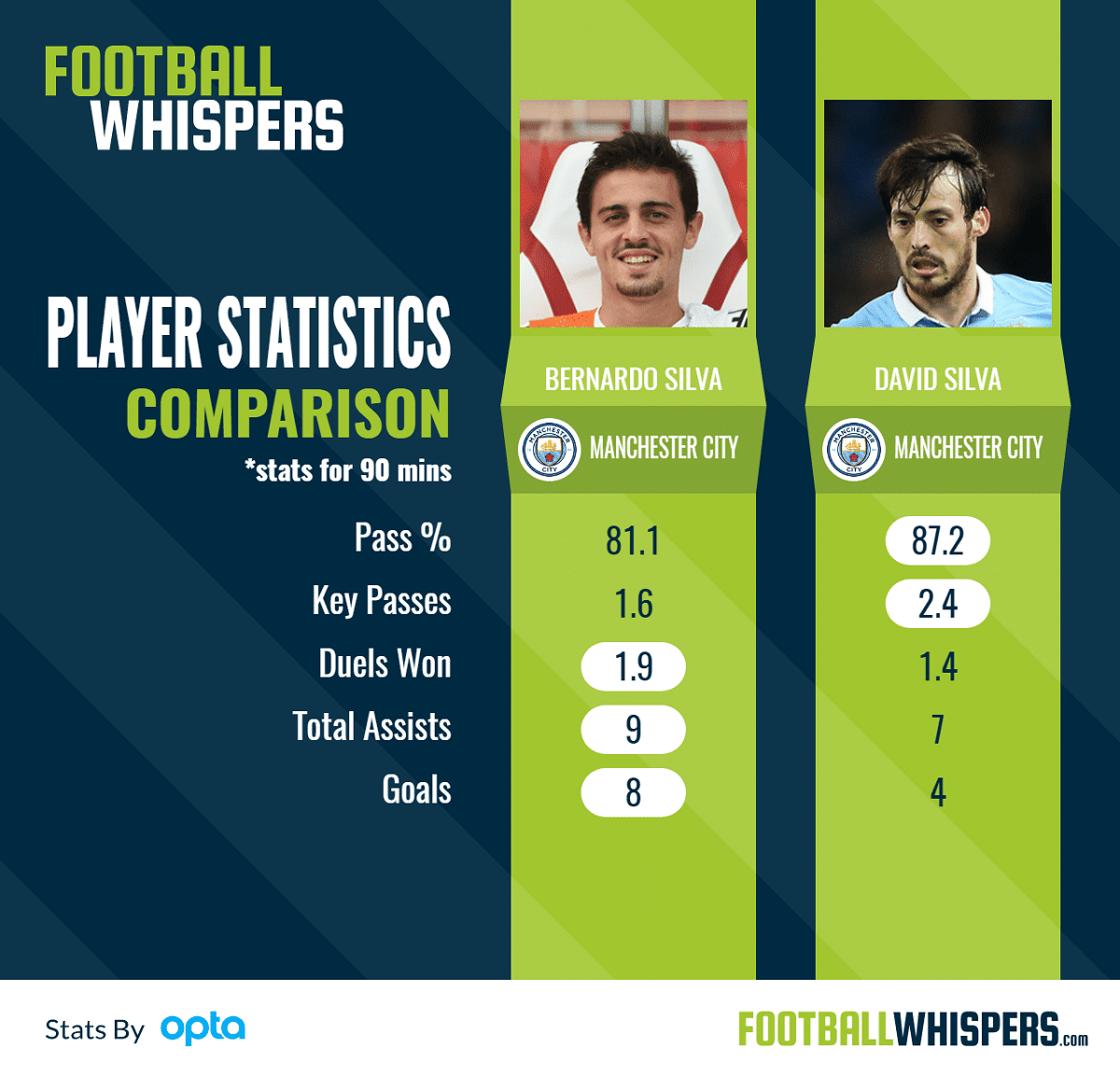 In possession, however, it would appear that the younger man still has plenty to learn from his older colleague. David Silva’s pass completion rate of 87.2, passes per game of 61 and 2.4 key passes on average were all comparatively higher.

It’s worth noting, though, that those figures were compiled while playing within the confines of a Guardiola system, where quality, effective possession is more co-ordinated than in Leonardo Jardim’s Monaco, who are more transition-orientated.

Of the two Silva’s Bernardo is the more efficient dribbler – completing 1.9 to David’s 1.4 last season – and the more consistent goal threat – he scored and set up 17 league goals to David’s 11.

Guardiola has no qualms of fielding youth. He gave regular opportunities to the likes of John Stones, Leroy Sané and Gabriel Jesus in 2016/17 when many expected them to need more time to adjust.

With that in mind, Bernardo Silva has a good chance of taking over from David Silva gradually, with a starting berth perhaps nailed down come 2018/19.

There have been stirrings of uncertainty regarding Agüero’s future at Manchester City of late. The Argentine has been linked with a move away, while at the same time Arsenal’s Alexis Sánchez is said to be a transfer target.

For the time being, the two aforementioned players remain where they were last season. But the former is set to face an almighty struggle to keep hold of his status.

Gabriel Jesus took to English football like a duck to water upon arriving in January. On just his second start, he scored and set up a goal apiece in a 4-0 away win over West Ham United in league action. Four days later he hit two in a win over Swansea City.

With his electric pace, astute link-up play and clinical finishing, the 20-year-old made his mark and began to challenge Agüero for the role of line-leader in Manchester City’s attack, which often featured just one out-and-out striker.

Assuming Guardiola’s preference for one up top continues, the rotation of his striking charges is a distinct possibility. However, the more experienced of the two players remains the primary contender for the spot.

Agüero averaged slightly more passes per game and had a higher pass completion rate than Jesus last season, while he also attempted far more shots, averaged over twice as many dribbles and was caught offside on fewer occasions.