The signing of Nemanja Matić made a lot of sense in the summer for Manchester United. They needed another high-quality central midfielder and he was one that had just won the Premier League and who had previously worked with Jose Mourinho.

However, despite a likely second place finish, the shine that United had at the start of the campaign with the arrivals of Matic and Romelu Lukaku has appeared to have worn off.

A combination of performances and the dominance of Manchester City have some United fans disappointed with their side’s season – but how has Matic stacked up to expectations?

A change of role

Matic has played a broadly similar but slightly more restrained role than in his last season at Chelsea.

This can be seen from the comparison of his Persona radars from the two seasons – which show what types of actions characterise a player’s game.

Proficient passing is still a heavy part of how he’s played, but his attacking involvement in terms of shots and chance creation have been a much smaller part of his game at United than in 2016/17 at Stamford Bridge.

There are other indications to how he’s generally moved deeper on the pitch. He’s making two more forward passes per 90 minutes while making two fewer going backwards and while his shot numbers are similar, his accuracy was far greater last term.

In 2016/17 Matic got 35 per cent of his efforts on target, but that rate’s fallen to just 16.6 per cent at Old Trafford, which indicates the quality of chances he’s taking is lower and more likely to be from distance.

Partly as a way to try to cope with Paul Pogba’s injury earlier in the season, as well as attempting to bring the best out of the Frenchman, United have switched between a two and a three man central midfield throughout the season.

Matic’s stats are remarkably similar for the period that Pogba was out between September and November compared to his season averages.

There were small changes to suggest he was generally playing further forward than over the course of the season as a whole, but United’s attackers were responsible for picking up the slack by and large. 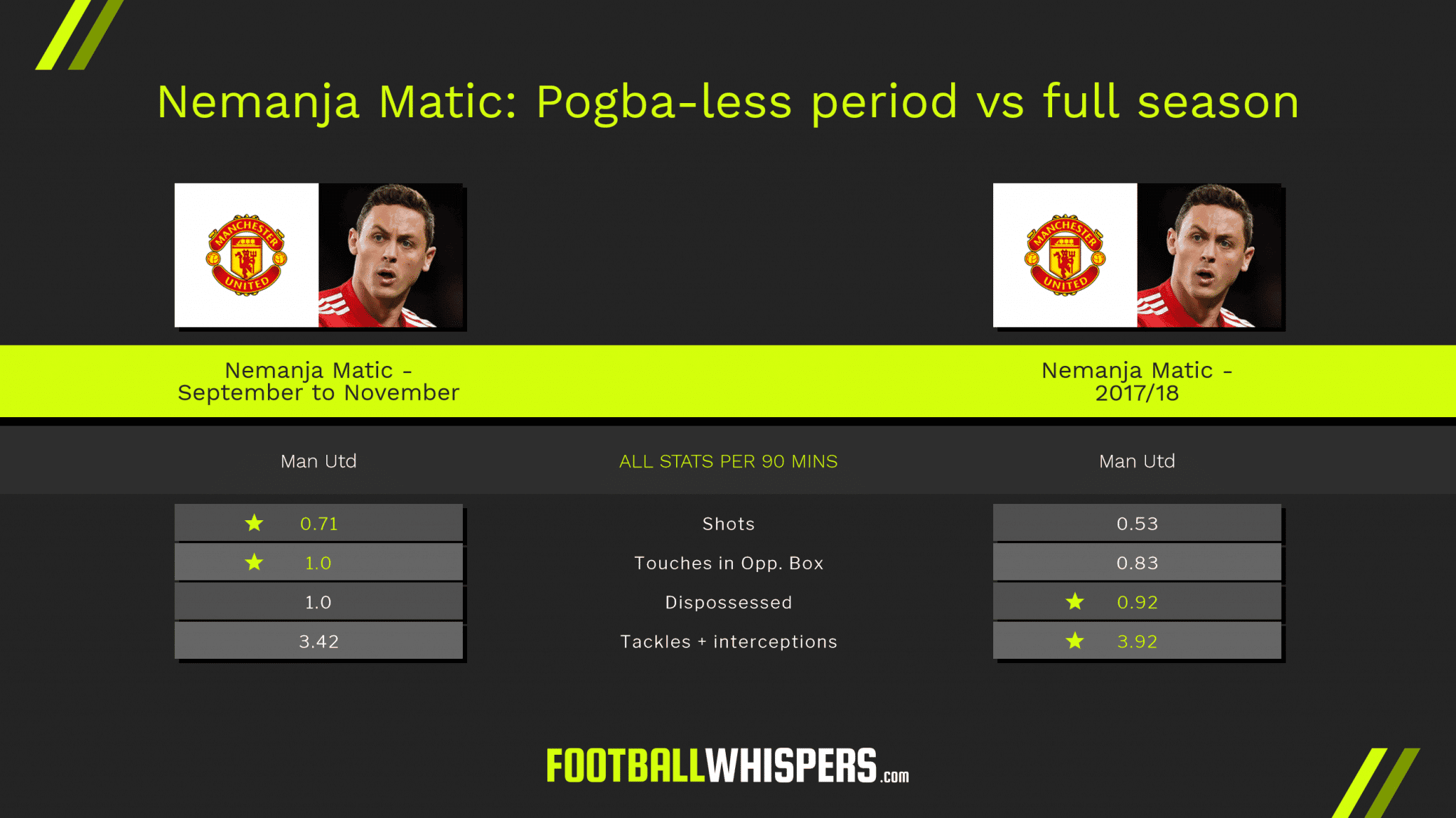 It’s only really been since the start of April that the trio of Matic, Pogba, and Ander Herrera have played together consistently in the centre of midfield. The triangle seemed like an obvious choice at the start of the campaign, but Herrera was side-lined as Mourinho attempted to play a middle two.

The trio, however, work well together. Matic’s defensive instincts, along with Herrera’s unbounded work-rate, are able to cover for Pogba’s creative freedom. The former Juventus star, with these two alongside him, is able to move forward into something between a traditional central midfielder and a No.10.

It’s not perfect, though. Matic is installed as the deepest point of the three for similar age-related reasons to why Michael Carrick has played so deeply for United in the past few years.

Though the sample size is particularly small, Matic’s stats for touches inside the opposition box and times dispossessed have fallen markedly since the start of April. This suggests he’s playing deeper and in safer areas of the pitch in possession. 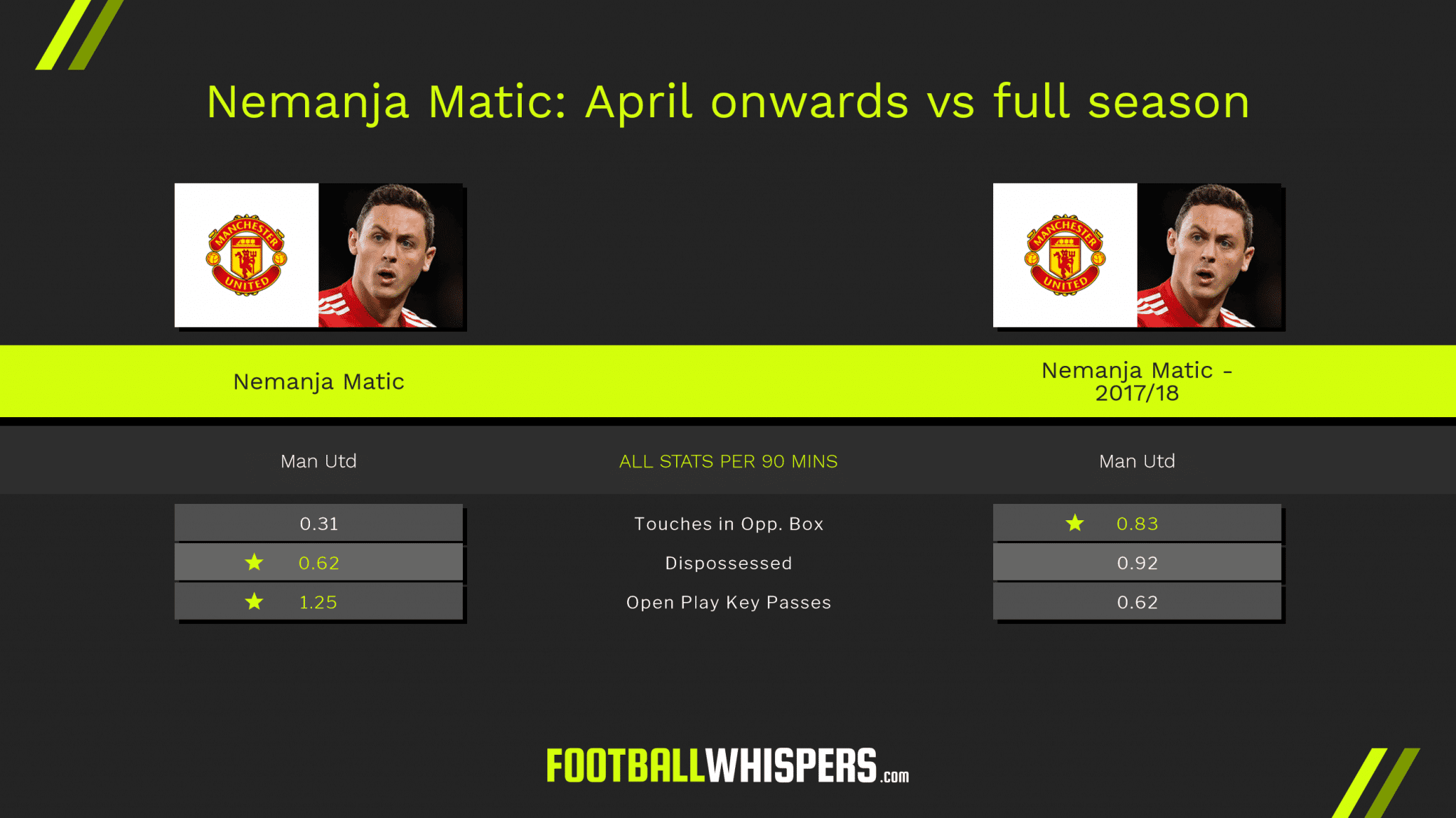 However, his key pass numbers for this period are double what they are for the season as a whole, and this is where the triangle runs into problems.

Matic is a more natural playmaker than Herrera but due to their respective ages and internal batteries it’s the Spaniard who is further up the pitch more often.

Tellingly Herrera has only 0.33 open play key passes for the same period.

Age was one of the only concerns when Matic joined United. Twenty-nine at the start of the season, he was always likely to be transitioning to the stage of his career where positioning is his biggest asset defensively rather than energy.

At times during the campaign, he’s looked as if the amount of playing time he’s had over the past few years has been catching up with him. This was particularly the case when only one person was partnering him in central midfield, and it will be interesting to see whether the Herrera-Matic-Pogba triangle persists to the end of the season and beyond.

United fans will undoubtedly be glad of the signing, especially considering that Carrick’s season has essentially been one of unofficial retirement. Like the team as a whole, it’s been a generally good season, but not one to celebrate.