Kelechi Iheanacho looks to be on his way out of Manchester City this summer.

Pep Guardiola’s summer of change is starting to really take shape at the Etihad.

After his side only finished fourth in his first year in charge, he’ll want to prove he’s the right man for the job and really put his stamp on the squad.

There have already been a number of departures, but it looks like Iheanacho could be another.

He’s thought to have a £25million asking price and he is on Southampton’s transfer wishlist, according to The Sun.

Behind the Lines | Henry Winter | FWTV by FootballWhispers

Why would Manchester City sell?

The Nigerian was one of the positives from Manuel Pellegrini’s final campaign in charge, scoring eight goals in 753 minutes in the Premier League.

He followed that up under Guardiola by scoring four goals in 528 minutes and added a further three assists.

To date, he’s been involved in a goal every 80.9 minutes when both league and European minutes are combined.

He’s an exciting talent who could be a bit of a wildcard.

But as hinted at above, his game time went down under the Spaniard, despite being the third-highest goalscorer, behind Sergio Agüero and Kevin de Bruyne, in the previous season.

While Pellegrini clearly saw him as potential first-team regular, Guardiola seemed to see him as a bit-part player.

And the January signing of Gabriel Jesus only pushed him further down the pecking order, behind the Brazilian and Agüero.

“I cannot pretend that I don't hear what people back home [in Nigeria] say about my lack of regular football but I will continue to fight,” Iheanacho told BBC Sport back in April.

“I don't worry about those comments. All I need to do is to keep working, keep doing well and keep improving every day.

“Aguero and Jesus are really really great players that we need in our team.

“As a young player, I'm happy playing alongside these fantastic players because I learn and get better every day.

“It's a big thing for my career to compete with these players. I'm okay with the way things are going.”

While they may sound like positive quotes, him saying he’s only ‘okay’, implies he’s not particularly happy still.

And while of course, he’s a quality player, anyone would find it hard to get into a team like Manchester City, let alone a youngster who needs to prove himself, so a move to an ambitious club slightly further down the table, like Southampton, makes sense. 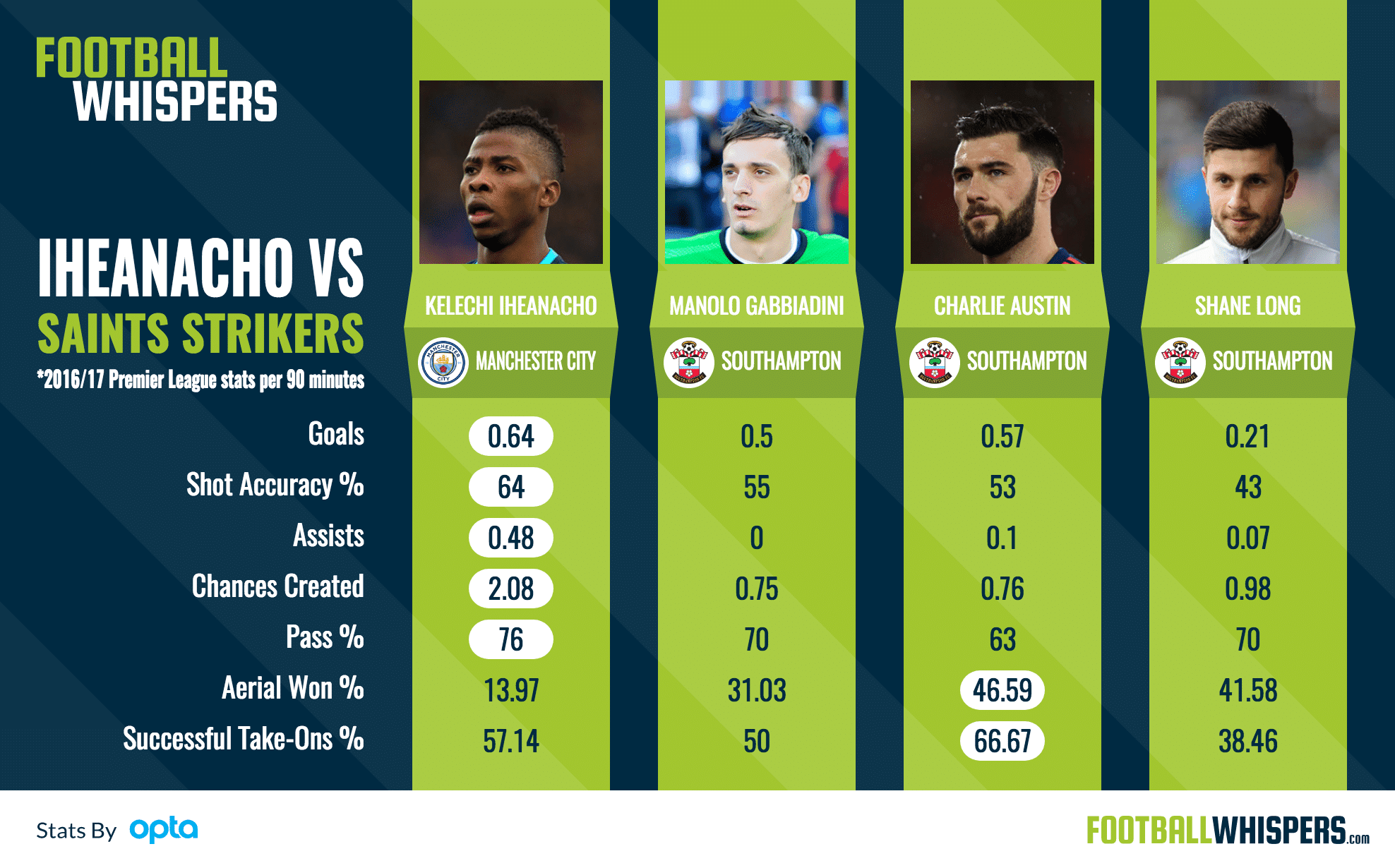 How does Iheanacho compare to Southampton’s options?

If you compare last season’s statistics of Ihenacho and Mauricio Pellegrino’s other striking options he will find himself with at Southampton, the Nigerian comes out very well indeed.

He also has the best shot accuracy out of the quartet, with 64 per cent.
The Englishman is on 53 per cent, the Italian on 55 per cent and the Irishman on 43 per cent.

The Manchester City striker also is out in front in terms of assists, averaging 0.48 per 90 minutes.

The Southampton trio are way behind him, with Austin averaging 0.1, Long on 0.07 and Gabbiadini on a big fat zero.

Perhaps unsurprisingly given he leads the way in terms of assists, Iheanacho also creates the most chances per 90 minutes – 2.08.

That is more than double his closest Southampton challenger, which is Long’s 0.98.

And Iheanacho is also better with his linkup play, averaging the highest pass accuracy out of the four of them – 76 per cent.

That’s ahead of Gabbiadini and Long (both 70 per cent) and Austin (63 per cent).

It’s fair to say if you want someone to head the ball, the Nigerian isn’t your man though.

He won just 13.97 per cent of his aerial duels in the 2016/17 Premier League season, way below the Southampton trio.

And the former Queens Park Rangers forward also led the way in terms of successful take-ons last season, with 66.67 per cent of his being completed.

And while Gabbiadini for £14million was clearly a bargain, you’re unlikely to get many more of them for that price given the way the transfer market is, albeit just one window later.

Iheanacho has been impressive at Manchester City, but he hasn’t really been given the game time.

If he continues his record per 90 minutes playing more regularly, he’ll be a very good striker indeed.

And that £25million invested in him could make him into a player of Chelsea transfer target for around £70million.

Iheanacho’s been mooted as part of a swap deal including Ryan Bertrand, but you rarely see moves of that ilk.

Southampton could very easily make a lot of money on the Nigerian if he fulfils his potential.

That is, if they would want to sell in a few seasons. With the Virgil van Dijk scenario, you can see perhaps Saints won’t be letting their best players go anymore.