Back in the summer of 2016, Mauricio Pochettino gave Son Heung-min an ultimatum: stay and fight for your place at Tottenham or return to Germany.

The South Korean missed the Bundesliga. It was understandable, having spent the best part of a decade there with Hamburg and Bayer Leverkusen. He considered it his home away from home.

And, like many before him, the winger had a difficult decision to make. Although part of him wanted to rise to the challenge of the Premier League and continue with an exciting Spurs side who that year ran Leicester City close for the title, an offer of regular first-team football in Germany was difficult to ignore.

But Son felt he had more to give the club who made him the most expensive Asian player of all time. With just 13 league starts, his first season in England had been frustrating, interrupted by injury and bouts of underwhelming form.

The feeling was that there was plenty more to come from Son. Accepting Pochettino's challenge, he rebuffed the offer from Germany and set about reinventing himself as one of Spurs' most consistent performers.

Two-and-a-half-years later, it's safe to say that not only has he regrouped after letting uncertainty creep into his mind that summer, but he has also blossomed into a wonderful player, one who has validated his manager's faith and cemented his place as one of the division's finest attacking talents.

His form has been particularly impressive of late. The 26-year-old has scored seven goals and added five assists in his last six games, form that produces mixed feelings for Spurs fans.

While Son is bursting with confidence ahead of the Carabao Cup semi-final with Chelsea on Tuesday night before the visit of Ole Gunnar Solskjær's rejuvenated Manchester United to Wembley on Sunday, his momentum will inevitably be halted by international commitments, as he is set to join South Korea for their Asian Cup campaign at the start of next week.

Son missed his country's first game – a 1-0 win over the Philippines on Monday – after a deal was struck allowing him to stay with Spurs for as long as possible.

The Football Whispers Lab illustrates Son's change over the last month. For most of 2018, much of his player persona leaned heavily on dribbling and chance creation, hardly surprising for someone who primarily operates as one of the three behind Harry Kane in Poch's 4-2-3-1.

However, since December 5, Son has undergone a dramatic transformation into a deadly goalscorer, as depicted below.

Between January and December 2018, Son was averaging 2.5 successful take-ons per 90 but that has dropped significantly over the last month.

While he is now managing just 1.05, his game has developed in other areas, the most notable of which being expected goals.

Son's surging form has not been the product of some seismic tactical shift. Instead, he is profiting from often being the one from the trio operating behind Kane to sense a goalscoring chance, break into the box and finish with aplomb.

Christian Eriksen is known more for his ability to open up defences from further back and, while Dele Alli certainly possesses some centre-forward qualities – darting to the far post to score headers has become an unlikely trademark of his – Son has executed it to devastating effect recently.

Take his goal against Southampton – the game which started this purple patch – as an example. Spurs win the ball high up the pitch and it falls to Kane, who has drifted to the edge of the penalty area to pick up possession. 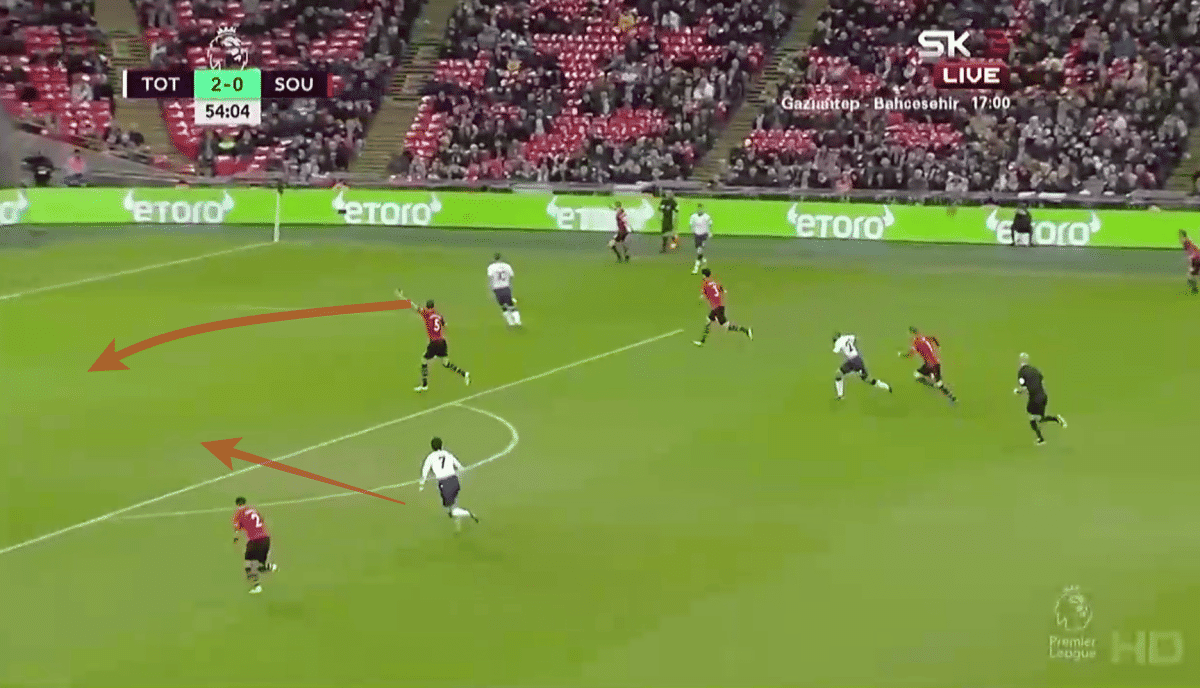 Son immediately sees the space between the two Saints defenders and looks to do what Kane would do if their roles were reversed: dart through the middle and give his teammate a crossing option. 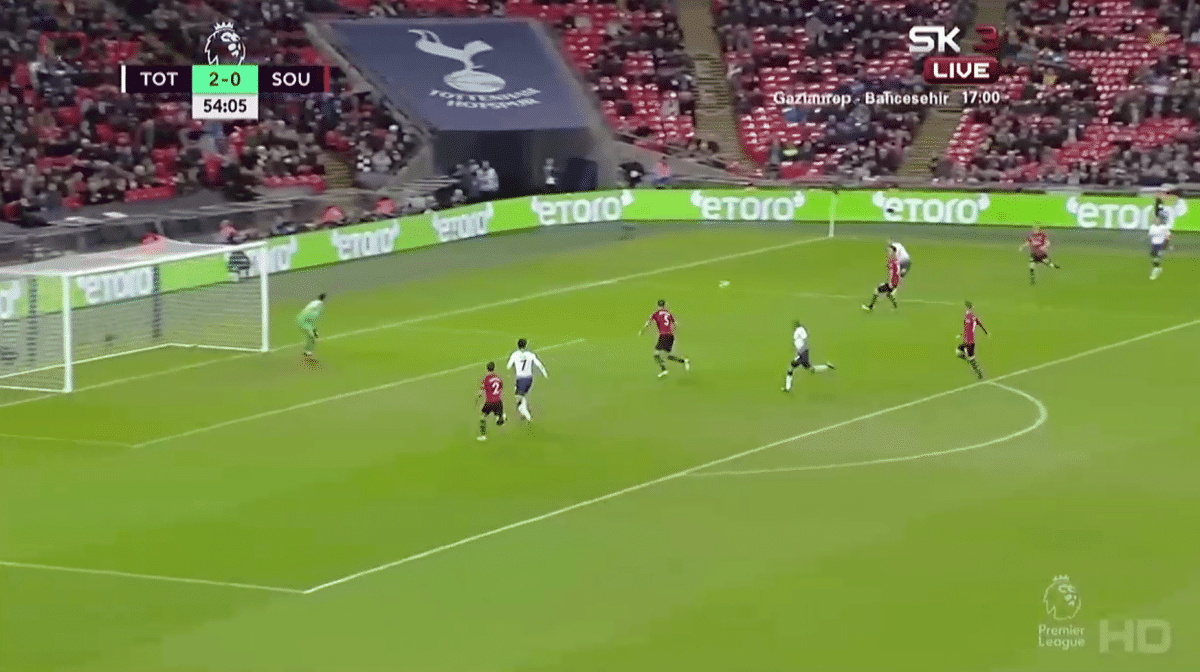 And this was certainly not an isolated incident. In the Carabao Cup victory over Arsenal at the Emirates, the South Korean deputised for Kane in the central attacking role.

It paid dividends, too, as he broke beyond the Gunners back-line to open the scoring en route to a 2-0 win. 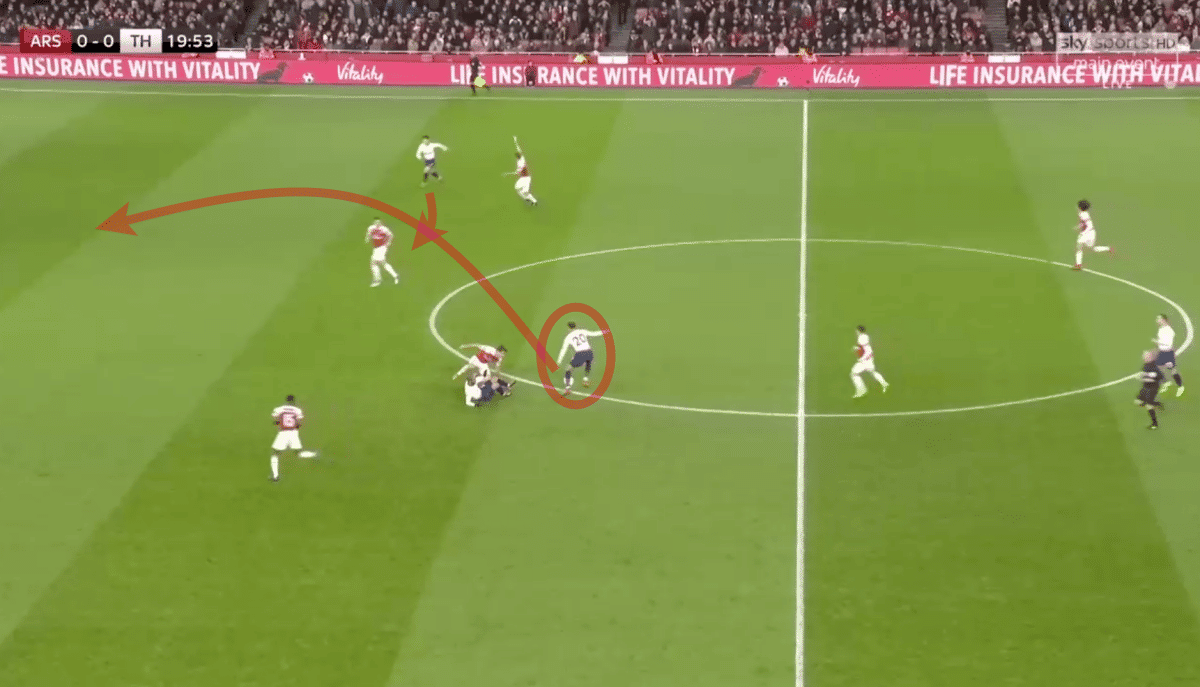 Son's immediate reaction to Alli winning the ball in midfield is to provide an outlet. He bends his run to stay onside before setting off in behind makeshift centre-back Granit Xhaka. 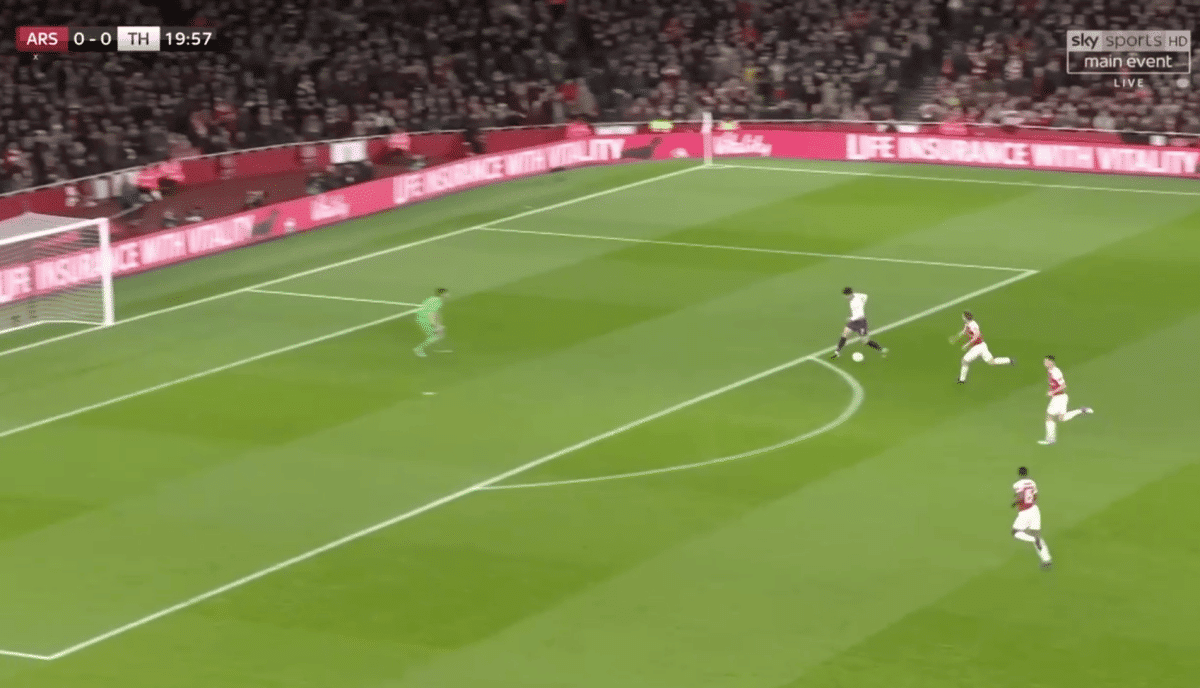 Having helped create the chance, he has the touch, composure and confidence in his finishing to stare down Petr Čech before sweeping an excellent shot beyond the keeper and into the far corner.

Son followed that strike against Arsenal with successive doubles; in the 6-2 demolition of Everton and the 5-0 win over Bournemouth. Like several of his teammates, he didn't enjoy his finest hour in the 3-1 defeat to Wolves but still managed to notch an assist for Kane and has responded with two goals and three assists in the two games since.

On occasion, he has been Spurs' most-advanced player, someone willing to go beyond Kane and establish the closest thing resembling a partnership with the forward. It has certainly worked recently and Son's upcoming absence will be sorely felt by Kane and the rest of the squad.

Of course, Pochettino knows what it's like to lose him. He missed the first month of the season for the Asian Games. Now it's the Asian Cup and the Argentine can only hope Son can pick up where he left off once he returns.