The World Cup is over, another star is shining brightly over France, and England’s boys are coming home.

After the highs of reaching the semi-final and the very ‘morning after’ feel of the third-place play-off, it’s now time to look at the Three Lions’ World Cup in the cold light of day.

Autopsy? Not this time: Gareth Southgate got the team looking lively, for a change.

Diagnosis, then, but it’ll be a complicated one.

In the first two matches, England performed well. An 8-2 aggregate score and a new-found sophistication on set-pieces looked good, and the underlying numbers were healthy as well.

A +1.4 expected goals difference per game jumps to +2.3 when taking into account shot placement. It makes sense to do this when looking at England’s numbers, as normal expected goals models are likely to underrate the set-piece chances England created.

The third group game, against Belgium, shouldn’t be paid much notice of, for obvious reasons, so we then come to the knock-out matches.

England’s expected goal difference got worse with each passing match, on Football Whispers’ model. +0.69 against Colombia, +0.07 against Sweden, and then -1.33 against Croatia. 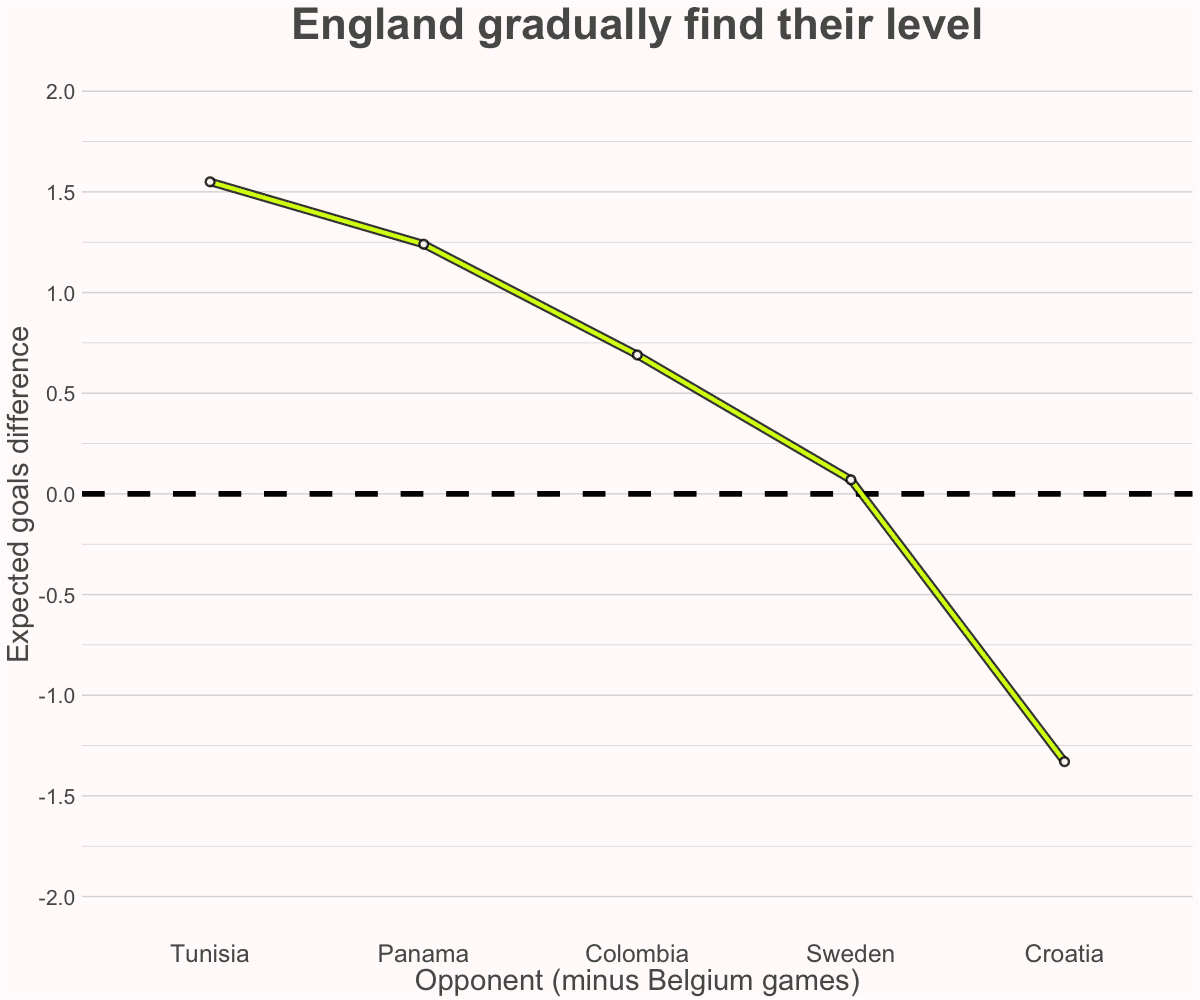 It had been feared, as the tournament went on, that we didn’t know how good England were because Southgate’s side hadn’t played any good teams. Those concerns were justified.

On average, in those three games, England averaged a -0.2 expected goals difference per match, but this gets much worse when taking shot placement into account: -1.3.

The disparity between England’s chance creation from set-pieces and open-play has been widely noted. Nine of their 12 goals came from set-pieces, and right-back Kieran Trippier was the side’s biggest creator from general play.

That Dele Alli and Jesse Lingard set-up just 1.01 expected goals worth of chances all tournament shows the state England were in. In fact, Lingard profiled as something closer to a striker during the tournament.

The Manchester United man racked up 1.48 expected goals worth of chances but assisted only 0.47, meaning that over 75 percent of his expected goals contribution came from his own shots. Lingard and Alli’s role was described as some as being a ‘free eight’ – a central midfielder allowed to roam around the pitch in attack – but really they were closer to number tens. Less 3-5-2 than 3-3-0-3-1.

One thing that England have going for them, though, is youth.

The average of England’s starting XI was 25.7 (or around 25 and eight months). Happily, the older members of the side are some of the most-easily expendable.

Ashley Young, aged 33, is an obvious area that can be improved. Replacing the team’s two 28-year-olds, Kyle Walker and Jordan Henderson, is unlikely to cause much upheaval either.

Trippier, after the tournament he’s had, might feel put out by suggestions he can be upgraded, but given that he’s 27 it’s not inconceivable that come 2022 or even 2020 there could be another man in the right-back slot.

But the rest are all 25 or under – they still have another World Cup in their peak years in them. Raheem Sterling, at 23, might even have two, if he manages his body well enough.

And with England challenging for silverware in seemingly all of the men’s age group competitions, there’s plenty of talent who could be challenging for squad, or starting, places within a few years.

So, with that in mind, even England’s slightly disappointing knock-out statistics are a reason for optimism.

The worst, the very worst, that you can say about Southgate’s side was that they were ‘only' worthy quarter-finalists; that’s the point at which the stats suggest England found their level. In a cup competition, you might only need to be at that level to win it.

England haven’t been worthy quarter-finalists in well over a decade. And all the signs are pointing to the Three Lions being even better next time around.