Indeed, when he left, it was a surprise, as he’d arguably been Los Blancos’ best player in the previous campaign.

The Argentine was in fact named UEFA man of the match after the 4-1 2014 Champions League final win over Atlético Madrid.

He did not score in the game, but it was when he dribbled past three players which produced a save from Thibaut Courtois and from that, Gareth Bale scored the rebound to give Madrid a crucial 2-1 lead.

The fee is still big by today’s standards, but the market was definitely less inflated then, so it was massive – it was the largest fee paid by a British club at the time.

His time at Old Trafford was undoubtedly disappointing and he left after just one season, joining Paris Saint-Germain.

And reports suggest he could be on the move again, with the 29-year-old the subject of Real Madrid transfer rumours.

He's been linked with a sensational return to the Santiago Bernabéu to replace James Rodríguez, whose time in the Spanish capital looks to be up.

How does he compare to James Rodríguez? 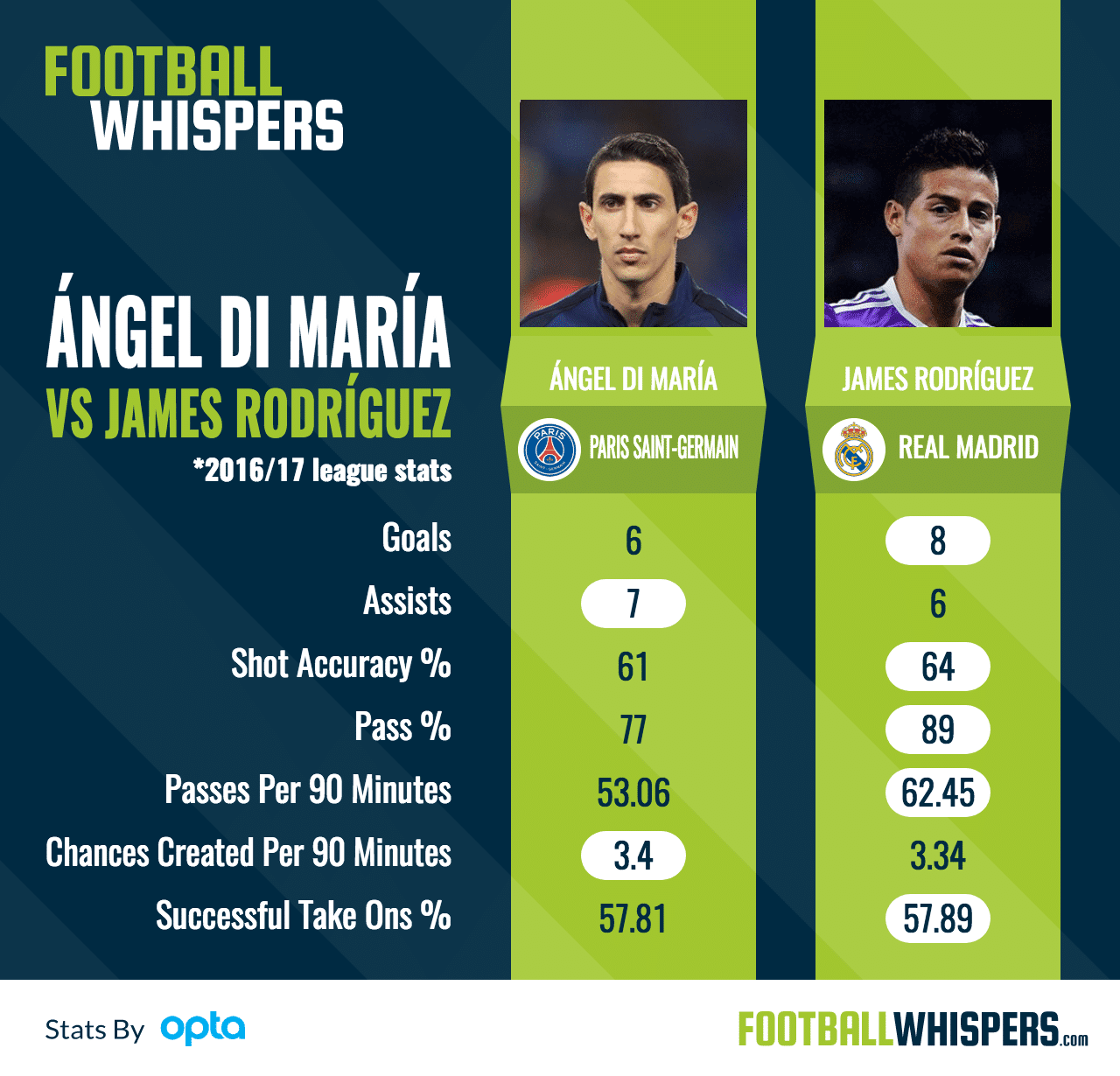 We’ve had a look at the league statistics from the 2016/17 seasons, comparing the Argentine to the Colombian.

James played considerably less game time in the league than Di María – 22 matches compared to 29, at a total of just 1186 minutes, compared to 2039.

But despite that, the Real Madrid man was directly involved in more league goals.

The 25-year-old was involved in 14 – scoring eight and assisting six – while the PSG star was directly involved in 13 goals – netting six and creating seven more.

He also had a slightly better shot accuracy – 64 per cent to 61 per cent.

In terms of successful take ons, the Colombian also comes out on top – but only just.

He completed 57.89 per cent of his take ons in the league, while di María was only just behind him with 57.81 per cent – there isn’t much in it at all.

And there also isn’t much in between the duo in terms of chances created per 90 minutes.

Do Real Madrid need him?

If James does leave, of course you would expect Real Madrid to replace him.

But you have to take into consideration that he hasn’t been a guaranteed starter or anywhere near a regular this season.

As we mentioned above, the Colombian made 22 league appearances in LaLiga in 2016/17, starting just 13 games.

That’s nowhere near the amount of games you would expect from someone who cost approximately €80million when he arrived the same summer that Di María departed the Spanish capital.

And arguably he hasn’t had anywhere near the same impact as the Argentine did in Madrid.

So perhaps nostalgia could play a role, but you have to consider that the former Benfica attacker was a first-team player whereas James simply is not anymore.

And given the Colombian is behind Isco if Real Madrid play a 4-4-2, and there are a number of players in both the midfield and attacking three if they play a 4-3-3 who are ahead of him, perhaps they don’t need to replace him with such a big name.

Instead, they could give Isco more time on the pitch, or perhaps even Marco Asensio or Mateo Kovačić too.

And Di María also hasn’t played at all in the middle of the pitch this season, where James has started the majority of his games.

Of course, if the former Manchester United man was available, you would understand them moving for him.

But Zinédine Zidane seems to have done a great job keeping all the egos under control for one season, but bringing another big name in without guaranteed first team football is a massive risk.

“He's the kind of player that can take you to the next stage. That's what they need to go further in the Champions League,” he said back in July 2015.

“Di María can contribute his energy, the difference he makes when he accelerates, he has the quality to do something.”

And he wouldn’t come cheap of course, being one of PSG’s biggest names, and at 29 years old, it may not be worth splashing out the amount of money the French side would want when it could stop the likes of Asensio, Kovačić or even Lucas Vázquez having a role in the squad that their performances this season arguably deserve.