Stoke City won't be in the Premier League season but Xherdan Shaqiri by all accounts will be. The Switzerland international was a standout for the Potters this season but his penchant for spectacular goals was not enough to keep the club in the top-flight.

It's quite clear, though, Shaqiri deserves to be with a Premier League club and it is almost certain he will leave the bet365 Stadium in the coming weeks as the player would ideally like to sort out his future before the World Cup starts on June 14.

Shaqiri won't be short of suitors. Having scored eight goals and notched seven assists for Stoke this season, the 26-year-old is clearly playing some of the best football of his life and there are a clutch of Premier League clubs eager to snap him up just as he reaches his peak.

Recent reports have suggested that his release clause is £12million. If he leaves for that price, it could turn out to be one of the summer's biggest bargains.

Let's have a look at where Shaqiri could end up.

According to The Sun, the Toffees are very much interested in acquiring Shaqiri's services. The club is currently in a state of upheaval, however, following the departures of Sam Allardyce and Steve Walsh as manager and head of recruitment respectively.

Everton are particularly keen to tighten the purse strings after a substantial outlay last summer, so their interest in Shaqiri certainly adds up. However, given the uncertainty over the direction in which the club is heading, Goodison Park may not be the most attractive option for Shaqiri.

If he did arrive on Merseyside, though, Shaqiri could be the creative dynamo Everton thought they were getting in Davy Klaassen.

Last week, West Ham emerged as the surprise bookies' favourites to sign Shaqiri. Like Everton, the Hammers are currently managerless after David Moyes' short-term contract was not renewed this week.

Rumours are swirling over the identity of Moyes' successor but fans would certainly be more excited at the prospect of seeing the winger line up alongside Manuel Lanzini and Marko Arnautović, with whom Shaqiri combined so beautifully at Stoke.

Shaqiri's craft naturally compliments Arnautović's movement and finishing and with seven assists to his name and an average of 1.21 open play key passes per 90, the former could rekindle his partnership with the latter to great effect at the London Stadium. 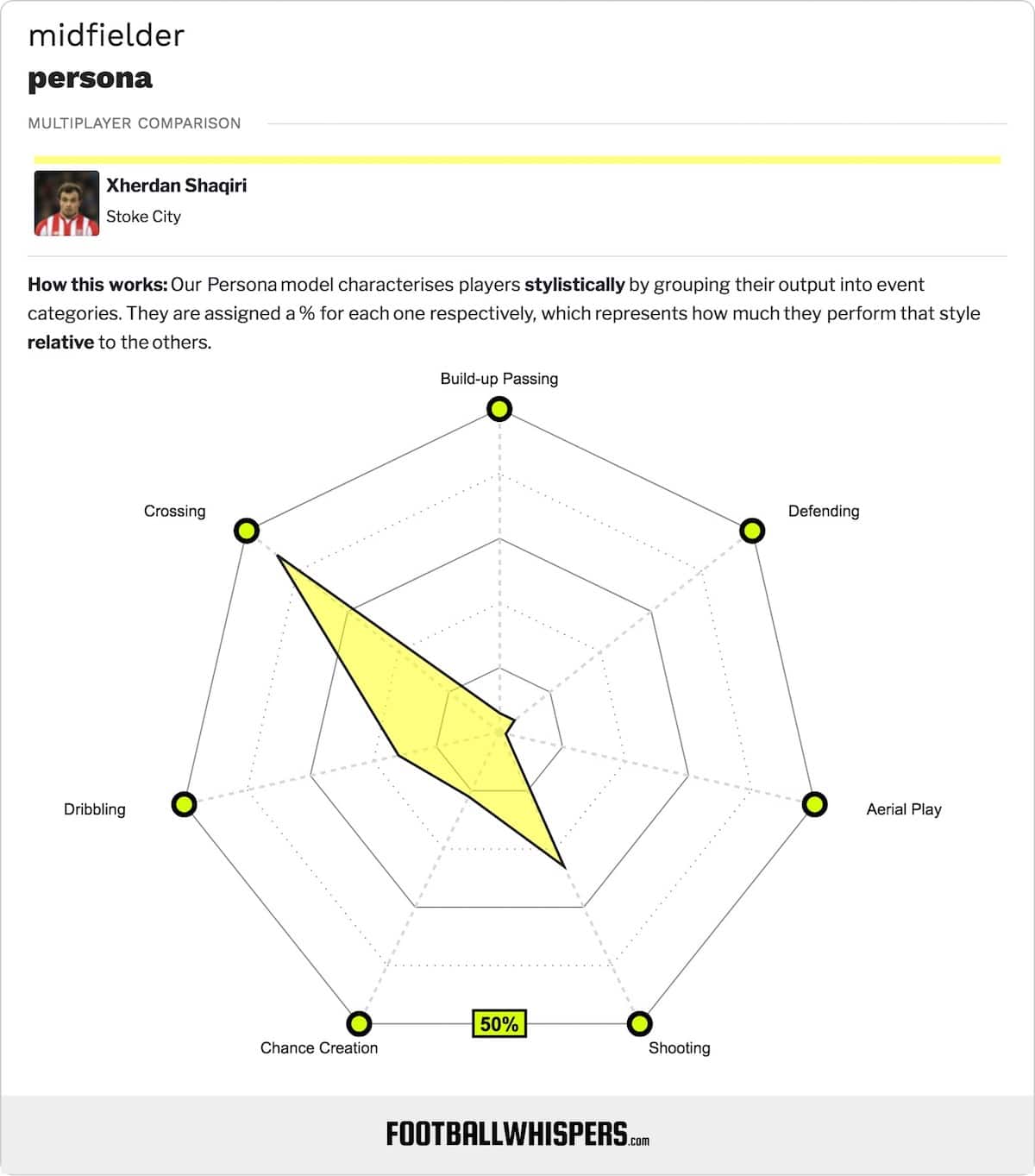 Shaqiri's desire is to play Champions League football. To some, that may seem overly ambitious for a player who has just been relegated, but it's certainly not beyond the realms of possibility.

Spurs are believed to be one of the clubs fronting the queue to sign Shaqiri and, considering that they can fulfil his demands and the chance to be part of an impressive squad under one of football's foremost tactical brains, it's safe to say they may have the edge.

Mark Hughes pulled off a transfer coup when he signed Shaqiri from Inter Milan for a club-record £12million in the summer of 2015.

Explosive, dynamic and full of trickery, Shaqiri added a new dimension to the Potters' attack after arriving and it's understandable that Hughes would want a similar injection of fresh ideas into his Southampton attack.

Hughes is currently in negotiations to extend his deal at St Mary's having guided the Saints away from relegation after taking over in March. Should he be confirmed as Mauricio Pellegrino's permanent successor, it seems realistic that he will raid his former club for Shaqiri.

However, with another fight to avoid relegation very much a possibility for Southampton next season, Shaqiri may be holding out for a more lucrative move which aligns with his European ambitions.