Premier League clubs have never been shy when it comes to changing their manager. What used to be a five-year plan is now a three-year plan, and it won't be long before this decreases once again.

Football has always been a results-based industry but, even then, when there's been success, there's no guarantee for managers that they'll last the length of their contract. Because when you're successful as a manager there's the added pressure of having to play football the right way.

Managers start off on borrowed time and they're only a run of bad results away from their P45 appearing in the post and becoming a feature on Sky Sports News.

Over the last decade, the average number of managerial changes per season has been nine, up from an average of six for the previous ten years before that. During the 2017/18 campaign, so far, we've seen eight clubs change who is keeping the hot seat warm. However, there are still nine games to play and managers are under pressure with the threat of relegation still looming.

But does a change always result in a positive upturn in form once that new manager bounce wears off? Here, at Football Whispers, we've taken a look at how each of the new bosses have fared this season, ranking them by points per game and comparing their scores to their predecessors. 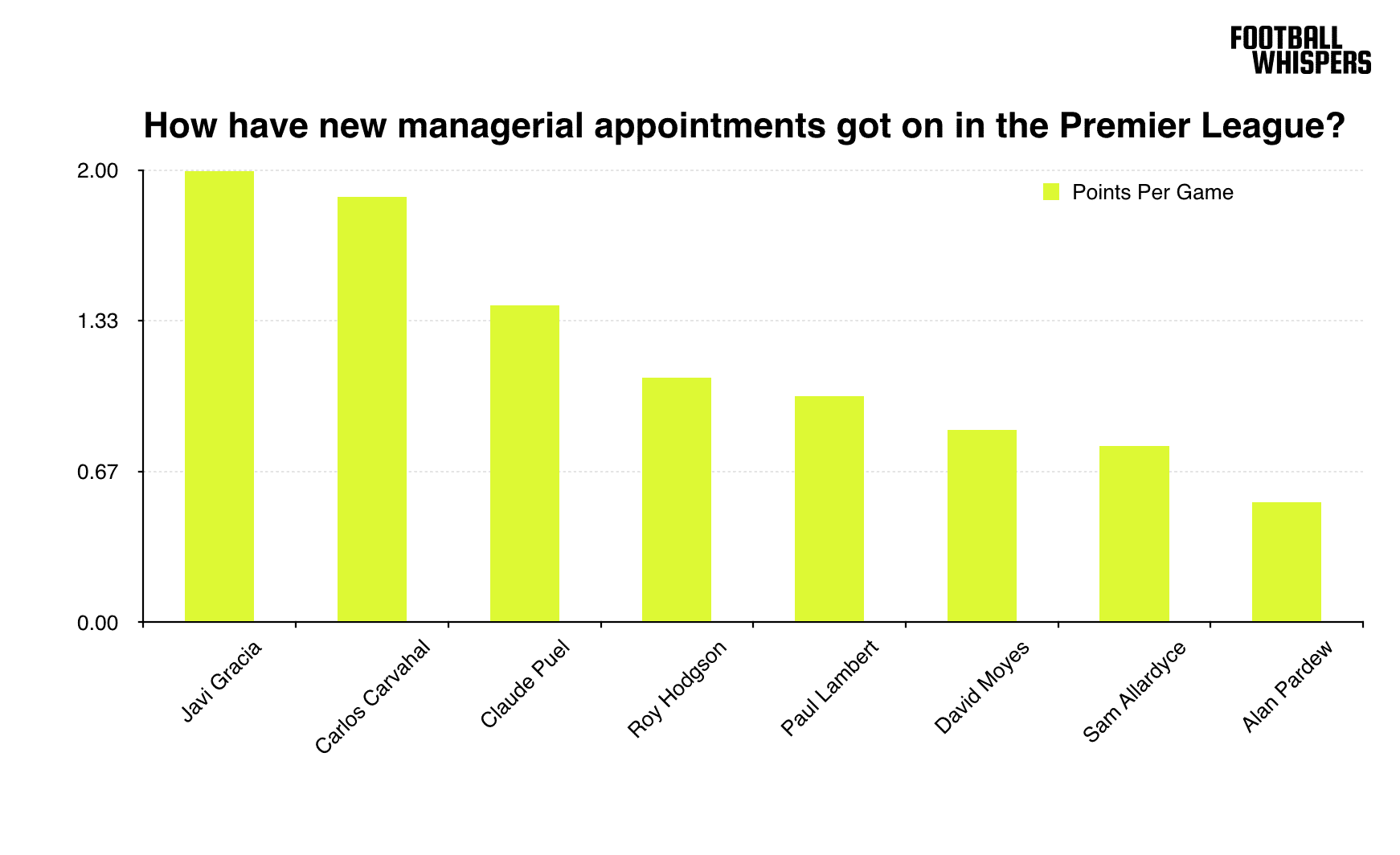 Before the arrival of Gracia, it appeared as though Watford would get dragged into a relegation battle. Under Marco Silva, the Hornets couldn't defend and the good start they had to the season was the only thing enabling them to tread water.

Before the former Rubin Kazan manager made the move to Vicarage Road, Watford averaged 1.08 points per game and were conceding 1.76 goals per game. In the five outings in the Premier League since his appointment, however, they've seen their average number of points per game rise to two, while their goals against per 90 minutes has dropped to 0.6.

It's been quite the turnaround. For even more context, if Gracia were able to maintain this form over a 38-game season, the Hornets would finish with 76 points, having conceded just 22 goals.

Yes, the sample size is small and you shouldn't read too much into it just yet, but Gracia has already had a huge impact at Watford, proving that the club were right to sack Silva.

Swansea City looked dead and buried as 2017 edged closer to 2018. When Carvalhal was appointed on December 28, the Swans had just lost 5-0 to a rampant Liverpool side on Boxing day. They had picked up just 13 points in their previous 20 matches and the Championship looked to be on the agenda for next season.

Since the arrival of the former Sheffield Wednesday boss, however, Swansea have climbed to 13th in the Premier League table, three points clear of the relegation zone. He's guided them to 17 points in those nine matches, at a rate of 1.88 per game – up from 0.65 under Paul Clement and Leon Britton.

In this time Carvalhal has overseen victories over Liverpool and Arsenal, as well as picking up vital wins against Watford, West Ham United and Burnley. And Swansea have scored more goals in the nine games under Carvalhal than they did in the 20 before his appointment.

Many raised an eyebrow at the appointment after the Frenchman failed, according to those in the media, to impress while on the South Coast.

But the club's gamble has paid off. Leicester are battling it out for a seventh placed finish in the Premier League and have picked up 1.4 points per game since Puel's arrival, 0.4 better than Shakespeare's average before he was dismissed.

The Frank de Boer experiment at Crystal Palace didn't last long. The former Ajax manager was given just four matches before the Eagles called time on him after he failed to pick up a single point.

Roy Hodgson was tasked with keeping the club in the top flight and, to his credit, he got off to a good start. However, their form has petered out and Palace once again look in danger of dropping out of the Premier League.

The defeat to Manchester United means Hodgson's Palace side are averaging 1.08 points per game. It's better than what de Boer could post but, at the same time, Hodgson's average at Selhurst Park over the entirety of a season totals 41 points, which could still see them in a relegation battle.

Though Palace have improved under him, they would still be in a similar predicament, using his average now, to where they find themselves currently had he been in charge from the off.

Lambert only replaced Mark Hughes on January 15, meaning he's been at the helm for just seven matches. As with Gracia, the sample size is small and you shouldn't really read too much into it.

Having said that, though, the change at bet365 Stadium is evident. They're now harder to beat, having lost just two of their seven matches, and Lambert is averaging one point per game. An increase on the 0.68 Stoke City averaged in the 22 matches prior to his arrival.

It's still relegation form over the season but it's unfair to judge Lambert on these results just yet. What you can judge the manager on is the turnaround in defence. The team are now averaging just one goal conceded per game, as opposed to 2.1 under Hughes. 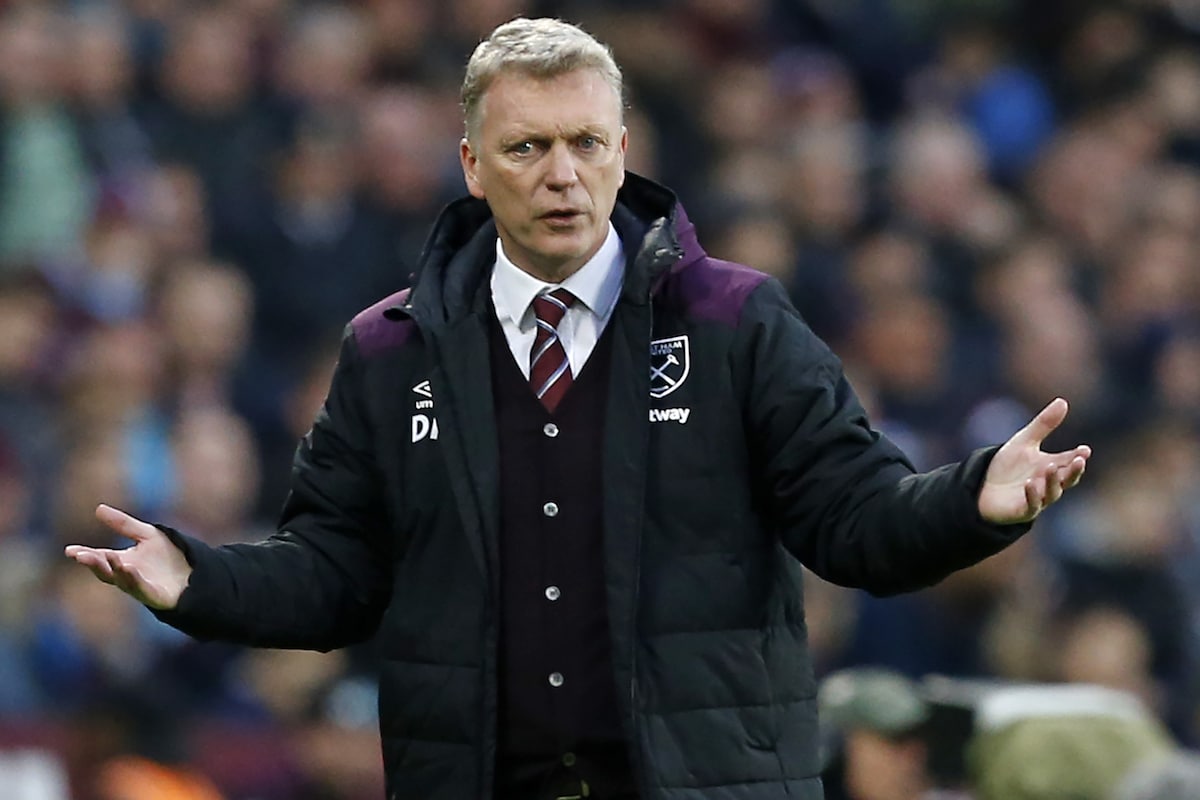 West Ham United waited until November to dismiss Slaven Bilić. It was a long time coming after a horror show during the 2016/17 campaign. They turned to David Moyes as his replacement and it appeared as though the Scot was getting their season back on track.

They are in 14th position in the Premier League, three points clear of Crystal Palace in 18th with a better goal difference.

However, the difference between Moyes and Bilić isn't as great as some might have imagined. The former Manchester United boss is averaging 0.85 points per game, up from 0.81 prior to his arrival.

It's still relegation form under Moyes. Using his current rate over 38 matches, they come up eight points short of the magic 40 mark.

Allardyce wasn't worth the wait. Everton held off on appointing a successor to Ronald Koeman for quite some time and even broke negotiations off with the former England manager before returning with improved terms.

Life on Merseyside started well for Allardyce. They went six games unbeaten including picking up a point at Anfield, something not many Everton managers have achieved over recent seasons. They climbed up the table and looked to be well clear of relegation but since the turn of the year they've picked up just seven points from a possible 24 and are nervously looking over their shoulder.

What's more worrying is the fact their points per game tally has dropped since Allardyce's appointment. His average is 0.78, quite the drop-off from the 1.07 it was at before the Toffees confirmed him as their next manager. Had it not been for that spell during the honeymoon period they would be in serious trouble right now.

Under Tony Pulis, West Bromwich Albion were stuck in a rut and his dismissal in November was an early Christmas present to fans. Alan Pardew arrived at the Hawthorns and was supposed to just guide them to safety.

Yet, with the exception of a good performance in the FA Cup, Pardew has been worse than Pulis. He's picking up fewer points per game: 0.53 compared to the 0.85 under Pulis and caretaker manager Gary Megson.

The Baggies are seven points adrift at the bottom of the league and have won just one of Pardew's 15 Premier League matches in charge, losing nine of those. Furthermore, they've kept just three clean sheets – the same amount Pulis managed before he was sacked.

The change did more harm than good. Sometimes it's better the devil you know.