Over time, as Arsène Wenger mulls over what went wrong for him at Arsenal, he might think about Pierre-Emerick Aubameyang. The Gabon striker was Wenger’s final big signing as Gunners boss, making the move from Borussia Dortmund to North London in the January window. The French boss won’t rue this transfer, far from it, but he might regret not making it sooner.

Indeed, Aubameyang has been a success at the Emirates since joining Arsenal, scoring 10 goals in 13 Premier League appearances. With that rate (0.82 goals per 90 minutes) extrapolated over the course of the whole campaign, he would have rivalled Mohamed Salah and Harry Kane at the top of the division’s scoring charts.

Of course, it’s perhaps something of a leap to suggest the former Borussia Dortmund strker would have changed the course of Arsenal’s season, that he could have saved Wenger’s job, but there’s no doubting the impact he has made in the Premier League. Next season he could truly come into his own, leading the Gunners through what will inevitably be a tough transition in the post-Wenger age.

He has shown enough in his first few months in England to suggest that he is the player the new manager must build around. Arsenal have struggled for world class players in recent years but in he 28-year-old they have en elite chance-getter. Something very few teams in the world can claim to possess.

It could be that Aubameyang has performed above expectations over the course of his first few months at his new club. He has averaged 2.63 shots on goal per 90, making him one of the most clinical strikers in the Premier League. For context, Kane averaged five shots with Salah firing off four per 90.

Expected Goals suggests that it might be difficult for Aubemeyang to keep up such an astonishing scoring rate next season, with his xG value per 90 minutes standing at 0.54. However, when looking at Post-shot xG (0.65), a stat which analyses where the efforts land on the target, it's clear the forward is adding value to his efforts and is why he's likely to repeat his goalscoring exploits next season.

The former Dortmund man be used as a poacher, but when the shackles are thrown off him Aubameyang is best when he is allowed to make runs in behind, with only 70.6 per cent of his total touches in an Arsenal shirt so far coming inside the opposition penalty box. Contrast that to Lacazette, who has made 96.5 per cent of his touches this season in the opposition penalty box. Wenger deserves credit for recognising quickly where the Gabonese speedster could be best utilised in his side. 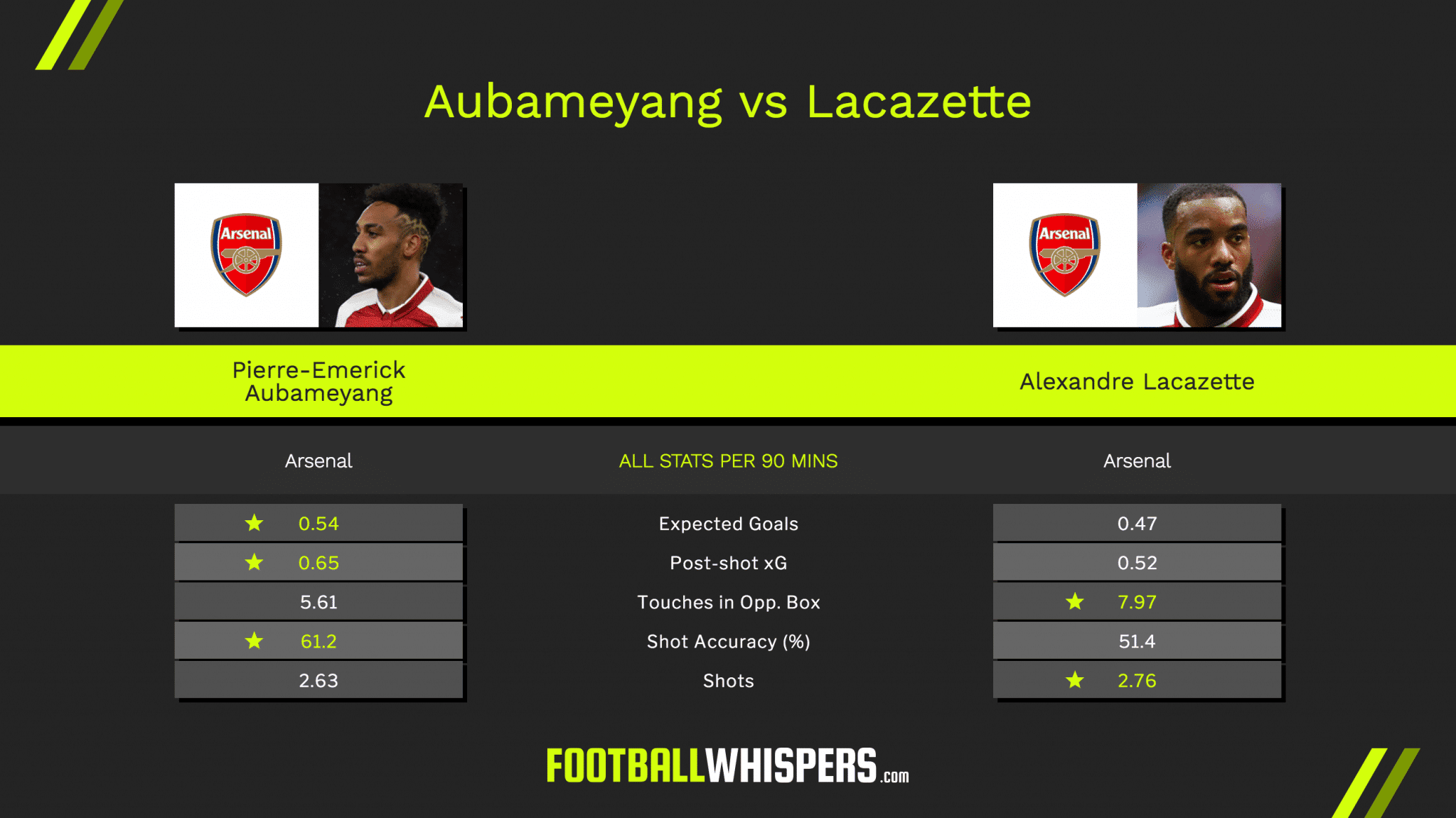 It’s possible that whoever comes in to succeed Wenger at Arsenal this summer could use the pair as a partnership. Aubameyang could either be used on the wing, or he could partner Lacazette in a more orthodox front two. Tactics are cynically and front twos are back in vogue. Look at how Atletico Madrid swept to the Europa League title with Diego Costa and Antoine Griezmann up front. A similar model could work for Arsenal.

Aubameyang provides a throwback to the peak Arsenal years under Wenger. Comparisons have been drawn with Thierry Henry and there might be something in that. As a centre forward, Aubameyang is more of a penalty box operator than the great Frenchman ever was, but just like Henry he is capable of playing in wide areas, running the channels from the flanks, as Wenger has deployed him at times. Parallels can be drawn, with Wenger himself doing just that.

But most importantly, Aubemeyang brings an energy to the Arsenal frontline that has been lacking for some time. Not since Robin Van Persie graced the pristine Emirates turf have the Gunners boasted such a mobile frontman. Olivier Giroud came in for some unwarranted criticism during his time at the club, but he was a static frontman. The same could be said of Lacazette. Aubameyang is a different sort of player. He has more to his skill set.

Goals are the currency Aubameyang deals in, also netting 13 times in 16 Bundesliga appearances before leaving Dortmund in January. This is what Arsenal bought him for and what they will expect from him. But his signing has opened up new tactical possibilities for the Gunners. Wenger’s successor, whoever it may turn out to be, has been given a Swiss Army knife of a player to work with. Aubemeyang’s end of season form might be unsustainable in the long run, but he embodies where Arsenal are trying to get to.