Amine Harit’s name isn’t even widely recognised in France yet, but reports have recently linked him with a move to Liverpool. Now, after scouting him in Nantes fixture against Lorient, Arsenal are rumoured to have made him a summer transfer target.

As has become all too common an occurrence in France, this is the 19-year-old’s first season in the top flight, but now the Parisian is heavily linked with a move to England.

Born in Pontoise, a Parisian suburb, to Moroccan parents, young Harit moved between a number of clubs during the early part of his career, he even had a one-year spell with Paris Saint-Germain in 2006.

It was while he was training with Red Star in the French capital that he gave up swimming and started to fully concentrate on playing football and things finally began to take shape for the young midfielder.

Who is Amine Harit? 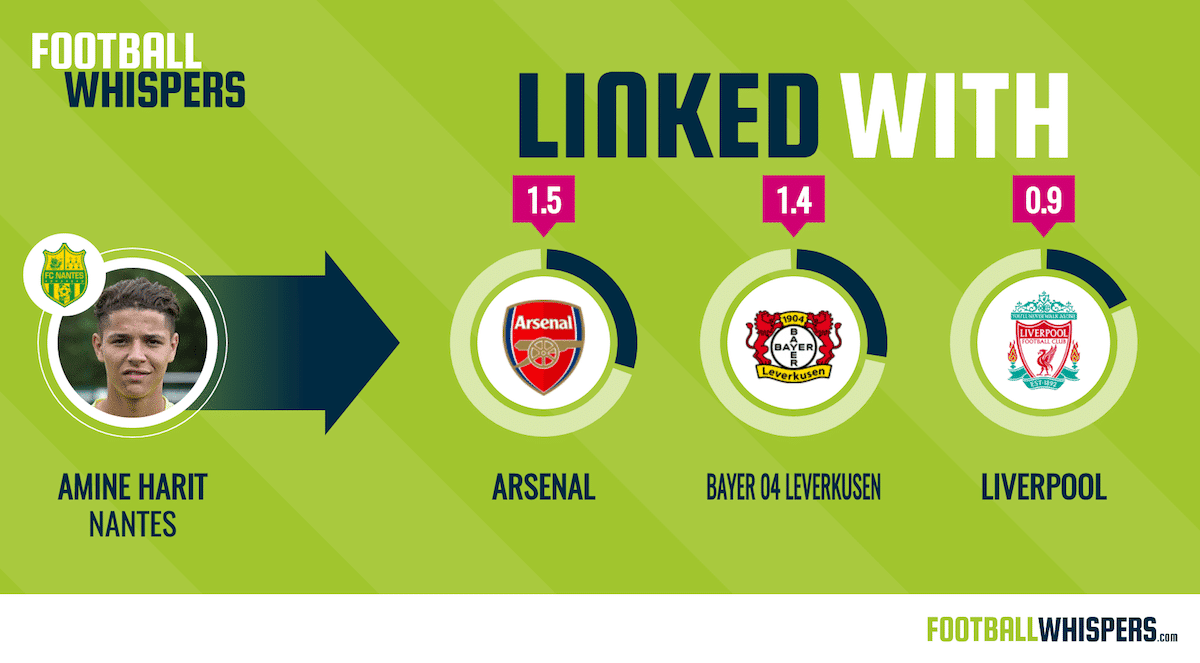 Nantes spotted his potential and snapped him up to their training centre in 2012. Jumping up through the Under-17 and Under-19 sides, he was promoted to the CFA side – the reserve team that played in the fourth division – for the 2015/16 campaign.

That rise didn’t go unnoticed and Harit became a regular at Under-19 level and was picked for his country as they attempted to win the 2016 Under-19 European Championships in Georgia. It worked.

After five appearances and three assists, Ludovic Batelli’s squad dispatched Italy 4-0 in the final, the youngster setting up Jean-Kevin Augustin for the opening goal.

“He is a very talented boy who loves dribbling. He laughs all the time,” revealed his coach, talking after the tournament.

“When we prepared [for the EURO] he gave everything he had and learned plenty of things on the defensive side. He improved a lot.”

It was then no surprise when Rene Girard picked Harit for the Ligue 1 opener, giving him his debut in the 1-0 win away at Dijon.

“Amine brings something special, he makes the difference,” said the now former Nantes boss. “I was amazed how he finds space between the lines. He is not particularly strong but he does not go down easily either.”

What does Harit bring to the Nantes team? 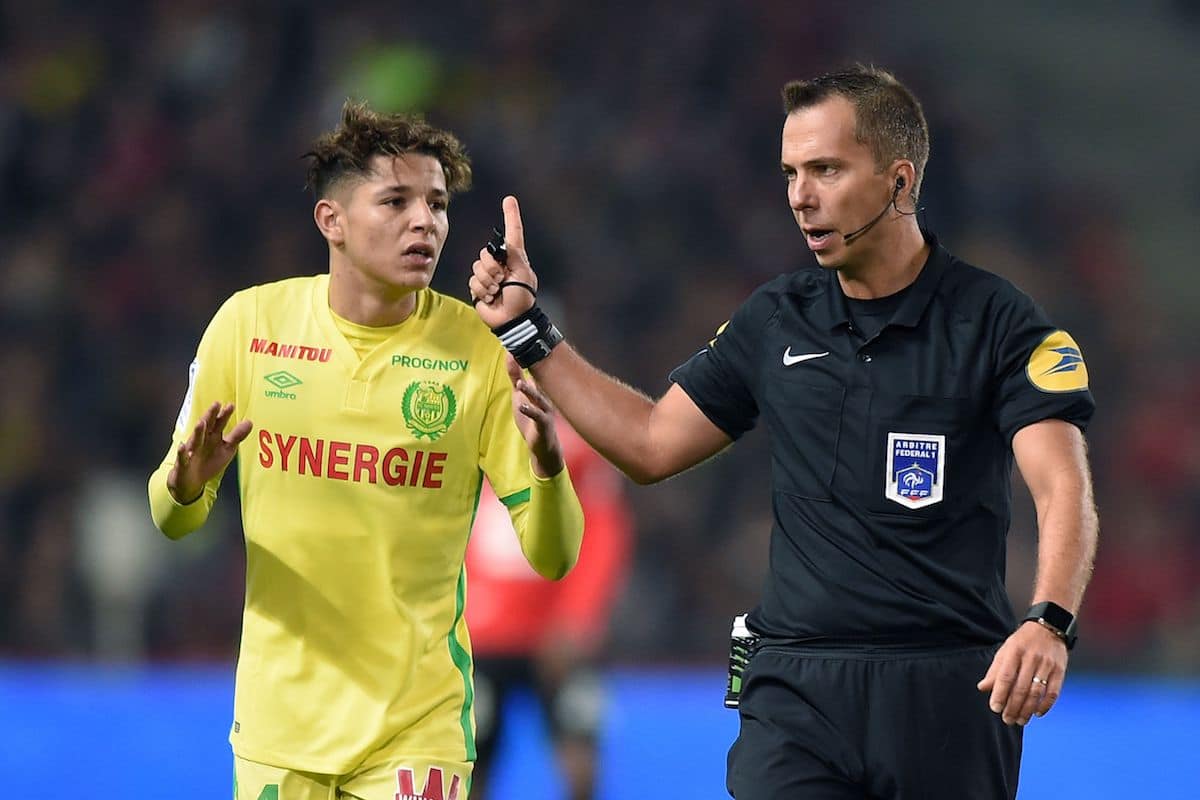 Read More: Possible Replacements for Emre Can at Liverpool

Perhaps it was down to Girard’s indecision, but in those early weeks we were able to see Harit’s full adaptability in the midfield.

He played on the left of a midfield three, or as a No.10, even on the left wing. Due to his wide skill-set, it was impossible to label him in any one role.

Harit has been likened to both Zinedine Zidane and Franck Ribery and it’s not an outrageous comparison as may come to mind.

The 19-year-old drifts effortlessly into space, is always looking for the ball and has the speed of thought and feet to dance past defenders.

As the former Lille and Montpellier boss alluded to, the midfielder is very adapt is finding space in those areas that defenders hate. He plays on the half turn, looking to get his head up and drive forward into space. 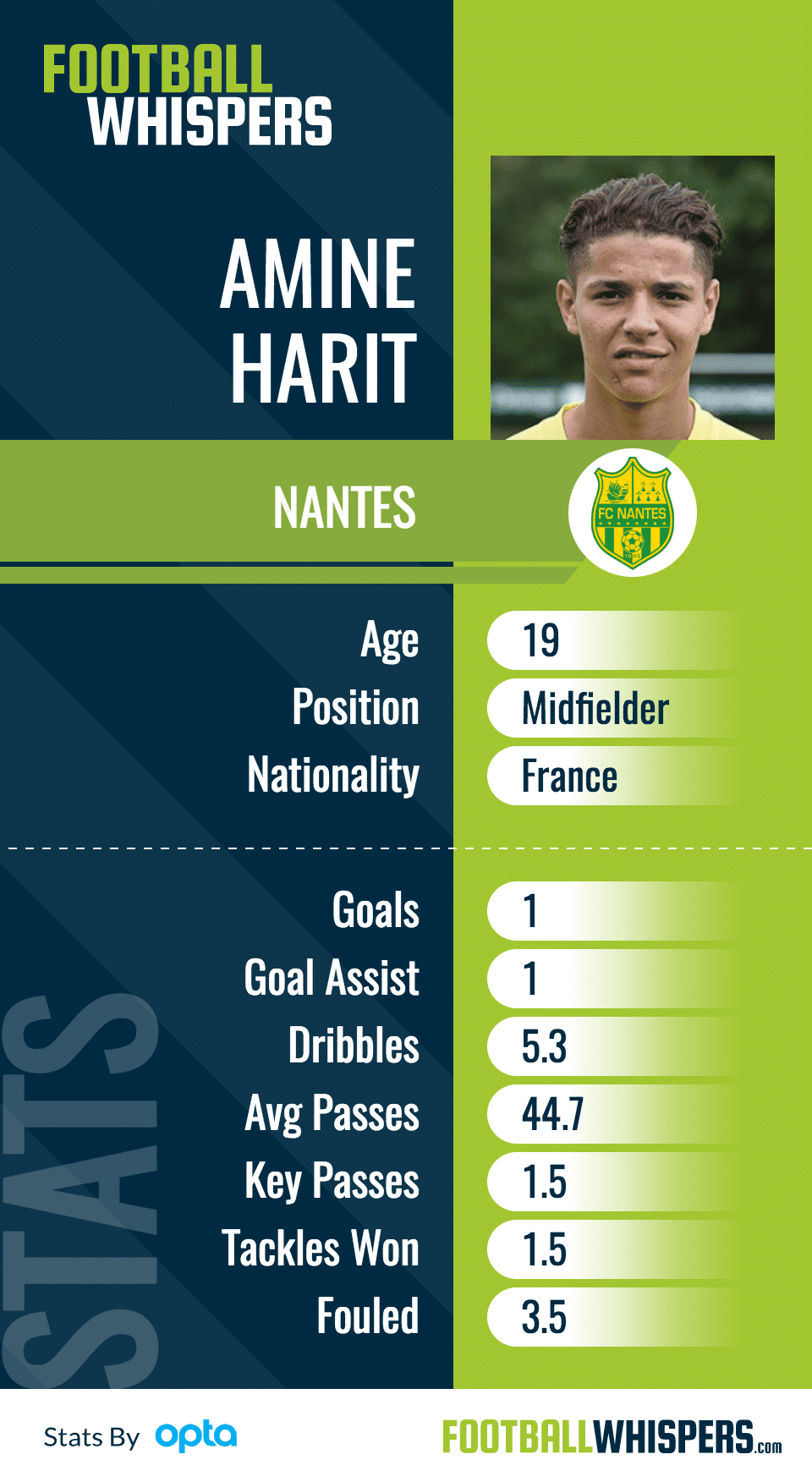 Nantes were struggling badly and President Walder Kita made the surprise decision to appoint former Portugal and Sporting winger, Sergio Conceicao as the new head coach.

Settled on a 4-4-2 formation, similar to how Leicester City won the Premier League last year, Harit has been given the Marc Albrighton/Riyad Mahrez role., starting 22 of his 29 appearances this season.

Playing on the left-wing, he has space to attack full-backs, but is allowed the freedom to cut inside and cause havoc through the centre.

His dribbling catches the eye, attempting 5.3 dribbles per 90 minutes, impressively he completes them 3.8 times and it’s clearly his strong point and something he loves to do:

“I never put myself under pressure,” Harit admitted. “Out on the pitch, it's all about enjoyment. I am free and I never overthink the game. I think this is one of my strengths.”

Yet, what stands out more is his vision and passing ability. He does things that you wouldn’t expect from a teenager playing in a mid-table team, he spots passes that many mature playmakers wouldn’t see.

Playing against PSG, the ball is played out wide and Harit has time and space to drill a low ball into the box. 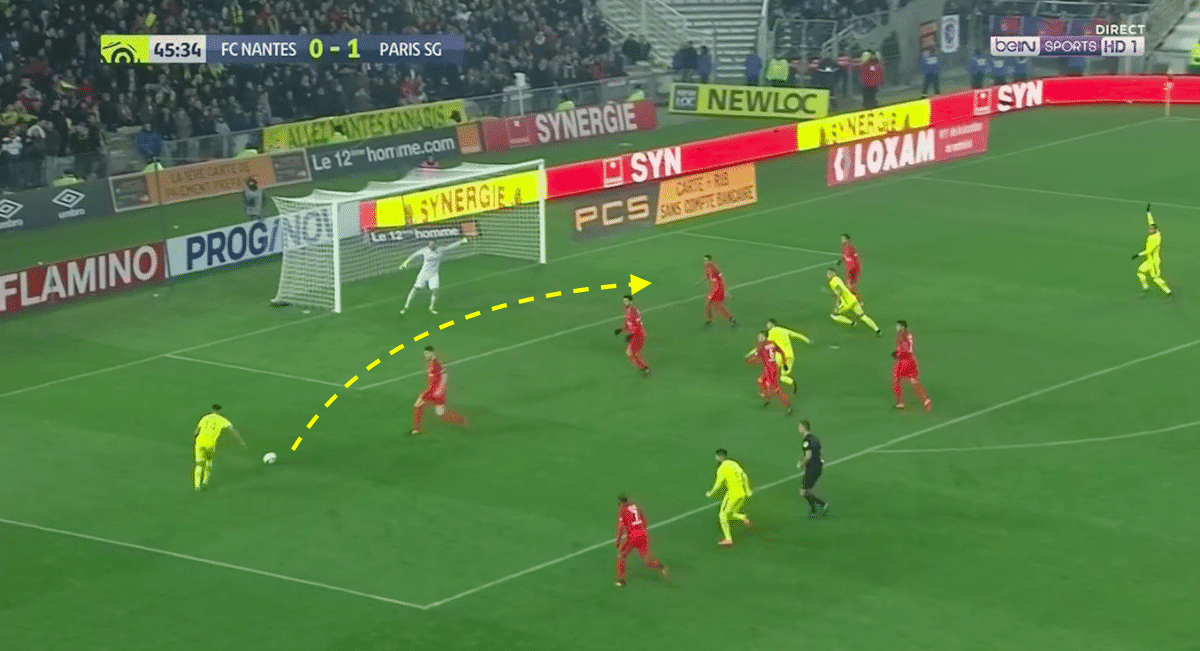 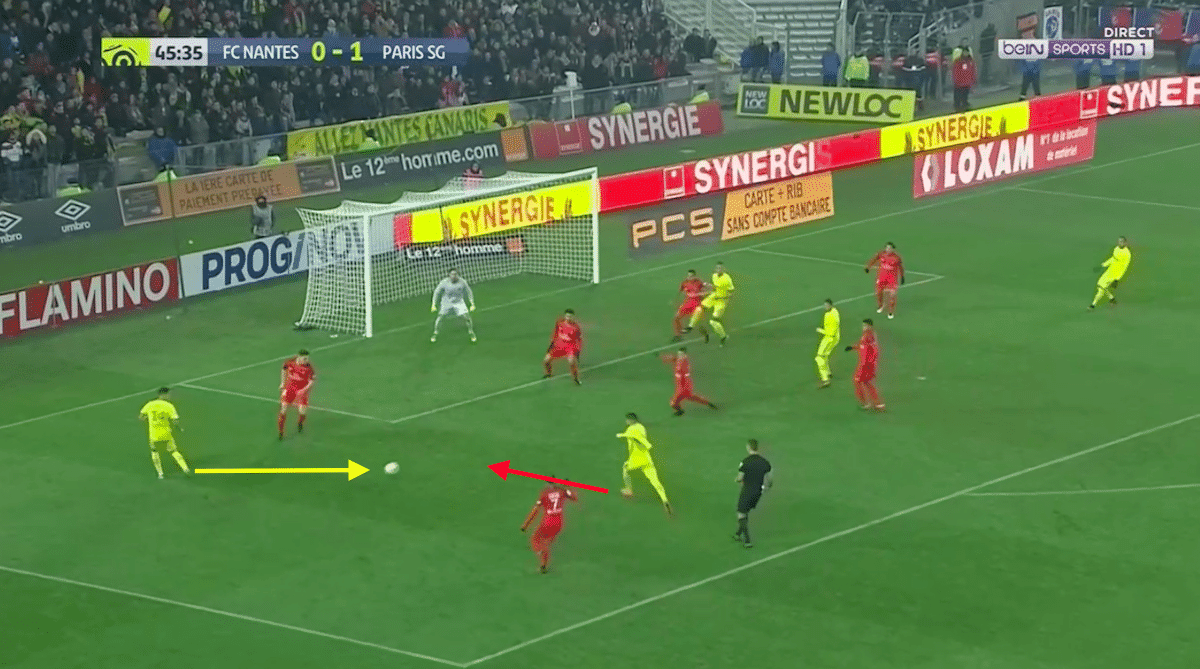 It’s easy to see when paused, the options in the middle are covered, but Harit spots it and delivers a neat little reverse ball to Lucas Lima and the full-back is able to pull off a shot. On another day, it could have found the back of the net.

He looks light-weight – at 179cm and 66kg – but he can hold off the physical challenges, and has the quickness of movement, active feet and intelligence to keep himself mobile.

Harit loves nothing more than to face up defenders and run at them, but don’t let his dribbling and tendancy to lose the ball make you believe he’s greedy. His only goal of the season so far came due to his team-work and vision.

Although he is happy to go it alone, he’ll always look for an easier and better option. He might not always pull it off, but he is very capable.

Sent on the break away at Angers, Harit has space to burst into, two touches take away his momentum, but he picks a beautiful pass to a team-mate. 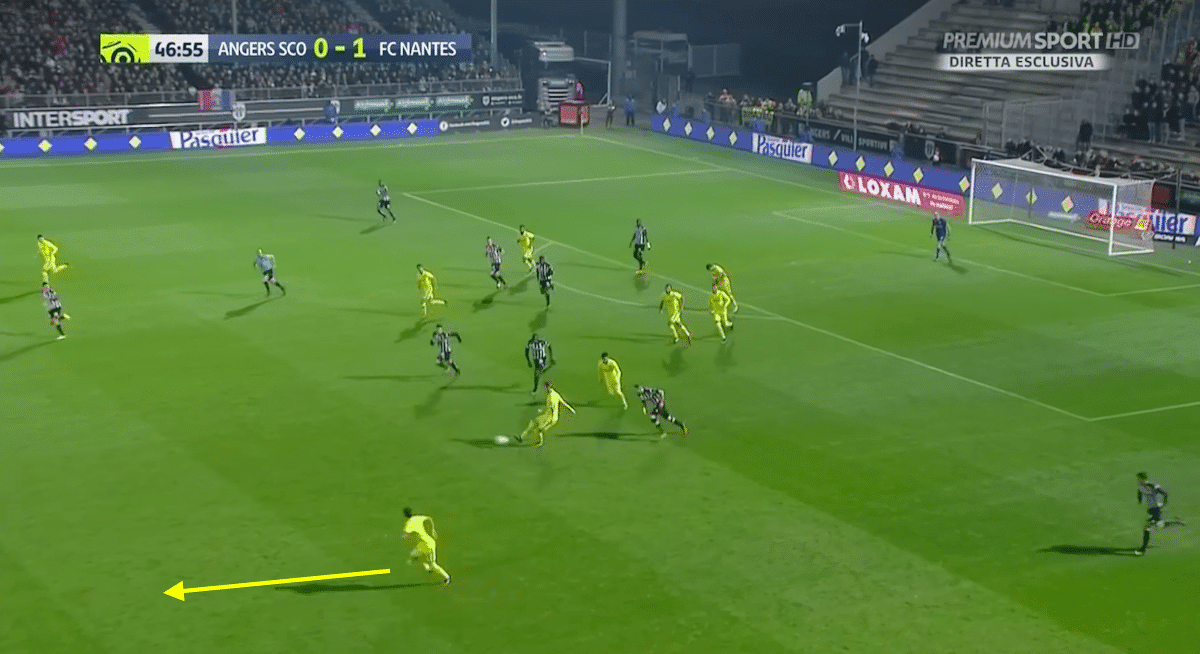 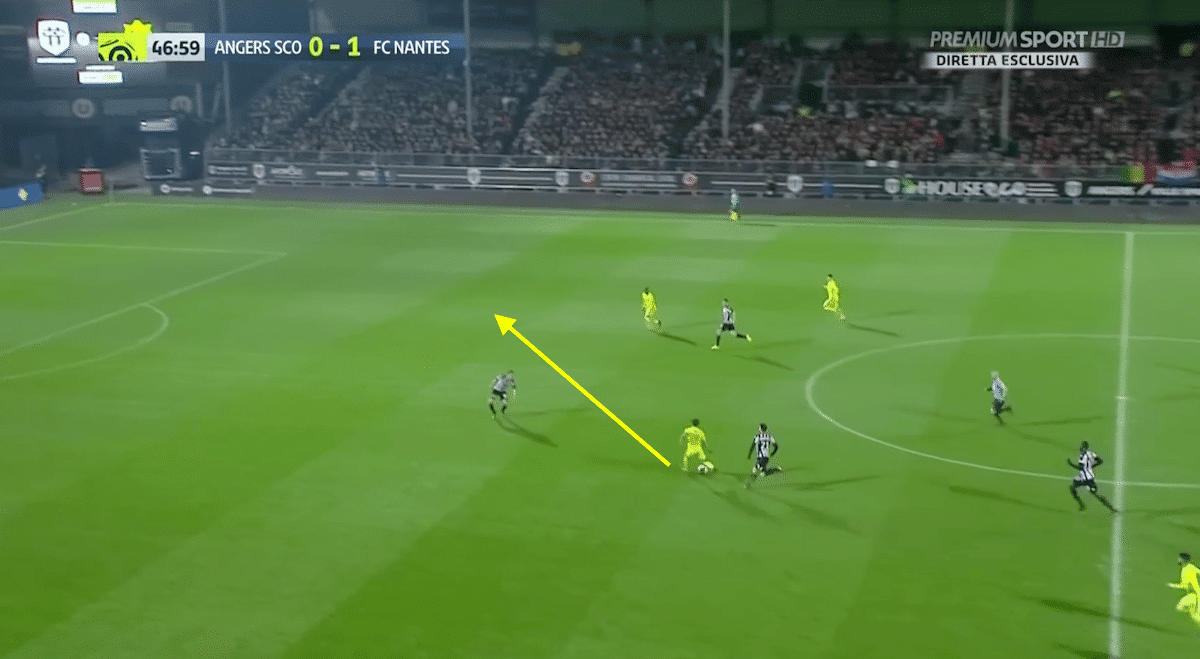 The home side’s defence are caught flat-footed and the youngster bursts into the opposition box. Jules Iloki, the Nantes right-winger, sees Harit and lays the goal on a plate. A great example of his drive, unselfishness and speed. 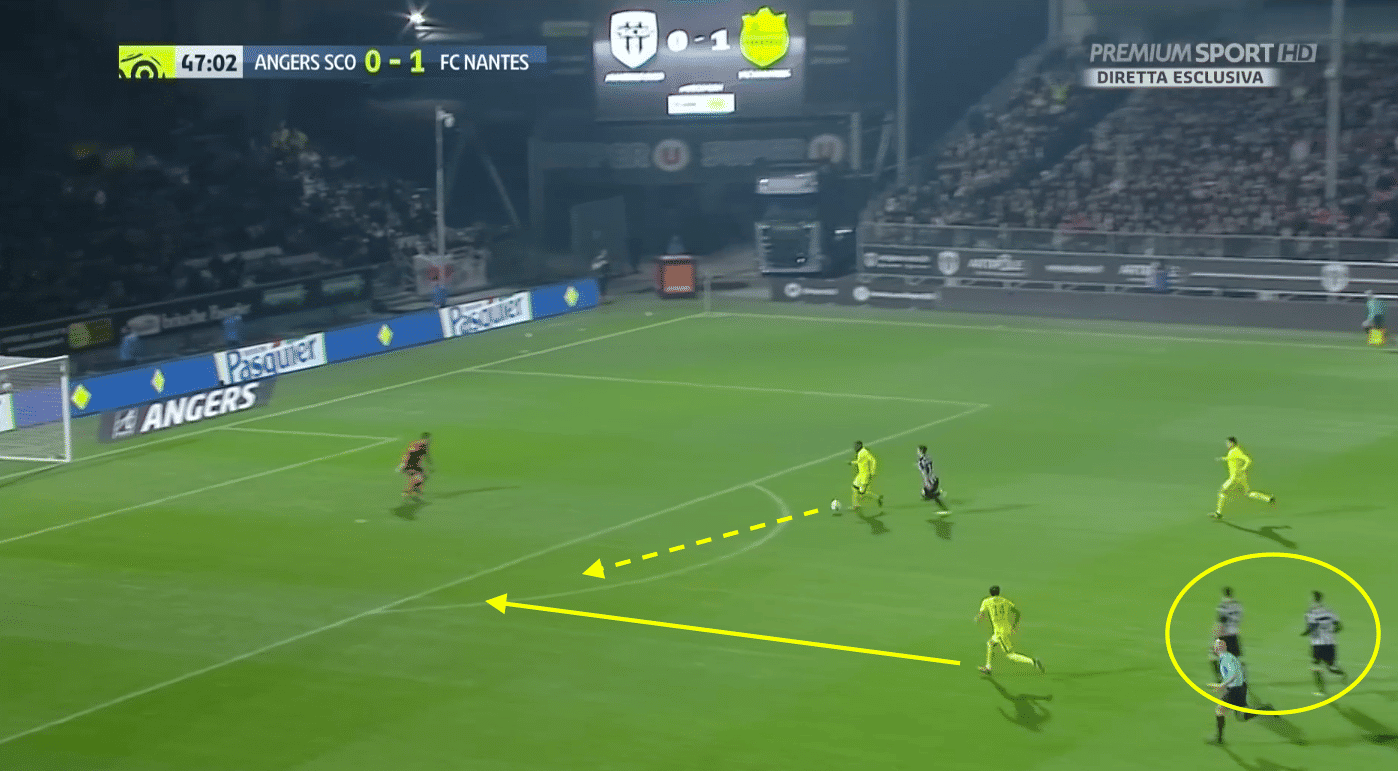 Able to attack and defend

Unlike in England, the wide players in France are not obliged to get back and defend, however, playing 4-4-2, it’s needed to protect the midfield and full-backs. Harit attempts 2.5 tackles per game, winning 1.5 and makes 1.2 interceptions per 90 minutes, showing that he’s no slouch. He’s only making 0.9 fouls too.

All his hard work comes down to one reason only, he wants to win the ball so that he can drive the attack and push back the defence.

Ready for move to England 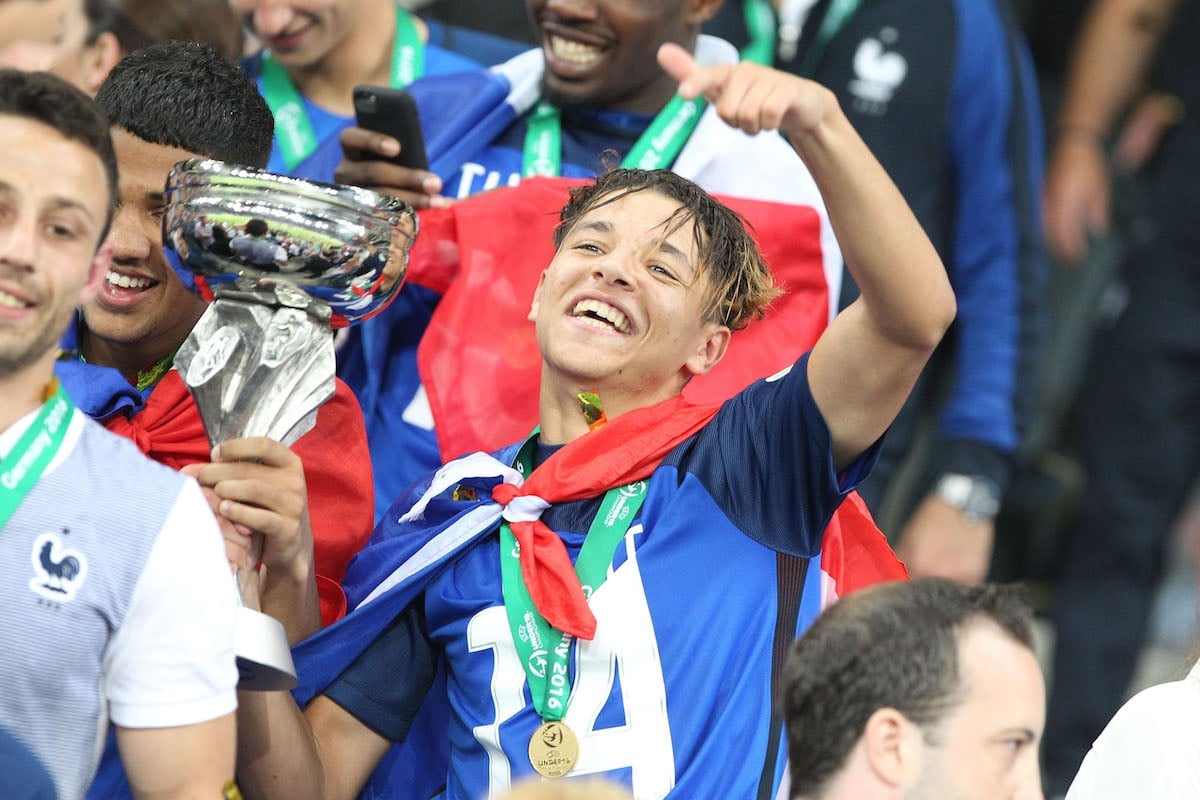 It’s understandable why both Liverpool and Arsenal have shown interest, but with only 33 first-team matches under his belt and the growing influence of Sergio Conceicao, it would be a mistake to leave France at this stage.

If he was to play 4-4-2 in England, he’d need to become stronger and a better defender and he wouldn’t get the same level of space to drift through the centre.

You can definitely see the Zidane comparisons when he cuts inside and swivels past his markers and it wouldn’t be a surprise to watch him develop into an Eden Hazard type winger.

Playing in a three-man attack would suit him more, especially in the Premier League, but that would take more development time.

Contracted until 2020, and with some discipline problems earlier in the season, it would be advisable for all parties if the 19-year-old was left to grow and mature a little more before looking to make a move up the ladder.

“I have high goals. I have confidence in myself and I want to achieve great things. I am happy with my first season in Ligue 1,” he told local paper, Press Océan.

It’s clear that he’s confident and ambitious, but moving too soon could stop any real chance he has of being a superstar in the Premier League.