Marcos Alonso was one of the surprise packages of the season for Chelsea.

When the Blues announced they were bringing the former Bolton Wanderers and Sunderland man back to England, there were more than a few eyebrows raised.

He had always been a competent defender but was never a player who seemed like he would be a first-team regular for a side competing at the top of the Premier League.

Yet fast forward to the end of the 2016/17 season and the Spaniard played 35 times for the Blues, including 31 league appearances as the Blues won the title for the second time in three years.

But there is talk of Chelsea wanting another player who can play at left wing-back. That does make sense, as they will be competing continentally as well as domestically next season.

And with that in mind, Alex Sandro is subject of Chelsea transfer rumours, with La Reppublica linking him with a move to Stamford Bridge.

The 26-year-old spent time at Atlético Paranaense and Santos before moving to Europe with Porto for €9.6million in 2011.

After spending four years and making more than 100 appearances in all competitions for the Portuguese side, he moved to Juventus for €26million and it’s there where the Brazil international’s reputation has really taken off.

He started off competing with Patrice Evra for the left-back slot, with coach Max Allegri slowly easing Sandro into the side, before slowly becoming the unquestionable first-choice option by the start of the 2016/17 season.

If you watch him, you can see just how good he is going forward.

He is strong, quick, powerful in possession and is able to hold off opponents who get close to him.

As Adam Digby wrote for Football Whispers: “Sandro in full flight is a joy to behold, like a taller version of the great Roberto Carlos (minus the obsession to repeatedly attempt to repeat the one good free kick he ever struck).

“Like the former Real Madrid man he often looks to get to the touchline and drill a dangerous cross low into the area, looking for either a team-mate or a defender to put it into the net.”

He is not only great going forward but he is also a very composed defender.

While Juventus may have started to favour a four at the back this season, he is more than capable of patrolling the flank on his own as a wing-back in a system, something which Antonio Conte will be more than aware of. 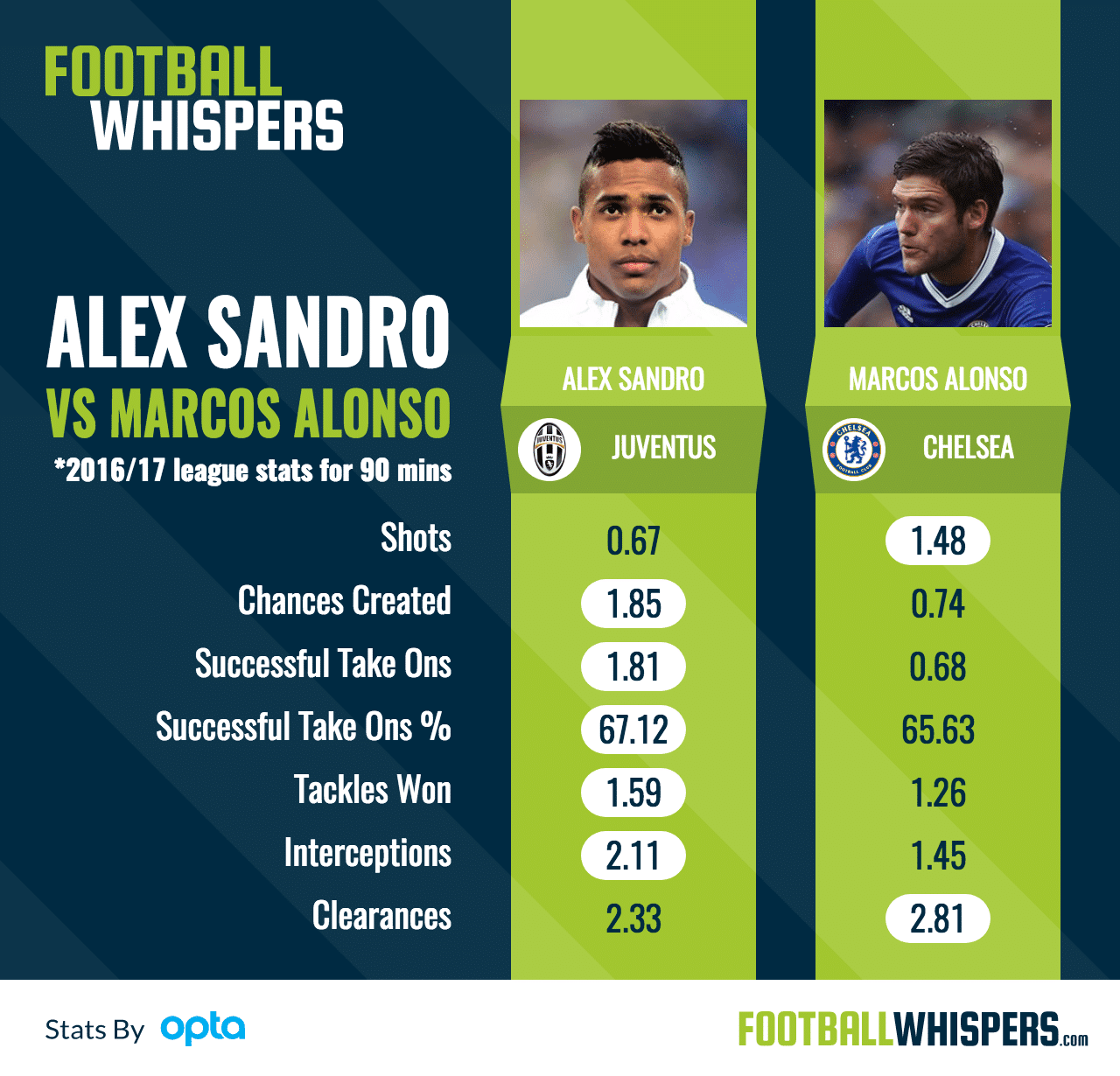 If you compare the 2016/17 league stats of Sandro to Alonso, the Brazilian comes out favourably.

Alonso is perhaps more of a direct goal threat, averaging 1.48 shots per 90 minutes to the Juventus man’s 0.67.

He also comes out on top in terms of clearances made per 90 minutes, averaging 2.81 to 2.33. But other than that, the Spaniard falls short.

If you ask many Chelsea fans an attribute Alonso brings to the team, they may well say height, with his goal where he got ahead of Héctor Bellerín in the 3-1 win over Arsenal being a good example of that.

And Alonso definitely has that over Sandro, with the Spaniard measuring 6ft 1ins and the Brazilian just 5ft 9ins tall.

How viable is the transfer?

Given that in his second season with I Bianconeri, Sandro has earned rave reviews for his impressive performances, it is unlikely he will leave The Old Lady.

It is more likely that he is in fact looking for a new contract. The Blues are used to players’ agents linking their clients with them.

It seemed to happen regularly with Dani Alves in his attempts to get a new contract at Barcelona, and unsurprisingly he never ended up wearing the blue of Chelsea.

It seems highly likely that he is trying to get more money at Juventus. And although he is one of the best left backs in the world, with Alonso more than proving himself and Sandro having three years left on his contract and a guaranteed starting spot at one of the best teams in Europe, who are of course Champions League finalists, there is no way he would come cheap.

And to be honest there is no real reason he would want to leave anyway.

He would of course be a great signing for Chelsea but it just seems more like a fantasy than a real-life signing at the moment.