Hunting down what to bet on for the upcoming Amir Khan vs Kell Brook fight? Check out our free tips right here.

Fight to go the distance

Amir Khan vs Kell Brook will take place this Saturday at 10:30 pm, UK time. It’s one that many punters are keeping an eye on to see which way the markets and odds will shift. But for us, the following tips should provide adequate value ahead of Saturday’s fight:

Note that while the odds displayed above are accurate at the time of writing, it is normal that they may shift during the buildup to the fight. So for that reason, we recommend that you check in with the stated bookmakers for the updated odds when you can.

The first Khan vs Brook tip may come as a bit of a surprise for some of you. After all, the bookmakers have tipped Kell Brook as the favourite to win this fight. But with Amir Khan displaying odds around the 2.30 mark, we feel that this is a better value bet to make. The reason for this is that we do not actually believe that Khan should be listed as such an underdog. While both men are in the twilight of their career, Khan will still have that tremendous hand speed that he has been well known for over the last 10 to 15 years.

Such speed is a problem to deal with for any fighter, especially for Kell Brook. Obviously, Brook is the more powerful of the two men, as we can see by his knockout record for his career. However, he hasn't always been as light on his feet as Amir Khan, and at 35 years old, one has to wonder about what kind of damage such relentless punches could do during the fight. It would also be fair to say that the training of Amir Khan seems to have been much better than Kell Brook’s over the last few weeks and months.

This has been backed up by media reports and insights from the two fighters as to how they've been preparing.

This is obviously a more risky play concerning the Khan vs Brook fight, as the odds for this market stand at 4.50, on average. But like all the other tips we have provided here, there are sound reasons as to why we are shooting for this one over others. Basically, Khan hasn't exactly been a knockout expert throughout his career. Looking at his record, he has 34 wins and just 21 by way of knockout. Many of these knockouts occurred early on in his career when he had the energy to storm after his opponents too.

At 35, we don’t anticipate that he will relentlessly go after Brook enough to grab the knockout. With that said, there is no guarantee that this will come true, but we feel that it is a most likely play as to how things will pan out. Going for this market also provides two potential methods of victory. If the fight goes the distance, which we have also predicted, should Khan then be judged as the winner, the bet would automatically come through.

But during the fight, if he is able to get a TKO, which we believe is more likely than a straight-up KO, the bet will also win. 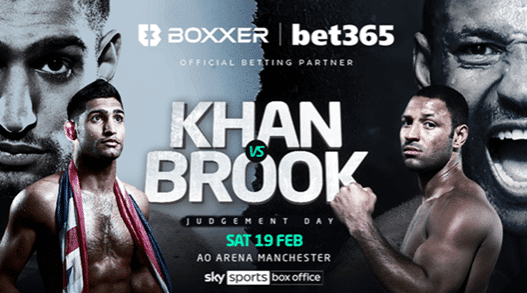 Prediction 3 – Fight to go the distance

With the weight class that these guys are fighting at, you don't always see fights ending early due to a ferocious knockout. This is also why the bookmakers have relatively low odds on this fight going the distance. As you can see from the tips and predictions above, the odds for this fight going the full 12 rounds are floating around the 2.25 region. But it's not just the weight class that has led to these odds. There are many other factors surrounding this specific fight that has meant that these odds are so low.

The fact that both men are 35 years old means that it is unlikely that they will have the physicality or power to knock the other man out. Arguably, it is more likely that if a knockout was to happen, it would be Kell Brook who lands the punch. Again, anything could happen on the night. It's also fair to say that neither of these fighters has been particularly active in the boxing world over the last few years. In fact, they have only had a handful of fights between them.

So when we do witness Amir Khan vs Kell Brook on Saturday night, there will be a bit of rust on display. This also helps to drag out the fight, which makes this a more likely outcome.

Amir Khan will take on Kell Brook on Saturday night, with the fight scheduled for 10:30 pm. The betting markets are already open for this fight. So you can back the tips we have presented for you at any point between now and Saturday. As for some specifics of the fight, we’d like to run through some important details right now:

Tale of the tape

This fight will take place at the AO arena in Manchester. This is actually why the location can also play an important part in the outcome of this fight. Amir Khan is a local boy in Manchester, being born and raised just outside of the city, in Bolton. Should there be a capacity crowd on Saturday night, it is likely that he will have the full support of the home fans. And as we all know, in boxing, this can make a huge difference on the night.

Should the tickets be 100% sold out, up to 21,000 people could be in the AO Arena – quite a large number we can probably all agree!

The reason form might not play a huge factor compared with other fights is because both of these men haven't been particularly active over the last 5 years. But regardless, we can still take into account how they have performed in the last 5 fights. Amir Khan has managed to win 3 of his last 5 bouts. The most recent win came against Billy Dib for the WBC International Word Title. This was back in 2019. As for Kell Brook, he has won just 2 out of his last 5 fights. The most recent fight resulted in a loss for the WBO Title against USA's Terence Crawford.

Which prediction should I go for?

Of all the predictions we have mentioned, it is probably safer to back who you think will win the fight. Of course, we are shooting for Amir Khan to win, but you may have a different opinion. Just to clarify, none of the predictions provided is guaranteed.

Can I use bonuses to bet on the Khan vs Brook fight?

Yes. It is absolutely possible to use betting bonuses to wager on the Amir Khan vs Kell Brook fight. You can use either new player bonuses or existing bonuses for this one. Either way, both involve a free bet in most cases. 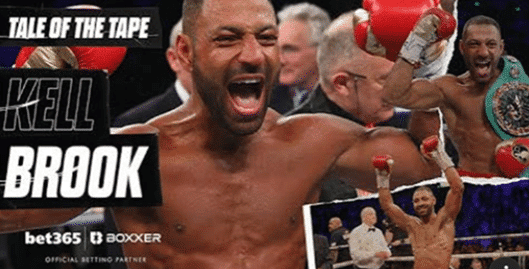 Is it possible to live stream the event through my betting account?

Unfortunately not. This is because mainstream boxing events such as this one are usually available through the box office only. So if you are to watch the fight, you will need to purchase it ahead of time through the relevant provider.

Can I place live bets during this fight?

Absolutely. Practically all bookmakers will allow live betting for the fight on Saturday night. There are plenty of markets to consider when it comes to live betting as well. So you won't be short on options.

Are cashouts supported for the markets mentioned here?

For the markets that we have given through our predictions, yes, cashouts are thoroughly supported. Whether you actually get a cash out offer or not, however, depends on how your bet performs.

How do I know which bookmakers provide the best odds for this fight?

Easy – just stick with the bookmakers we have mentioned. These include Bet365, Ladbrokes, and William Hill. Each of these bookmakers has great odds for the Amir Khan vs Kell Brook fight on Saturday.

Free bet offers UK: The top bookies to choose from in 2022