In Moussa Dembélé and Leigh Griffiths, Celtic possess the two best strikers in Scotland. The duo have been crucial in securing back-to-back trebles for Brendan Rodgers, taking it in turns to tear opponents apart. Now, the Hoops have a third top-class centre-forward.

Odsonne Édouard spent last season on loan at Celtic from Paris Saint-Germain and did enough to convince the Hoops to part with a club-record transfer fee to make the deal permanent. The 20-year-old scored nine times in 22 appearances for Celtic over the 2017/18 campaign as Rodgers took a shine to the young Frenchman.

Not content with a deal for one young, French striker, Celtic have also been linked with a move for Manchester City’s Thierry Ambrose. The 21-year-old striker spent last season on loan at NAC Breda in the Eredivisie, with the Scottish champions scouting the player more than once ahead of a potential bid.

But with Edouard now officially a Celtic player, and Ambrose potentially about to be signed, where does that leave Dembélé and Griffiths? How will the Scottish champions line up next season with so much attacking talent at their disposal? Would this be a sign that Rodgers is looking to add depth to his squad or an indication that a drastic squad overhaul, or tactical shift, could be coming?

Dembélé, Édouard and Griffiths are all out-and-out centre-forwards, so it’s unlikely that Rodgers could ever use them as a front three, although Griffiths has been known to drift into wide areas.

Ambrose is more adept at running the channels, with his first name drawing somewhat lazy comparisons with a certain Thierry Henry, but the 21-year-old is not a winger. And so Rodgers’ 4-2-3-1 formation probably won’t bend to accommodate all four strikers. In fact, it’s difficult to envisage how it would harness more than one at any given time. 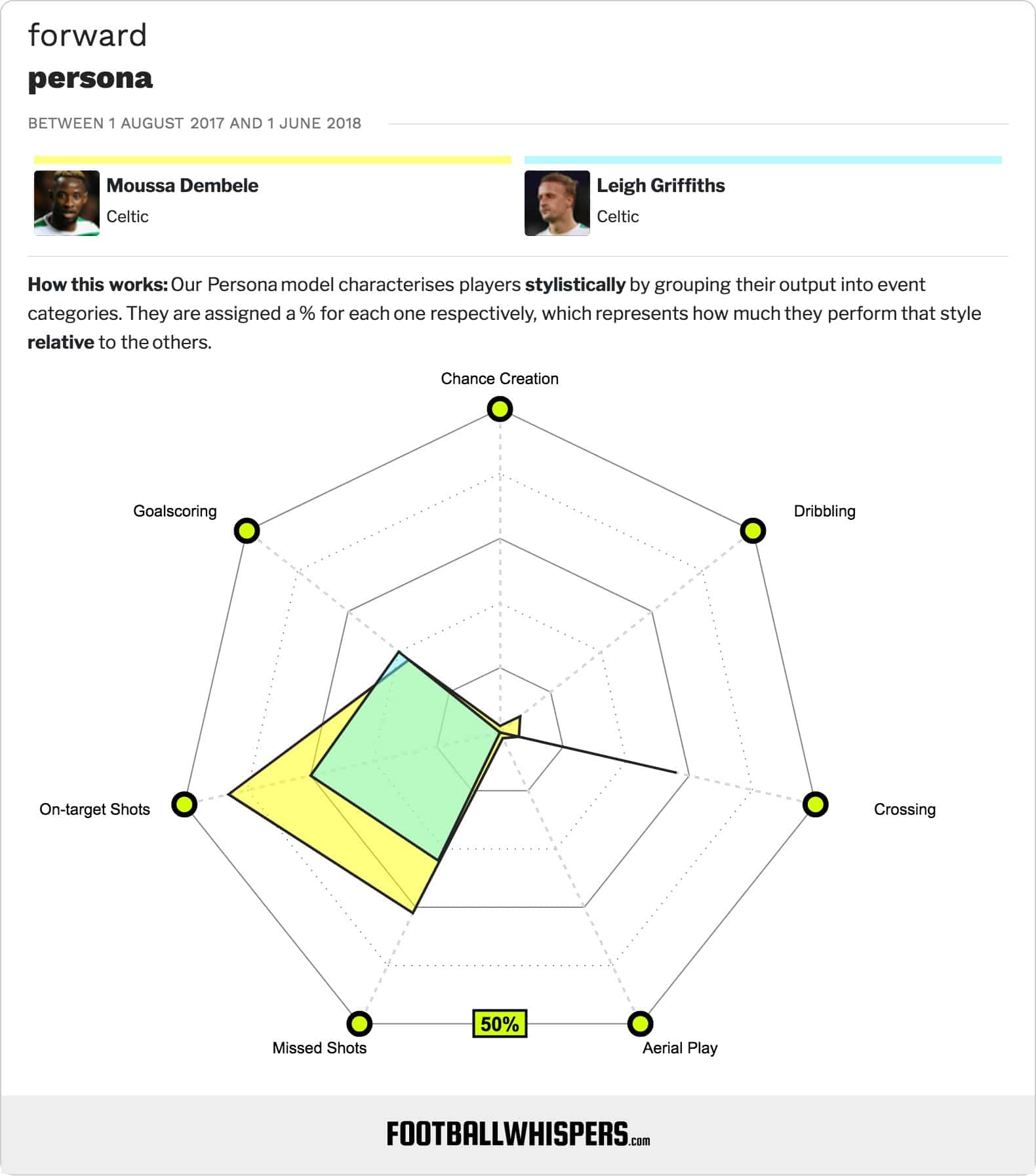 There’s also Scott Sinclair to consider, a player who lost his way last season but is still considered a key figure at Celtic. Tom Rogic is another who must be accommodated somewhere in the lineup such is his quality, and then there’s James Forrest, one of the Hoops’ players of the season last term.

On top of that, Rodgers has Jonny Hayes, Stuart Armstrong and

Of course, it’s possible Dembélé could leave Celtic this summer. The French striker has been linked with a myriad of Premier League clubs, from Brighton and Hove Albion to Chelsea, over the past two seasons.

Now, with Édouard, Griffiths and potentially Ambrose on the books, Rodgers might feel comfortable enough to let him leave. If that decision is made, the Hoops would surely collect a big fee for their star man.

Édouard, in all likelihood, is the long-term replacement for Dembélé. Both players are productive in front of goal (Édouard averages 2.97 shots per 90, compared to Dembélé’s 3.55 per 90) with their scoring rate also relatively similar (Édouard averages 0.57 goals per 90 while Dembéle averages 0.62). Glasgow could be the right place for the 20-year-old to grow and develop.

Comparing Ambrose's statistics to the players he would have as teammates as Celtic, it's clear that the 21-year-old lags behind. He averages 2.12 shots per game, while Griffiths averages a massive 5.37. But the potential is there.

Celtic’s recent success in developing young players has been mixed. Patrick Roberts failed to make much of an impression on loan from Manchester City last season, despite a positive first 18 months in Glasgow, with the much-hyped Charly Musonda returning to Chelsea a year before the end of his initial loan agreement.

On the other hand, Olivier Ntcham has lived up to his billing following a £2million move from Manchester City last summer. The French midfielder has set a precedent for compatriots Ambrose and Édouard to follow, with the aforementioned Dembélé also showing how exposure to the Champions League, in particular, can raise the profile of a young player in Scotland.

With Rodgers now entering his third season as Celtic manager, the Northern Irishman is now facing a watershed in his career at the club.

His time in Glasgow has been an unmitigated success to this point, but he must prove that he can take the Hoops to the next level. Champions League qualification will still prove tough, but if they can get to the group stages Rodgers will be expected to at least lead a challenge for the last 16.

To get there, Celtic must demonstrate a greater degree of depth and tactical flexibility. Perhaps this is why Rodgers is so keen on adding more attackers, like Ambrose and Édouard, to his squad. The Hoops already boast the best-attacking line in Scotland by quite some distance, but this summer’s moves might have Europe in mind.