Mauricio Pochettino believes he has met five “genius players” in his career as a player and a coach. They are Diego Maradona, Ronaldinho, Jay-Jay Okocha, Iván de la Peña and, finally, Mousa Dembélé.

“I always told him (Dembélé), ‘If we had taken you at 18 or 19 years old, you would have become one of the best players in the world.’ I would have loved to have taken him on at 18,” the Argentine revealed in Guillem Balague's book Brave New World: Inside Pochettino's Spurs.

So, in January, when the Belgian left Tottenham after almost seven years, Pochettino wouldn't have been under any illusions as to how difficult it would be to replace Dembélé.

Which is perhaps why Spurs didn't even try. Or it may have simply been a case that buying players in the winter transfer window is a laborious and expensive task.

The summer market is far easier to navigate and with Tottenham set to end their self-imposed two-window transfer ban, Pochettino can attempt to fill the void Dembélé left.

And according to reports in Italy, Spurs have reignited their interest in Napoli midfielder Amadou Diawara, the 21-year-old midfielder who has struggled for regular game time under Carlo Ancelotti.

“It is obvious he is very disappointed at the moment because he has become third choice in the midfield of Napoli,” Diawara's agent, Daniele Piraino, told Gonfia La Rete earlier in the campaign. “If it continues like this we will make certain evaluations because he will start to be unhappy with his situation.”

Napoli are reportedly willing to listen to offers for Diawara and a bid of £45million could be enough to prise the Guinea international away from Stadio San Paolo.

When he arrived in Naples in 2016 from Bologna, Diawara was viewed as the ideal deputy to Jorginho in Maurizio Sarri's side. An intelligent space finder, a smooth passer, and with the close control to evade challenges, he had every required to be the second-choice regista.

He was afforded big-game starts during his first season: away to Juventus in Serie A; both matches against Real Madrid in the Champions League group stages, during which he impressed.

But in his second campaign, he was very much a back-up option for Sarri. A late substitute to ease the burden on Jorginho when matches were won.

When Ancelotti replaced the now Chelsea manager last summer, Diawara was a little awestruck. “Ancelotti is our extra weapon in the Scudetto race, for the team, the club and the city,” he said. “Working with a coach like him is important, especially for a young player.”

With Jorginho also heading to Stamford Bridge, the current campaign was expected to be a breakout one for Diawara. Instead, new signing Fabián Ruiz knocked him back down the pecking order, where he was also behind Marek Hamšík and Piotr Zieliński.

The departure of club legend Hamšík in February did little to help Diawara's quest for game time. And it's telling that, with just two months of the season remaining, he has completed 90 minutes on just three occasions in Serie A.

So, the big question: is Diawara worth the £45million it would take to bring him to Tottenham?

Over the course of this season, Pochettino has utilised several different systems; from 3-4-1-2 to 4-3-1-2, a 4-4-2 diamond to 4-2-3-1. The midfielders within this system have to be multifaceted, able to both influence defence and attack in equal measure.

It's why Eric Dier has struggled during the current campaign – the England international can break up attacks but not start them – and Victor Wanyama is often a substitute for the same reasons.

Moussa Sissoko can be an effective box-to-box midfielder but it's really only Harry Winks who collects a pass off the Spurs centre-backs and progresses the ball into the attacking third on a consistent basis.

Diawara could certainly help Spurs in this respect. Of the 68.62 passes per 90 he attempts in Serie A, 34.58 are in the opposition half and almost a quarter are forward. 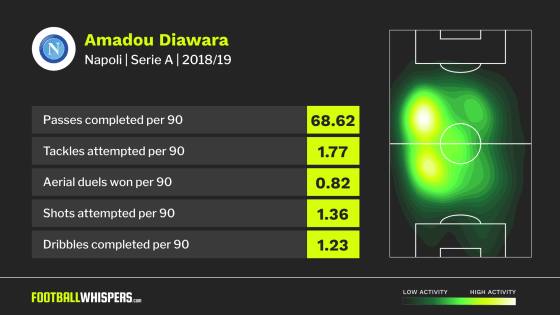 He isn't a midfield dribbler in the same mould as Dembélé, completing just 1.23 per 90. However, given his frame – he has been dispossessed just six times all season in the league – and technical ability, this is an aspect of his game which could undoubtedly be improved by Pochettino.

What is another area of encouragement, though, is only three Serie A midfielders can better Diawara when it comes to winning back possession in the middle third (5.44). He wins the ball, moves it on, and finds space to take it back if required. It's simple but effective.

At 21 years old, there is still plenty of room for Diawara to develop. He needs regular football to do that, however, and after three seasons as a rotation option at Napoli, he may wish to move on in the summer.

Tottenham could be the ideal environment for him, working under a coach dedicated to improving players and willing to give them opportunities to make and learn from mistakes.

Pochettino may not view Diawara as a genius player. He may not view him as a like-for-like replacement for Dembélé, either. But he could prove a smart addition for Spurs and the ideal project for the Argentine coach.