Daily Telegraph reporting earlier this week he told the board to sign him at any price, even £100million.

But the Chelsea transfer target looks set to move to Manchester United, with widespread reports suggesting he is set to leave Everton and join up with José Mourinho, who coached him at Stamford Bridge, for a £75million fee.

And that move has meant that Álvaro Morata, who only this morning was thought to be on the verge of a move to Old Trafford, is no longer a Manchester United transfer target.

That could push him towards Chelsea, with the Spanish striker is understood to be unhappy with his playing time this during the 2016/17 season after being given assurances when he rejoined the club last summer he would be an integral member of the first-team.

Indeed it was the belief that he would be a regular for Los Blancos that prompted Morata leave Juventus for the Bernabéu.

He scored 20 goals in all competitions, however, he remained second fiddle to an out of sorts Karim Benzema and it's little surprise the 24-year-old is frustrated.

Morata matured into a fine player during his time in Turin, becoming a regular in Max Allegri’s first-choice XI and scoring in both the Champions League and Coppa Italia finals.

Yet back with his hometown club, Morata has been unable to convince Zinedine Zidane he deserves to start every week.

He was in the first XI for only 14 La Liga games while his only start in the Champions League came against Legia Warsaw in the group stage.

Morata will have no shortage of suitors this summer now that he's made it clear he wants to leave, and last month, it was expected he would join Chelsea, with AS reporting a deal could be close.

And if that interest is rekindled, it would make for an interesting addition to Conte’s squad, especially if Diego Costa departs, which a move back to Atlético Madrid looking likely.

Morata possesses the speed and directness needed when the Champions League theme tune rings out at Stamford Bridge next season.

In the Spanish striker Chelsea would be getting a player who – much like their fiery coach – was not born in Turin but was almost certainly made there.

Prior to joining Juventus, Morata found himself behind the likes of Cristiano Ronaldo, Benzema and even Gonzalo Higuaín, with playing time understandably scarce in such a star-studded attack.

Eventually it became too much and, much like he has now with Zidane, Morata began to feel isolated from the man in charge.

“I didn't demand to be a starter, but I did expect to be treated better than I was,” he told radio station Onda Cero in March 2015. “My relationship with [Carlo] Ancelotti was virtually nonexistent.”

Despite Juve paying €20million to sign him there would be no concessions made by Allegri, who continued to field Carlos Tévez and Fernando Llorente up front in the early weeks of the 2014/15 campaign.

Morata’s first start did not come until November 1 but by the time the calendar turned to the New Year he had firmly supplanted Llorente in the starting XI.

His pace was a perfect foil for the fighting spirit and sheer class of Juve’s Argentinian No.10, who Morata clearly respected.

“Carlos often tells me that Italy is like university for strikers,” he told La Gazzetta dello Sport at the time.

“He’s right, as here you become a real player in every aspect. This is a unique opportunity for me.”

Morata thrived with the added responsibility and it was in Europe where he shone brightest, as his style meshed perfectly with Allegri’s tactical approach.

Spearheading a 4-3-2-1 formation with Tévez and Arturo Vidal marauding behind him, Morata bagged a goal in each leg of the last-16 tie with Borussia Dortmund, won a penalty that decided the quarter-final clash with AS Monaco before claiming the ultimate revenge by netting in both the home and away legs of a meeting with Real Madrid.

He impressed in the final too, scoring as Juve lost 3-1 to Barcelona and his second-half goal temporarily gave the Bianconeri hope they could topple the Catalan giants.

That was not to be but by scoring against Manchester City and then Sevilla in the first games of 2015/16 campaign, Morata equalled Alessandro Del Piero’s club record of netting in five consecutive Champions League fixtures.

During the winter he laboured and argued with Allegri, but the time spent with Tévez clearly taught Morata to fight and he eventually won back his place. Goals against Inter, Fiorentina and local rivals Torino were key in Juve achieving a fifth consecutive league title.

In Europe his tireless running was a major feature of the clash with Bayern Munich – the Bianconeri collapsed after Mario Mandžukić replaced him in the second leg.

Morata popped up to score a superb goal in the Coppa Italia final against AC Milan, only for that to sadly prove to be his final contribution in the clubs famous black and white stripes. 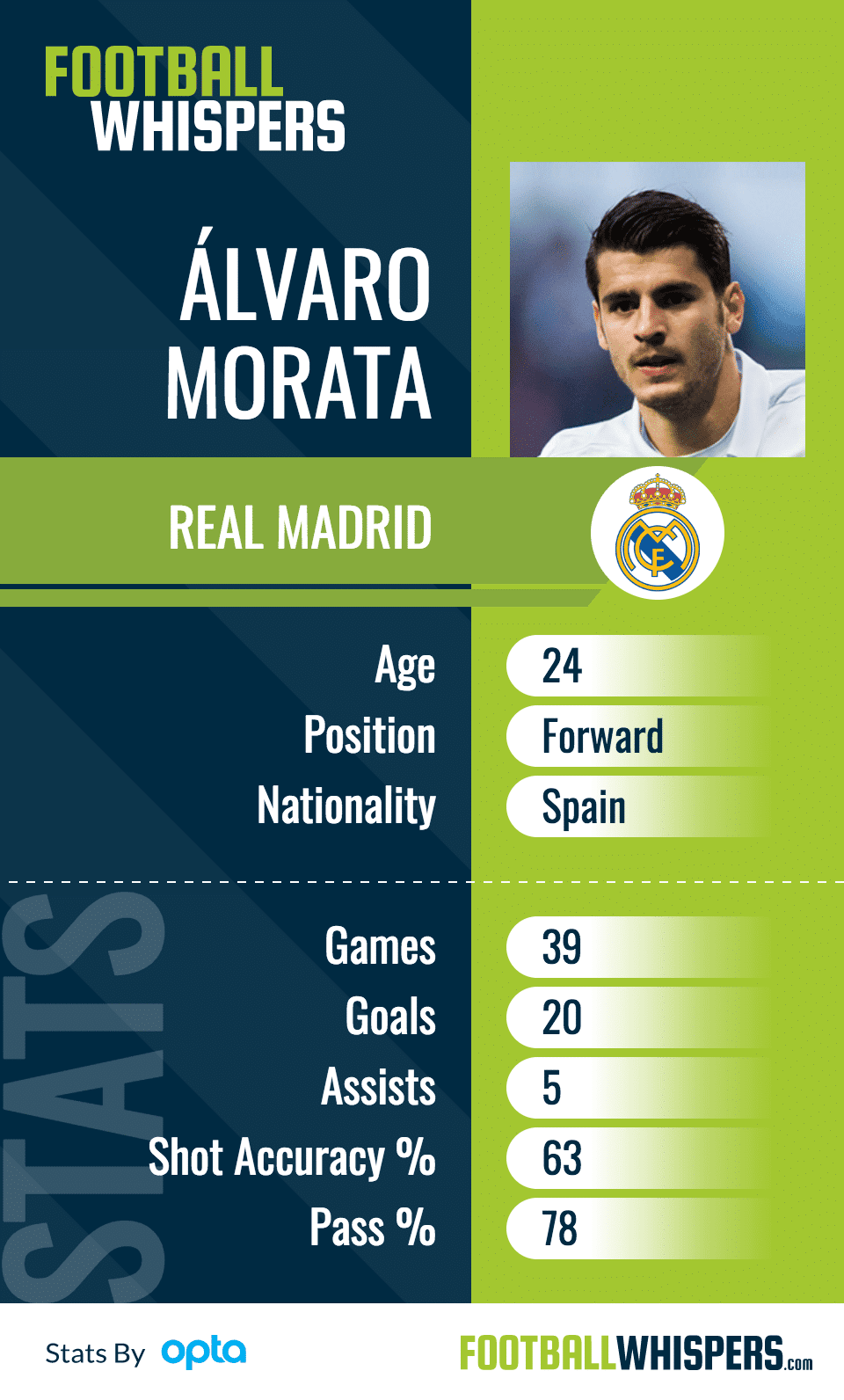 Madrid exercised the €30million option in the original deal to bring him back, and while he has not played as much as he clearly would like, the sharpness he honed over two years in Italy has certainly not been lost.

Morata has averaged a goal every 89 minutes in La Liga this season. It's a figure no player in the Real Madrid squad can match.

The only player in Spain with a better scoring rate is one Lionel Messi. Not bad company to be keeping.

Morata remains a deadly finisher and deserves greater playing time, something which would undoubtedly be available should he opt to join Conte and Chelsea.

Morata is under contract until 2021 and would not be a cheap acquisition, but with Roman Abramovich backing the club nothing is off limits in terms of Chelsea transfer targets, while they could also comfortably raise his salary from the current €2.5million per season he earns in Madrid.

While losing out on Lukaku may seem like a blow, it could be a blessing in disguise.

Morata would be a smart signing, one who could fill a void in an otherwise talent-laden squad and a player who received his footballing education in the same city as Conte.