On Wednesday night, Tottenham Hotspur take on Borussia Dortmund in one of the key games that could decide who finds success in Group H of the UEFA Champions League.

Real Madrid are favourites to win the group and perhaps go all the way to the final, leaving Spurs to fight with the German side for a birth in the last 16.

Each club has their star striker; Mauricio Pochettino will be glad it’s no longer August and Harry Kane is finding the back of the net, and Peter Bosz will rely on the goals of former Manchester City transfer target Pierre-Emerick Aubameyang to fire BVB into the next round.

Outside of the two centre-forwards, both clubs have exciting young talents ready to take the Champions League by storm.

Dele Alli needs no introduction. Last season he contributed to 35 goals in all competitions. However, due to his red card against Gent in the Europa League, the 21-year-old will miss the first three group stage fixtures.

Despite his performances on the pitch, a misjudged gesture after England’s win over Malta suggests the former MK Dons midfielder still has some maturing to do before he takes his game to the next level.

One player who will be on the pitch on Wednesday is United States winger Christian Pulisic. Still just 18 years old, he has already made 59 appearances for Dortmund and has 16 caps for the US Men’s National Team.

He is America’s next great hope and the player ready to take all their dreams on his young shoulders.

Often spoken about in the same breath as Alli, although the two have similar ambitions and potential, they are different types of player.

Although they both see the ball just as much as each other, it's what they decide to do with it that separates them. The American will face up to defenders and look to beat his man off the dribble, whereas Alli is more inclined to link up play and push into the box.

Both are very adept at making off the ball runs, creeping in at the back post, but Pulisic is more of a dribbler. He has break-neck speed in possession and loves nothing more than driving at worried defenders.

The Spurs man can play more as a support striker than a winger. Comfortable with his back to goal, he can take on the target-man role when Kane drifts wide. Alli also has the footwork and drive to beat opponents off the dribble, but it’s more with that quick first step and strength, rather than Pulisic’s dribbling ability and sheer foot-speed.

Each player is superb in their own right, and if qualification is still close going into the final three games, how each steps up to the Champions League challenge could decide who makes it through. 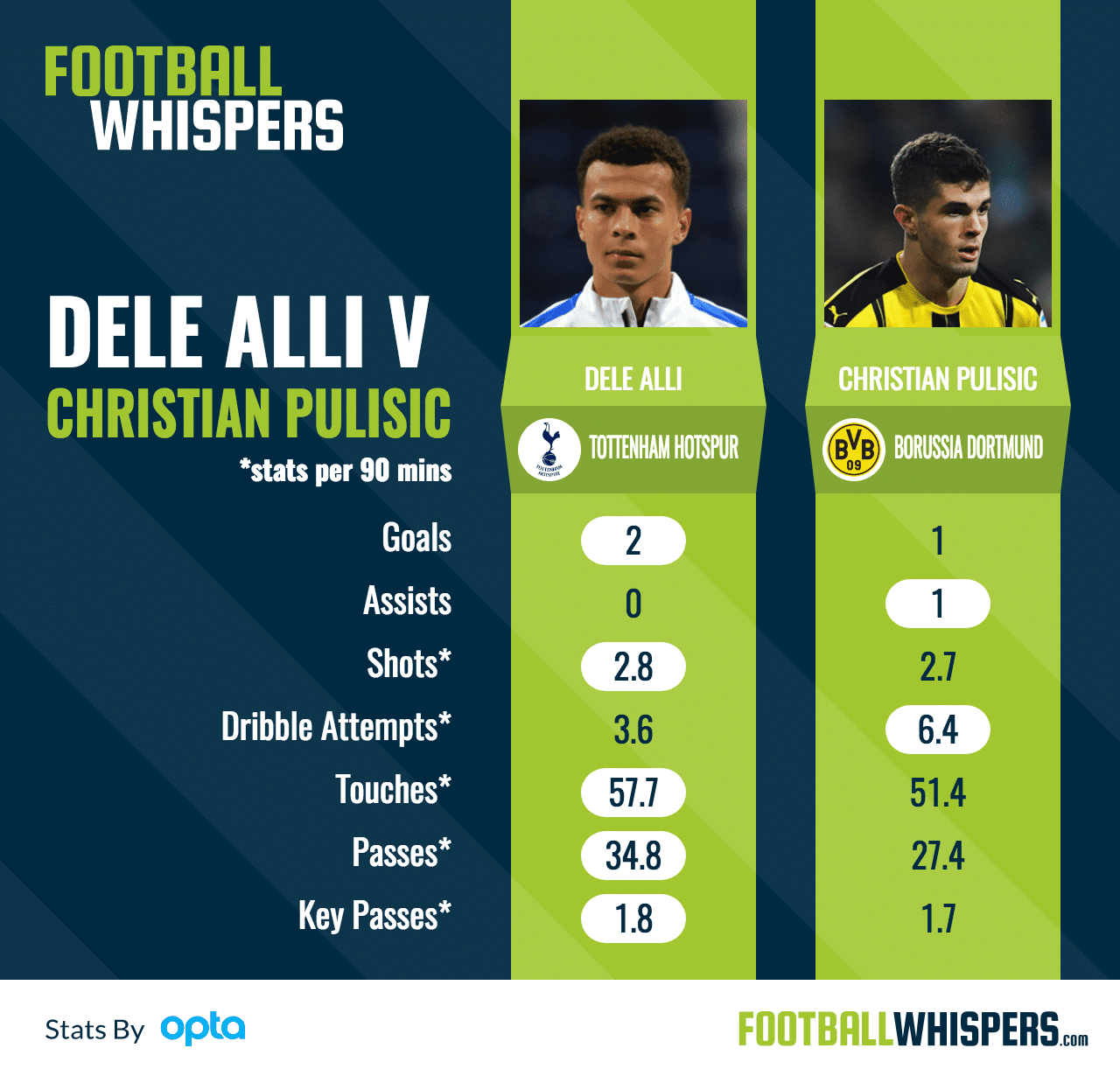