Not only did all the home nation teams fail to qualify for the final stages of the 1984 European Championships, but British broadcasters decided to snub the tournament too. This, then, is the story of the forgotten Euros of 32 years ago which was won by one of the greatest sides never to be seen.

The France team that were crowned champions of Europe in 1984 are remembered fondly, by those who were fortunate enough to see them, as one of the greatest to ever play the game. Built around the sublime talent of midfielder Michel Platini, they were the outstanding team of the early 1980s who had come close to winning the 1982 World Cup and were now hosting a tournament that many made them favourites to win.

For British sides though, the tournament was far from memorable. In the qualifying stages for France ’84, Denmark had qualified ahead of England, Northern Ireland twice beat West Germany, but the Germans still scraped through thanks to a last minute winner against 10-man Albania; Wales weren't so lucky and went out after a last-minute Yugoslavia goal against Bulgaria. Meanwhile, Scotland finished bottom of their group. 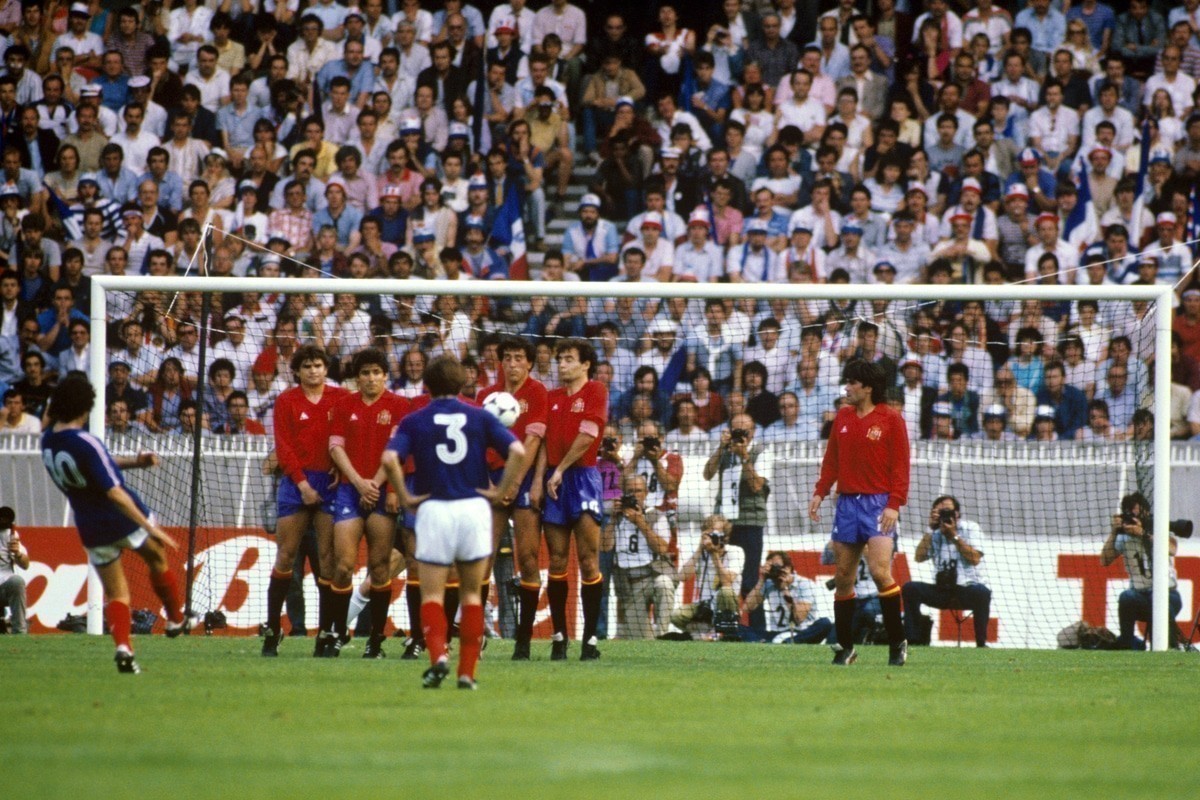 It’s hard to comprehend now but TV bosses at both ITV and the BBC obviously thought that a football tournament with no British representation was of no interest to anyone with only two games in that tournament being shown live — the West Germany vs. Spain group match and the final itself.

The decision ultimately deprived viewers of watching some classic matches as they happened at a time when football was not seen as the sexy product it is today, meaning fans were starved of seeing one of the most entertaining sides in history.

Unlike 2016, the format of the European Championships in 1984 meant that only seven teams joined the hosts to battle it out for the honour of being called the greatest side in Europe, leaving little room for error as only the two top teams in the two groups of four progressed to the semi-finals.

Denmark were expected by many to accompany the hosts through to the next stage at the expense of Belgium and Yugoslavia, while defending champions West Germany were fancied in the other group, with a close battle between Spain, Portugal and Romania for the runner-up spot. 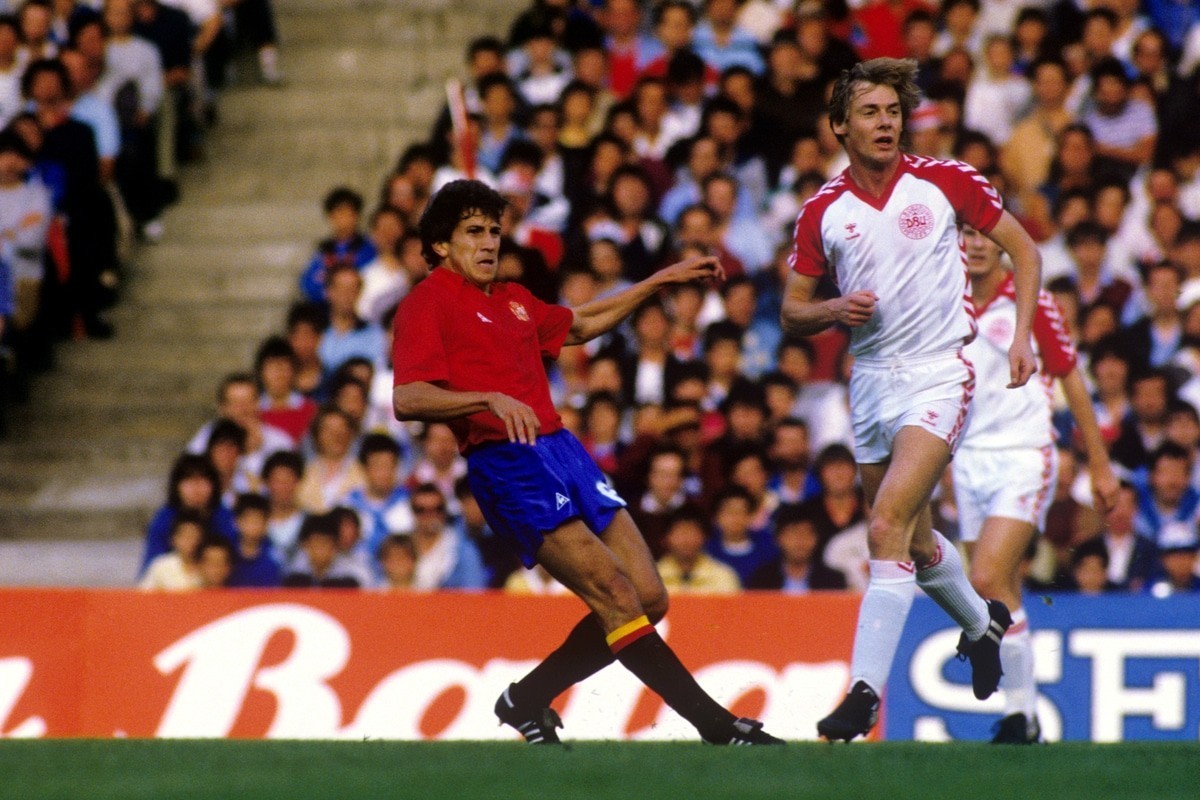 And so it was that the hosts would face Denmark in the much anticipated opening game of the tournament which nobody in England, Scotland, Northern Ireland or Wales would be able to see.

The Danes planned to stifle the French and their wonderfully attacking playmakers with Klaus Berggreen attaching himself French star Michel Platini like glue throughout the game as they looked to frustrate their opponents. But the Danish resolve was broken in the 78th minute when Platini finally escaped the attention of his marker and his effort was deflected into the net.

France were in devastating form, with Platini the orchestrator of a brilliant midfield that also contained Luis Fernandez, Jean Tigana and Alain Giresse. Platini scored seven goals in France’s three group games, including hat-tricks against Belgium in a 5-0 win and also in a 3-2 triumph over Yugoslavia.

Denmark would eventually, like France, progress from Group 1, but the latter stages of the early games were overshadowed by tragedy. Yugoslavia were the only side not to gain a point from their three matches, but genuine disaster struck in their encounter with France. Having pushed the hosts all the way in a thrilling 3-2 defeat, the team doctor collapsed on the pitch after suffering a heart attack and would never recover.

Games in the second group weren't quite as exciting, though, but there would still be plenty of drama. West Germany began their tournament with a disappointing goalless draw with Portugal, but thanks to both Spain and Portugal also drawing their two matches, the Germans looked set to qualify following a win over Romania. All they had to do was avoid defeat to Spain.

Germany had the better of things in the first half against La Roja, hitting the woodwork three times, but when Spain were awarded a penalty, Carrasco’s spot kick was saved by Harald Schumacher. 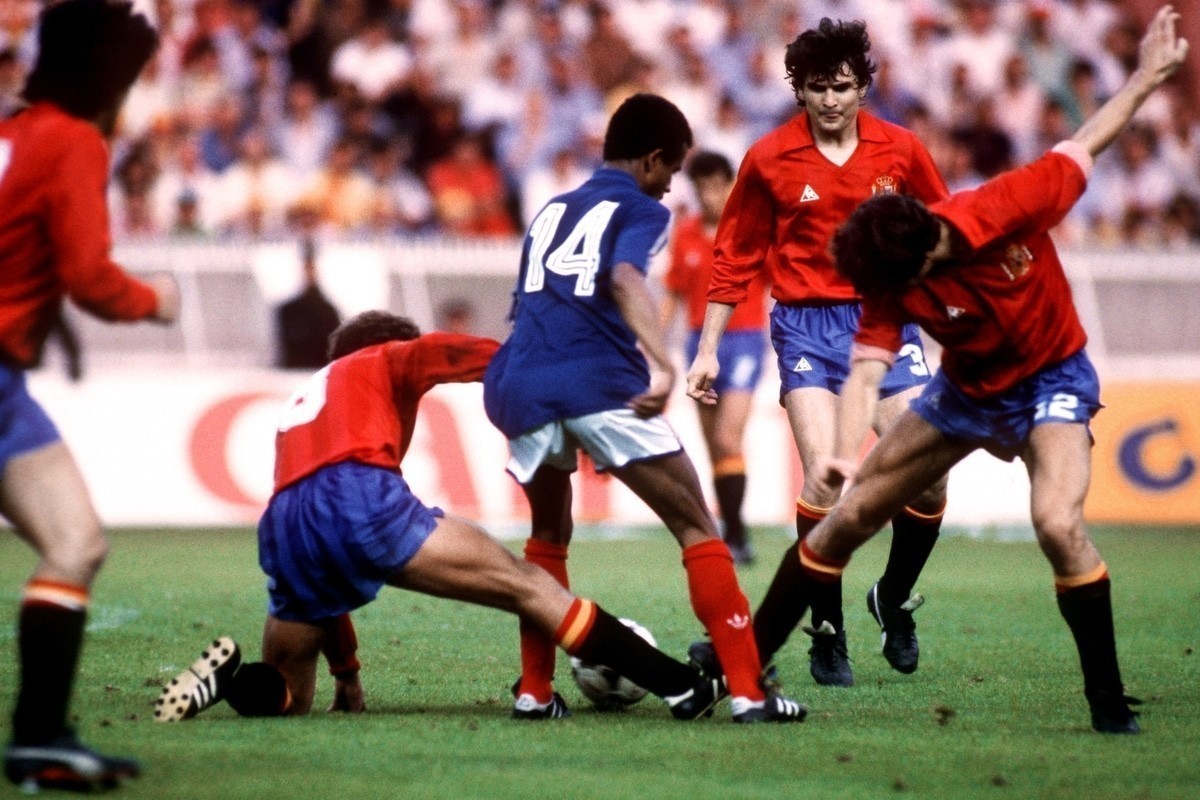 But in the last minute, Antonio Maceda headed in a Juan Antonio Senor cross and the millions of television viewers who were fortunate enough to be watching live on television, would witness the rare sight of a German side going home early in an international competition.

For the semi-final Portugal went through from Group 2 with Spain, but even with talented stars such as Fernando Chalana, Rui Jordao, and Nene, few fancied their chances against the hosts.

As it turned out, the match proved to be something of a classic. Platini played an important part in the opening goal when he was fouled on the edge of the Portuguese penalty area and Jean-Francois Domergue’s free-kick was deflected by Joao Pinto into the net.

France could easily have extended their lead but Portugal equalised through Rui Jordao midway through the second half. In extra time both goalkeepers were kept busy by a flurry of attacks, but Jordao eventually put Portugal ahead in the 97th minute.

France soon hit back through Domergue, in the 114th minute and just as penalties looked inevitable, Tigana wriggled through the Portugal defence, went round keeper Manuel Bento and cut the ball back for Platini to score a dramatic winner in the dying minutes.

The other semi-final between Spain and Denmark was just as exciting as Denmark took a third-minute lead thanks to Soren Lerby, but Maceda popped-up again for Spain; his 67th-minute equaliser meaning the game went into extra-time.

Berggreen was sent off during extra-time by English referee George Courtney, who took the name of eight players that night, including Spaniards Rafael Gordillo and Maceda; who would both now miss the final if they got there.

In the resulting penalty shootout referee Courtney was once again heavily involved when Michael Laudrup had his penalty saved, he was given a reprieve after Spanish goalkeeper Luis Arconada had been adjudged to have moved from his line and the retaken effort was scored. But the Danish luck soon ran out.

With the scores locked at four each, Preben Elkjaer missed the crucial kick and Manuel Sarabia dispatched the winning kick. Spain celebrated, once again progressing by the finest of margins and leading many to feel their name was on the trophy; but if they were to be crowned champions of Europe the Spanish would have to defeat a Platini-inspired France in the final. 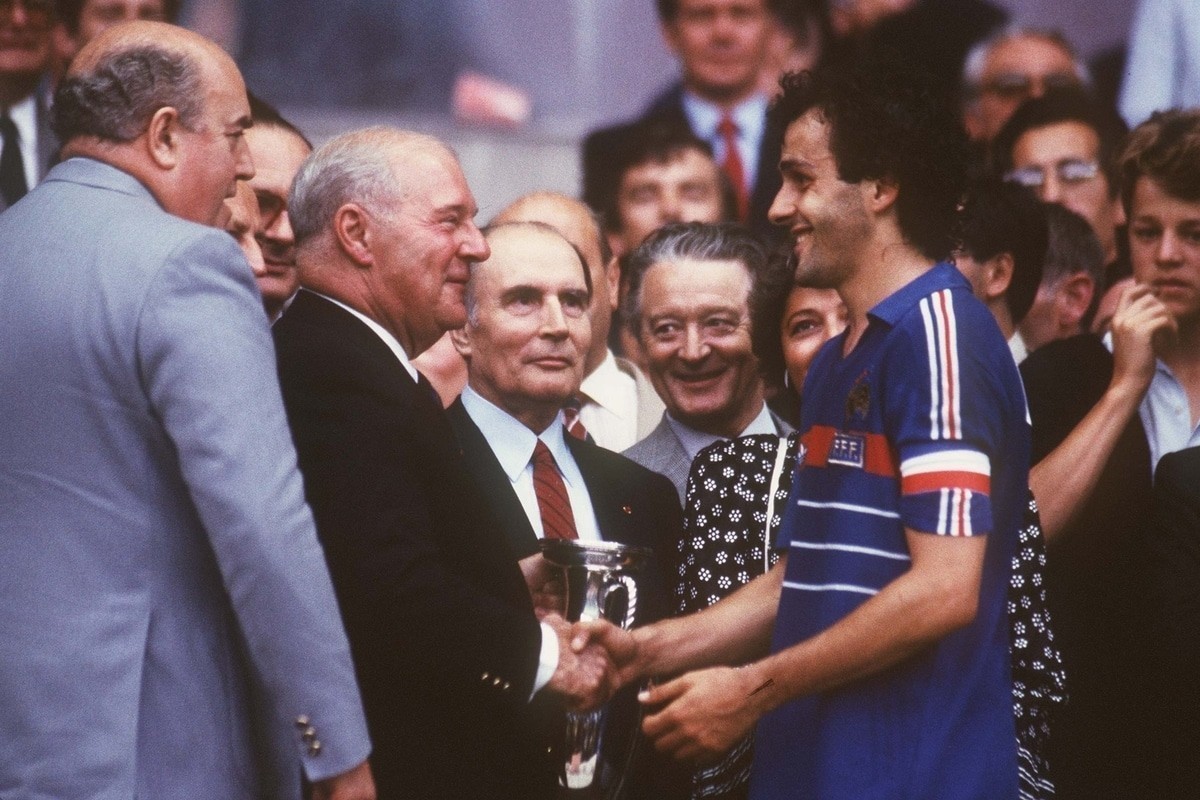 Unfortunately, a final that promised so much actually failed to deliver the kind of excitement which had been witnessed in previous games. But few of those French spectators at the Parc des Princes that day (though maybe not those who were finally able to watch back in the UK) would care too much about that if France could get their hands on the trophy.

Spain’s luck, it seemed, had finally run out as injuries and suspensions deprived them of several key players, and a slip from goalkeeper Arconada on 56 minutes proved to be the decisive blow.

Until this point Spain had held their own and almost took the lead through a Santillana header that Patrick Battiston knocked the ball off the line. France would eventually come into the game though, in part, mostly thanks to Tigana.

And so with just over half an hour remaining France were awarded a free-kick on the edge of the Spanish penalty area. Platini’s dipping shot somehow squirmed under his body and dribbled over the line. Sheer joy for Platini, who had now scored in every match in the competition, but utter despair for the Spain captain.

Spain were now a broken side and showed little sign of putting up a fight, despite facing 10 men when France’s Le Roux was sent off after a second bookable offence on 85 minutes. But Arconada’s error had knocked the wind out of their sails and when Tigana' through-ball sent Bruno Bellone free in the last minute, the striker sealed it for France

There would be few people who could deny that France had deserved their first major trophy in international football. They may not have had the greatest forward-line in the game, with Bellone’s effort being the only goal scored by a French forward in the tournament, yet their attacking array of midfielders had more than made amends for any failings up-front.

The likes of Luis Fernandez, Jean Tigana and Alain Giresse had all contributed greatly to one of the most exciting sides Europe had ever seen while illuminating the tournament as a whole. But with nine goals in a tournament that only consisted of five games — a record that still stands today — you can’t overlook the incredible contribution of Michel Platini. It’s just a shame so few were able to witness his and his country’s great achievement on TV in the UK.