Sam Allardyce‘s appeal is as straightforward as the man himself: what you see, is what you get. Consequently, his appointment at Everton in the wake of Ronald Koeman’s miserable start and David Unsworth’s shouty attempts to turn things around didn’t lead to lofty expectations or much excitement on Merseyside.

For more than 25 years, Allardyce has trademarked a back-to-basics, hard-working and straightforward approach. Be physical at the back and get the ball forward as quickly as possible.

He does have some nuances such as a reluctance to encourage shots from outside the area due to their inefficiency which displays a football mind beyond the exaggerated caricature of 4-4-2 and hitting it down the channels. He has been repeatedly credited with leading a data-driven approach while is also mentioned as a (somewhat ironic) innovator in terms of player diet.

But under his guidance the Toffees were unlikely to achieve anything beyond survival and stability. Which, to his credit, he ensured but at some stage Allardyce has to be more than just ‘Big Sam’.

Who can blame him? It’s helped him carve out a successful managerial career and made him a very rich man, but Everton are now the third club – after Newcastle United and West Ham United – in which he’s failed to cultivate any loyalty or joy from supporters.

Premier League football is an expensive pastime for fans. They pay considerable amounts of money to watch their team home, away or on television and then factor in travel costs and merchandise. They invest more than just emotion in their club.

There’s nothing wrong with clubs striving to produce more than just results. Not every fan expects their team to be playing like Pep Guardiola’s Manchester City or Maurizio Sarri’s Napoli but they do want to look forward to a game and not have it become an expensive and time-consuming chore.

When he was Sunderland manager, Allardyce said: “All this tippy-tappy stuff – everybody keeps on going about the right way to play football – is all a load of b******s sometimes.”

Allardyce is correct, there is no “right way” to play but he’s also spectacularly missing the point. There are ways to get results and be enjoyable to watch. It doesn’t have to be “tippy-tappy”, just like it doesn’t have to be about long balls and set-pieces.

Everton, with due respect, are not Huddersfield or Brighton, teams who’s primary and secondary goal this season was to stay up. An established and prestigious top-flight club with wealthy backing and a squad full of international footballers, grinding out wins at Stoke and toiling to draws at West Brom and Swansea City should not be celebrated with any great zeal.

There is also the corporate element which, as groan-inducing as it may be, still needs to be taken into consideration. Everton are a sporting brand trying to sell their product to clients around the world. Exactly where do you begin in pitching an Allardyce-led team? Certainly not with any video footage. 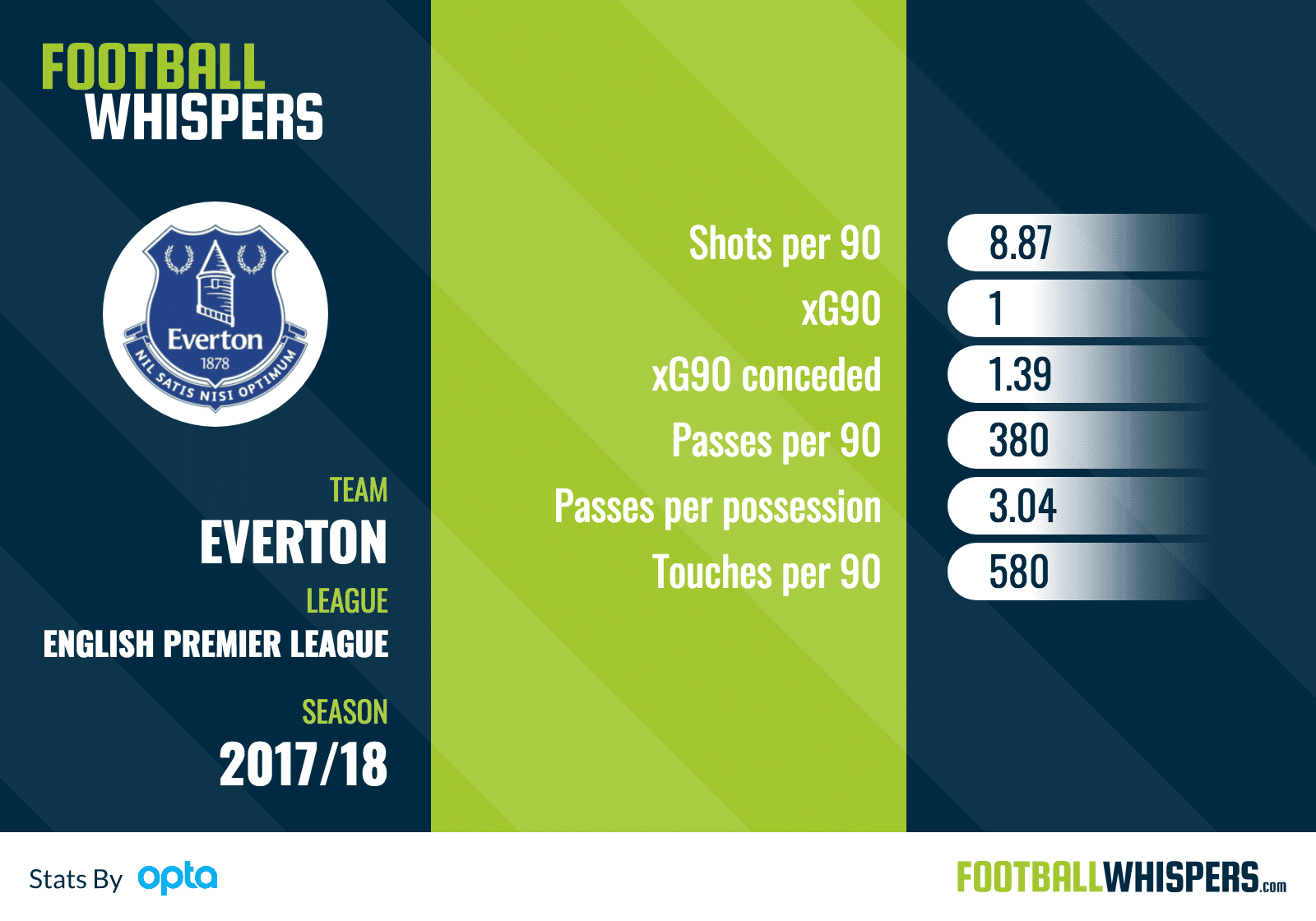 With the exception of the Terriers, all those sides are widely accepted to have endured poor seasons. In an attacking sense, Everton were their equal or even worse.

Allardyce has never been a manager who’s placed much emphasis on the pass and possession is nothing without purpose but from an aesthetic point of view, it’s nice to see a team take care of the ball and move it around the field.

One man’s meat is another man’s poison and Allardyce will point towards their 34 points in 24 games, only one fewer than Arsenal during that span, and their solid defensive numbers: seventh for tackles (16.9), third for interceptions (13.52), 14th for opposition xG (1.42) and eighth best for opposition passes per possession (3.66.

But does that, which to be honest doesn't make for spectacular reading anyway, always have to come at the expense of what happens at the other end? Moshiri clearly doesn’t think so and has made the change.

In Allardyce’s defence, Fahad Moshiri should bear a considerable amount of blame for this campaign. He should have known exactly what he was getting when hiring the former England boss.

He was never going to morph into the second coming of Marcelo Bielsa with innovative formations and attacking combinations that would dumbfound a mathematician.

It is the latest example of the lack of coherent planning at Goodison Park with last summer witnessing Moshiri, director of football Steve Walsh and Koeman all operating within their own individual transfer rules and resulting in the misshapen squad which entailed.

The statement from Everton CEO Denise Barrett-Baxendale spells it out in terms of what the club now want to achieve by associating Allardyce with the need for “stability” while in the next sentence emphasising the need for a “longer-term” plan.

As harsh a decision as it may seem, Allardyce did absolute nothing during his seven months to discourage the common-held perception of him that, what you see is what you get.