It was after Napoli‘s 2-1 defeat by Roma on Sunday that president Aurelio De Laurentiis made a decision that is threatening to impact the club's entire season.

With I Partenopei sat seventh in Serie A after the defeat, De Laurentiis ordered a week-long ritiro – the squad was to be confined at the hotel at the club's training ground for seven days.

Head coach Carlo Ancelotti disagreed with the decision, as did several senior players. Yet they went along with the president's wishes… until Tuesday night.

After Red Bull Salzburg claimed a 2-2 draw at Stadio San Paolo, the players revolted. Several returned to their homes instead of the Napoli training base. And midfielder Allan, according to Corriere dello Sport, was involved in a heated dressing-room exchange with De Laurentiis.

A statement was released the following day in which the club stated it would “protect its rights” against several of the players' behavior. And the latest is that several high-profile players could be sold.

Dries Mertens – who could become the club's all-time top scorer in the coming weeks – and José Callejón maybe offloaded when the transfer window reopens in January.

Their departures would hurt the squad but both are out of contract next summer; the winter window offers Napoli a final opportunity to receive a fee for two players.

Lorenzo Insigne‘s future is uncertain after reports surfaced that he could be stripped of the captaincy. And then there's Allan, who has been courted heavily by Paris Saint-Germain over the past year.

The Brazilian has established himself as one of Serie A's finest midfielders since his move from Udinese in 2015.

He arrived in Naples as the ultimate midfield destroyer – he won 124 tackles in the 2014/15 Serie A season, 43 more than any other player – but has evolved under the guidance of Maurizio Sarri and Ancelotti.

He is now a well-rounded midfielder. A player who can win back possession, surge upfield and open up a defence. It's why if he's available, the top Premier League side should be interested. 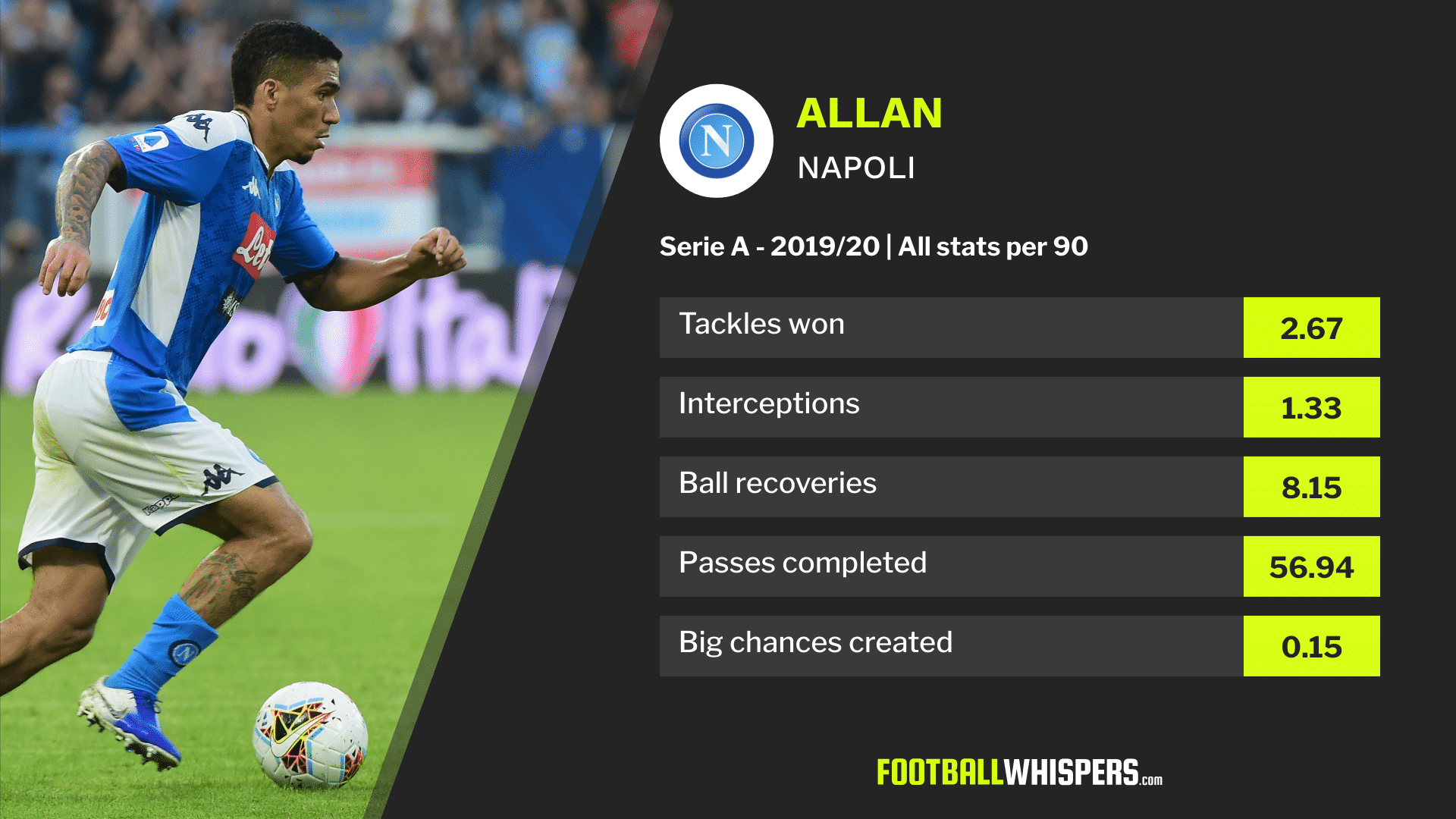 When Paris Saint-Germain registered their interest in the Brazil international they were, according to numerous reports, quoted around £50million. It is a significant fee for a 28-year-old who will have little resale value should he see out a contract at another club.

It is not, however, a fee that would scare off many of the Premier League's top six sides, especially those who need a midfield general. Allan certainly is that even if he hasn't hit peak form this term.

In Ancelotti's 4-4-2, Allan is Napoli's ball-winner. He has often been stationed alongside the more creative Fabián Ruiz and is responsible for breaking up opposition attacks and starting his own.

This season he has won the fifth-most tackles per 90 of any Serie A player (4.30) and is second for possession won in the middle third per 90 (5.49). In essence, if an attacker comes into Allan's area of the pitch, he's likely to have the ball taken from him.

Under Sarri, however, he played in a box-to-box role: it was the same position N'Golo Kanté was used in during the Italian's sole campaign at Chelsea.

Allan had a similar end product in the final third as the French star – in the 2017/18 campaign, he scored four goals and claimed four assists. They are same figures Kanté managed under Sarri.

It would be simplistic to state the two players are identical, but they do share similar traits. Allan can press relentlessly, win the ball back effectively, and start attacks intelligently. He is a player every manager would love.

It's a similar situation for Tottenham after they signed Giovani Lo Celso and Tanguy Ndombele, but there could be space if Eric Dier departs. Chelsea, meanwhile, have Kanté so have no need for Allan. And Manchester City look set after they brought in Rodri to become Fernandinho's heir.

So that leaves Manchester United and Arsenal, two Premier League giants that have fallen on hard times.

The Red Devils would hugely benefit from signing Allan. Their midfield is, to be blunt, weak. Allan would instantly improve it and, perhaps, even bring out the best of Paul Pogba, although we've heard that one before.

Arsenal, meanwhile, have required a destructive and combative midfielder for several seasons. Whether they could convince him to move to the Emirates given the club's lack of Champions League football, their current malaise and limited budget after a summer splurge, is a different issue.

What's clear is that if Allan becomes available, either in January or next summer, he won't be short of suitors. And De Laurentiis may long regret his decision to be so harsh on a Napoli squad that has achieved so much in recent years.