It’s often looked upon as something of a non-event, a token gesture, a glorified friendly that only the most diehard fans get excited about. However; the Charity Shield of 1974 was anything but.

When league champions Leeds United met FA Cup winners Liverpool on August 10th it was the first time the annual curtain raiser had been held at Wembley and should have been an occasion to remember – but it developed into a disgraceful spectacle that even now many in the game would prefer people forgot.

Nobody knew it at the time but not only was this game an appetizer for the new season, it was also something of a precursor to what was to come and like the campaign as a whole the match would finish with a number of significant absentees.

Leeds manager Don Revie had left Elland Road that summer to take the England job and, after a decade-and-a-half at Anfield, Bill Shankly had decided to step down as Liverpool manager. This gave what was usually a pretty tame affair something of an edge before the season proper had even begun in earnest as the two best teams in the land prepared to face each other.

Violence in football was rife in 1974. There were fights on the terraces, on the streets outside the grounds, on the trains, on the buses, pitch invasions were common place and now  aggression was even finding its way onto the field of play in the form of the game’s more high-profile participants.

There was little sign of any animosity prior to kick-off however.  As a fitting tribute, the Liverpool team was led out onto the Wembley pitch by their soon-to-be retired manager and club legend, Bill Shankly, who was making way for his ‘Boot Room' understudy Bob Paisley to take control of the club.

Marching out in front of the Leeds United side meanwhile was the recently appointed and ferociously outspoken ex-Derby County boss Brian Clough in his first game in charge as manager of the Yorkshire club. 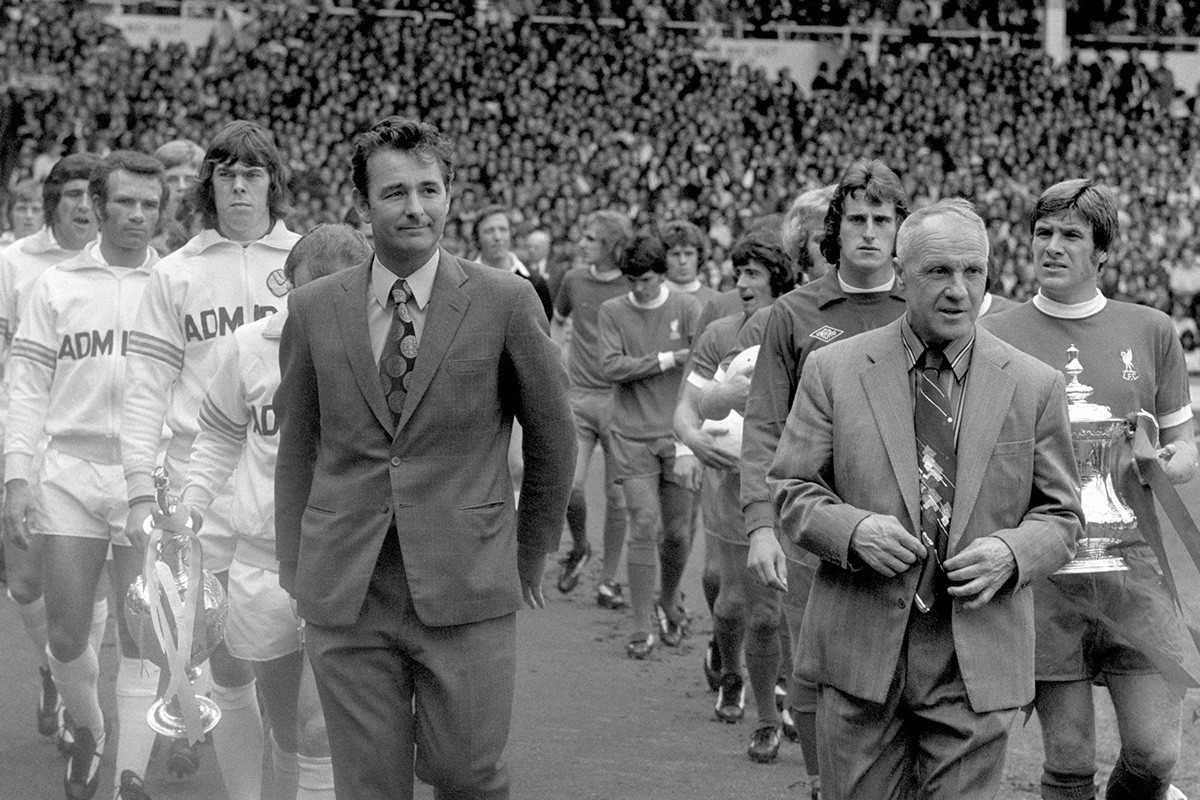 Leeds and Liverpool had their fair share of battles down the years, but it is doubtful that there had ever been an angrier or more ill-tempered encounter than this one. Straight from kick-off, it was clear that there was little love lost between the two sides as what football was on show was dominated by silly fouls and arguments.

Leeds were known throughout the land for their hard tackling and love of letting their opponents know they were in a battle. The likes of Johnny Giles, Norman Hunter, Billy Bremner and Joe Jordan were feared by opponents throughout the land; not just for their prowess on the ball; but the way they conducted themselves off it too.

Liverpool on the other hand were famed for their skill, flair and passing ability, yet they had their own hard men like Tommy Smith who weren’t afraid to get stuck-in. “The players expected a battle, even if the FA didn't. We had players who could look after themselves, and so did Leeds,” explained Smith some years later.

Kevin Keegan in-particular had been singled-out for punishment by the Leeds players from the outset, persistently being fouled and kicked throughout the first half and as the second half began things continued in the same vein. It was only a matter of time before things got out of hand.

And on 60 minutes came the incident that would forever define this unsavoury encounter when Keegan, furious that he had been clattered, lashed out. He cut right through Billy Bremner to get to a loose ball and sent the Scotsman sprawling before after Johnny Giles like a man possessed. Giles responded in the only way that he knew, despatching a fierce right-hook to the face of the Liverpool forward and knocking him to the ground.

Incredibly Giles only received a booking for his actions as Keegan lay on the floor nursing his jaw. However, the fuse had well and truly been ignited and it was only a matter of time before Keegan exacted his revenge.

The resulting free-kick broke down and as the ball was cleared into the Liverpool half Keegan saw his chance to strike out at his nearest opponent, who happened to be Billy Bremner, catching him in the face as the two traded blows, out of sight of the TV cameras but right under the nose of the referee.

““This is just what English football did not want to see. What do the players think they are doing?” asked Barry Davies who was the commentator on this, the first Wembley Charity Shield to be televised around the world. 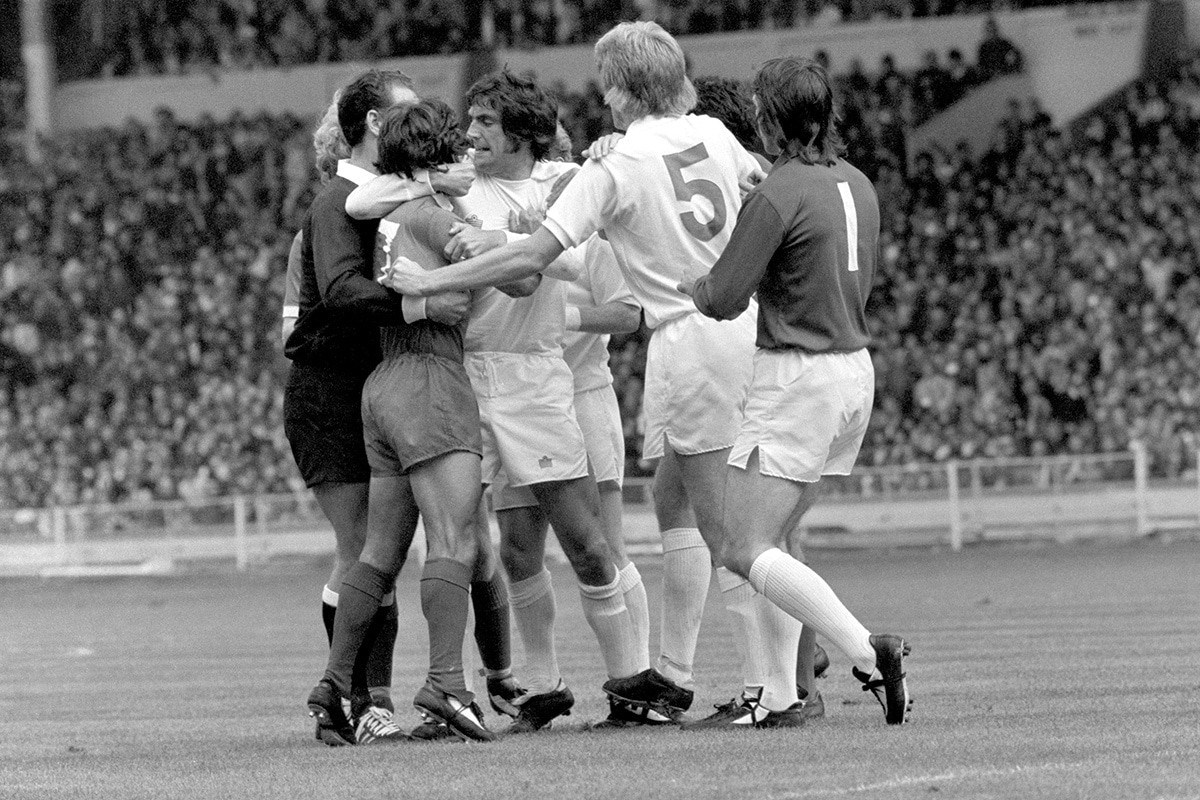 This time referee Mr Matthewson wasn’t so lenient and ordered both Keegan and Bremner off as scuffles broke-out amongst the other players. Annoyed that they had both been sent off, the pair, for reasons only known to them, threw their shirts to the ground and walked from the pitch bare-chested as they became the first British players in the history of Wembley Stadium to be sent off.

Such was the outrage at the players’ behaviour that questions were even asked about the incident in parliament, but for one of the players involved that day the ugly scenes were born purely out of frustration rather than being the result of some pre-meditated vendetta.

“It was pure frustration from Billy and Kevin,” Leeds Striker Joe Jordan told the Daily Mail. “I played with both and I know the admiration they had for each other as professionals.

“Our teams were the best two. We were the main contenders for the title and we were confident it would remain like that for the future. So although it was no more than a friendly, it was a prestige match that meant both of us would be trying to prove a point. If there was an issue, then that was it.”

It had also been well documented that, when Brian Clough had arrived at Ellend Road to replace the much revered Don Revie a matter of weeks earlier, he had been more than critical of Leeds’s style of play and their willingness to play dirty; something that Jordan feels might have fanned the flames.

“There was certainly an undercurrent at Leeds caused by the departure of our manager, Don Revie, to take over the England job,” explains Jordan. “I guess that was compounded by the shock at the arrival of Brian Clough.”

It had been seen as an event intended to show-off everything that was good about English football to a worldwide television audience of millions; but as it turned out it had become a bruising, niggling affair, which ended in a 1-1 stalemate.

Liverpool's Tommy Smith and Leeds’ Johnny Giles were booked and Liverpool eventually won 6-5 on penalties. Clough even asked goalkeeper David Harvey to take a spot-kick, which he subsequently missed. 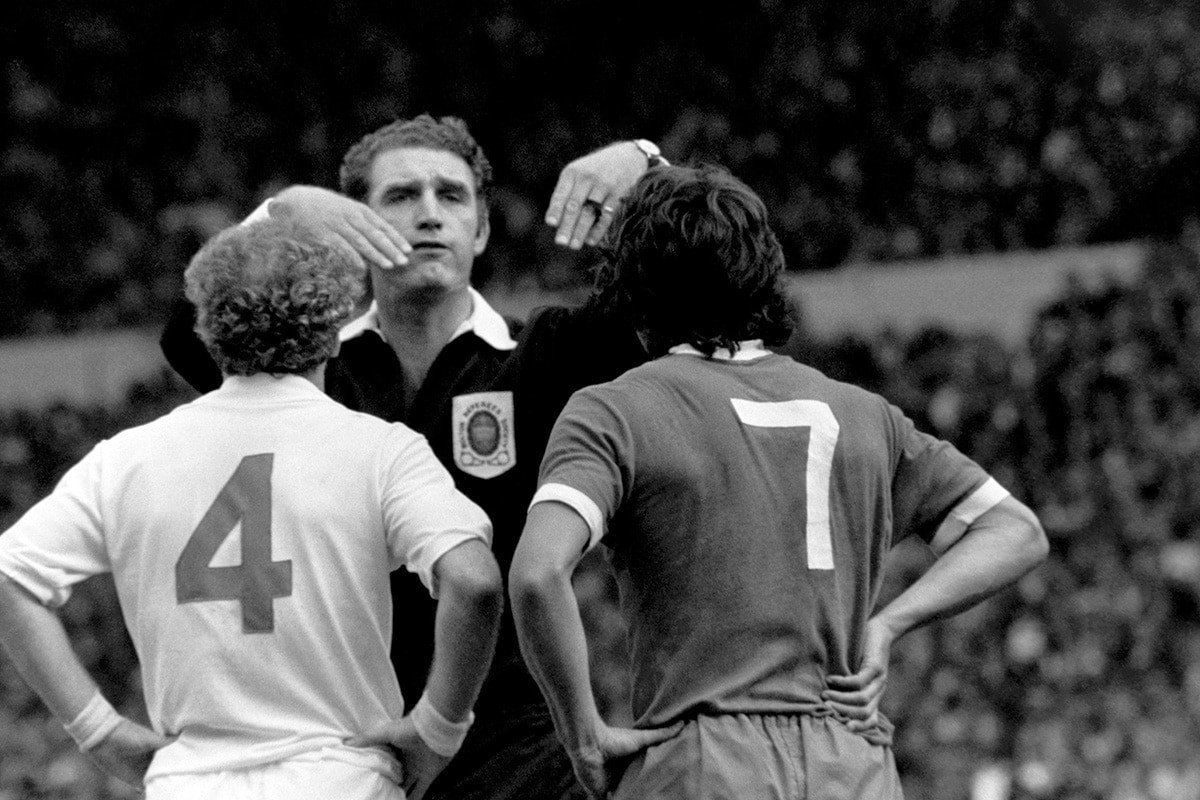 The final whistle and Liverpool’s rather muted celebrations wasn’t the end of the matter though. “Football itself has been dragged shamefully through the mud, leaving all thoughtful people to fear for its future,” wrote Geoffrey Green in The Times the following day as public outrage grew.

“The final responsibility rests with all the directors and managers and they should share the penalty,” he went on. “The harder they are hit where it hurts most, the better – either through their pockets with heavy fines or by deducting points from a club’s league total. That might make everybody think twice.”

For one Times reader that was simply not enough. Tony Barlow from Epsom even applied for a summons to be taken out on the pair by using the public order act for: “behaviour likely to cause a breach of the peace.” Magistrates saw sense, thank goodness, and turned his application down.

The FA did share Green’s more lenient views and Bremner and Keegan were eventually fined £500 each and banned for two months, which would see them miss 11 games each. Rather hefty punishment in an era where good players were lucky to earn £200 a week.

It was perhaps ironic that Clough's open hostility towards what he believed was the overly-aggressive style adopted by Leeds under Revie would quickly turn into contempt for his Elland Road squad, something that would ultimately decide his fate as just 44 days after his arrival he was sacked following a poor run of results and a player revolt.

In a largely forgettable period for both club and manager it’s probably fitting that the most memorable incident of Clough’s tenure would be remembered for all the wrong reasons. Leeds would have to wait another 18 years before winning the league title again, while Liverpool’s transition of power from Shankly to Paisley was seamless; providing one of the most successful periods in the club’s history.

However, the events of August 10th 1974 would live long in the memory of players and supporters of both clubs for much of this period and would provide a back-drop to one of the most violent and turbulent periods in English football, both on and off the pitch.