Liverpool are in the market for a goalkeeper. So say a number of outlets who, over recent days, have claimed Jürgen Klopp is interested in Jan Oblak, Jack Butland and Alisson.

The rumours surrounding the last name on that list have intensified recently with Gazzetta dello Sport reporting Liverpool and Paris Saint-Germain are interested in the Roma stopper and that a bid in the region of £40million would be enough to convince the Serie A side to part ways with the Brazilian.

The 25-year-old shot-stopper has said he will assess his options at the end of the season.

But, in a report by Miguel Delaney of The Independent, it was revealed the Reds are looking to bring in a No.1 this month and that interest in Oblak had waned after Atlético Madrid made it clear they'd not sell for less than his £100million release clause.

And while the Football.London exclusive suggested Butland preferred a move to Anfield over Stamford Bridge, the report goes on to say any deal would be a summer one. With Stoke City in a relegation battle they won't want to sell their first-choice keeper this month.

By process of elimination that leaves Alisson. We've taken a look at how the 25-year-old compares to current No.1 at Anfield, Simon Mignolet. 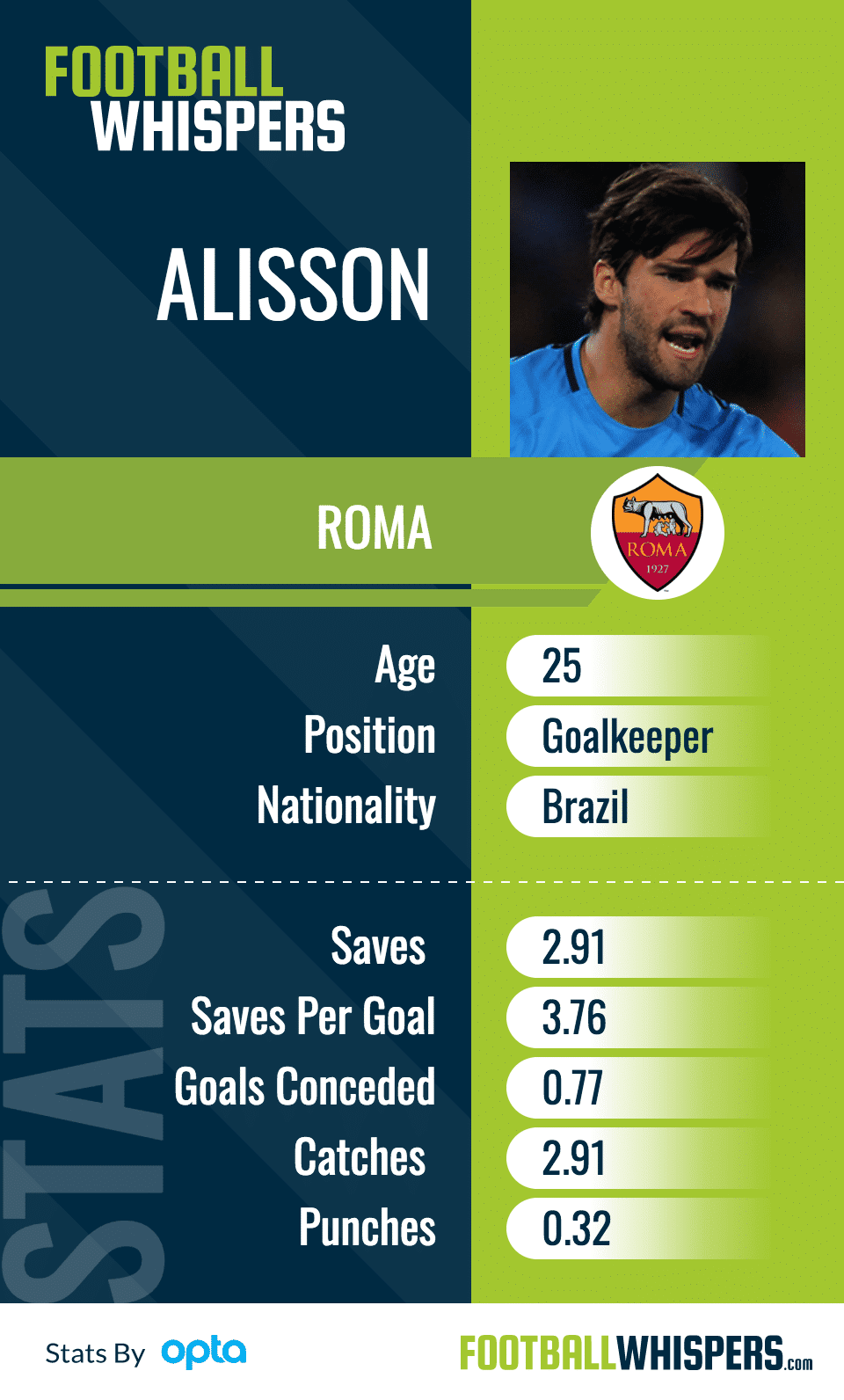 It's never ideal to compare goalkeeper stats, especially when it's such a small sample size. It's not fair and a lot depends on the players ahead of them. For example, if you're peppered with shots then you're likely going to be making more saves per 90 minutes and have a better saves per goal stat.

Whereas if you play behind a defence that makes a lot of blocks and you're rarely tested your stats will look worse. Are you a bad keeper just because you're playing behind a really good defensive unit?

However, you can use these stats to help paint a bit of a picture. Especially the stat looking at saves per goal.

The opposition, on average, have 7.8 shots per game against Liverpool – the second lowest amount in the Premier League and the third fewest in Europe – while Roma are having to deal with 11.9 shots per 90 minutes – the sixth fewest in Serie A.

The shots faced stat doesn't take into account the quality of the shot. So, for that we use expected goals against (xGA) which looks at exactly that. Stats courtesy of understat.com.

Roma have conceded 17 goals in Serie A and have the best defensive record in Italy. It's even more impressive when you realise their xGA has them at 25.11.

Only two teams in England are outperforming their xGA more than Roma and it's Manchester United and Burnley. What do both Premier League clubs have in common? Their goalkeepers are often praised for single-handedly keeping them in matches.

In contrast, Liverpool are underperforming on their xGA. Not by much, they've conceded 29 this season and they're xGA is 24.3, but it's perhaps the difference between a battle for fourth and a battle for second this season.

Mignolet is facing fewer shots and making fewer big saves than Alisson. He also seems ideally suited to the Liverpool team in terms of profile. He's quick off his line, he's confident with the ball at his feet and he can pick an early pass. Far too often the Liverpool No.22 slows play down by dithering on the ball and it kills off a potential counter-attack.

The Brazilian would be an upgrade on the Belgian. However, you do have to factor in that this is the former Internacional man's first season as first-choice keeper in Europe. Is this just a good run of form? Can he sustain it would be the next question? And, finally, is he worth £40million?

Liverpool are close to having a team good enough to compete with Pep Guardiola's Manchester City. They're perhaps just a reliable goalkeeper away from it, in fact. Alisson is worth the gamble.